Mícheál Ó Muircheartaigh born 20 August 1930) was an Irish Gaelic games commentator for the Irish national radio and television, RTÉ. In a career that has spanned six decades he has come to be regarded as the “voice of Gaelic games.” and one of the countrys most revered and best loved public figures.His prolific career has earned him a place in Guinness World Records.

On 16 September 2010 he announced his retirement from broadcasting. The last All-Ireland he commentated on was the 2010 All-Ireland Senior Football Championship Final on 19 September 2010. On 29 October 2010 it was announced that the 2nd International Rules test at Croke Park would be Ó Muircheartaigh’s final broadcast as commentator on RTÉ Radio 1. On 30 October 2010 Micheál commentated his final commentary alongside RTÉ’s pundit and former Meath footballer Bernard Flynn.

He was contracted to officiate at the 2011–12 Volvo Ocean Race finish in Galway when he commentated on the finish to the round the world race, to give it a uniquely Irish conclusion. Sailing has been a long time hobby of O Muircheartaigh.

Ó Muircheartaigh was invited to read out a piece in Irish and in English at an event called “Laochra” in Croke Park on 24 April 2016 to commemorate the 100th anniversary of the Easter Rising.He is the main commentator in the 2005 video game Gaelic Games: Football for the PlayStation 2 and its 2007 sequel 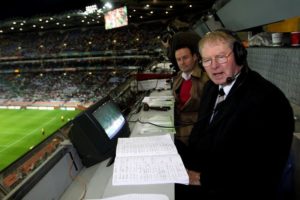 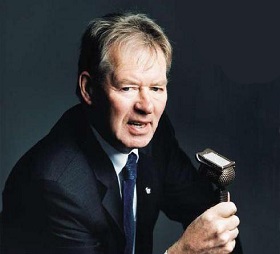 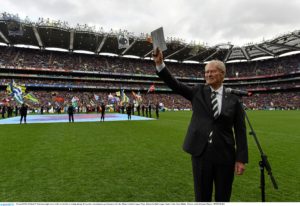