Aer Lingus was founded on 15 April 1936, with a capital of £100,000. Its first chairman was Seán Ó hUadhaigh.Pending legislation for Government investment through a parent company, Aer Lingus was associated with Blackpool and West Coast Air Services which advanced the money for the first aircraft, and operated with Aer Lingus under the common title “Irish Sea Airways”. Aer Lingus Teoranta was registered as an airline on 22 May 1936.The name Aer Lingus was proposed by Richard F O’Connor, who was County Cork Surveyor, as well as an aviation enthusiast.

A DH.84 Dragon, repainted in the livery of Aer Lingus’ original aircraft “Iolar”.

On 27 May 1936, five days after being registered as an airline, its first service began between Baldonnel Airfield in Dublin and Bristol (Whitchurch) Airport, the United Kingdom, using a six-seater de Havilland DH.84 Dragon biplane (registration EI-ABI), named Iolar (Eagle).

Later that year, the airline acquired its second aircraft, a four-engined biplane de Havilland DH.86 Express named “Éire”, with a capacity of 14 passengers. This aircraft provided the first air link between Dublin and London by extending the Bristol service to Croydon. At the same time, the DH.84 Dragon was used to inaugurate an Aer Lingus service on the Dublin-Liverpool route.

The airline was established as the national carrier under the Air Navigation and Transport Act (1936). In 1937, the Irish government created Aer Rianta (now called Dublin Airport Authority), a company to assume financial responsibility for the new airline and the entire country’s civil aviation infrastructure. In April 1937, Aer Lingus became wholly owned by the Irish government via Aer Rianta.

The airline’s first General Manager was Dr J.F. (Jeremiah known as ‘Jerry’) Dempsey, a chartered accountant, who joined the company on secondment from Kennedy Crowley & Co (predecessor to KPMG as Company Secretary in 1936 (aged 30) and was appointed to the role of General Manager in 1937. He retired 30 years later in 1967 at the age of 60.

In January 1940, a new airport opened in the Dublin suburb of Collinstown and Aer Lingus moved its operations there. It purchased a new DC-3 and inaugurated new services to Liverpool and an internal service to Shannon. The airline’s services were curtailed during World War II with the sole route being to Liverpool or Barton Aerodrome Manchester depending on the fluctuating security situation.

On 9 November 1945, regular services were resumed with an inaugural flight to London. From this point Aer Lingus aircraft, initially mostly Douglas DC-3s, were painted in a silver and green livery. The airline introduced its first flight attendants.

In 1946, a new Anglo-Irish agreement gave Aer Lingus exclusive UK traffic rights from Ireland in exchange for a 40% holding by British Overseas Airways Corporation (BOAC) and British European Airways (BEA). Because of Aer Lingus’ growth the airline bought seven new Vickers Viking aircraft in 1947, however, these proved to be uneconomical and were soon sold.

A Bristol 170 Freighter at Manchester Airport in 1953.

In 1947, Aerlínte Éireann came into existence to operate transatlantic flights to New York City from Ireland. The airline ordered five new Lockheed L-749 Constellations, but a change of government and a financial crisis prevented the service from starting. John A Costello, the incoming Fine Gael Taoiseach (Prime Minister), was not a keen supporter of air travel and thought that flying the Atlantic was too grandiose a scheme for a small airline from a small country like Ireland.

A Vickers Viscount 808 in “green top” livery at Manchester Airport in 1963.

During the late 1940s and early 1950s, Aer Lingus introduced routes to Brussels, Amsterdam via Manchester and to Rome. Because of the expanding route structure, the airline became one of the early purchasers of Vickers Viscount 700s in 1951, which were placed in service in April 1954. In 1952, the airline expanded its all-freight services and acquired a small fleet of Bristol 170 Freighters, which remained in service until 1957.

Prof. Patrick Lynch was appointed the chairman of Aer Lingus and Aer Rianta in 1954 and served in the position until 1975. In 1956, Aer Lingus introduced a new, green-top livery with a white lightning flash down the windows and the Irish flag displayed on the fin.

A Boeing 720 in Aer Lingus-Irish International livery in 1965.

Aer Lingus bought seven Fokker F27 Friendships, which were delivered between November 1958 and May 1959. These were used in short-haul services to the UK, gradually replacing the Dakotas, until Aer Lingus replaced them in 1966 with secondhand Viscount 800s.

The airline entered the jet age on 14 December 1960 when it received three Boeing 720 for use on the New York route and the newest Aer Lingus destination Boston.

In 1963, Aer Lingus added Aviation Traders Carvairs to the fleet. These aircraft could transport five cars which were loaded into the fuselage through the nose of the aircraft. The Carvair proved to be uneconomical for the airline partly due to the rise of auto ferry services, and the aircraft were used for freight services until disposed of.

The Boeing 720s proved to be a success for the airline on the transatlantic routes. To supplement these, Aer Lingus took delivery of its first larger Boeing 707 in 1964, and the type continued to serve the airline until 1986.

Conversion of the European fleet to jet equipment began in 1965 when the BAC One-Eleven started services on continental Europe.The airline adopted a new livery in the same year, with a large green shamrock on the fin. In 1966, the remainder of the company’s shares held by Aer Rianta were transferred to the Minister for Finance.

An Aviation Traders Carvair that was used as a vehicle freighter is seen loading a car at Bristol Airport in 1964.

In 1966, the company added routes to Montreal and Chicago. In 1968, flights from Belfast, in Northern Ireland, to New York City started, however, it was soon suspended due to the beginning of the Troubles.Aer Lingus introduced Boeing 737s to its fleet in 1969 to cope with the high demand for flights between Dublin and London. Later, Aer Lingus extended the 737 flights to all of its European networks.

In 1967, after 30 years of service, General Manager Dr J.F. Dempsey signed the contract for the airline’s first two Boeing 747 aircraft before he retired later that year. 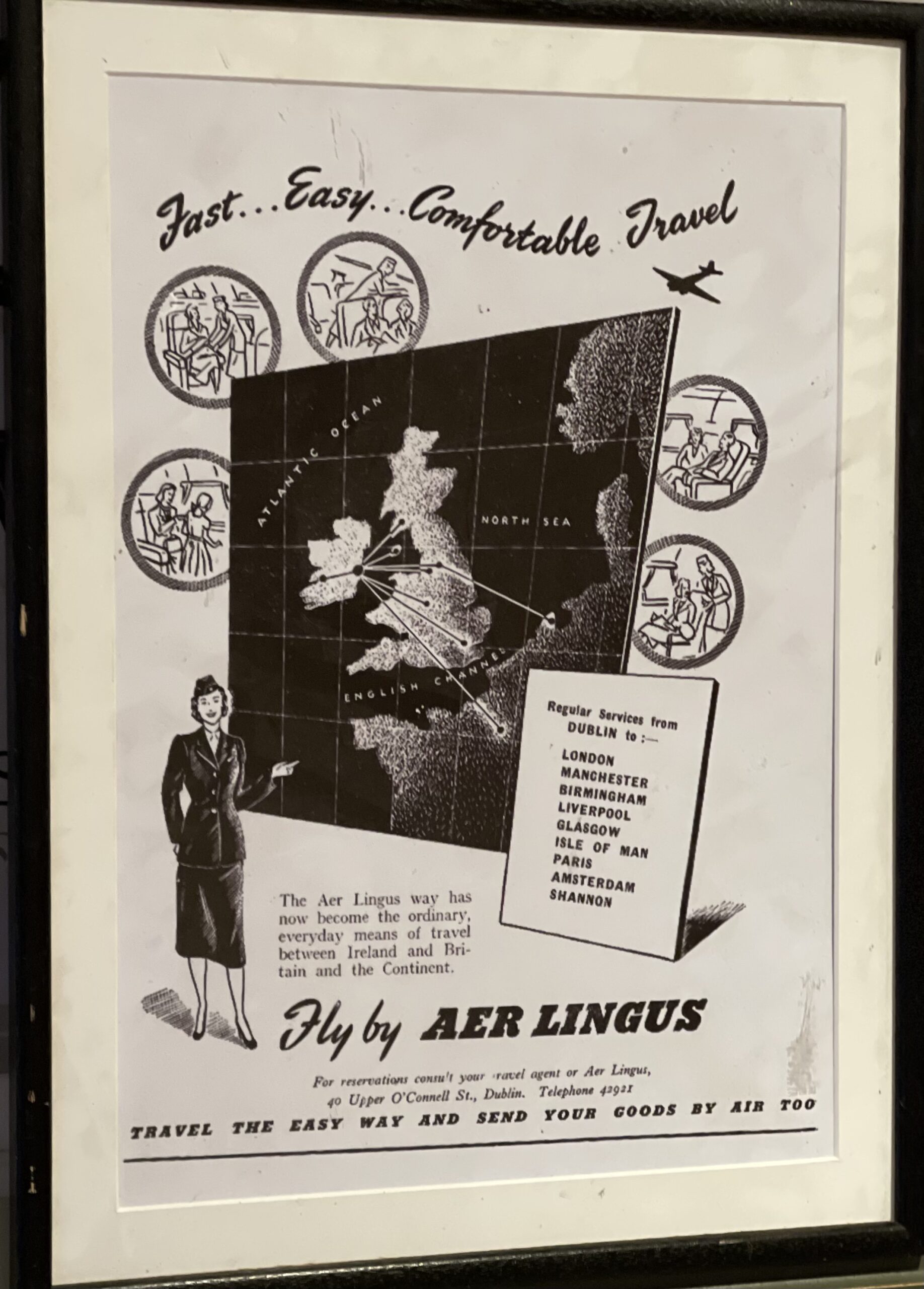 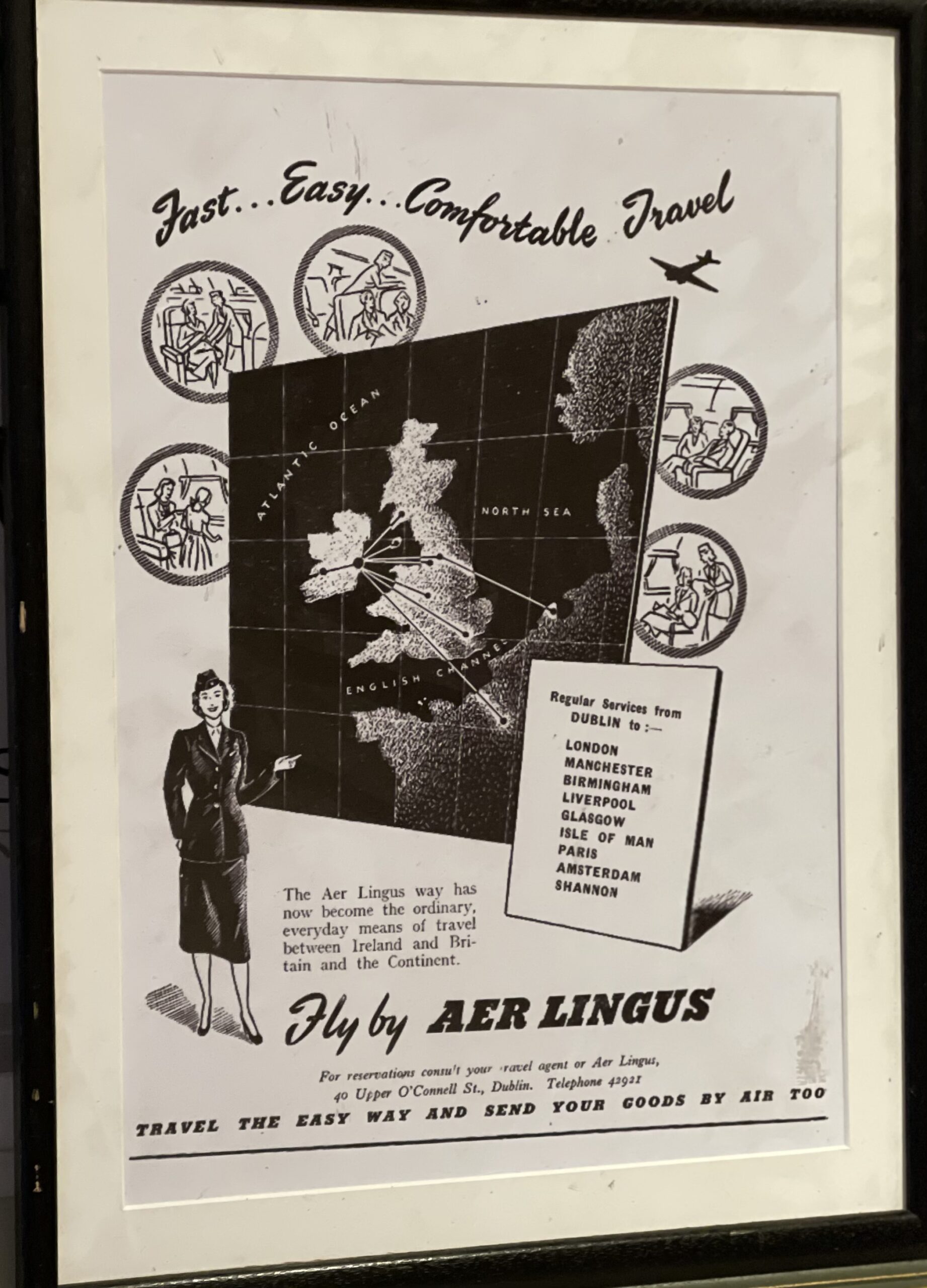 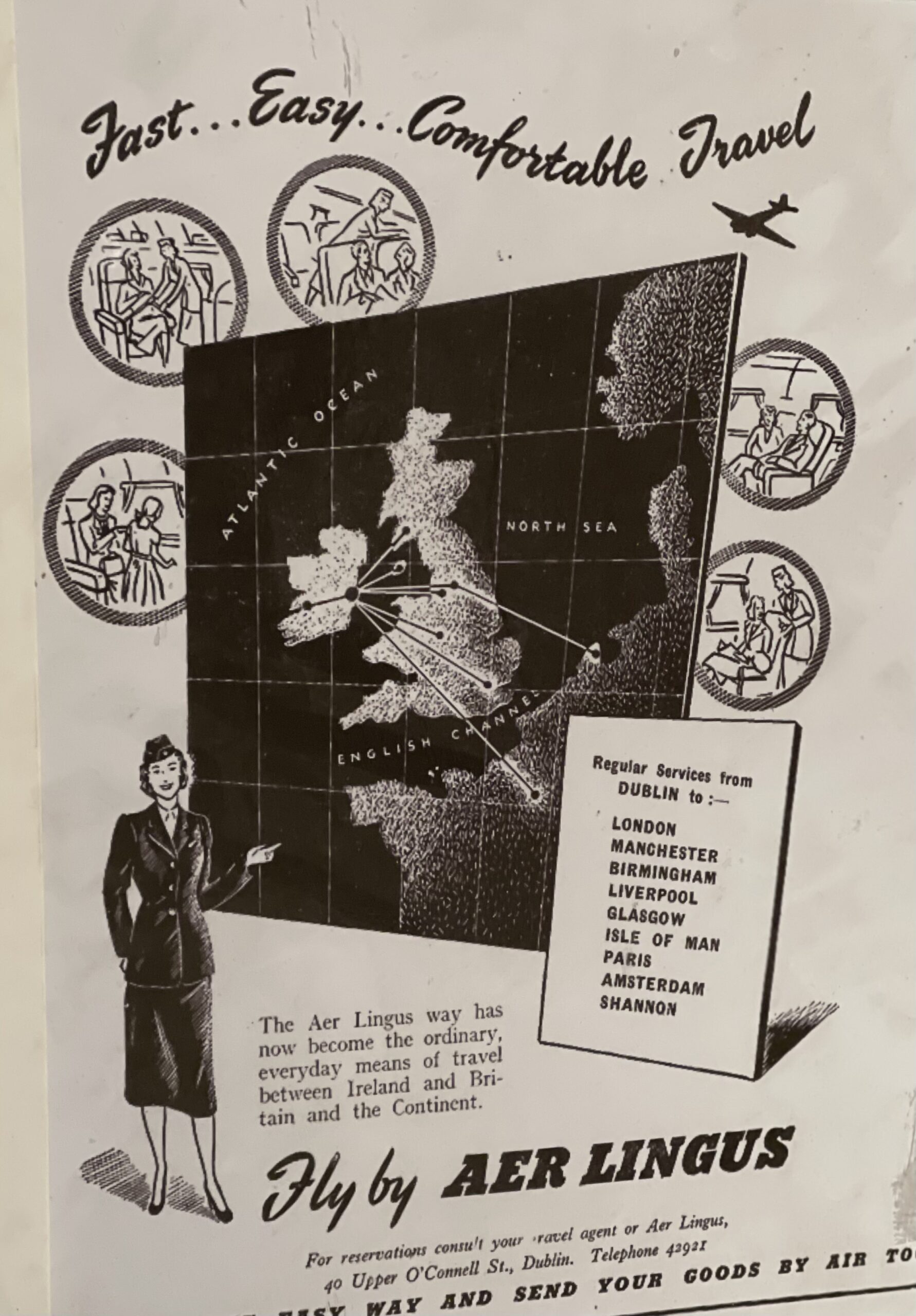 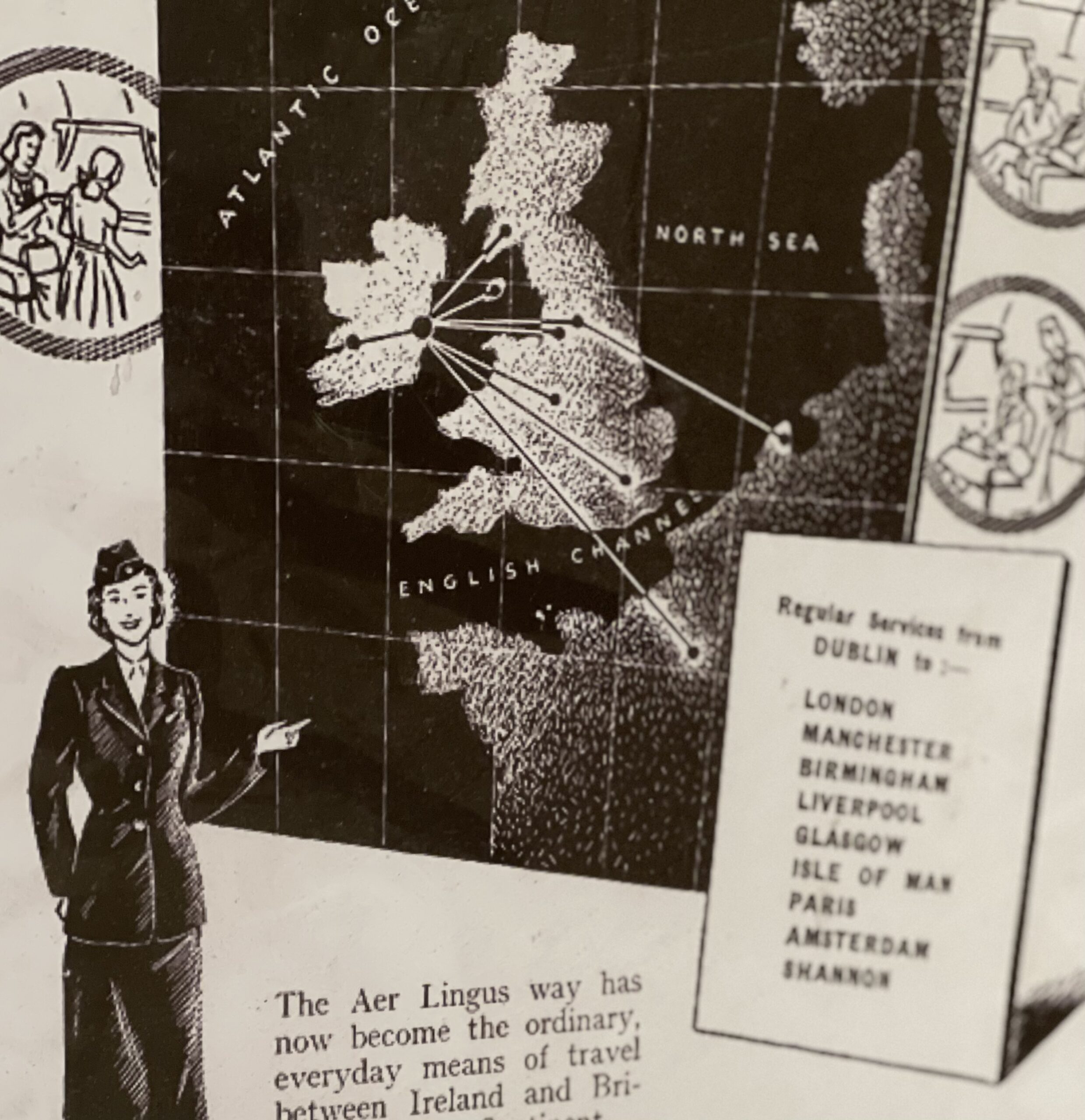 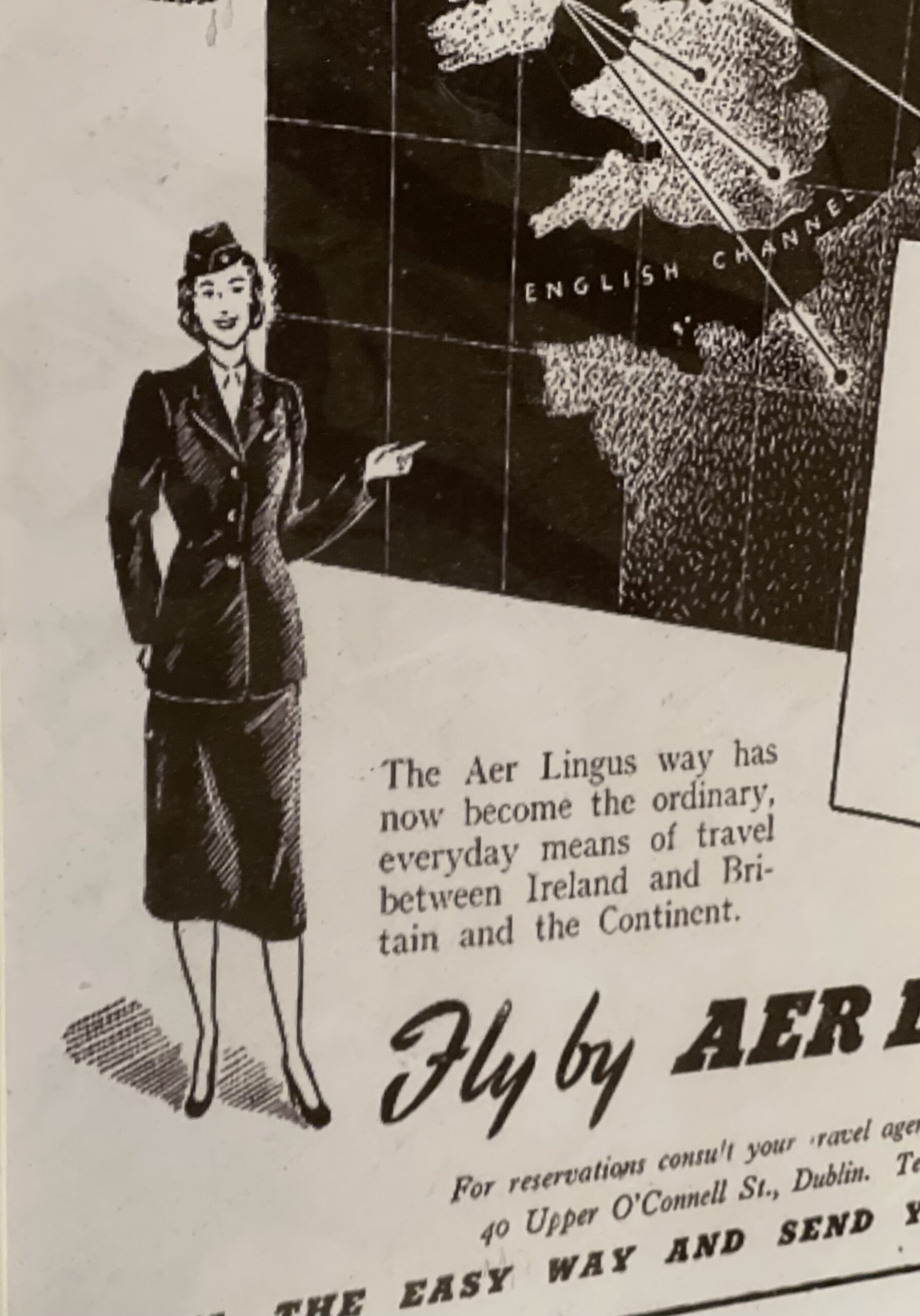