The most haunting and poignant image of Irish involvement in the first World War is at the centre of an unsolved art mystery.

The Last General Absolution of the Munsters at Rue du Bois – a painting long presumed lost – depicts soldiers of the Royal Munster Fusiliers regiment receiving “general absolution” from their chaplain on the eve of battle in May 1915. Most of them died within 24 hours.

The painting, by Italian-born war artist Fortunino Matania, became one of the most famous images of the war when prints of it were published in illustrated weekly newspapers.

Copies hung in houses & pubs throughout Ireland, and especially Munster, but, as Irish public opinion towards the war changed, the picture gradually disappeared from view.A copy still hangs in the famous pub Larkins of Garrykennedy Co Tipperary to this day.

Centenary commemorations of the first World War have prompted renewed interest in the whereabouts of the original painting among art and military historians.

A widely held theory that the painting was lost when archives were destroyed in a fire during the blitz of London in 1940 is “very much” doubted by English historian Lucinda Gosling, who is writing a book about the artist.

She told The Irish Times there was no definitive proof to confirm this theory and it was possible the original painting was still “out there”.

The painting could, conceivably, be in private hands or, more improbably, be lying forgotten or miscatalogued in a museum’s storage area. Matania’s work occasionally turns up at art auctions, but there has been no known or publicly-documented sighting of the original Munsters painting.

Ms Gosling described Matania as an artist “able to work at great speed, producing pictures that were unnervingly photographic in their realism”.

His pictures, she said, had “reached and influenced millions” and “he combined skill and artistry with a strong streak of journalistic tenacity”.

The painting is based on an event that took place on Saturday evening, May 8th, 1915.

Soldiers from the Second Battalion, Royal Munster Fusiliers, commanded by Lieut-Col Victor Rickard, paused beside a wayside shrine near the village of Rue du Bois in northwest France. The following day, they were due to go into battle, in what became known as the Battle of Aubers Ridge.

The painting is imbued with a sense of impending doom.

In Catholic canon law, a priest may grant general absolution of sin to a gathering of the faithful where there is imminent danger of death and no time for individual confessions.

The ritual was used on September 11th, 2001, in New York to grant general absolution to police officers and firefighters about to enter the Twin Towers of the World Trade Centre.

In the painting, the Irish chaplain Fr Francis Gleeson is shown blessing the men: “Misereatur vestri omnipotens Deus; et dimissis omnibus peccatis vestris, perducat vos Iesus Christus ad vitam aeternam” (May Almighty God have mercy on you, and having forgiven all your sins, may Jesus Christ bring you to life everlasting).

The men then sang the hymns Te Deum and Hail Glorious St Patrick.

The artist was not present at the scene but based his painting on a written account by Lieut- Col Rickard’s widow, Jessie, who is believed to have commissioned the painting in memory of her husband.

She had gathered eye-witness accounts from survivors and wrote: “There are many journeys and many stopping- places in the strange pilgrimage we call life, but there is no other such journey in the world as the journey up a road on the eve of battle, and no stopping- place more holy than a wayside shrine.”

She noted among the troops were “lads from Kerry and Cork, who, a year before, had never dreamed of marching in the ranks of the British army”.

After Fr Gleeson’s blessing, she wrote: “The regiment moved on, and darkness fell as the skirl of the Irish pipes broke out, playing a marching tune.

“The Munsters were wild with enthusiasm; they were strong with the invincible strength of faith and high hope, for they had with them the vital conviction of success, the inspiration that scorns danger – which is the lasting heritage of the Irish; theirs still and theirs to remain when great armaments and armies and empires shall be swept away, because it is immovable as the eternal stars.”

The following morning, Sunday May 9th, most of the Irish soldiers were mown down by German gunfire and shelling.

On a catastrophic day for the British army – over 11,000 casualties – the Royal Munster Fusiliers suffered dreadful losses. Exact estimates vary, but one account records 800 Munsters went into battle and only 200 assembled that evening.

Mrs Rickard concluded : “So the Munsters came back after their day’s work; they formed up again in the Rue du Bois, numbering 200 men and three officers. It seems almost superfluous to make any further comment.”

The Last General Absolution of the Munsters at Rue du Bois

The Last General Absolution of the Munsters at Rue du Bois shows some of the hundreds of soldiers from the second battalion of the Royal Munster Fusiliers who gathered at a shrine near the village of Rue du Bois on the western front on Saturday, May 8th, 1915.

The image was published in the London illustrated weekly newspaper The Sphere in November 1916, and in 1917 in the Weekly Freeman’s, an Irish publication. There are copies of the print in various museums and in private ownership in Ireland and Britain.

Fortunino Matania, (1881- 1963) was born in Naples and was a well-known artist and illustrator in Italy before moving to London in 1902. He worked for The Sphere – an illustrated weekly newspaper – and became famous for depicting the sinking of the Titanic in 1912.

He was an official war artist in the first World War and his graphic illustrations of trench warfare were highly renowned.

Rue du Bois is located near the village of Neuve Chapelle in the Nord-Pas-de-Calais region of France close to the border with Belgium. According to the Royal Munster Fusiliers Association, the original shrine has long gone.

Depicted on horseback, with hand raised granting general absolution, is Fr Francis Gleeson, a native of Templemore, Co Tipperary. He was ordained a priest in Maynooth in 1910 and volunteered to serve as a chaplain in the army at the outbreak of the war. He was assigned to the Royal Munster Fusiliers and served with distinction. He survived the war and returned to Ireland where he worked as priest in Dublin and died in 1959.

Lieut-Col Victor Rickard, the other man on horseback, was born in Englandto an Irish father and English mother.

He was the commander of the battalion. He died in action the next day, aged 40.

Lieut-Col Rickard’s widow Jessie, who is believed to have commissioned the painting, was the daughter of a Church of Ireland clergyman who spent her youth in Mitchelstown, Co Cork. She became a well-known novelist and published some 40 books.

After the war she converted to Catholicism under the guidance of another former chaplain in the British army in the first World War – Fr Joseph Leonard, who later befriended Jackie Kennedy. 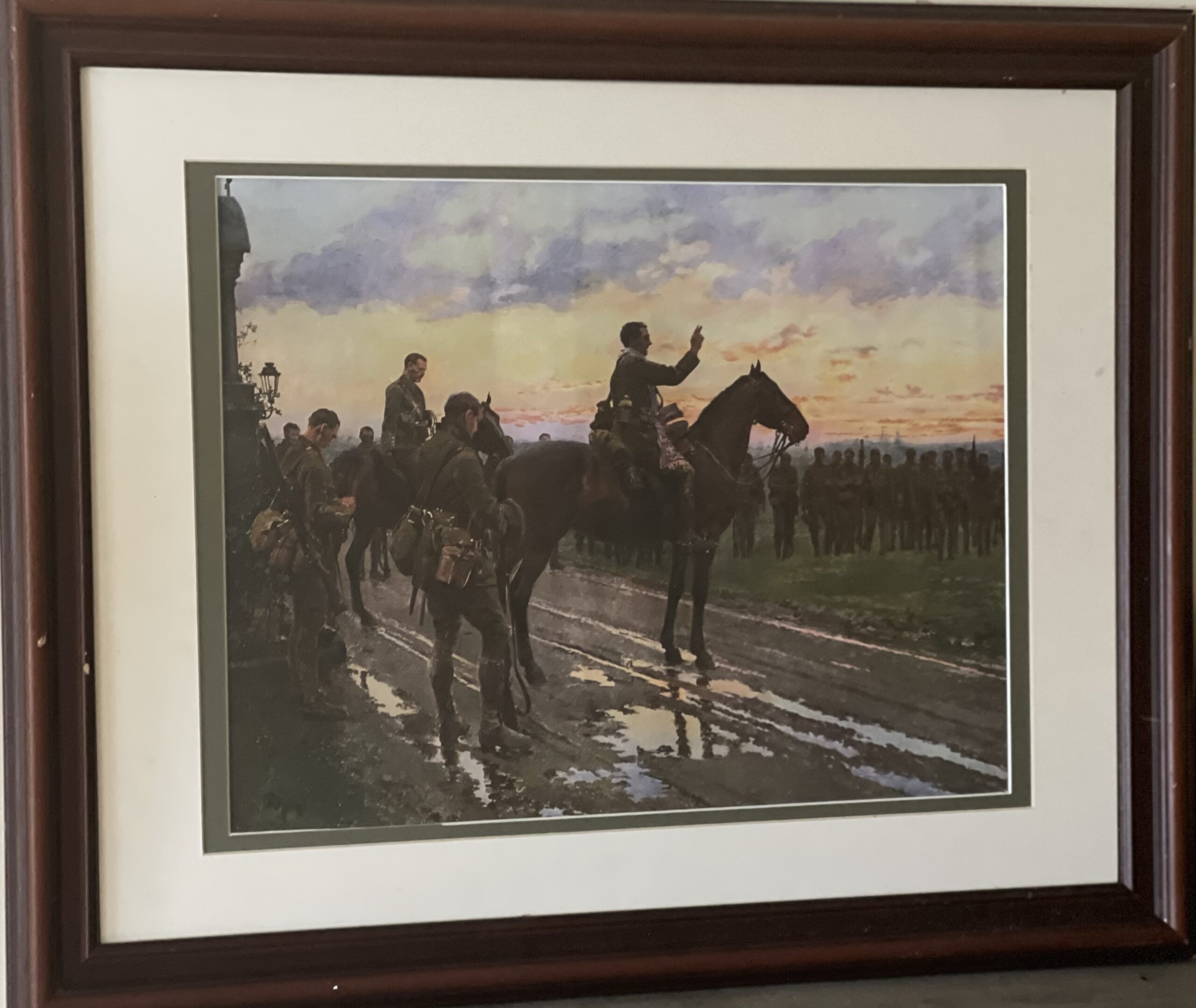 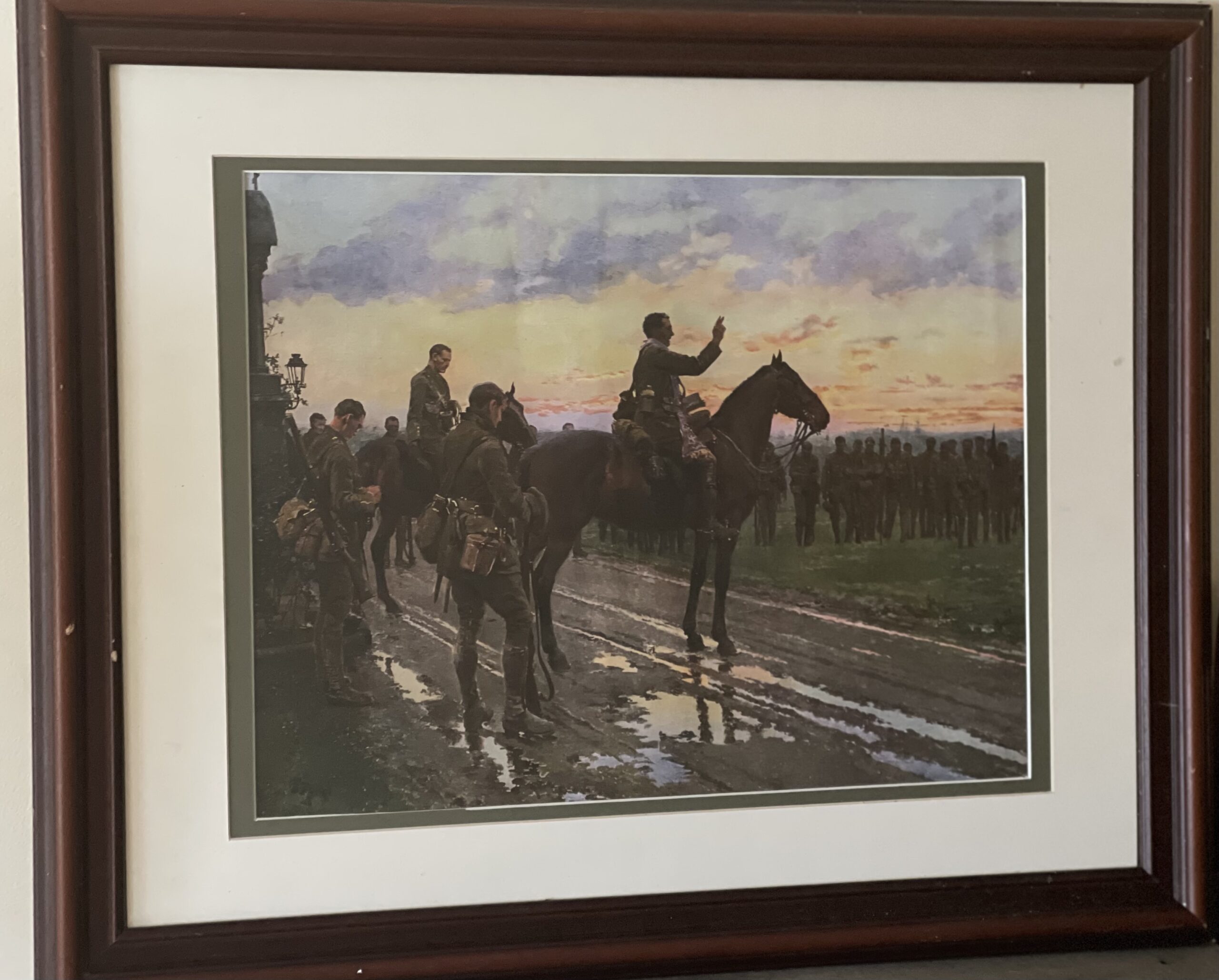 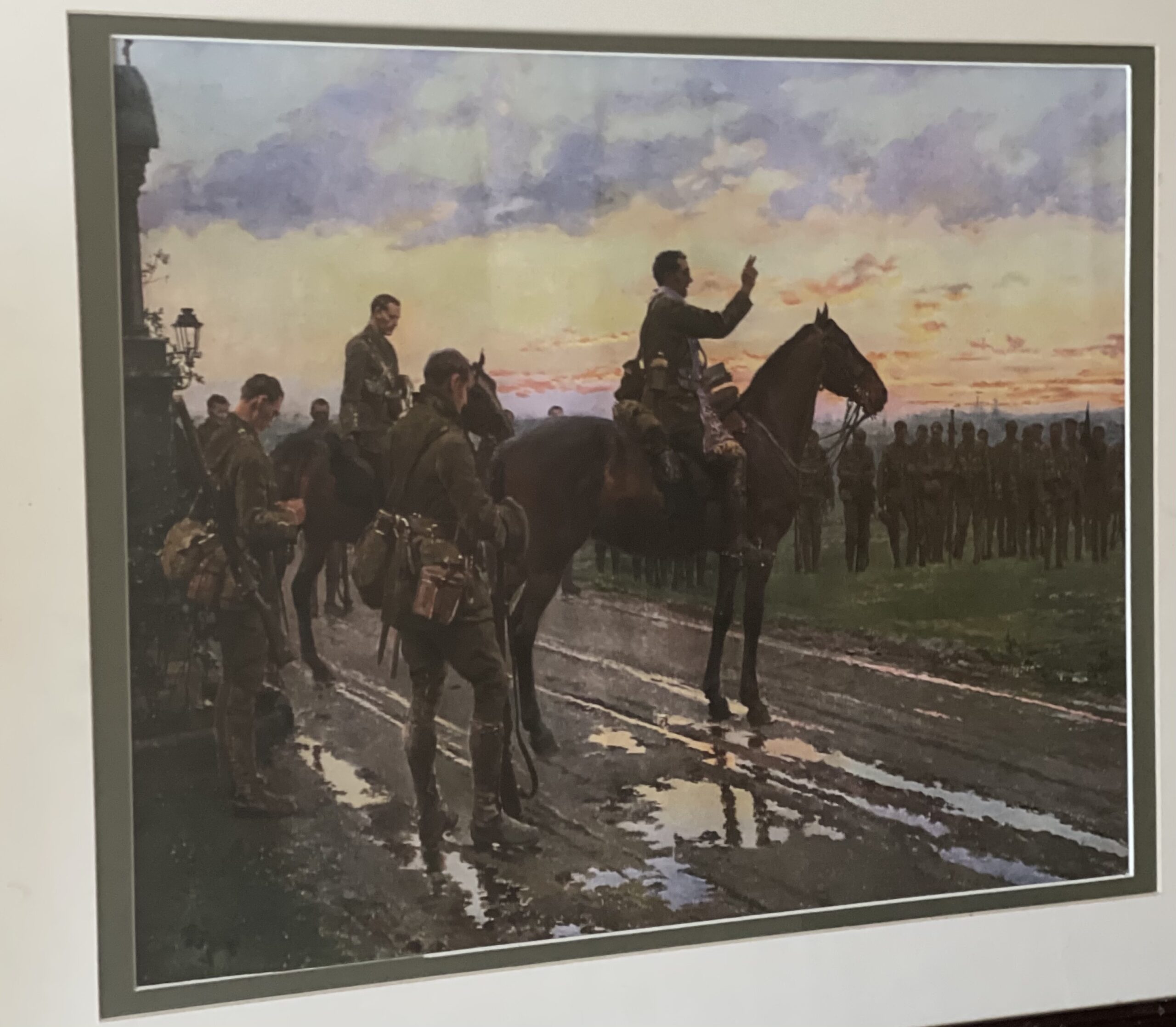 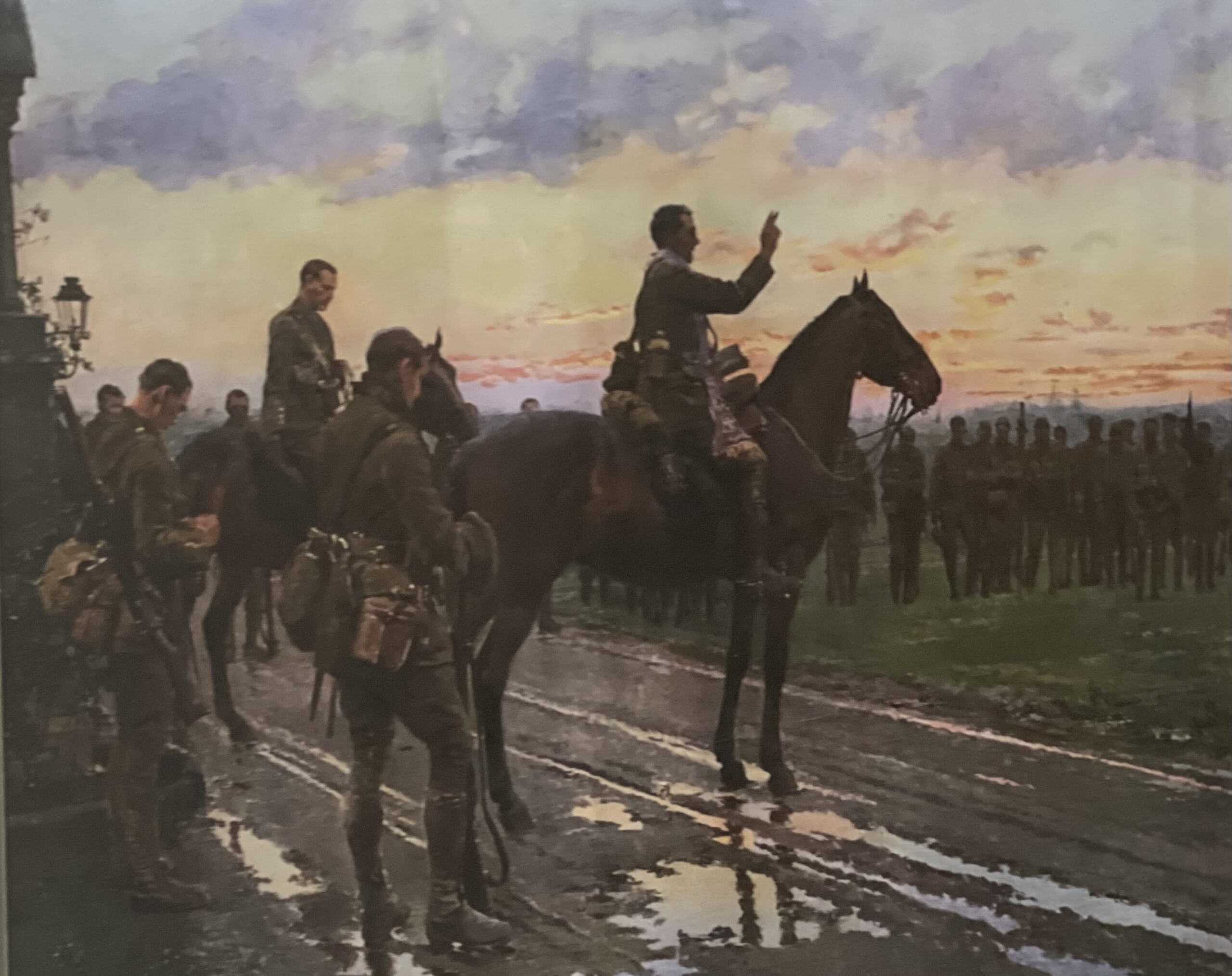 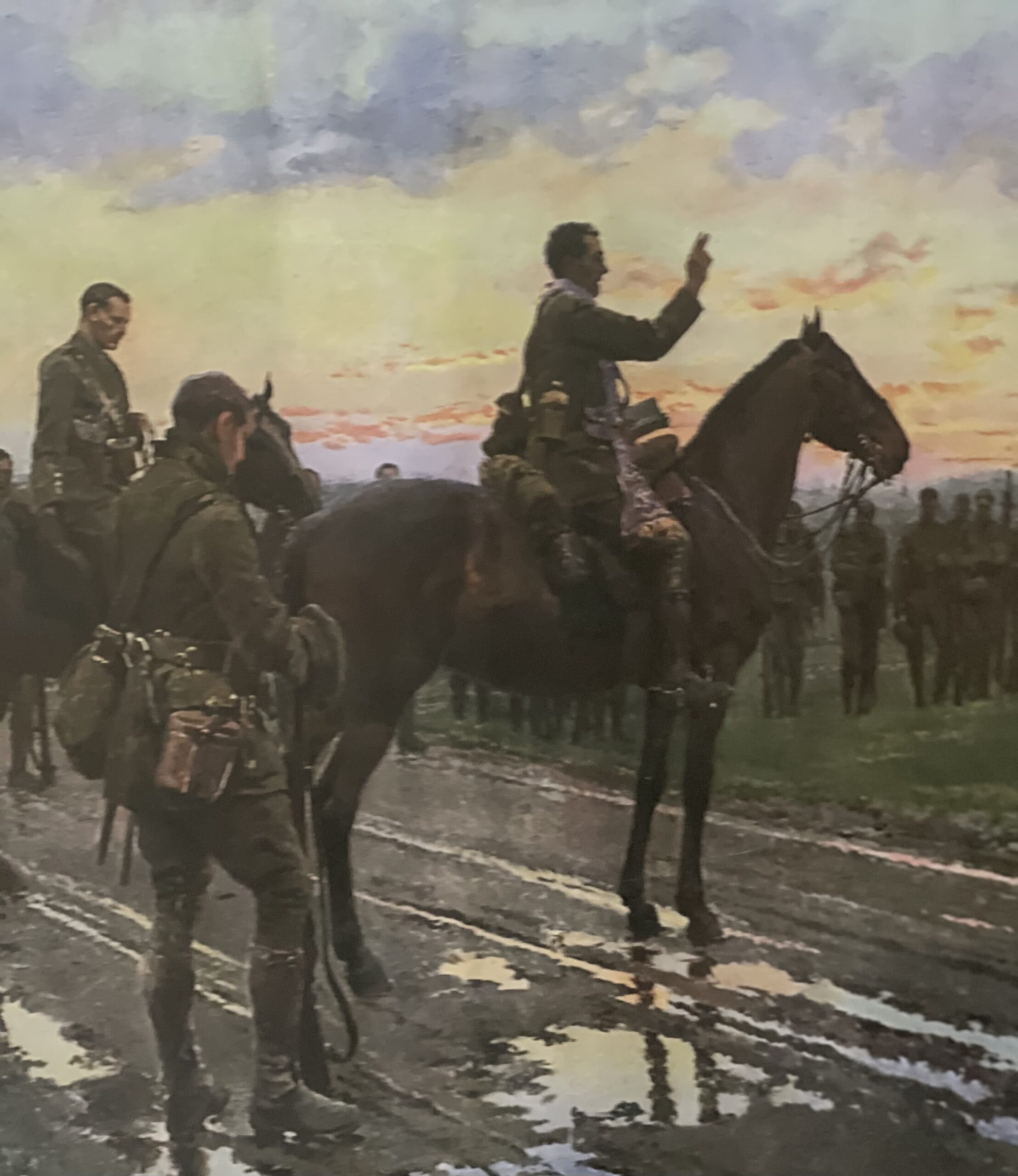 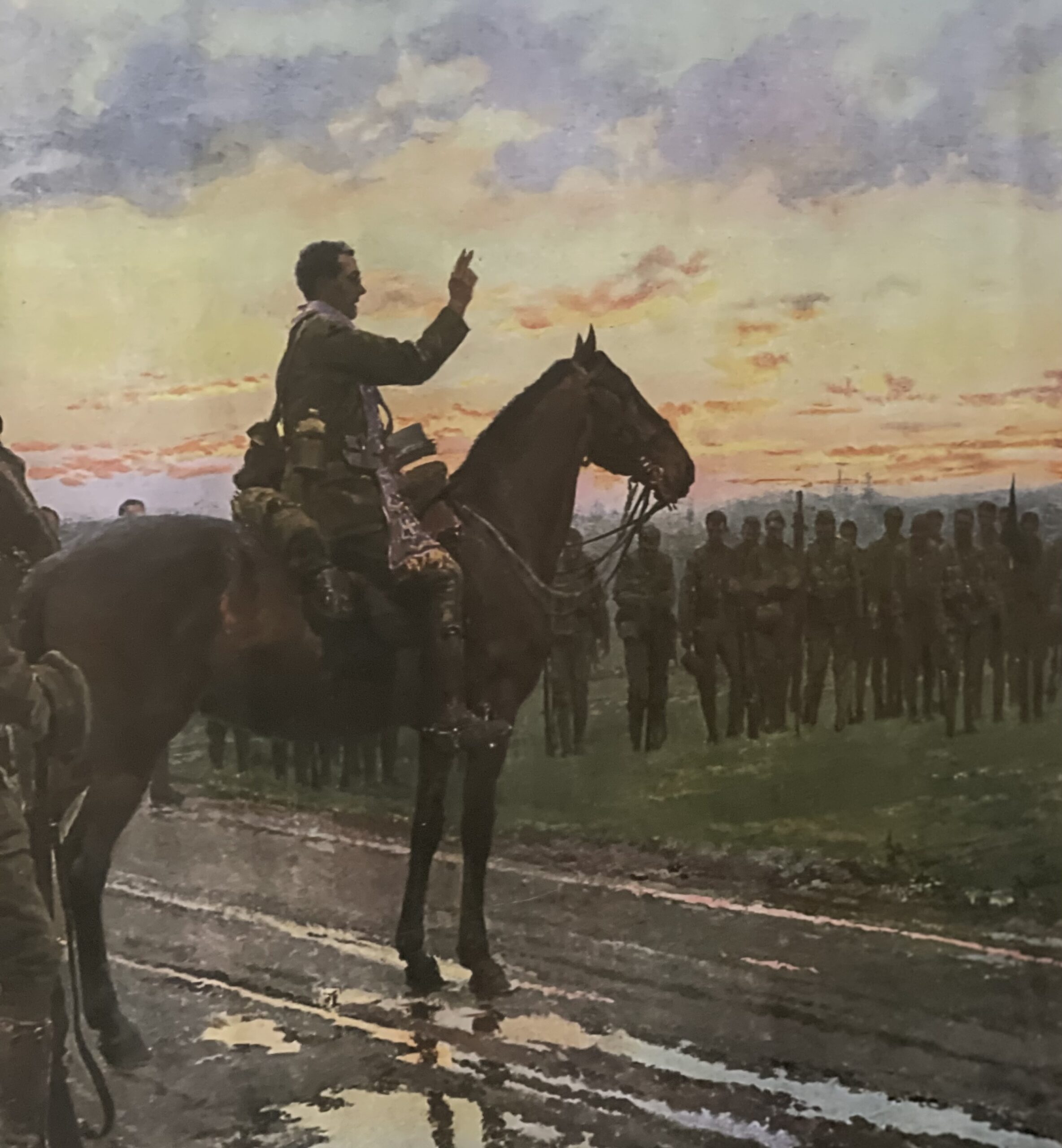 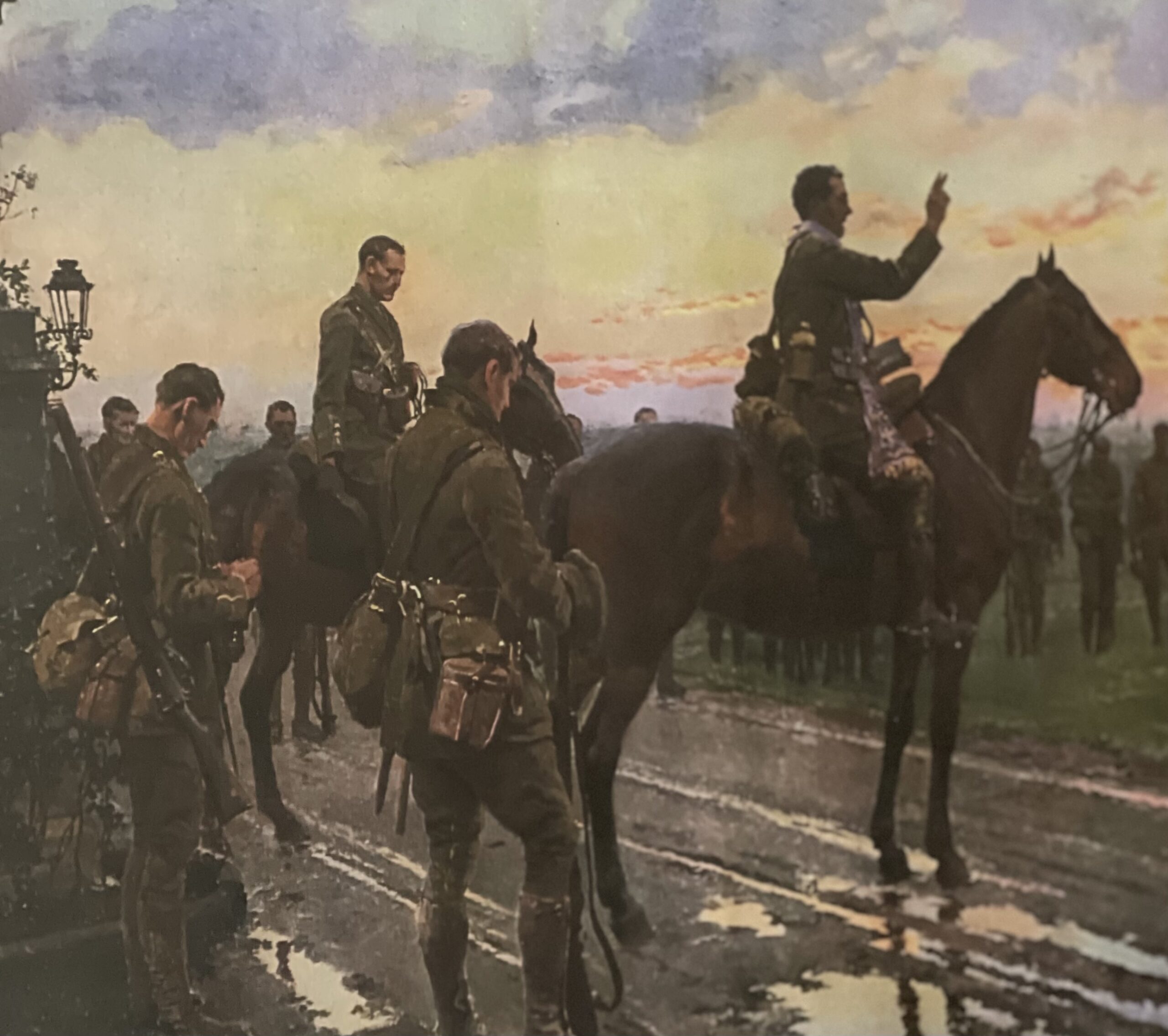 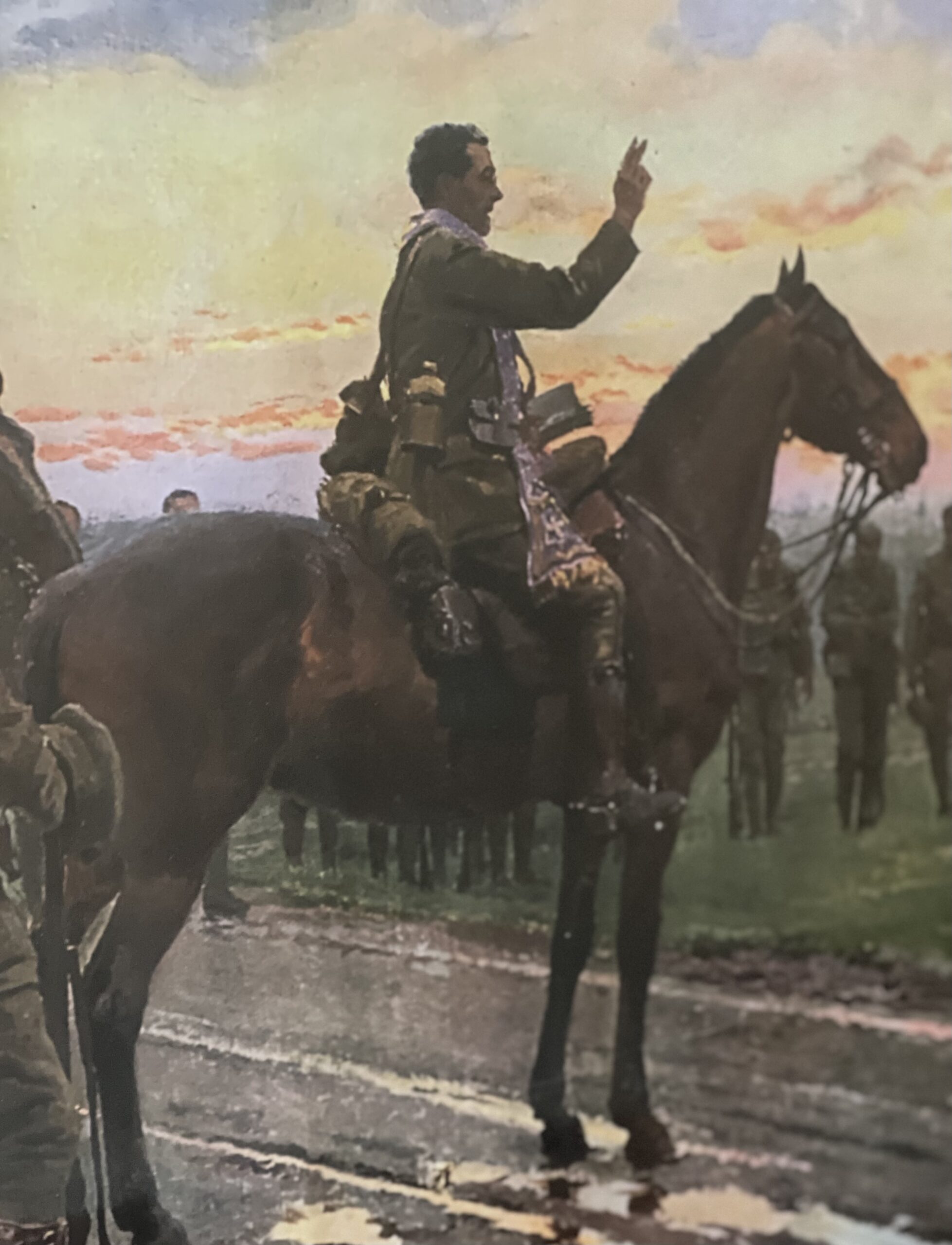 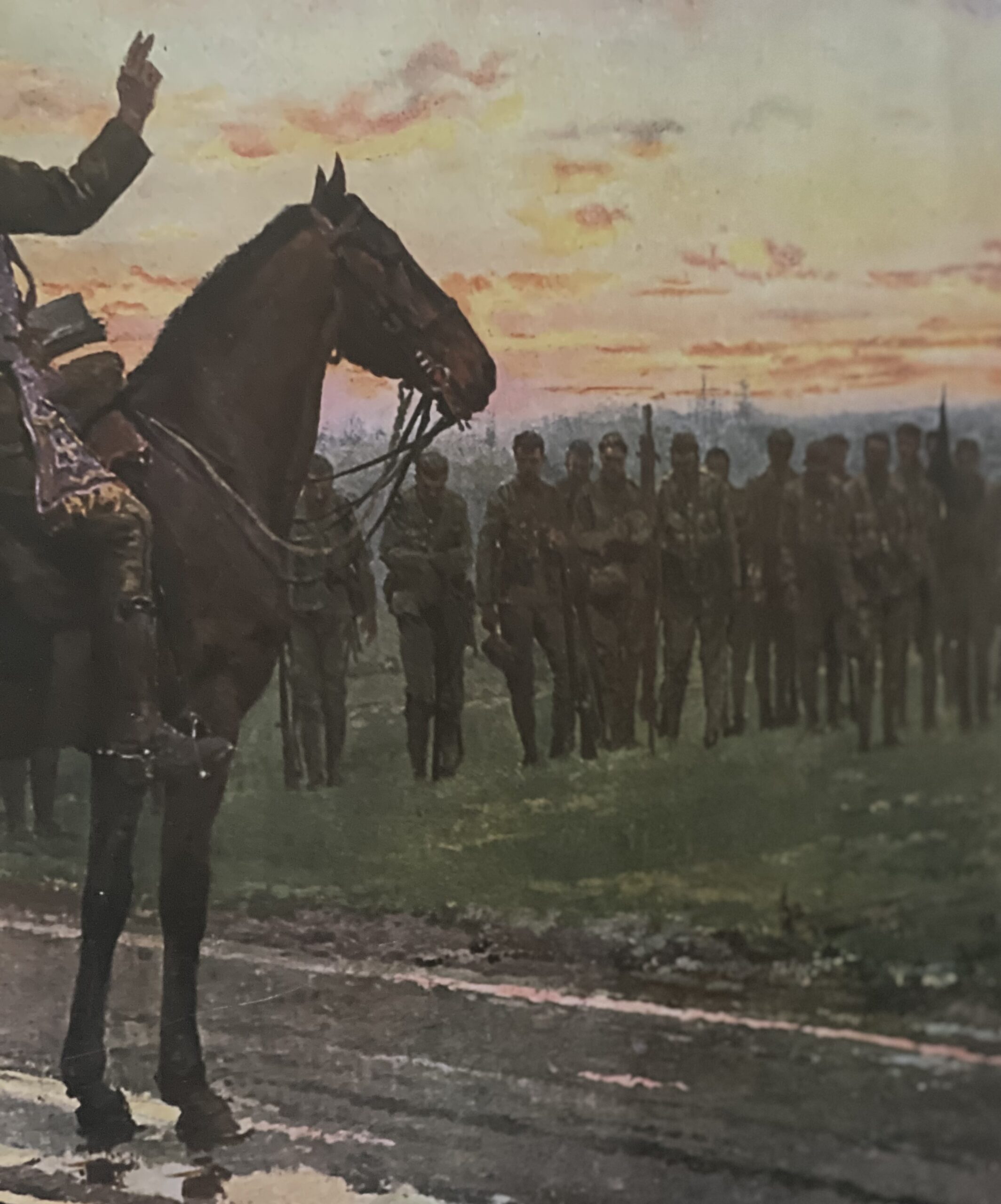