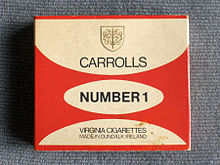 A packet of 20 Carrolls Number 1 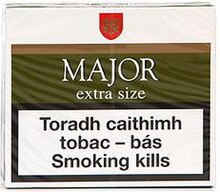 A package of 20 Major

P. J. Carroll & Company Limited, often called Carroll’s, is a tobacco company in Republic of Ireland. It is Ireland’s oldest tobacco manufacturer and is now a subsidiary of British American Tobacco Plc.Its cigarette brands were among the best selling in Ireland in the twentieth century. Its factory was for decades the largest employer in Dundalk.

Patrick James Carroll (b. 1803) completed his apprenticeship as a tobacconist in 1824 and opened a shop in Dundalk, later also manufacturing cigars.Patrick James moved to Liverpool in the 1850s. His son Vincent Stannus Carroll expanded the firm in the later 19th century.His son James Marmion Carroll moved to a house outside Dundalk.A second factory was opened, in Liverpool, in 1923. The company went public in 1934.

A purpose-built factory opened in 1970. Designed by Ronnie Tallon of Michael Scott and Partners, it was described by Frank McDonald as “way ahead of anything else in Ireland at the time”. In 1974 to mark the 150th anniversary of its founding, P.J. Carroll published an illustrated booklet by the writer James Plunkett: P. J. Carroll & Co. Ltd, Dublin & Dundalk – A Retrospect, outlining the development of the company in its historical context.

Carroll’s was acquired by Rothmans in 1990; Rothmans was acquired by British American Tobacco Plc in 1998. The company’s share of the Irish tobacco market is around 17%. In 2002 the Dundalk site was sold for €16.4m to the Department of Education and repurposed for the campus of Dundalk Institute of Technology. Carroll’s rented back a small section for its remaining factory operations, until finally ceasing its Dundalk operations in 2008. Carrolls remains an Irish company with deep connections to hundreds of retirees and nearly 40 staff based in their Dublin offices

Carroll’s was a major sponsor of sport in Ireland until restrictions were imposed on tobacco advertising. The company had naming rights over the GAA All Stars Awards (1971–78);and Irish showjumping horses of the 1970s and 80s, such as the great “Carroll’s Boomerang” ridden by Eddie Macken. 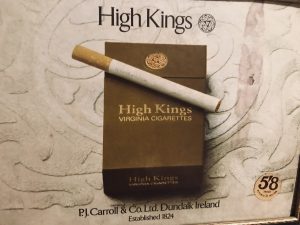 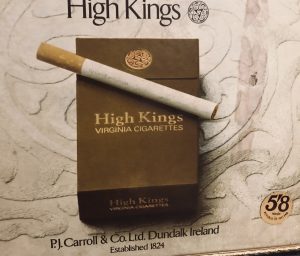 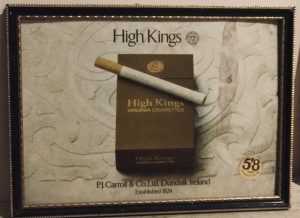 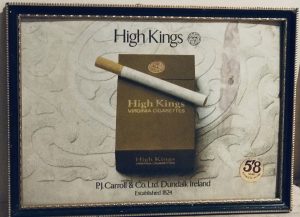