Daniel Breen (11 August 1894 – 27 December 1969) was a volunteer in the Irish Republican Armyduring the Irish War of Independence and the Irish Civil War. In later years he was a Fianna Fáil politician.

He was educated locally, before becoming a plasterer and later a linesman on the Great Southern Railways.

Breen was sworn into the Irish Republican Brotherhood in 1912 and the Irish Volunteers in 1914. On 21 January 1919, the day the First Dáil met in Dublin, Breen—who described himself as “a soldier first and foremost”—took part in the Soloheadbeg Ambush.The ambush party of eight men, nominally led by Séumas Robinson, attacked two Royal Irish Constabulary men who were escorting explosives to a quarry. The two policemen, James McDonnell and Patrick O’Connell, were fatally shot during the incident. The ambush is considered to be the first incident of the Irish War of Independence.

“…we took the action deliberately, having thought over the matter and talked it over between us. [Seán] Treacyhad stated to me that the only way of starting a war was to kill someone, and we wanted to start a war, so we intended to kill some of the police whom we looked upon as the foremost and most important branch of the enemy forces … The only regret that we had following the ambush was that there were only two policemen in it, instead of the six we had expected…“

During the conflict, the British put a £1,000 price on Breen’s head, which was later raised to £10,000.He quickly established himself as a leader within the Irish Republican Army (IRA). He was known for his courage. On 13 May 1919, he helped rescue his comrade Seán Hogan at gunpoint from a heavily guarded train at Knocklong station in County Limerick. Breen, who was wounded, remembered how the battalion was “vehemently denounced as a cold-blooded assassins” and roundly condemned by the Catholic Church. After the fight, Seán Treacy, Séumas Robinson and Breen met Michael Collins in Dublin, where they were told to escape from the area. They agreed they would “fight it out, of course”. Breen and Treacy shot their way out through a British military cordon in the northern suburb of Drumcondra (Fernside). They escaped, only for Treacy to be killed the next day. Breen was shot at least four times, twice in the lung.

The British reaction was to make Tipperary a ‘Special Military Area’, with curfews and travel permits. Volunteer GHQ authorised enterprising attacks on barracks. Richard Mulcahy noted that British policy had “pushed rather turbulent spirits such as Breen and Treacy into the Dublin area”. The inculcation of the principles of guerrilla warfare was to become an essential part of all training. They joined Collins’ Squad of assassins, later known as the Dublin Guard, when Tipperary became “too hot for them”. and Dublin was the centre of the war.

Breen was present in December 1919 at the ambush in Ashtown beside Phoenix Park in Dublin where Martin Savage was killed while trying to assassinate the Lord Lieutenant of Ireland, Viscount French. The IRA men hid behind hedges and a dungheap as the convoy of vehicles came past. They had been instructed to ignore the first car, but this contained their target, Lord French. Their roadblock failed as a policeman removed the horse and cart intended to stop the car.

Breen rejected the Anglo-Irish Treaty, which made him, like many others, angry and embittered:

Regarding the continued existence of Northern Ireland from 1922, and an inevitable further war to conquer it to create a united Ireland, Breen commented:

“To me, a united Ireland of two million people would be preferable to an Ireland of four and a half million divided into three or four factions“.

In the June 1922 general election, Breen was nominated as a candidate by both the pro- and anti-Treaty sides, in the Waterford–Tipperary East constituency, but was not elected.

Breen was elected to Dáil Éireann at the 1923 general election as a Republican anti-Treaty Teachta Dála (TD) for the Tipperary constituency.Following the Anglo-Irish Treaty, Breen joined the Anti-Treaty IRA in the Civil War, fighting against those of his former comrades in arms who supported the Treaty. He was arrested by the National Army of the Irish Free State and interned at Limerick Prison. He spent two months there before going on hunger strike for six days, followed by a thirst strike of six days. Breen was released after he signed a document pleading to desist from attacking the Free State.

Breen wrote a best-selling account of his guerrilla days, My Fight for Irish Freedom, in 1924, later republished by Rena Dardis and Anvil Press.

Breen represented Tipperary from the Fourth Dáil in 1923 as a Republican with Éamon de Valera and Frank Aiken.He was the first anti-Treaty TD to take his seat, in 1927. Standing as an Independent Republican he was defeated in the June 1927 general election. Thereafter Breen travelled to the United States, where he opened a speakeasy. He returned to Ireland in 1932 following the death of his mother,and regained his seat as a member of Fianna Fáil in the Dáil at that year’s general election. He represented his Tipperary constituency without a break until his retirement at the 1965 election.

Breen supported the Republican side during the Spanish Civil War.

During World War II, he was said to hold largely pro-Axis views, with admiration for Erwin Rommel.When the fascist political party Ailtirí na hAiséirghe failed to win any seats in the 1944 Irish general election, he remarked that he was sorry that the party had not done better, as he had studied their programme and found a lot to commend. In 1946, Breen became secretary of the Save the German Children Society. He attended the funeral of Nazi spy Hermann Gortz on 27 May 1947.Irish-American John S. Monagan visited Breen in 1948, and was surprised to see two pictures of Adolf Hitler, a medallion of Napoleon and a Telefunken radio. Breen told him “the revolution didn’t work out,” and “to get the government they have now, I wouldn’t have lost a night’s sleep.” He also said that he fought for freedom, but not for democracy.In 1943, Breen sent his “congratulations to the Führer. May he live long to lead Europe on the road to peace, security and happiness”. After the end of World War II in Europe, the German Legation in Dublin was taken over by diplomats from the USA in May 1945, and “.. they found a recent letter from Breen asking the German minister to forward his birthday wishes to the Führer, just days before Hitler committed suicide.”

Breen was co-chairman of the anti-Vietnam War organisation “Irish Voice on Vietnam”.

Breen was married on 12 June 1921, during the War of Independence, to Brigid Malone, a Dublin Cumann na mBan woman and sister of Lieutenant Michael Malone who was killed in action at the Battle of Mount Street Bridge during the 1916 Rising. They had met in Dublin when she helped to nurse him while he was recovering from a bullet wound.

Seán Hogan was best man, and the bride’s sister Aine Malone was the bridesmaid. Photographs of the wedding celebrations taken by 5th Battalion intelligence officer Séan Sharkey are published in The Tipperary Third Brigade a photographic record. Breen was, at the time, one of the most wanted men in Ireland, and South Tipperary was under martial law, yet a large celebration was held. The wedding took place at Purcell’s, “Glenagat House”, New Inn, County Tipperary. Many of the key members of the Third Tipperary Brigade attended, including flying column leaders Dinny Lacey and Hogan. Breen was the brother in-law of Commandant Theobald Wolfe Tone FitzGerald, the painter of the Irish Republic Flag that flew over the GPO during the Easter Rising in 1916.

The Breens had two children, Donal and Granya. Breen was an atheist.

Breen died in Dublin in 1969, aged 75, and was buried in Donohill, near his birthplace. His funeral was the largest seen in west Tipperary since that of his close friend and comrade-in-arms, Seán Treacy, at Kilfeacle in October 1920. An estimated attendance of 10,000 mourners assembled in the tiny hamlet, giving ample testimony to the esteem in which he was held.

Breen was the subject of a 2007 biography, Dan Breen and the IRA by Joe Ambrose.

Breen is mentioned in the Irish folk ballad “The Galtee Mountain Boy“, along with Seán Moylan, Dinny Lacey, and Seán Hogan. The song, written by Patsy Halloran, recalls some of the travels of a “Flying column” from Tipperary as they fought during the Irish War of Independence, and later against the pro-Treaty side during the Irish Civil War.

The trophy for the Tipperary Senior Hurling Championship is named after him. 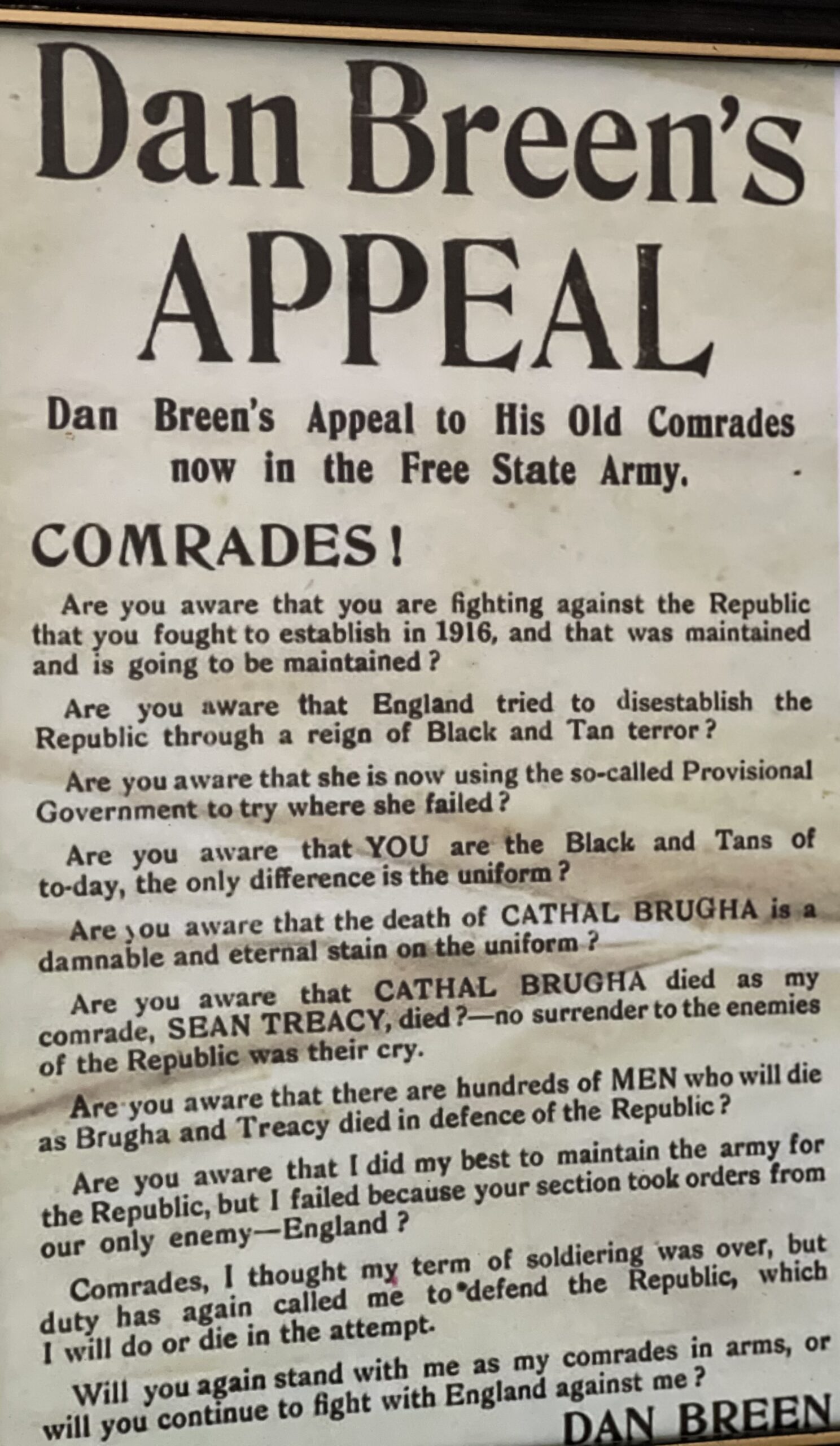 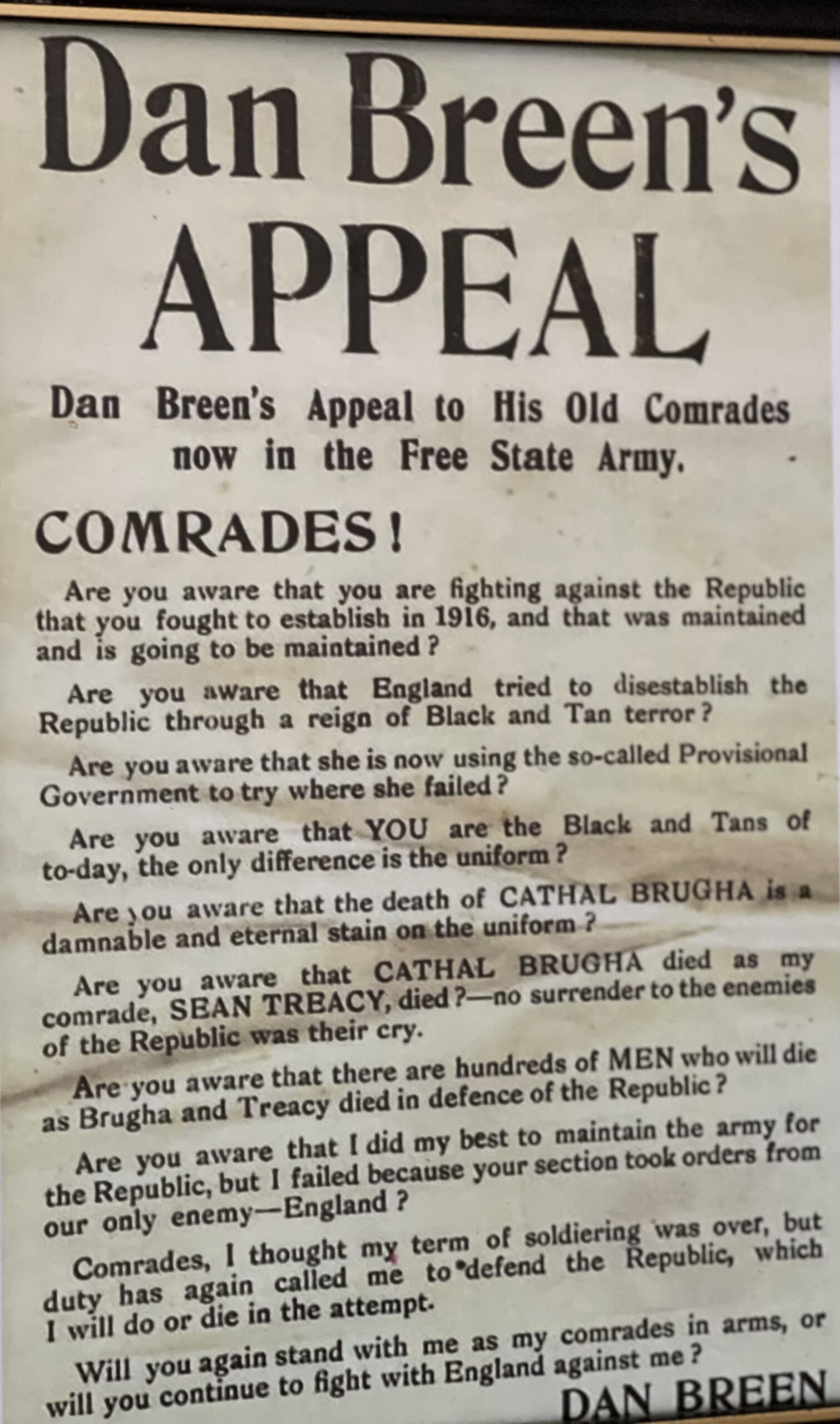 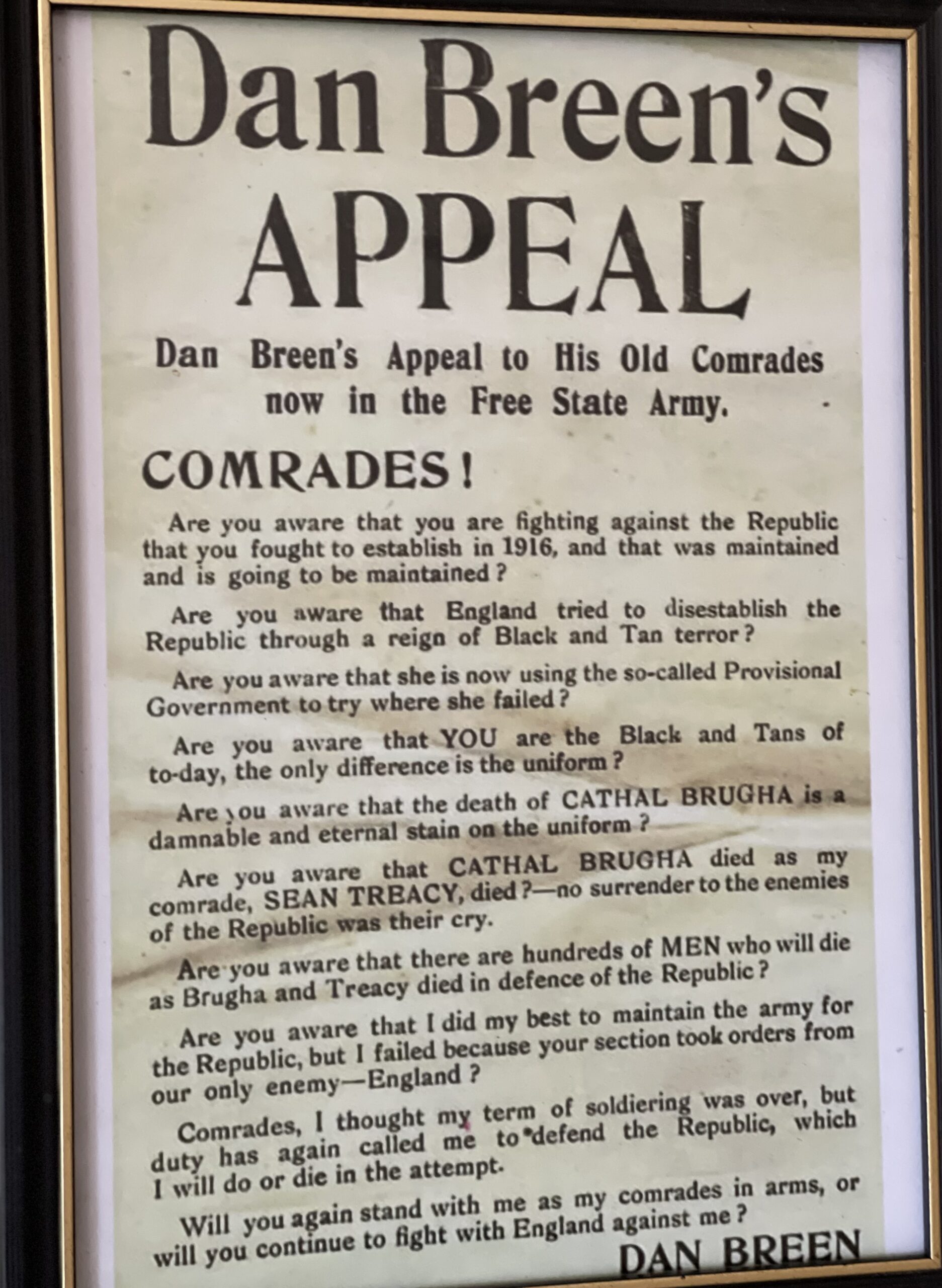