Vintage advertising poster advertising a car racing in Limerick in 1929 to be held around the city and organised by the Irish Motor Racing Club Ltd ,based in Foster Place Dublin.

People, like this writer, who do not even have a driving licence find it very difficult to understand the extraordinary interest in motor racing which has mushroomed over the last few years.

This newspaper and others have expanded coverage of the sport in a big way and that can only be partly explained by the fact that a young Irishman, Eddie Irvine, has made significant progress in the drivers’ championship and that Dubliner Eddie Jordan has a team competing in the constructors’ championship.

There is a very long and distinguished history of motor racing in Ireland, going back to the turn of the century and before. Irish motorists have contributed profoundly to the popularity of motor racing history. In this context, names like Dunlop and Ferguson immediately spring to mind.

The Belfast businessman John Boyd Dunlop first hit upon the idea of a pneumatic tyre when he was trying to entice his son to continue what he considered to be a healthy bicycling pursuit. When Dunlop’s tyres helped to wipe out all competition in a Belfast sports meeting in Easter 1889, the invention sparked an idea in the mind of a Dublin businessman called Harvey du Cros – a Huguenot who had fled Roman Catholic persecution in his native France to flee to, of all places, Dublin.

The Huguenot refugee had several distinctions. He was a boxing and fencing champion in his day and a founder member of Bective Rangers rugby club. Whether he would have been proud of the latter achievement today cannot be assessed. (Just a joke lads.)

He set up a factory for the manufacture of tyres in Stephen Street in Dublin just before the turn of the century and, in doing so, made an enormous contribution to the revolution of transport in the world.

The name of Dunlop remains synonymous with tyres, but, sadly, the name du Cros is seldom mentioned. Nevertheless he holds the major French decoration of Legion d’honneur.

The Shannon Development Company of 1900 was the first organisation to promote a motor race in Ireland. The company had built a hotel in Killaloe and organised a motor trip from Dublin to that lovely Clare town, via Nenagh. A De Dion brand car, driven by L Fleming, was first to enter Killaloe in July of 1900.

James Gordon Bennett, the American millionaire who had sent Stanley in pursuit of Livingston, offered the first major trophy for motor racing. There was a reluctance to allow this very dangerous sport to be held in Britain and the matter was referred to the House of Commons when an extraordinary alliance involving John Redmond, Tim Healy and Sir Edward Carson all supported the idea that speed limits should be set aside for that day.

The Northern Whig said: “We see a wonderful blending of the Orange and Green. There is, about this matter, a unanimity of which some people considered Irishmen to be incapable.”

Could we, perhaps, arrange a Drumcree Grand Prix!

With the blessing of the Bishop of Kildare, a circuit centred on Athy was agreed for Ireland’s first serious motor road race which took place on July 2nd, a public holiday, in 1903. The race started just north of Athy and on a figure of eight circuit, the competitors drove 327 miles, going through such exotic places as Kilcullen, Castledermot, Carlow, Monasterevin, Stradbally and Windy Gap.

In the build up to the race, James Joyce earned a few badly needed shillings by interviewing the top French driver of the day, Henri Fournier, in The Irish Times.

Drivers from all over Europe and the United States took part and prices went through the ceiling as foreign drivers, mechanics, and spectators descended on Athy and its environs. There was one report of £50 being charged for two rooms in Kilcullen for one night, a charge which might, even today, be regarded as a little pricey.

Mineral waters, normally costing tuppence, were offered at sixpence, but then what else is new! Local farmers’ wives also made “a killing” by releasing their hens onto the practice roads and then demanding compensation when they were killed by the speeding cars.

Readers may ask how come this writer has taken so much interest in this matter without ever having driven anything faster than a tractor. The reason is that, by chance, I came across a book some time ago called Green Dust, by Brendan Lynch, and was immediately captivated, not only by the tales he told and the manner of the telling, but by the picture of Ireland which Lynch painted.

What I see of motor racing on television nowadays bores me to tears, but Brendan Lynch’s book is in a different category altogether.

As far as I know it is out of print. Could I humbly suggest that he and the publishers, Portobello Publishing, reprint this sporting treasure. 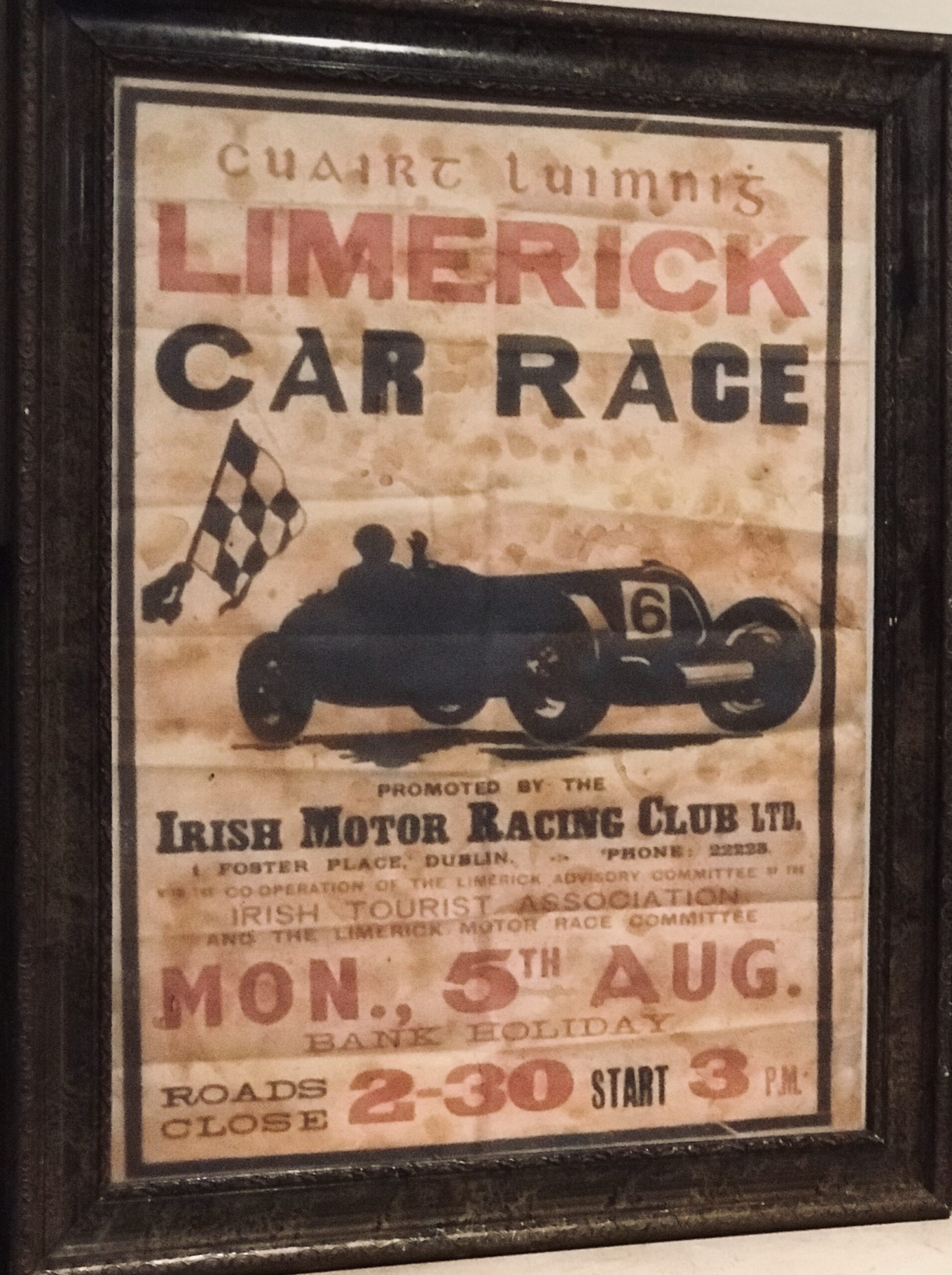 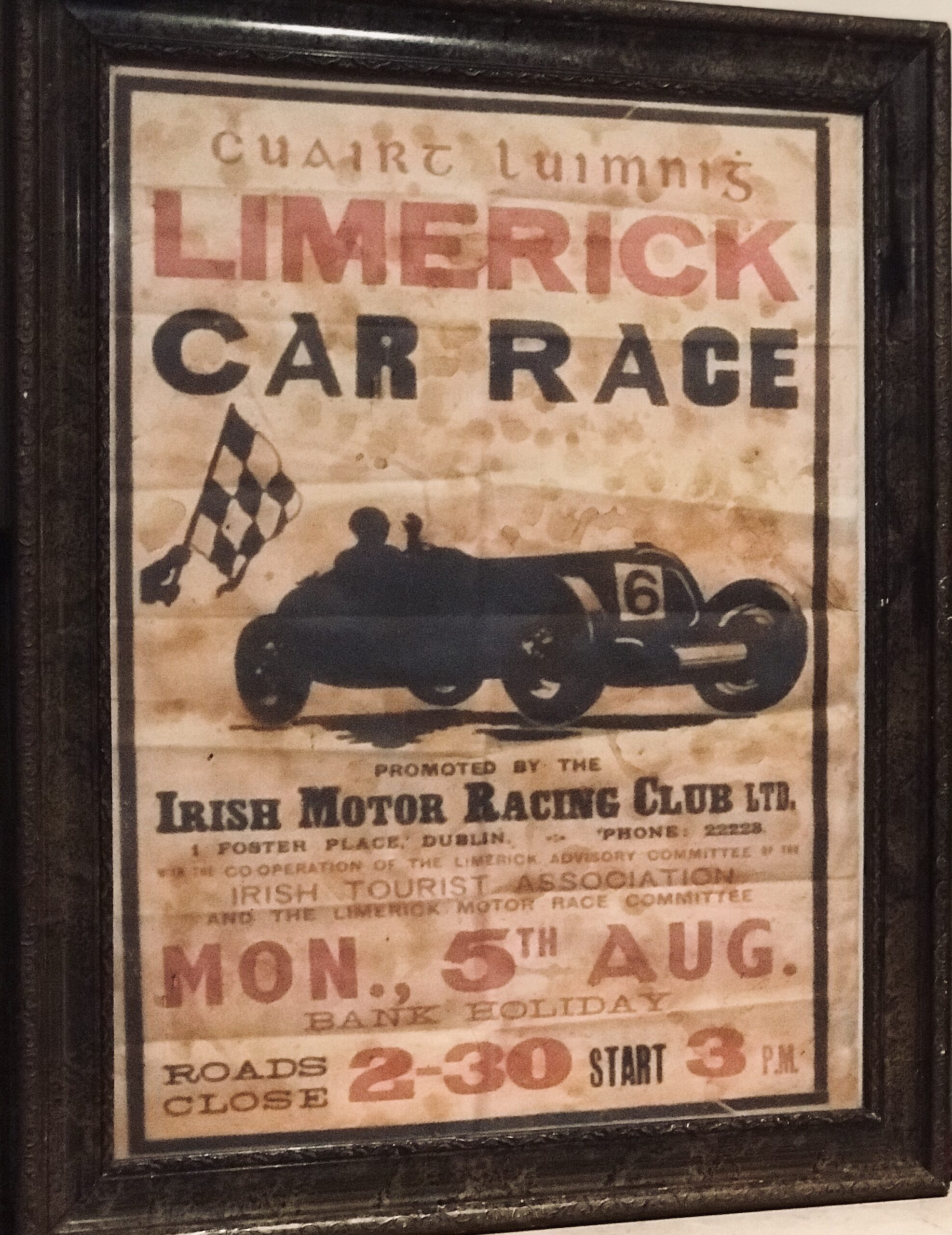 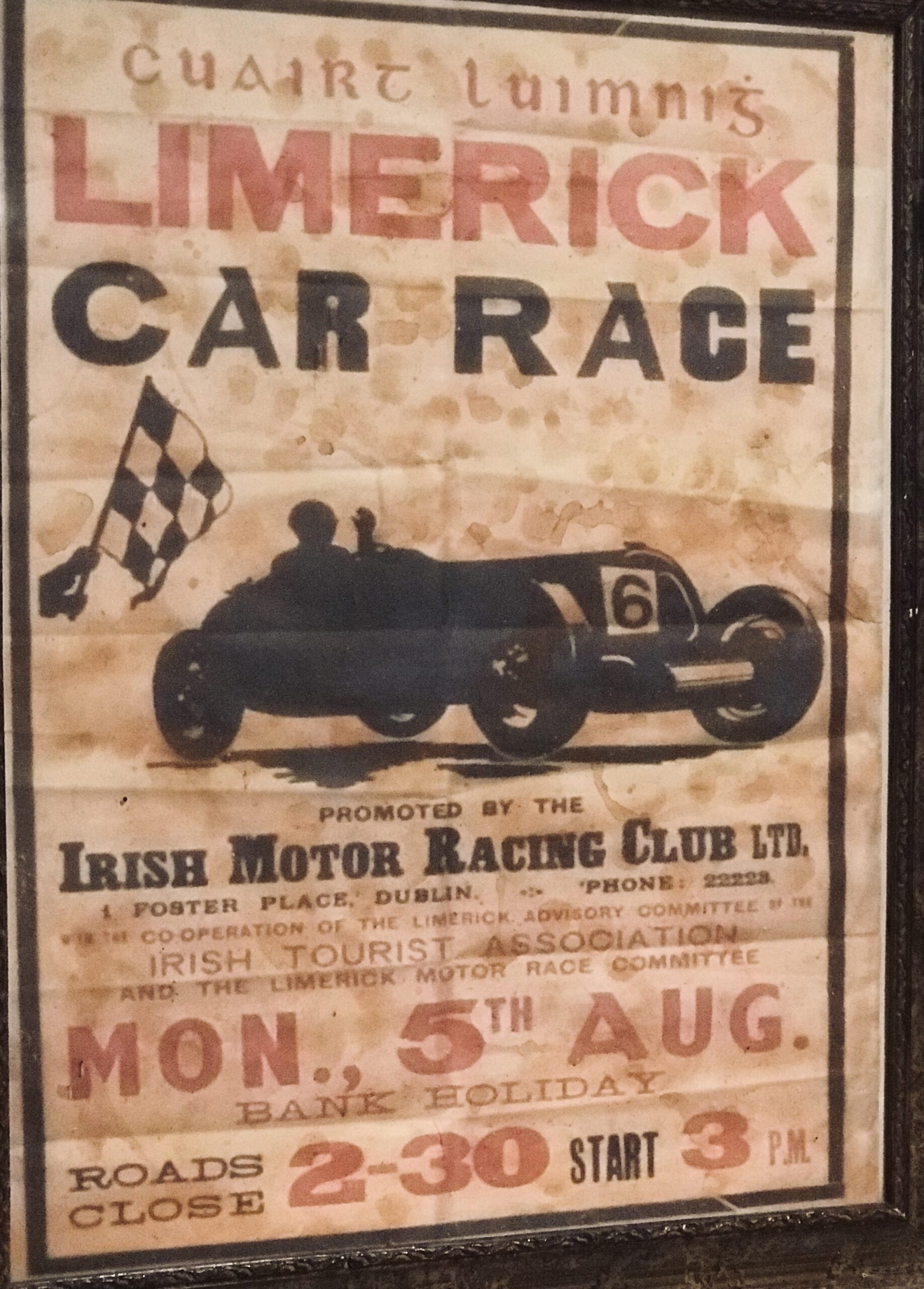 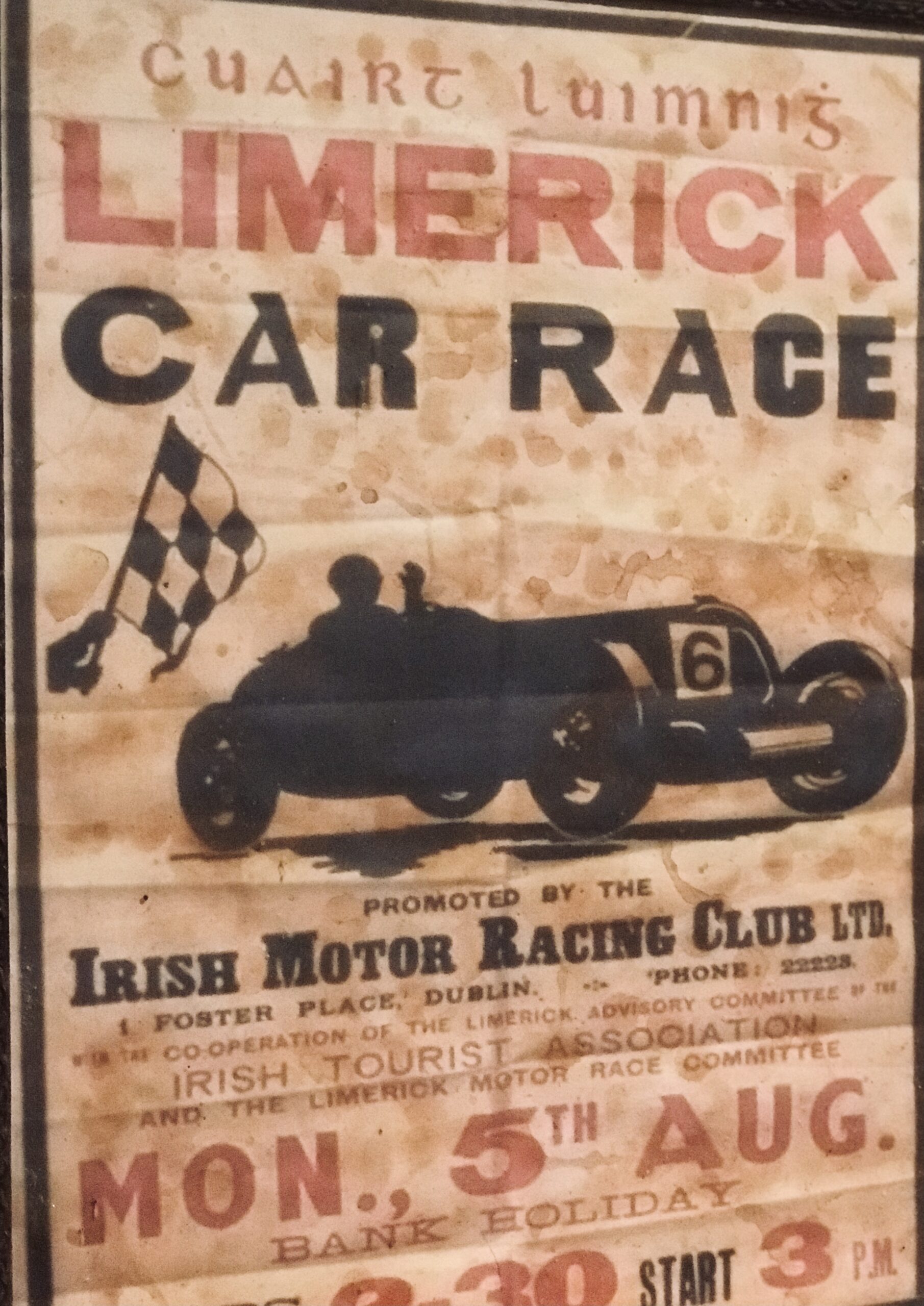 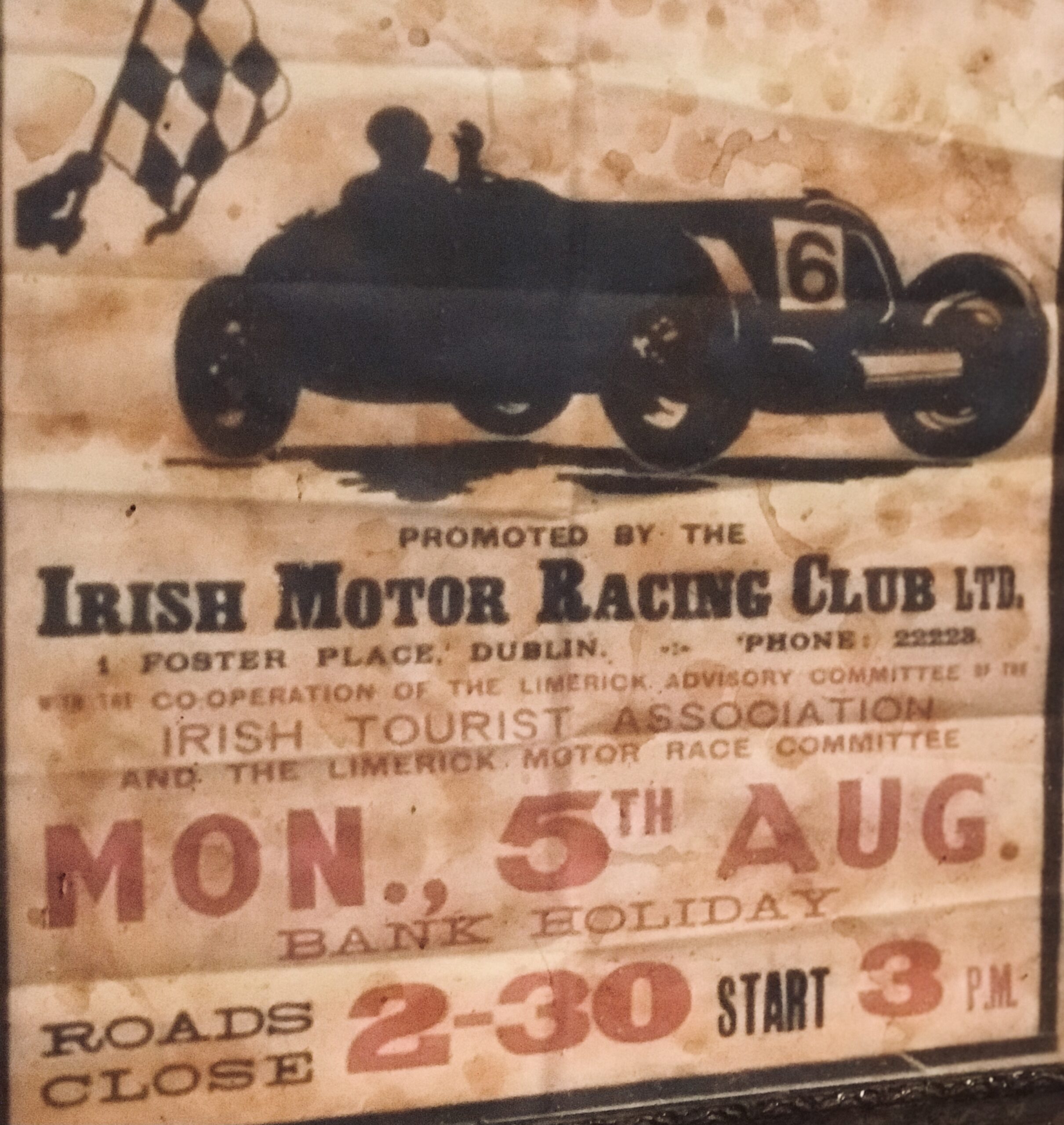 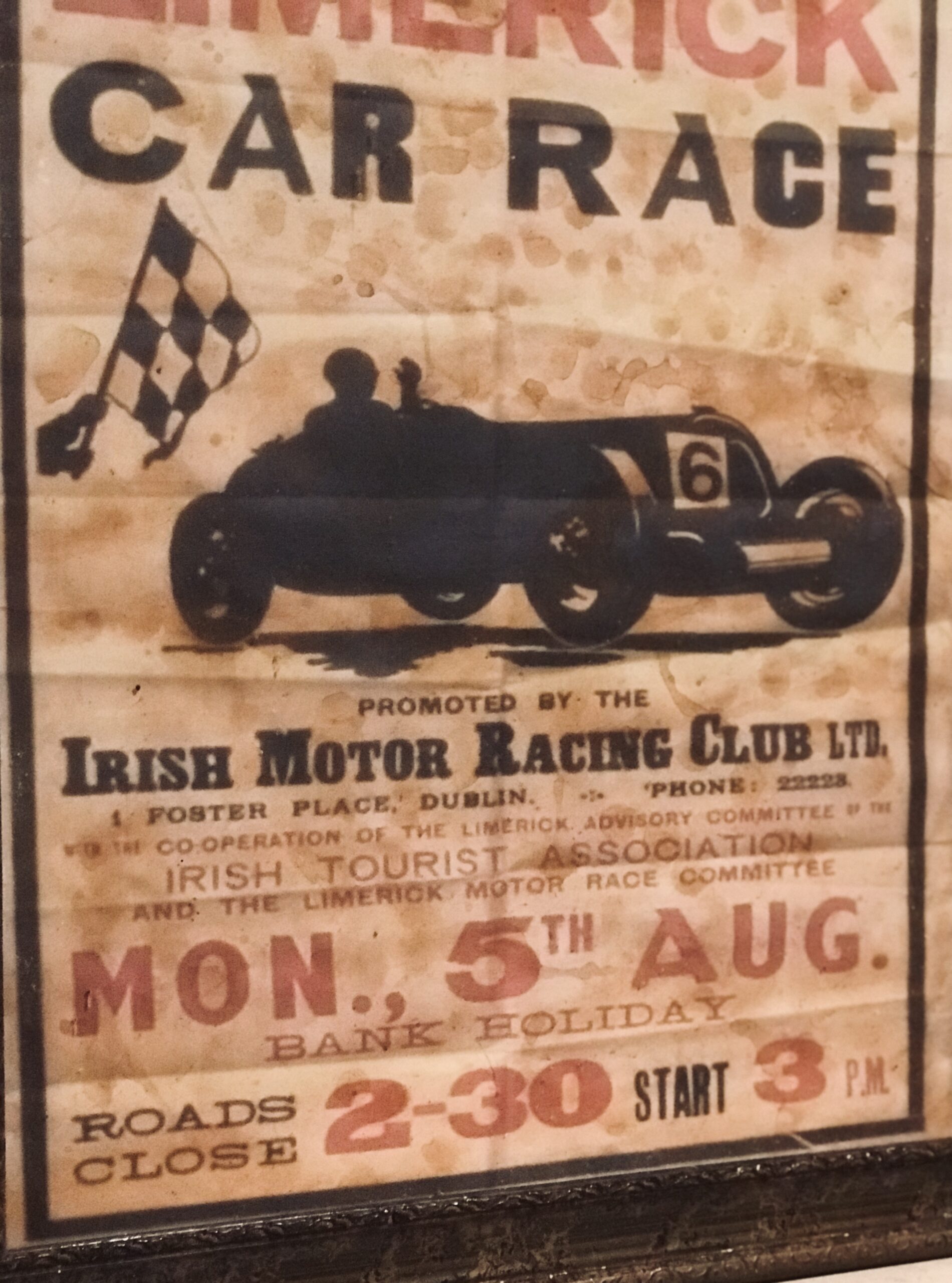