t was a very different world then.   In European terms, the assassination of Archduke Franz Ferdinand lit the fuse that plunged the continent into the Great War in August 1914.  Women didn’t have the vote and Emily Parkhurst, pioneer of women’s emancipation, was jailed for protesting outside Buckingham Palace, and not for the first time.  In Ireland, we still lived under British Rule.  Independence was on many people’s minds and life was a struggle.

In hurling terms, life and work impacted on training and opportunity.  These days, the All-Ireland championship is a sophisticated journey involving coaches, motivators, nutritionists and media appearances.  In 1914, it was a different.  This was illustrated by Tom McInerney, younger brother of Pat ‘Fowler’ McInerney (1914 medal winner) speaking to Liam Ryan of The Irish Times newspaper on August 28, 1995.  Tom spoke of the difficulties his brother encountered before the 1914 final.   Apparently, young Pat’s labour was so badly needed on the family farm that his father didn’t want him to play hurling. So, when Pat  ‘Fowler’ was called up for All-Ireland pre-match training, he was unable to tell his father.  One day after dinner, he left home without telling anyone and joined the team for two weeks collective training. He came home with an All-Ireland medal.

The Clare season had begun long before All-Ireland day – October 18, 1914. It began in May of that year with a series of divisional games involving East, South and Mid Clare.  These games, the brainchild of Amby Power, were designed to allow the best hurling talent to emerge. And they did, producing much needed young blood, including John Fox, Brendan Considine, Sham Spellissy, Jim Guerin and Fowler McInerney for the senior county side.

Clare started with a decisive 7-3 to 4-1 win over a strong Kerry team.  Goals were prolific in hurling at this time because of the abundance of first-time ground striking.   Clare went on to conquer Limerick, who had earlier beaten Tipperary by 14 points.   A delayed Munster final meant that Cork were nominated to represent Munster in the All-Ireland semi-final and they easily overcame the challenge of Galway, but subsequently lost to Clare in the Munster final.

In Leinster, an exciting and dashing Laois team became the provincial champions for the first time. Along the way, the Midlanders defeated Wexford, Dublin and All-Ireland champions Kilkenny.  Laois were the team who would now meet Clare in the All-Ireland final.

On All-Ireland day itself, the Clare team came on to the pitch, accompanied by William Redmond, MP for East Clare.   Croke Park was then a smaller venue that had been purchased by the GAA in 1913.  The team was greeted by terrific cheering from the estimated attendance of 15,000, who had paid a total of £475 at the gate.

Cars were scarce and many people would have travelled to Dublin by train.  One of those was Elizabeth Cremins, then an 18-year-old girl from Newmarket-on-Fergus.  Speaking me in 1995, when she was then almost 100 years old, she said,   “I went to every hurling match, especially when Newmarket were playing.  Newmarket and Ennis were great rivals.  I knew John Fox, Jim Clancy, Jim Guerin and Rob Doherty.  Rob Doherty was very stylish.  He used to thrill the crowds when he’d race along the wing. I remember the newspapers describing his dramatic sprints.  Newmarket had great hurlers. We went by train from Ballycar to Dublin.  Many of us had never been on a train before.  Mike, my brother, was with me and I remember him singing The Croppy Boy on the journey.  We got out at Kingsbridge, as it was then and we got on the first tram and got off when it stopped.  We thought we were in Jones’ Road (Croke Park).

In the Clare dressing room before the throw in, then as now, switches were made.  Management decided to play Jim Guerin instead of the selected Paddy McDermott. Clare got off to a terrific start building up an interval lead of 10 points, 3-1 to Nil with a goal from Jim Clancy after seven minutes and two from Jim Guerin.

Laois, who were never let play with their usual dash, fought back with an early second half goal, but with the Clare backs playing soundly, the forwards went on to score two more goals to leave Clare comfortable winners by 5-1 to 1-0 against a disappointing Laois team.

Clare’s win was reported in the following day’s Irish Independent.  “They excelled in both science and dash.  Not only in attack did they demonstrate marked superiority, but their backs gave a grand display, which was generally admired. The victorious Clare team collected the Great Southern Challenge Cup and the aftermath celebrations took place in Wynne’s Hotel, Lower Abbey Street.  They returned home the following day to a hero’s welcome.”

To day, the All-Ireland final is an extraordinary spectacle, with attendances of over 82,000 and transmitted to millions of people all over the world.  In 1914, the attendance was smaller and word of the Clare win filtered slowly back to the county. But, the honour, pride and sense of achievement were exactly the same.

Juniors make it a double

CLARE was the first county to win the senior and junior double in 1914.  In the junior championship, the Banner County defeated Kerry, Tipperary, Cork and Laois in the final by 6-5 to 1-1.  The final wasn’t played until March 1915.    Match reports in the newspapers of the day were short and erratic.  Only four of Clare’s six goals were accounted for.  Two are credited to Dan Minogue and the other two to Ted Lucid. 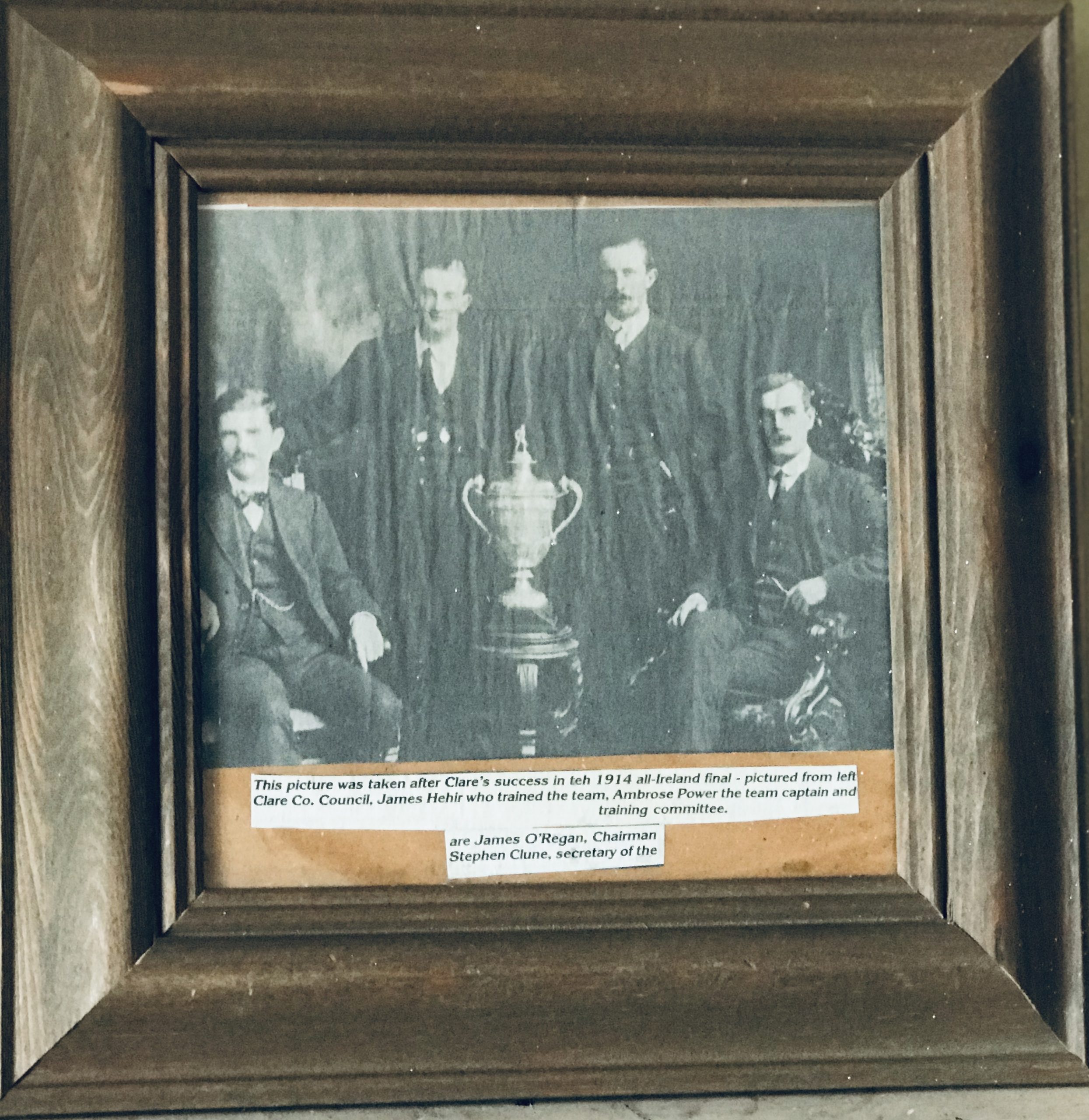 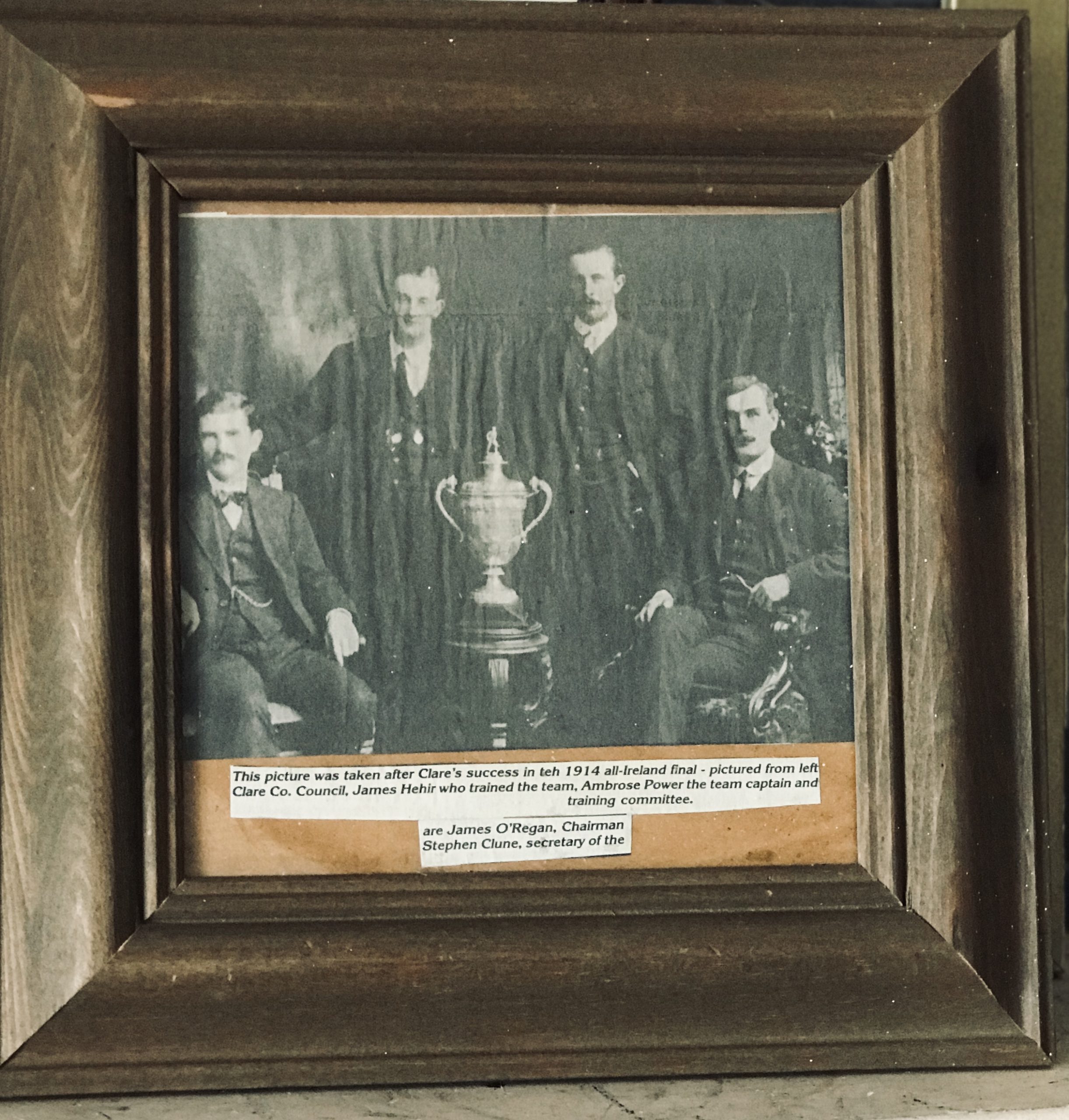 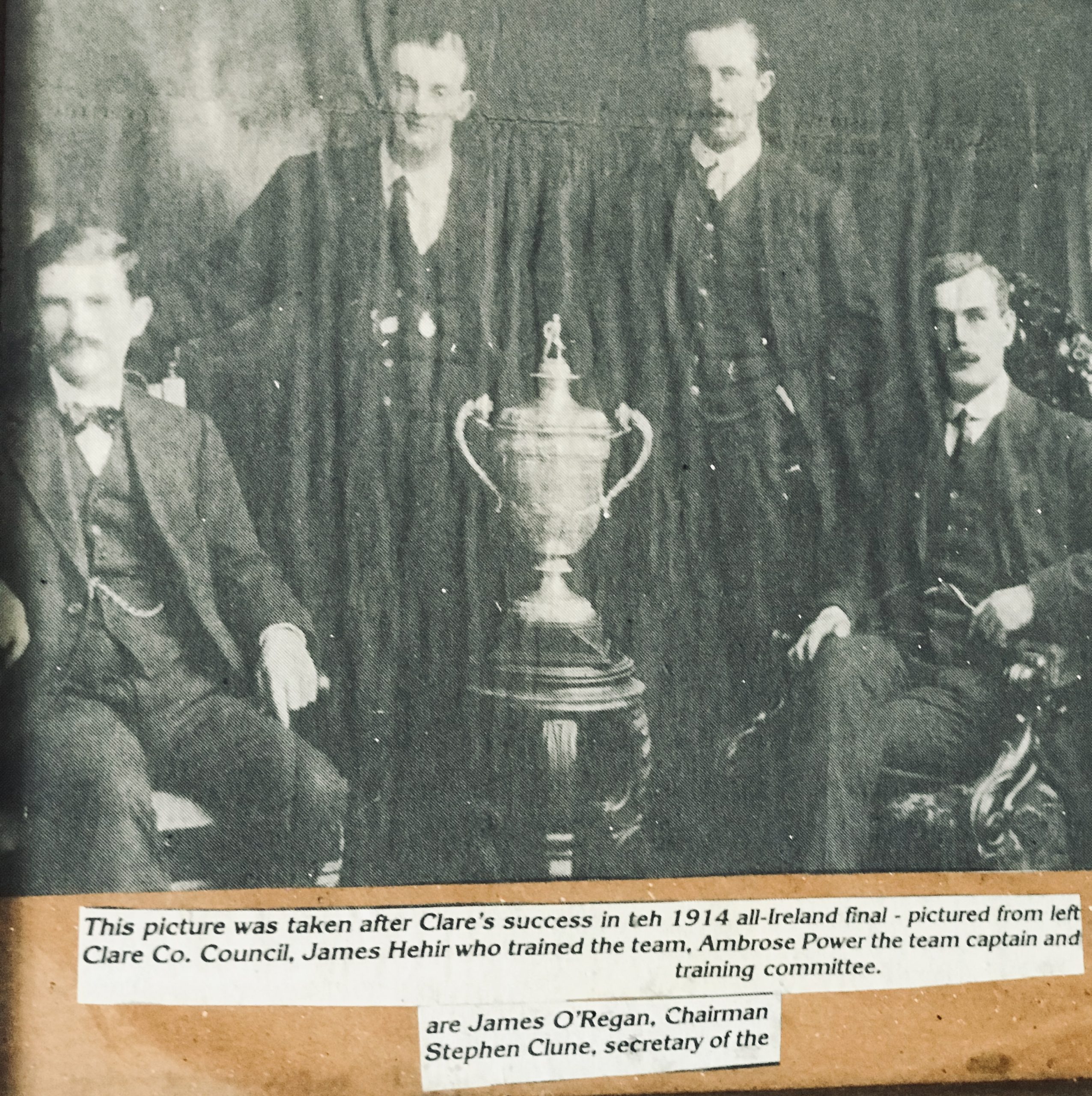