Beautiful and poignant collection of four of the 1916 Easter Rising Rebel Leaders who were executed by the British Crown Forces at Kilmainham Jail a few weeks later.Featured here are Padraig Pearse,Thomas Clarke,James Connolly and The O’Rahilly(not executed but who was killed in action at the GPO).

Thomas James Clarke ( 11 March 1858 – 3 May 1916) was an Irish republican and a leader of the Irish Republican Brotherhood from Dungannon, County Tyrone. Clarke was arguably the person most responsible for the 1916 Easter Rising. A proponent of armed struggle against British rule in Ireland for most of his life, Clarke spent 15 years in English prisons prior to his role in the Easter Rising, and was executed by firing squad after it was defeated.

Clarke was born at Hurst Castle, Milford-on-Sea, Hampshire, England, opposite the Isle of Wight, to Irish parents,Mary Palmer and James Clarke, who was a sergeant in the British Army. In 1865, after spending some years in South Africa, Sgt. Clarke was transferred to Dungannon, County Tyrone, Ireland, and it was there that Tom grew up.

Wicklow granite memorial dedicated in 1987 in Manorville, New York at the site of his 60-acre farm.

In 1878, at the age of 20, he joined the Irish Republican Brotherhood (IRB) following the visit to Dungannon by John Daly, and by 1880 he was centre (head) of the local IRB circle. In August that year, after a member of the Royal Irish Constabulary (RIC) had shot and killed a man during riots between the Orange Order and the Ancient Order of Hibernians in Dungannon, Clarke and other IRB members attacked some RIC men in Irish Street. They were driven back, however, and Clarke, fearing arrest, fled to the United States.

In 1883, Clarke was sent to London, under the alias of “Henry Wilson”,[5] to take part in the Fenian dynamite campaign advocated by Jeremiah O’Donovan Rossa, one of the IRB leaders exiled in the United States. British authorities were already following those involved, aided by informants, and Clarke was arrested in possession of dynamite, along with three others. He was tried and sentenced to penal servitude for life on 28 May 1883 at London’s Old Bailey.He subsequently served 15 years in Pentonville and other British prisons. In 1896, he was one of only five remaining Fenian prisoners in British jails and a series of public meetings in Ireland called for their release. At one meeting, John Redmond MP, leader of the ParnelliteIrish National League, said of him: “Wilson is a man of whom no words of praise could be too high. I have learned in my many visits to Portland for five years to love, honour and respect Henry Wilson. I have seen day after day how his brave spirit was keeping him alive … I have seen year after year the fading away of his physical strength”.

Following his release in 1898 he moved to Brooklyn in the United States where he married Kathleen Daly, 21 years his junior, whose uncle, John Daly, he had met in prison. Clarke worked for the Clan na Gael under John Devoy. In 1906 the couple moved to a 30-acre (120,000 m2) farm in Manorville, New York, and bought another 30 acres (120,000 m2) there in 1907, shortly before returning to Ireland later that same year. In Ireland, Clarke opened a tobacconist shop in Dublin and immersed himself in the IRB which was undergoing a substantial rejuvenation under the guidance of younger men such as Bulmer Hobson and Denis McCullough. Clarke had a very close kinship with Hobson, who along with Seán MacDermott, became his protegé.

Clarke supported the striking members of the Irish Transport and General Workers’ Union during the 1913 Dublin Lockout and refused to sell copies of the Irish Independent, a newspaper owned by union-busting industrialist and press baron William Martin Murphy, at his tobacco shop.

When the Irish Volunteers were formed in 1913, Clarke took a keen interest, but took no part in the organisation, knowing that as a felon and well-known Irish nationalist he would lend discredit to the Volunteers. Nevertheless, with MacDermott, Hobson, and other IRB members such as Eamonn Ceannt taking important roles in the Volunteers, it was clear that the IRB would have substantial, if not total, control, (particularly after the co-option of Paidraig Pearse, already a leading member of the Volunteers, into the IRB at the end of 1913). This proved largely to be the case until leader of the Irish Parliamentary Party, John Redmond, demanded the Provisional Committee accept 25 additional members of the Party’s choosing, giving IPP loyalists a majority stake. Though most of the hard-liners stood against this, Redmond’s decree was accepted, partially due to the support given by Hobson. Clarke never forgave him for what he considered a treasonous act.

Following Clarke’s falling out with Hobson, MacDermott and Clarke became almost inseparable. The two of them, as secretary and treasurer, respectively, de facto ran the IRB, although it was still under the nominal head of other men: James Deakin, and later McCullough. In 1915 Clarke and MacDermott established the Military Committee of the IRB to plan what later became the Easter Rising. The members were Pearse, Ceannt and Joseph Plunkett, with Clarke and MacDermott adding themselves shortly thereafter. When the old Fenian Jeremiah O’Donovan Rossa died in 1915 Clarke used his funeral (and Pearse’s graveside oration) to mobilise the Volunteers and heighten expectation of imminent action. When an agreement was reached with leading Marxist James Connolly and his Irish Citizen Army in January 1916, Connolly was added to the committee, with Thomas MacDonagh added at the last minute in April. These seven men were the signatories of the Proclamation of the Republic, with Clarke as the first signatory. It has been said that Clarke indeed would have been the declared President and Commander-in-chief, but he refused any military rank and such honours; these were given to Pearse, who was more well-known and respected on a national level. Kathleen Clarke later claimed that her husband, and not Pearse, was first president of the Irish Republic.

Clarke was located at headquarters in the General Post Office (GPO) during the events of Easter Week, where rebel forces were largely composed of Irish Citizen Army members under the command of Connolly. Though he held no formal military rank, Clarke was recognised by the garrison as one of the commanders, and was active throughout the week. Late in the week, the GPO had to be evacuated due to fire. The leaders gathered in a house in Moore Street, from where Pearse ordered the surrender on 29 April. Clarke wrote on the wall of the house, “We had to evacuate the GPO. The boys put up a grand fight, and that fight will save the soul of Ireland.”He was arrested after the surrender. He and the other commanders were taken to the Rotundawhere he was stripped of his clothing in front of the other prisoners. He was later held in Kilmainham Gaol. He was court-martialled and executed by firing squad, along with Pearse and MacDonagh on 3 May 1916. Before his execution, he asked his wife Kathleen to convey a message to the Irish people: “My comrades and I believe we have struck the first successful blow for freedom, and so sure as we are going out this morning so sure will freedom come as a direct result of our action…In this belief, we die happy.”

After her husband’s execution, Kathleen Clarke was elected a TD in the First and Second Dála, notably speaking against the Anglo-Irish Treaty. 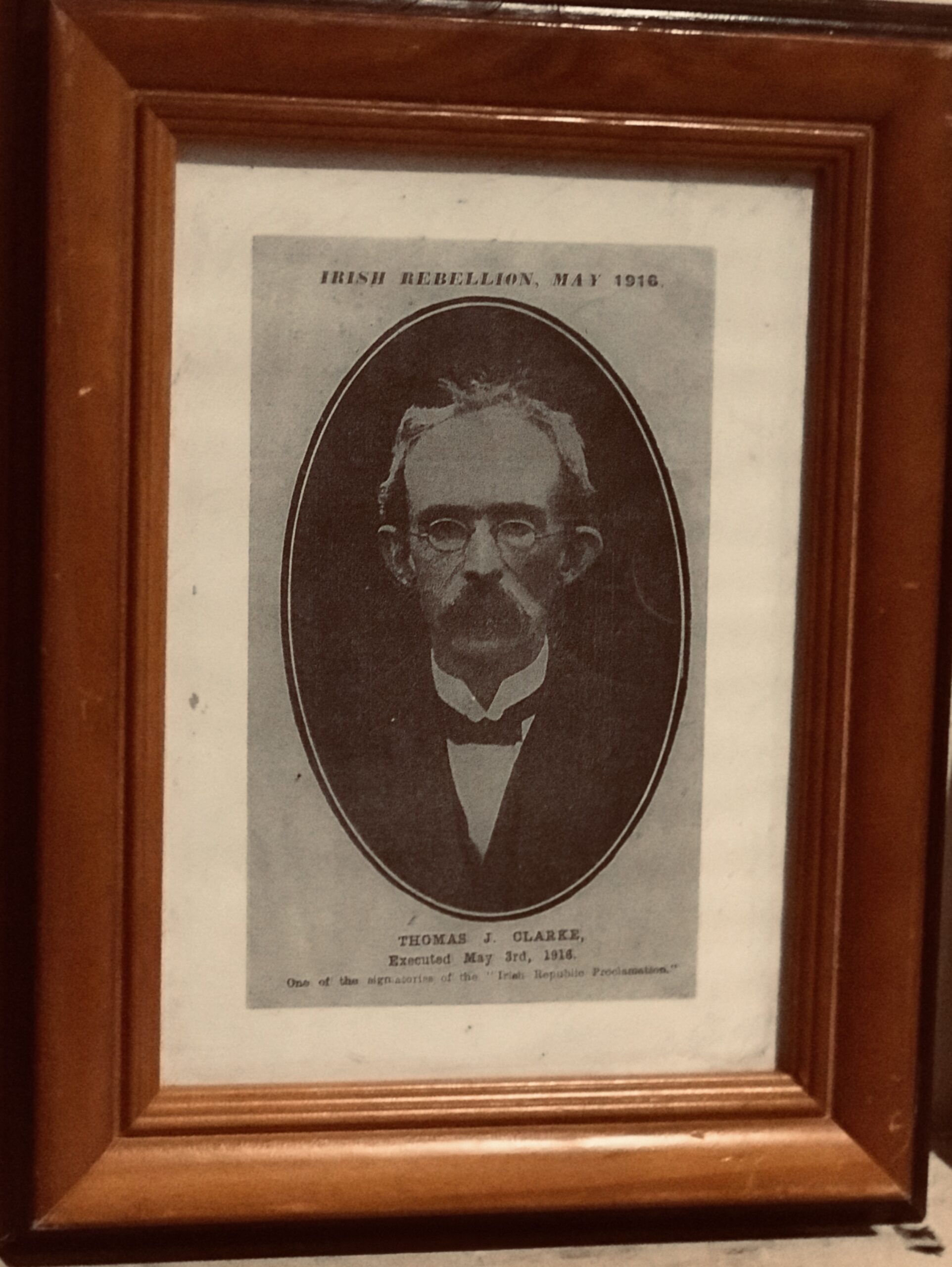 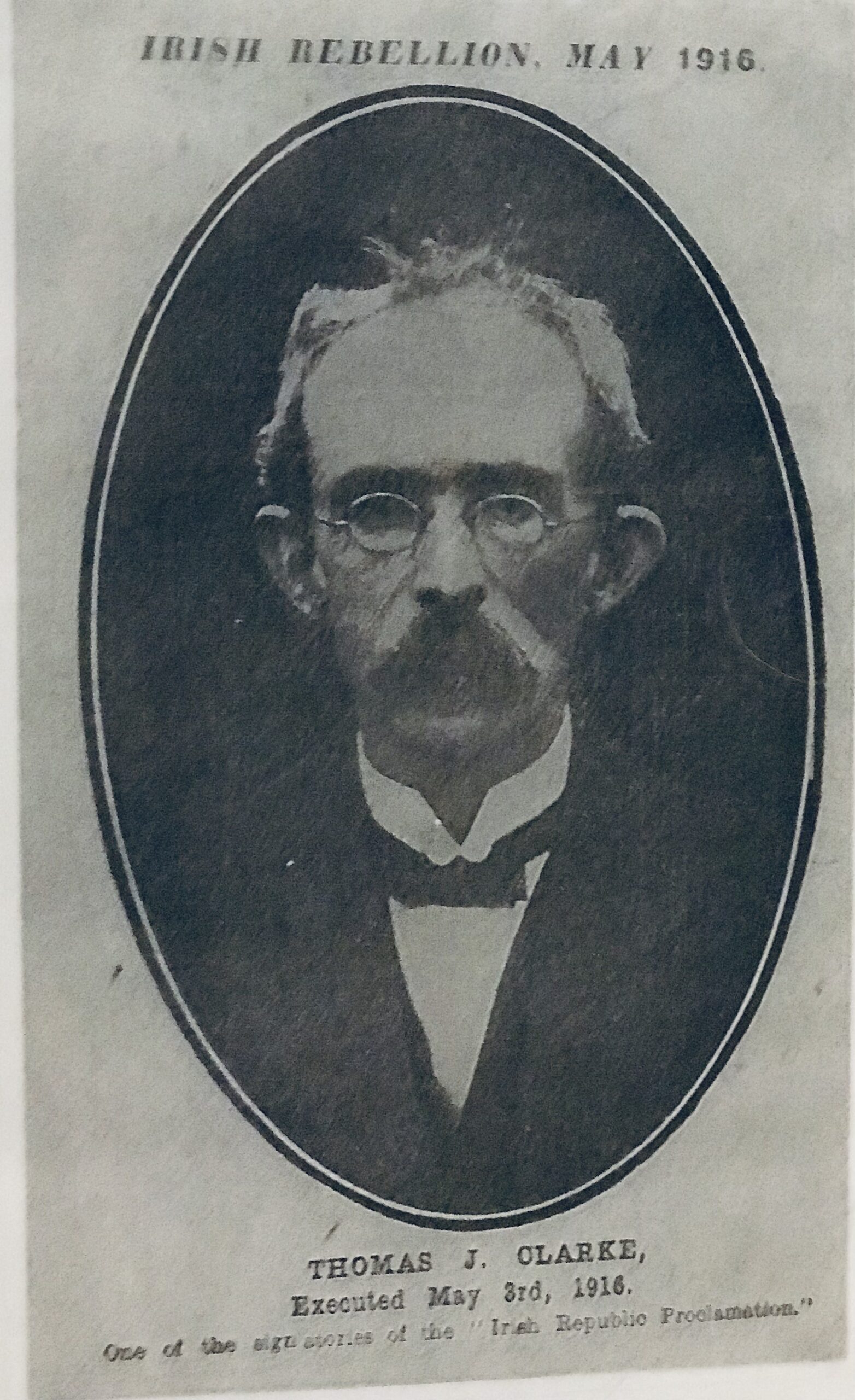