On 17 December 1916, the week before Christmas, a Mayo team stepped onto a frost-bitten Croke Park pitch to break new ground not only for themselves, but for their province – somewhat remarkably, in the already storied history of the Gaelic games, no Connacht county had previously climbed to such a rarefied heights. Mayo’s maiden final was played on a day that was winter raw. As snow, hail and rain fell in turns, the low temperatures left the ground underfoot little short of treacherous.

Already, the belt of miserable weather had taken chunks out of England’s soccer programme the day before and in Dublin, on the morning of the final, hospitals filled with those presenting with injuries from falls on ice-glazed pavements, many of them worshippers walking to and from Sunday services. There was tragedy, too, when three residents of the Peaumont Sanitorium drowned when treading the frozen surface of a pond that cracked and gave way beneath them.

In ordinary circumstances, most likely, the All-Ireland final meeting of Mayo and defending champions Wexford wouldn’t have gone ahead. But these were not ordinary circumstances and this was no ordinary time. The backdrop was one of international war and domestic upheaval and for the GAA, the struggle to maintain a semblance of normality – to operate a schedule of fixtures free of disruption and delay – was a constant.

It didn’t help that the official Commission of Inquiry into the April Rebellion identified the Association as a contributory factor in its outbreak. It was a finding that the GAA leadership robustly refuted, their cool-headed pragmatism leading them not only into a denial of any involvement in the Rising, but to openly enter into negotiations with the British authorities in an effort to fend off threats to their sporting operations. What the GAA sought to secure as priorities was an exemption from a new entertainment tax that was to be levied on sporting and recreational bodies across Britain and Ireland; and an end to the curtailment of special train services to GAA matches. If the actions of the GAA emphasised the primacy of play, those of the British authorities – in London and Dublin – laid stress on law and order, and on the monitoring and the suppression of anything, or anyone, who might undermine it. Towards that end, in the months following the Rising, police reports tumbled into Dublin Castle evaluating the political temperature in each county and detailing the organisational strength of the various social, cultural and political groupings within. Statement issued by the GAA in May 1916 in response to allegations made by the Rebellion Commission, set up by the British to investigate the Rising, that the GAA was involved in the planning and staging of the Easter Rising. In this statement the GAA strenuously expresses its non-political constitution. Click the image to read the statement in full. (Image: GAA)

Reports from Mayo in the summer of 1916 revealed a county in a ‘peaceable’ condition and with, amongst other things, a thriving GAA community: in all, the county was said to have boasted 18 clubs with just over 1,000 members. The strongest of these clubs was undoubtedly Ballina Stephenites. Founded in 1888, they had dominated the local Mayo scene since the turn of the 20th century, and spent years scorching all Connacht opposition at a time when champion clubs also served as county representatives in provincial and All-Ireland competitions.

In 1908, they even secured national honours when defeating Kerry in a Croke Memorial Cup final. This was a day when at least one journalist – a reporter for the Western People – parked his professionalism in favour of partisan self-indulgence. Disabusing his readers of the expectation that they might receive anything in the way of actual reportage, he wrote: ‘I put my notebook away when Andy Corcoran (the captain) won the toss, and thereafter, along with hundreds of others, I abandoned myself to an hour’s delightful cheering and yelling.’ If this was primarily a Ballina triumph, the joy was by no means confined to the town. In Crossmolina a tar barrel was set alight to honour a moment that created ripples of excitement across the county.

By 1916, the Mayo team was still backboned by Ballina men, though it was bolstered – as was then commonplace – by select players from rival clubs, including Balla, Ballyhaunis, Kiltimagh, Lacken and Swinford. It appears not to have been the most harmonious of mixes. When they took the field in Castlerea against Roscommon for the Connacht final at the start of October, they were a seriously depleted outfit – seven of those selected to travel failed to show up and a further two refused to tog out. As it transpired, the team was plagued by unwanted controversy. Later, when they defeated Cork in the All-Ireland semi-final, they were forced to do it all over again – on a day so sodden the referee wore his Mackintosh throughout – after an objection was lodged that they had played an illegal player in Bernard Durkin, a Mayo native who had earlier the same year played in a Cork County Championship for Youghal.

For all that the extra game stood to Mayo, it also exposed weaknesses that could only be addressed, many believed, by better preparation. The message that went out was clear-cut. As one GAA writer put it starkly:
‘The war cry for the present Mayo team is – Train! Train! Train!’ There was nothing particularly sagacious in this advice; most of the top teams were already doing this as a matter of course. However, the problem for Mayo was that, whatever way you looked at it, they appeared to be starting from a poorer position than their final opponents. Nowhere was the disparity more striking than in the resources available to the two sides. Wexford had raised £100 in subscriptions and secured a grant of £25 from the Leinster Council before a cash-strapped Mayo had gotten out of the fundraising blocks. It was late November, less than a month before the final, when the county eventually launched a training fund to help defray the costs of organising trial matches against their provincial neighbours and to ensure, as one contributor put it, that they didn’t suffer from a ‘lack of the sinews of war’. Clubs and the county board established committees to solicit money and commitments were given that all contributions would be dutifully acknowledged in the local press. That they were, but the purpose of publication was as much to shame as name. Indeed, slackers were unrepentantly called out. So while the people of Ballina and Crossmolina won plaudits for their efforts, those from Foxford stood indicted: ‘There’s an old saying that “apples will grow again”’, one scribe observed. ‘When they do they won’t ripen in Foxford.’ The final, when it finally arrived, disappointed in every way. Despite the temporary easing of train restrictions that had already forced the deferment of the hurling decider until late January 1917, it was played before a small crowd of 3,000 and on a pitch that barely cut muster. The conditions undoubtedly conspired against good football, yet the match itself was, as one report had it, remarkable only for its ‘tameness’. It’s perhaps sufficient to say the outcome was never in doubt and that the Wexford-men won, on a 3-4 to 1-2 score-line, easing up.

The Mayo players were not exactly crestfallen at the result. There was no wailing, no recrimination, no burning regret at perhaps a once in a lifetime opportunity squandered. Theirs was not a house of pain.

On the night of their final they happily joined with the Wexford players at an ‘all night dance’ at Conarchy’s Hotel on Dublin’s Parnell Square. And their captain, Frank Courrell, expressed himself pleased with his team’s performance. The players, he felt, had acquitted themselves well as individuals if not as cohesive unit. In any case, as Courell himself confessed, they had never come to Dublin ‘with the idea of beating Wexford’. Not a bit of it. ‘We came with one object’ Courrell said, ‘to fight every inch of the ground and go down gamely, and we did. We Connachtmen pride ourselves on the fact that we entered the final for the first time, and we are not a bit downhearted on our defeat by such a splendid side.’ 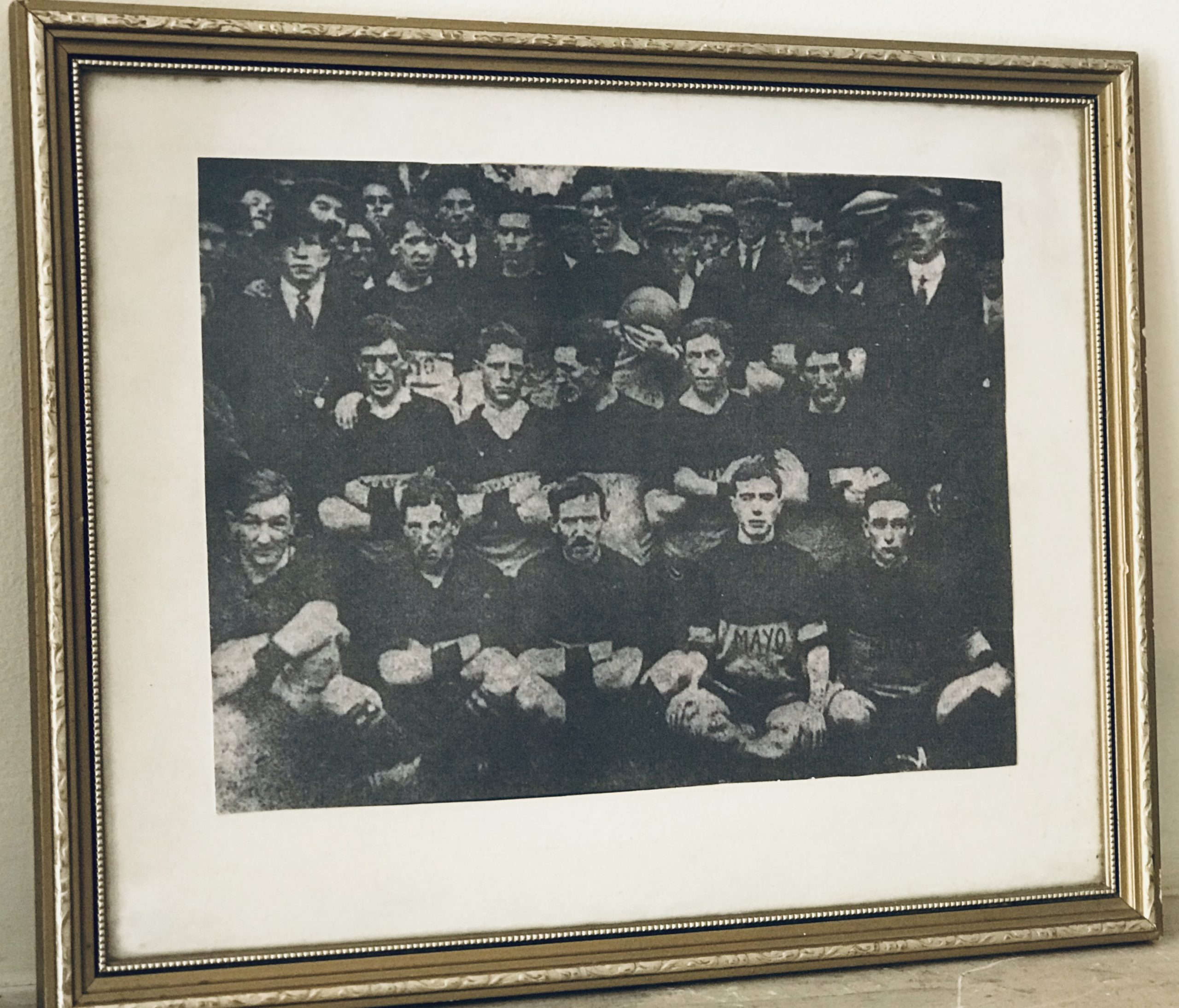 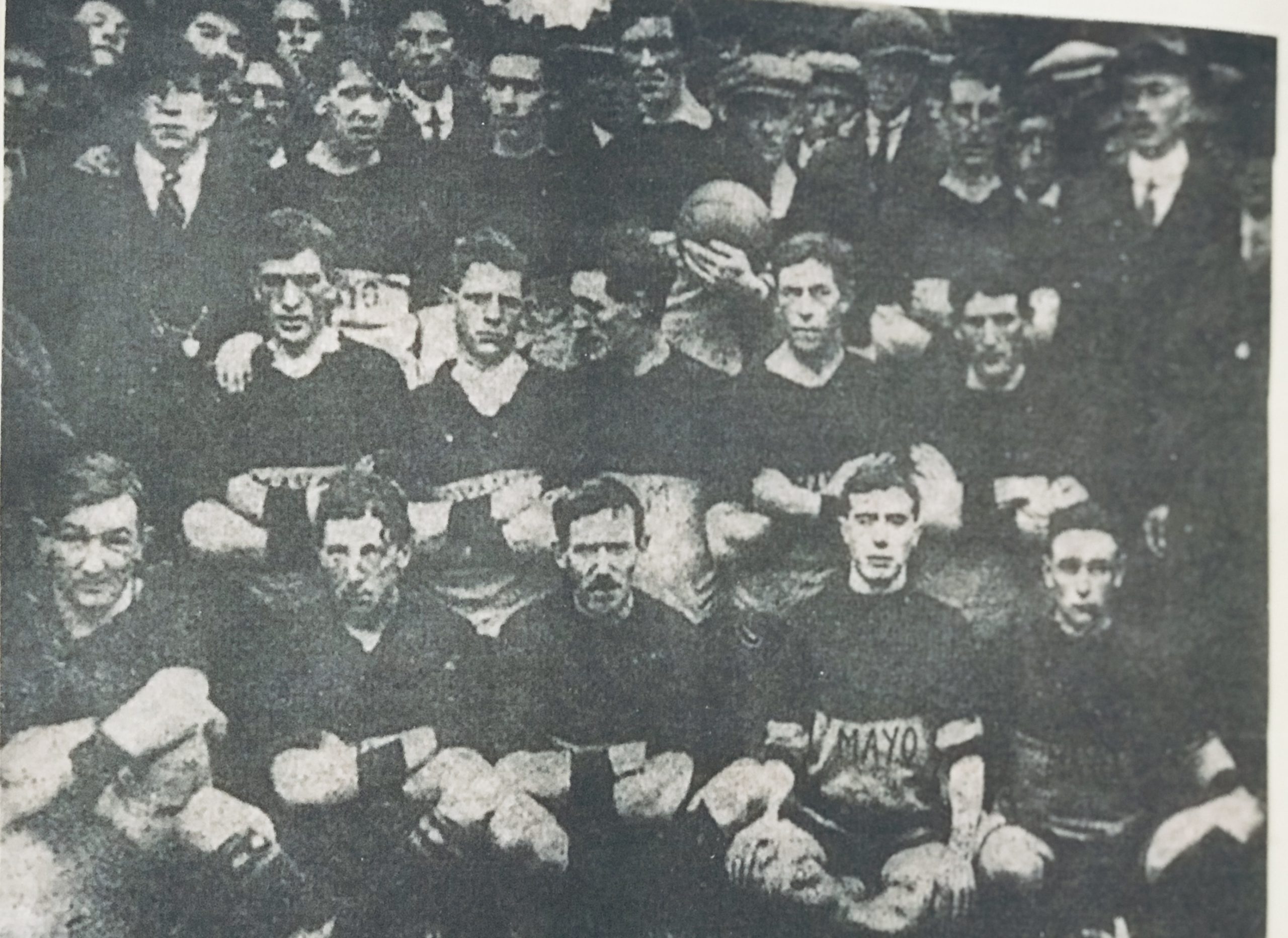 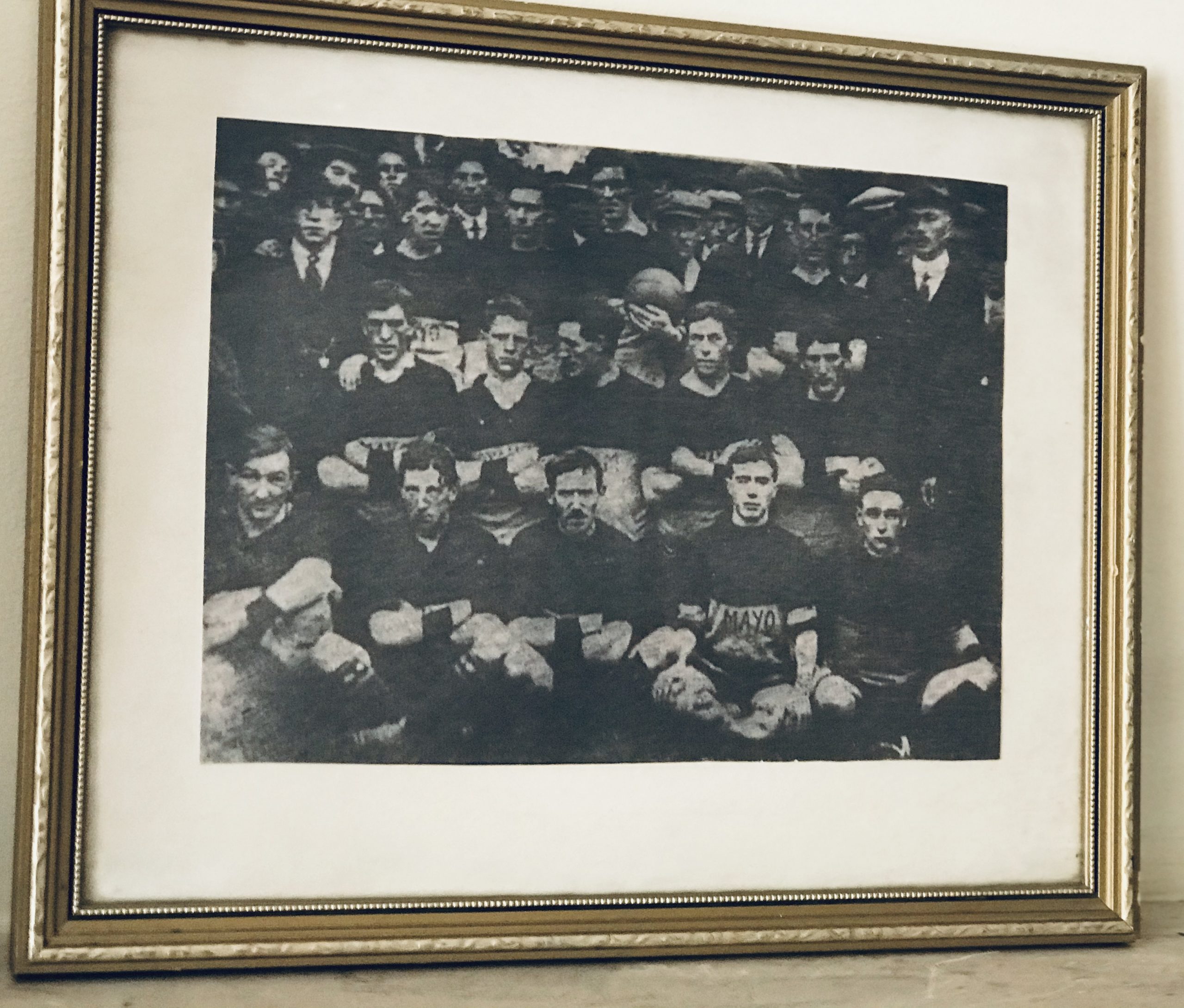