You’ll Never Beat the Irish -Republic of Ireland Autographed Squad Photo circa 1994 en route to the World Cup in USA.

Back in 1986, with Northern Ireland celebrating a second consecutive World Cup qualification, the Republic was the poor relative, in debt, in decline, and with a lot of empty seats and coffers to fill.

Step forward Jack Charlton, the nation’s first-ever foreign manager. As Niall Quinn says, “he was big, he was blunt, he was English.”

Despite that, Charlton knew he would be accepted very quickly by his new congregation after walking through Dublin’s main thoroughfare in O’Connell Street.

“The Irish people are very close in character to the Geordie,” Charlton said. “They are very welcoming to strangers, they’re not false, they like a pint and a laugh and a party.”

So began a decade long celebration that lifted the Boys in Green to the top eight teams in the world for one brief but beautiful moment. 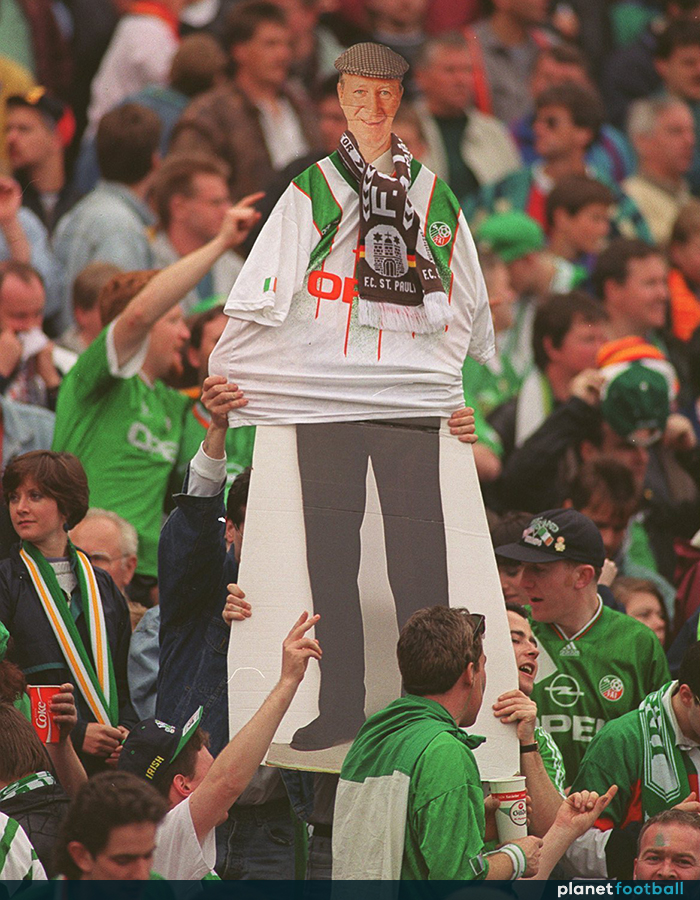 Charlton had beaten late entrant Bob Paisley, a multiple trophy winner, to the FAI hot seat, and his introduction to the gathered press was a million miles away from the carefully staged managed productions of the modern day.

In fact, it almost turned into an impromptu David Haye and Tony Bellew pre-match fight when Charlton challenged hardened journalist and ex-international Eamon Dunphy’s line of questioning. That relationship turned increasingly sour as time went by.

Shamrock midfielder Pat Byrne recounted to the Irish Times just how unwavering the new manager was about tactics: “He made it very clear that first time on the training ground that ‘we are not going to have any nice stuff here.

“We’re going to close everything up and we’re going to turn the whole backline; as soon as they’re turned, we’re on our way.” 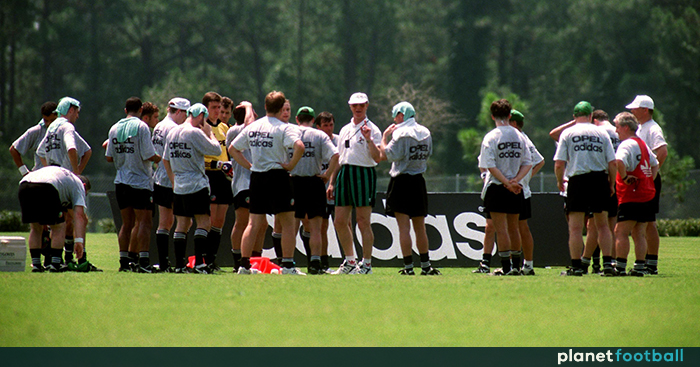 This was the blueprint – or greenprint – of the Irish national team for the next decade.

Former players like Johnny Giles thought this indicated a lack of trust in the ability of players. Charlton saw it as pragmatic. His idea was to keep information and instruction simple.

There were some aesthetes in the team, most notably an ageing Liam Brady, who were initially unnerved and eventually sidelined by this move away from playing from the back.

Players such as Brady would send over the free-kicks and corner-kicks that were central to the game plan, while Mick McCarthy could launch a good old long throw into the mixer. Keeper Packie Bonner was told “to kick every ball long, as high as you can into their half of the park.”

To make the game work, the new manager needed to find quality players outside of the League of Ireland.

Players were recruited through notices that were put up around grounds. John Aldridge and Ray Houghton were both gathered from Oxford United.

Big Jack’s “Find Another Irishman” policy via the Granny rule was worked to the Mrs Brown bone. 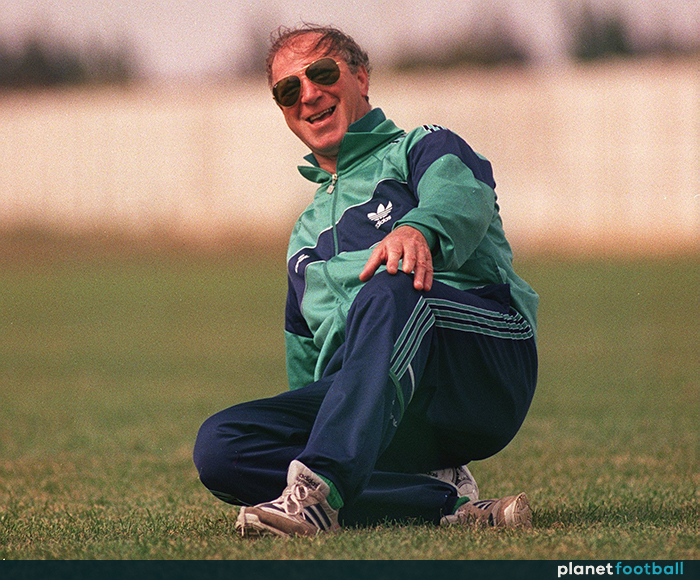 After a 1-0 defeat to Wales in his first match in charge, Charlton got to work on qualifying for the 1988 European Championship in West Germany.

The Republic finished top of their group, ahead of a talented Belgium side who had reached the semi-finals of the ‘86 World Cup. This was Ireland’s first ever appearance at a major championship finals.

City and town streets were deserted for matches as the tournament got off to the best possible start against England. Nobody does spontaneous parties like the Irish.

The winning goal pretty much summed up Eire’s raison d’etre, as described by UEFA: “Kevin Moran took a free-kick and hit it long, Ireland’s main mode of attack.

“The ball fell to Tony Galvin, who hooked in a cross that Kenny Sansom inadvertently ballooned up in the air. John Aldridge headed it to Liverpool FC club-mate Ray Houghton, whose own header looped beyond Peter Shilton.”

It was like the international version of Liverpool v Wimbledon in the FA Cup final that year. 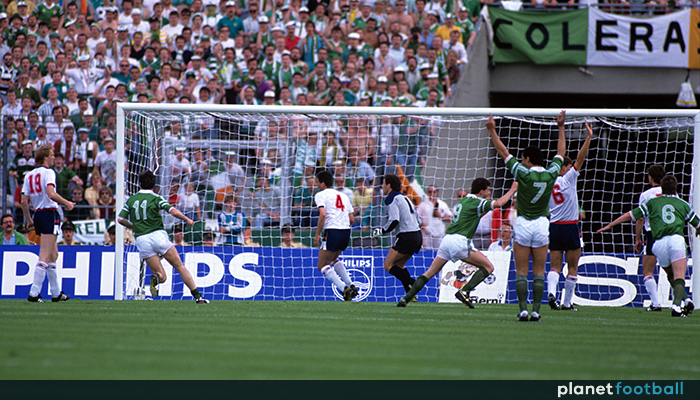 While England staggered to defeat against the USSR and Holland, the Irish matched both teams stride for stride. Houghton described the 1-1 draw against the Soviets as “one of the best performances I’ve ever been involved in with Jack’s teams”.

The Netherlands eventually broke Irish hearts with what Charlton described as “the greatest fluke of the year” when Wim Kieft headed in a bizarre 82nd-minute winner that was almost Irish in its conception.

Even so, Ireland had arrived with a bang. And if Euro 88 was the start of the journey, Italia 90 was the zenith.

The qualification group to make it to their first World Cup was straightforward enough, but their defensive resilience proved decisive as they conceded in only one match – the loss against Spain  – while John Aldridge and self-confessed “fake Irishman” Tony Cascarino did the business at the other end.

As the team landed in Sardinia, drawn yet again against England for the first match, Larry Mullen from U2 had produced a cracker of a team song called: “Put ‘em Under Pressure”, that topped the Irish charts for 13 weeks.

It wasn’t exactly “World in Motion”, but it was a great soundtrack to the joyous march of Jackie’s army. Their modus operandi was to “inflict our game on other people”.

Ultimately, the music and their fans were a damn sight more appealing than their football. But who cared if they could stay around a bit longer for another Guinness?

The England match was a bit of a non-event on the pitch, as Kevin Sheedy cancelled out Gary Lineker’s early goal, and it was followed by another flat performance in a goalless draw against Egypt.

Dunphy was openly critical of Charlton’s long-ball tactics, suggesting that “the style of the play didn’t reflect the quality of the players in the side.”

That simmering feud continued as the manager refused to take questions from the writer whom he later described as a “bitter little man”. 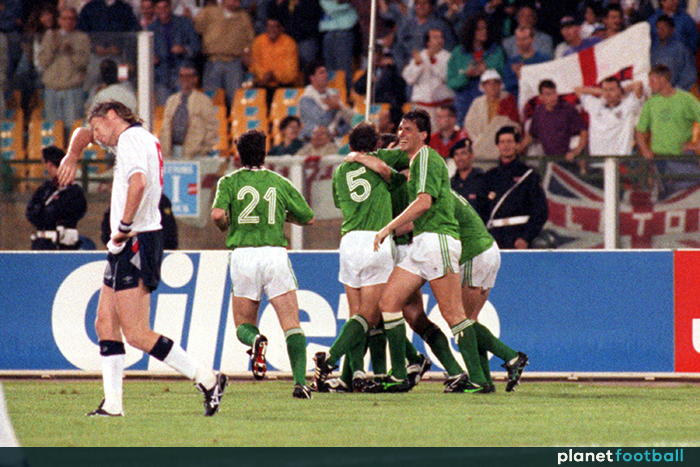 A 1-1 draw with the Dutch meant both teams had identical records as all three of Holland, England and Ireland progressed, with the Irish benefiting from the drawing of lots to qualify as group runners-up

After three drab stalemates, the party only truly began in Genoa against Romania in the last 16 – after another goalless game, Bonner saved Romania’s fifth penalty, leaving David O’Leary to take the decisive kick.

How ironic that the hero was O’Leary, another more football-minded defender that was often overlooked by Charlton.

O’Leary recalled: “There were about 20,000 brilliant Irish supporters behind the goal. They were so still and the eruption of green afterwards when the ball hit the net was absolutely amazing. It’s a fantastic memory.”

Things were about to get more surreal as Charlton had promised an audience with the Pope should his team make it to the last eight.

Perhaps Pope John Paul II, a goalkeeper in his youth, sought out Bonner about goal-line interventions rather than divine ones, but Ireland’s quarter-final against Italy in Rome was not tinged with any luck for the Celtic keeper, who could only parry Roberto Donadoni’s shot into the path of Golden Boot winner Toto Schillaci. It was a gallant defeat.

Skipper Andy Townsend recalled: “As we are all gathering up our bags, Jack turned round to Packie and said: ‘By the way, the f****** Pope would have saved that!’ 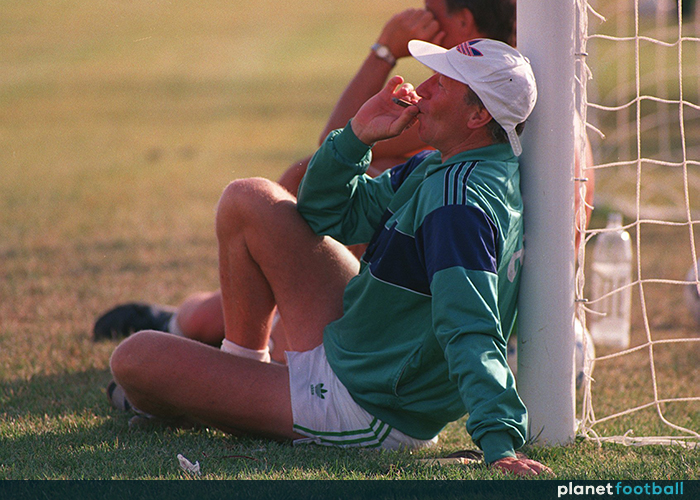 Ireland’s propensity to draw a large proportion of games (30 out of 93 under Charlton) cost them dearly in the 1992 Euro qualifying group as only eight teams could qualify for Sweden.

They finished behind Graham Taylor’s stodgy England team, despite drawing home and away against them.

However, the Republic were reaching a new peak, with a young Roy Keane and Denis Irwin introduced to the team.

“The worst thing about missing out on Euro 92 was that Denmark won it. It should have been Ireland.” recalled a frustrated manager.

In his final match as manager of Northern Ireland, Billy Bingham had the chance to prevent the South reaching the Stateside World Cup in ‘94.

Bingham inflamed the occasion by branding their players “a bunch of mercenaries”, declaring his intention to “stuff the Republic”.

So hostile was the atmosphere that Pompey midfielder Alan McLoughlin later declared that the “safest place to be was on the pitch”.

The match finished 1-1 which was enough for the Green Army to secure a front row seat for Diana Ross’s open-goal miss. Charlton confronted Bingham immediately after the match and said: “Up yours too” – although he later apologised. 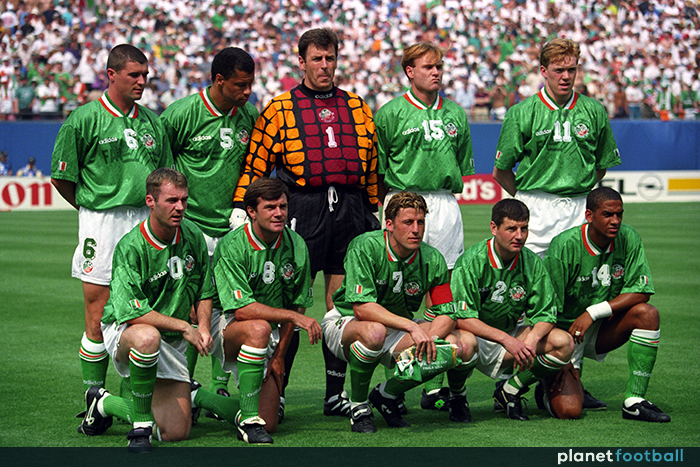 In the USA, the party started early in New York as Italy were beaten in the Big Apple by a Houghton strike.

Patrick Barclay summed it up best in The Observer: “Ireland’s blanket defence rendered vain all the creative endeavours of Roberto Baggio, who adorned this marvellous occasion but was not allowed to influence it because for 90 mins Jack Charlton’s sweat-soaked soldiers stayed about as close as ranks can get.”

Unfortunately, Ireland’s performances tailed off dramatically for the remainder of the tournament.

Such draining tactics were hard to administer in the humidity of Orlando, and the manager was banned from the touchline for venting his fury at officials over the lack of water for his troops against Mexico.

After squeezing through the group following a goalless draw with Norway, the Green bus ran out of fuel against the Dutch in the last 16. 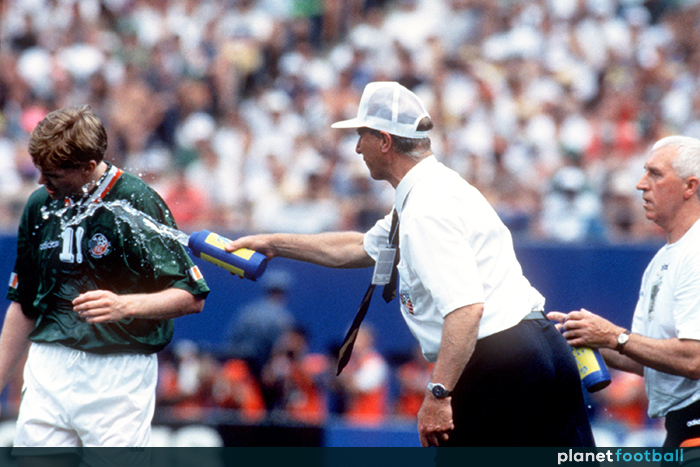 Beginning of the end

The mid-90s were the beginning of the end for JC’s JCB formation.

Lying in wait, yet again, were their old adversaries, Holland. While the Dutch were winning their last three qualifiers without conceding a goal, the Republic had stumbled through their last five matches, drawing in Liechtenstein and losing 3-1 home and away to Austria and 3-0 to group winners Portugal

Anfield was the “neutral” venue for the play-off and the stadium was the backdrop to a pretty decent cover version of Fields of Athenry that evening.

Unfortunately, injuries to crucial players like Roy Keane and Steve Staunton stymied the tactics as Charlton packed the midfield with defenders. It didn’t work.

The Dutch were comfortable 2-0 winners as a teenage Patrick Kluivert exposed the limitations of the press and punt tactics. The headline in the Irish Times was Ninety Minutes Chasing Shadows.

“In my heart of hearts, I knew I’d wrung as much as I could out of the squad I’d got – that some of my older players had given me all they had to give,” Charlton said.

Big Jack’s signing-off got the send-off it deserved with rousing renditions of You’ll Never Walk Alone.

Ultimately, Charlton, who was made an honorary Irishman, had good memories and very few regrets: “I can’t remember losing with Ireland. All I can recall are victories, celebrations and getting the right results against all the odds.” 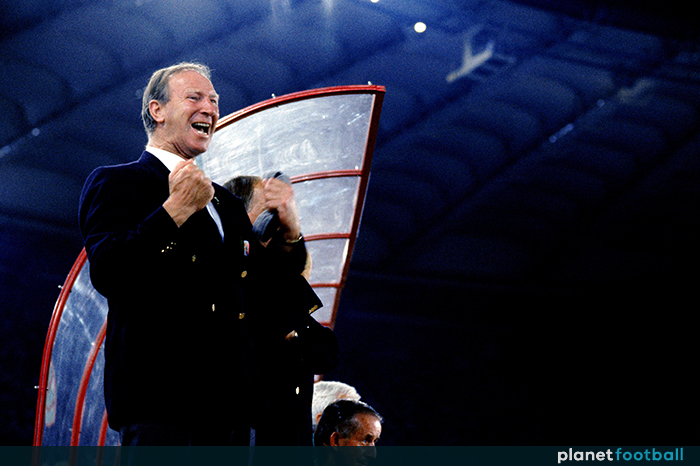 It is sometimes opined in retrospect that the Republic could have done better with the quality of players at their disposal. They only won one of nine World Cup matches, scoring just four goals.

After USA’ 94, Dunphy said: “The minority who know their football well enough to distinguish between fact and fantasy have long since decided that even though the show is great, the football of the Charlton era has been, too often, lousy.”

But would liberation have taken away the organisational pragmatism that was central to the Green Wall being breached just 41 times in 93 games? After all, this was a team that also beat Brazil at home and Germany in Hannover.

Niall Quinn said: “We were happy as we were – beautiful, skilled losers.”

Big Jack made them coarse but clinical winners on the pitch and a lot happier off it.

11 of Jack Charlton’s best quotes: ‘Can we go now please? I’d like a beer’ 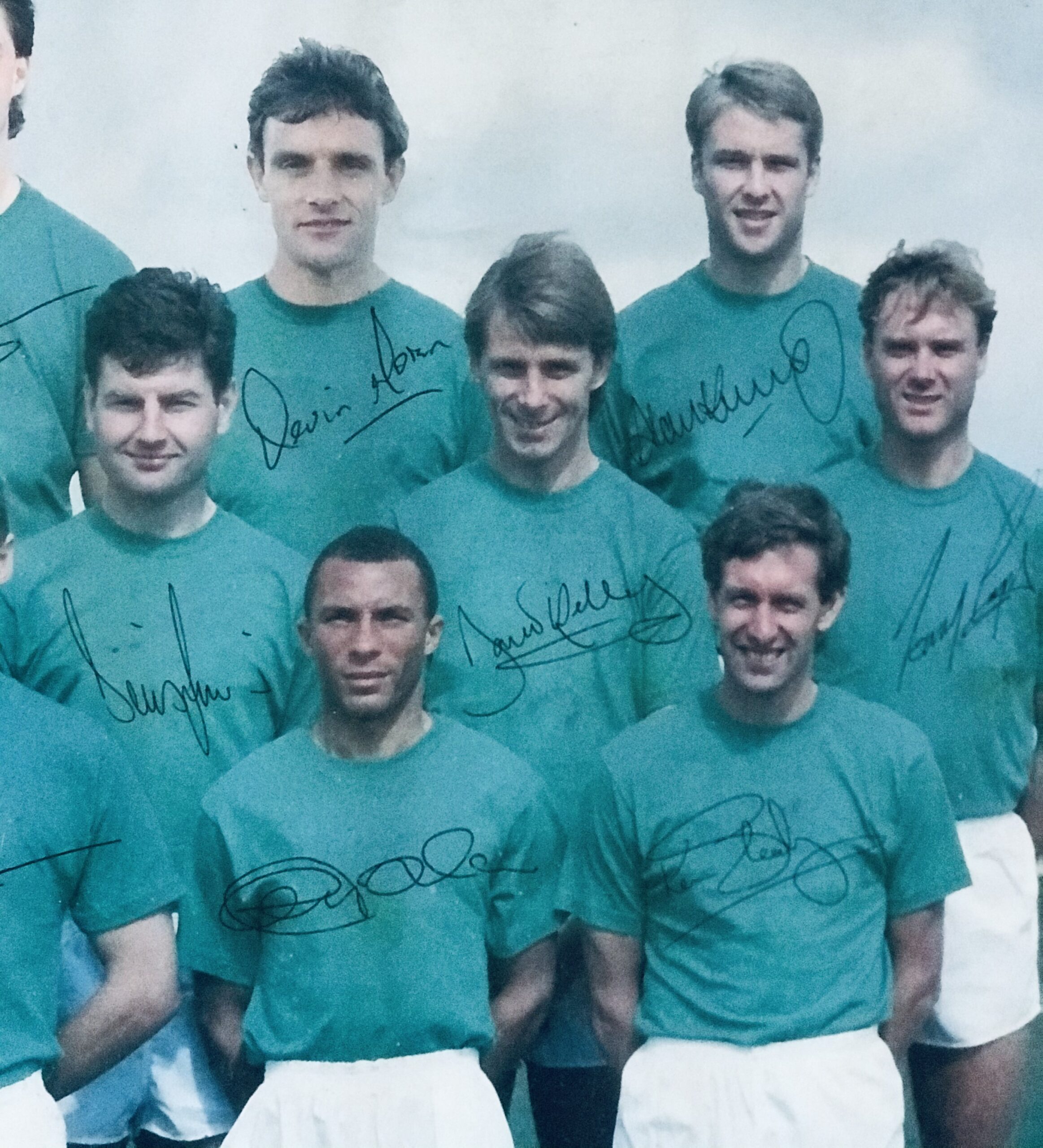 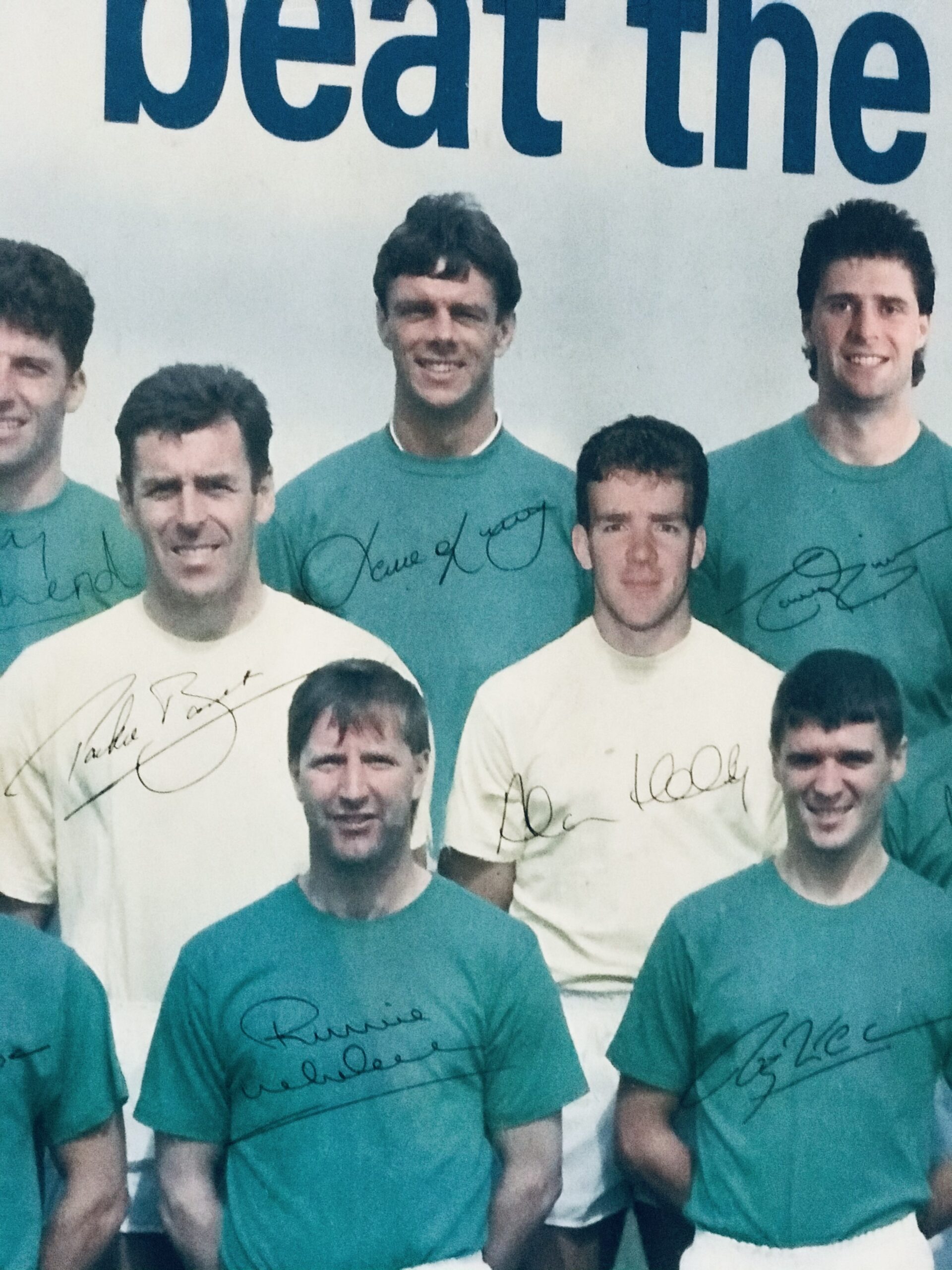 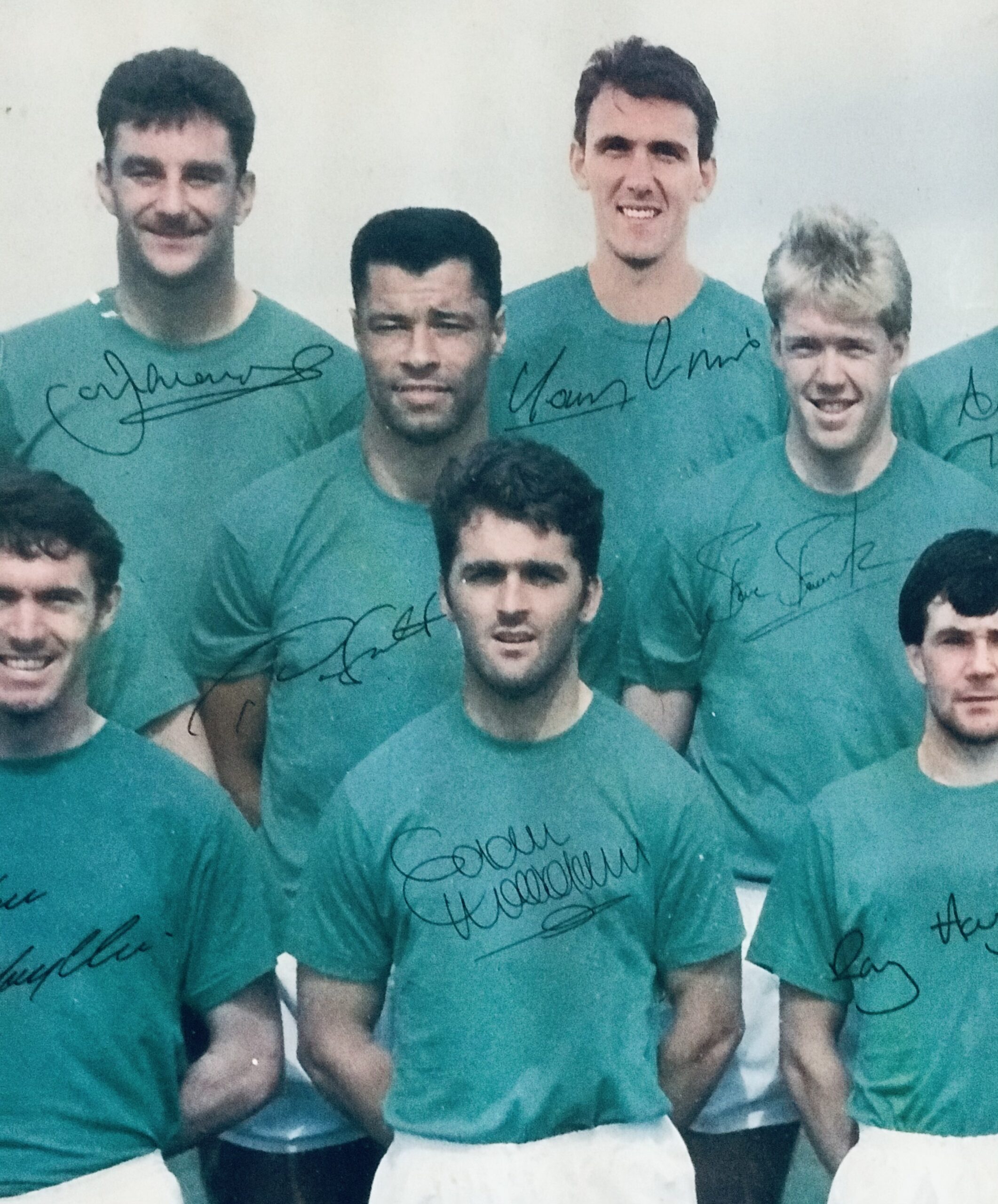 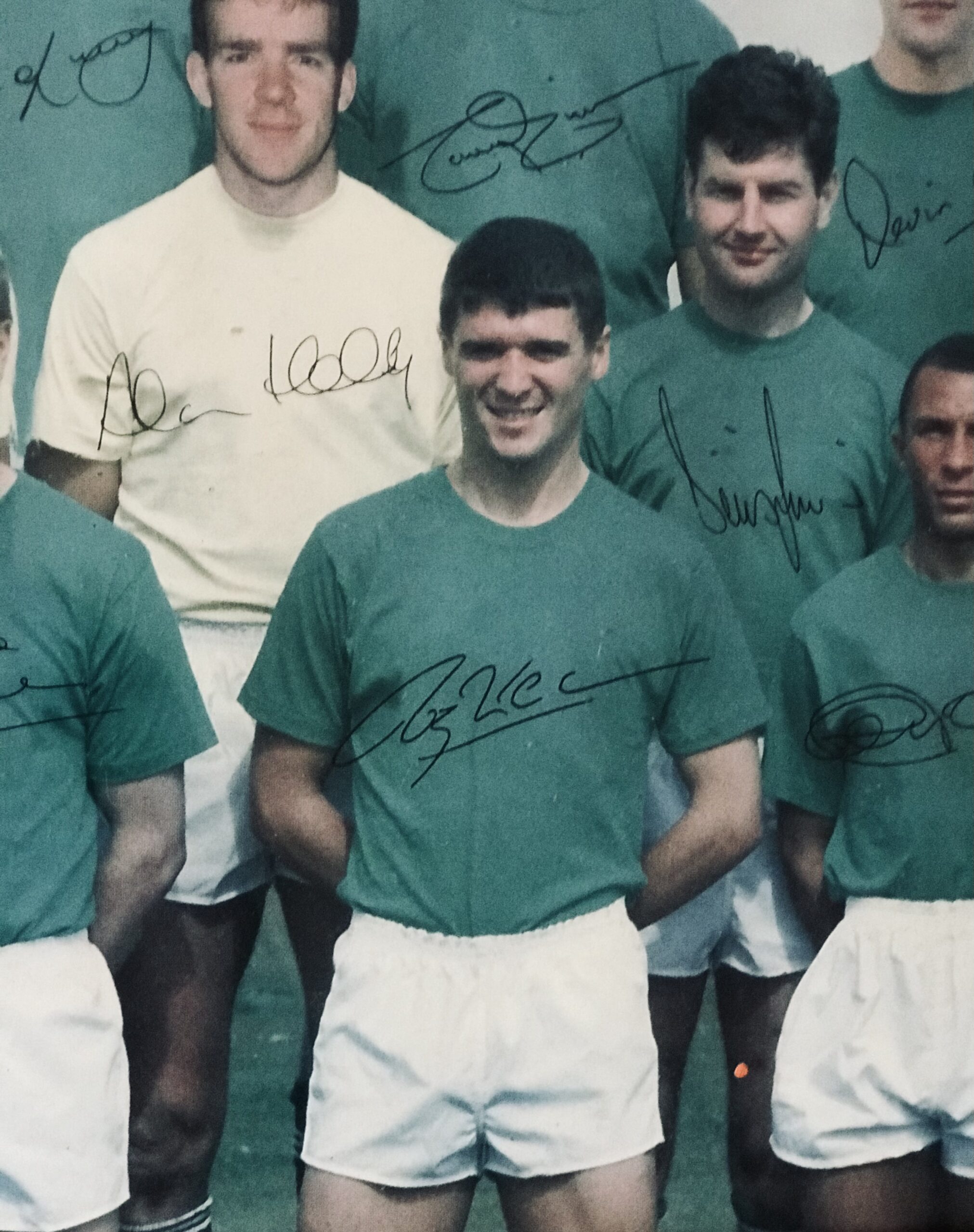 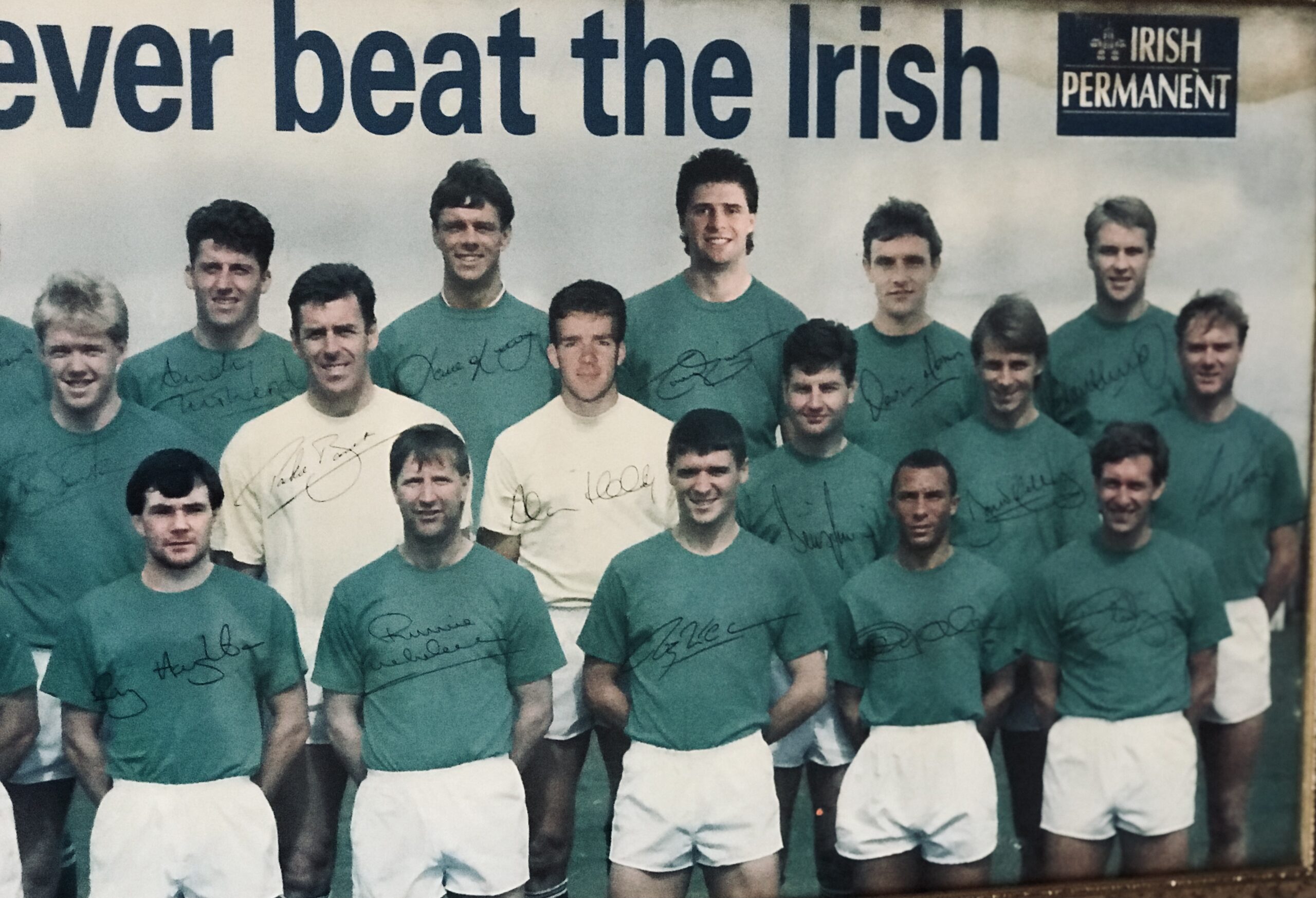 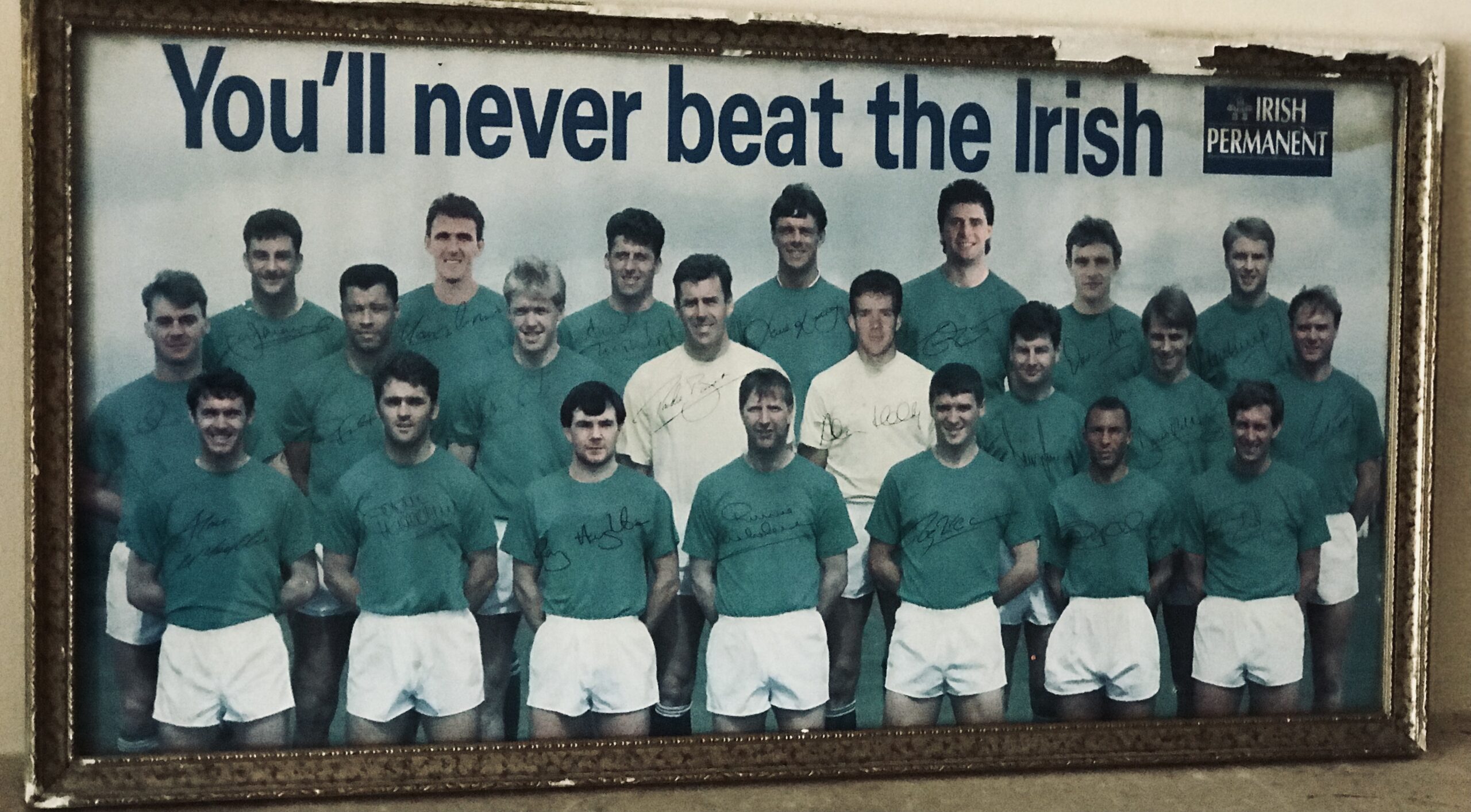