“The Holland-America Line, a steamship company with passenger and freight steamers plying between Rotterdam and New York, is the only steamship line carrying emigrants from the Netherlands to the United States of America.

Emigrants from the interior of the continent of Europe, who purchase their steamship tickets from the branch offices of the Holland-America Line in Germany, Austria, Switzerland, and Italy, arrive in Rotterdam on international trains, in which several cars have been set apart for their accommodation, from five to six days before the departure of the steamer on which they expect to sail; while emigrants from parts not far distant from this city, like southern Germany and the interior of the Netherlands, arrive at Rotterdam by train and river boat until the day previous to the departure of the steamer.

Here the emigrants remain until the departure of the steamer on which they are to sail or, in case they should be found undesirable immigrants by one of the medical inspectors, by the steamship company, or by the consul-general or vice-consul-general, until the time that they are returned again to the countries whence they came.

The NASM Hotel was designed and built exclusively for the accommodation of the immigrants traveling per Holland-America Line. In the construction, besides the comfort of the emigrants, the sanitary requirements for a building of its kind have been given due consideration. The dining rooms and coffee or conversation rooms are, though necessarily somewhat sober in appearance in order to insure cleanliness, bright, spacious, and pleasant.

The dormitories are spacious, clean, and airy. Sleeping apartments, open on top, each containing from four to six iron berths, similar to those used in the steerage of the company’s twin-screw steamers, have been partitioned off along the walls. This gives the immigrants the desired privacy, besides the advantage of being together with the members of their family in one apartment. Between the partitions a wide space is left in the center of the dormitories for chairs, tables, etc., while windows and ventilators provide light and air on every side. There are separate dormitories for families, for men, and for women. Spacious wash and bath rooms, with modern appointments, are located on the vestibules conveniently close to each dormitory.

The hotel has been constructed in such a manner that, should the need at any time arise, it would be possible to quarantine 800 passengers within its walls as effectually as though they were on shipboard. This possibility of isolation before sailing is a great sanitary advantage.
With reference to this hotel, Consul Listoe wrote in his dispatch to the Department of State, under date of April 6, 1900:

The company’s claim that it is furnishing good lodging and board for emigrants at a low figure and at the same time protecting them against low, boardinghouse runners and sharpers, who would fleece them, is correct, and the Holland America Line is entitled to a great deal of credit for the humane manner in which it treats and cares for its emigrants. What is of more importance, though, from a United States point of view, is the facilities furnished the examining physician at the NASM Hotel for inspecting the emigrants as well as the arrangements for cleaning, bathing, and disinfecting the latter, and taking other sanitary measures in connection with those prospective citizens of the United States.

At the hotel the emigrants are, at the instance of the Holland America Line, daily subjected to a medical inspection by a Dutch physician in the employ of the line. One day before sailing the emigrants are inspected at the hotel by a prominent Rotterdam oculist, engaged by the steamship company for its own protection,’ to prevent emigrants suffering from infectious eye diseases sailing on its steamers. As the medical inspections referred to are not those prescribed by the United States Quarantine Regulations, they are not witnessed by a consular officer.

The work of consular inspection is carried on as follows: The day previous to the departure of a passenger steamer, the baggage of all steerage passengers is inspected by the consul-general or his deputy. Among this baggage large quantities of mildewed and otherwise spoiled eatables are found. These are taken out, this having been the practice of the Marine-Hospital surgeon formerly detailed at Rotterdam.

When there are 200 beds or more to be disinfected, which is frequently the case, supervision of the disinfection will keep a consular officer engaged for several hours. The inspection of the baggage takes from two to four hours, according to the number of packages to be inspected.

The last medical and general inspection of the emigrants at which the consul-general or vice-consul-general is present is the inspection prescribed by the Quarantine Regulations, page I5, paragraph 5. It takes place in the hotel of the Holland-American Line or in the line’s covered warehouse and· begins from three to six hours before the departure of the steamer.

The emigrants pass in single file before the ship’s surgeon, an American physician, who inspects them in the presence of the consular officer, who, for his part, looks over their inspection cards, prescribed by the Quarantine Regulations, page 19, paragraph 40, and stamps the same with a consular rubber seal, for all emigrants approved of.

There are also present an officer of the State commission controlling the transit of emigrants through the Netherlands, who tallies their numbers, and a Rotterdam police officer, who watches for fugitives from justice among them reported to the Netherlands police authorities.

Immediately after the inspection, the emigrants in possession of inspection cards bearing the consular stamp board the steamer and enter the steerage, which has previously been inspected by the consul.

A few minutes before departure, after looking over the freight manifests of the vessel to see if all the requirements of the Quarantine Regulations and of the regulations of the Department of Agriculture have been complied with reference to disinfection certificates and certificates of healthy origin, the bill of health is issued.

The emigrants are vaccinated by the ship’s surgeon as soon as practicable after the departure of the vessel.

Of late years no emigrants from infected districts have passed through Rotterdam on their way to the United States. Should such occur at any time, then they can be effectually quarantined in the hotel of the Holland-America Line for the periods prescribed by the Quarantine Regulations. 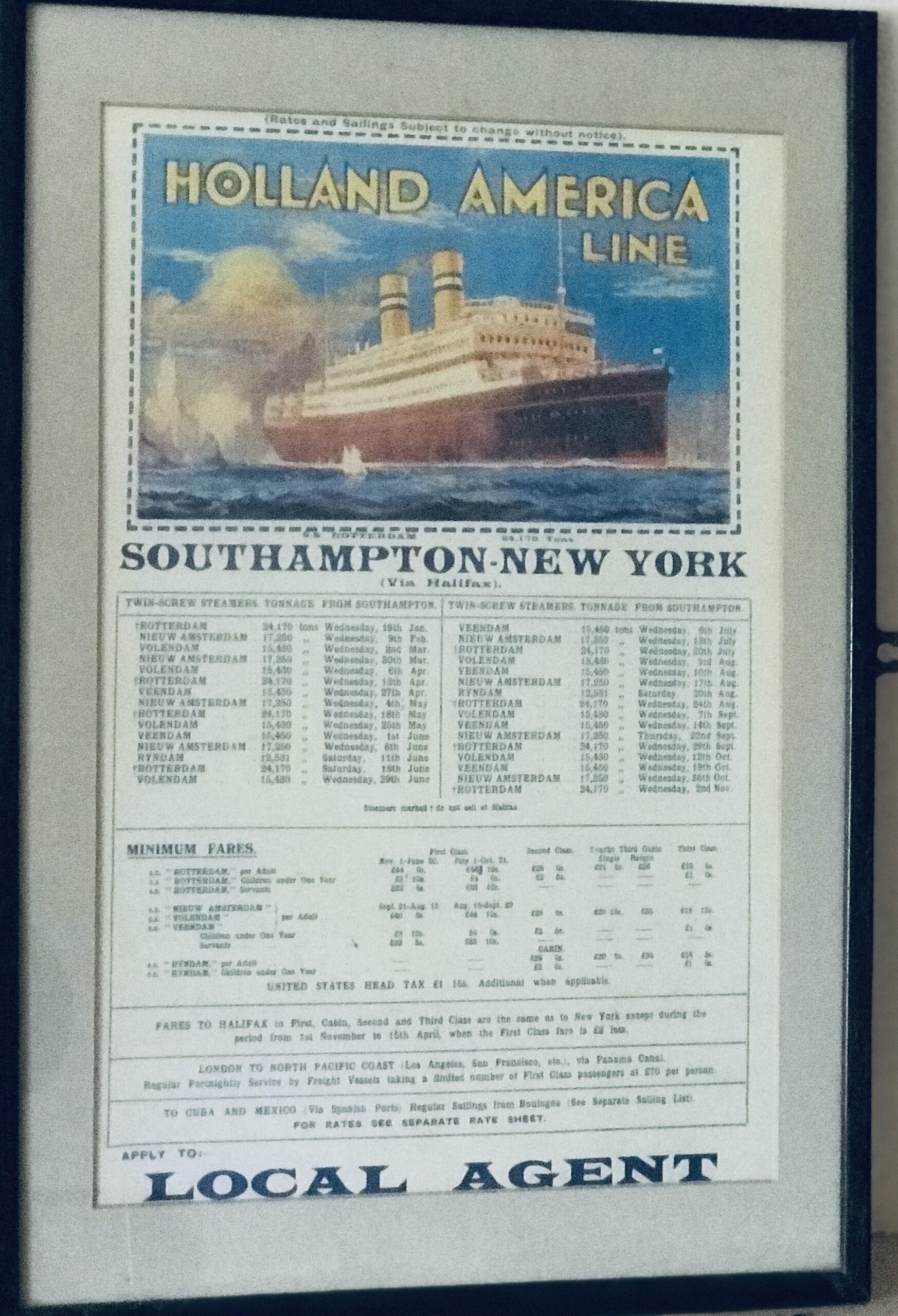 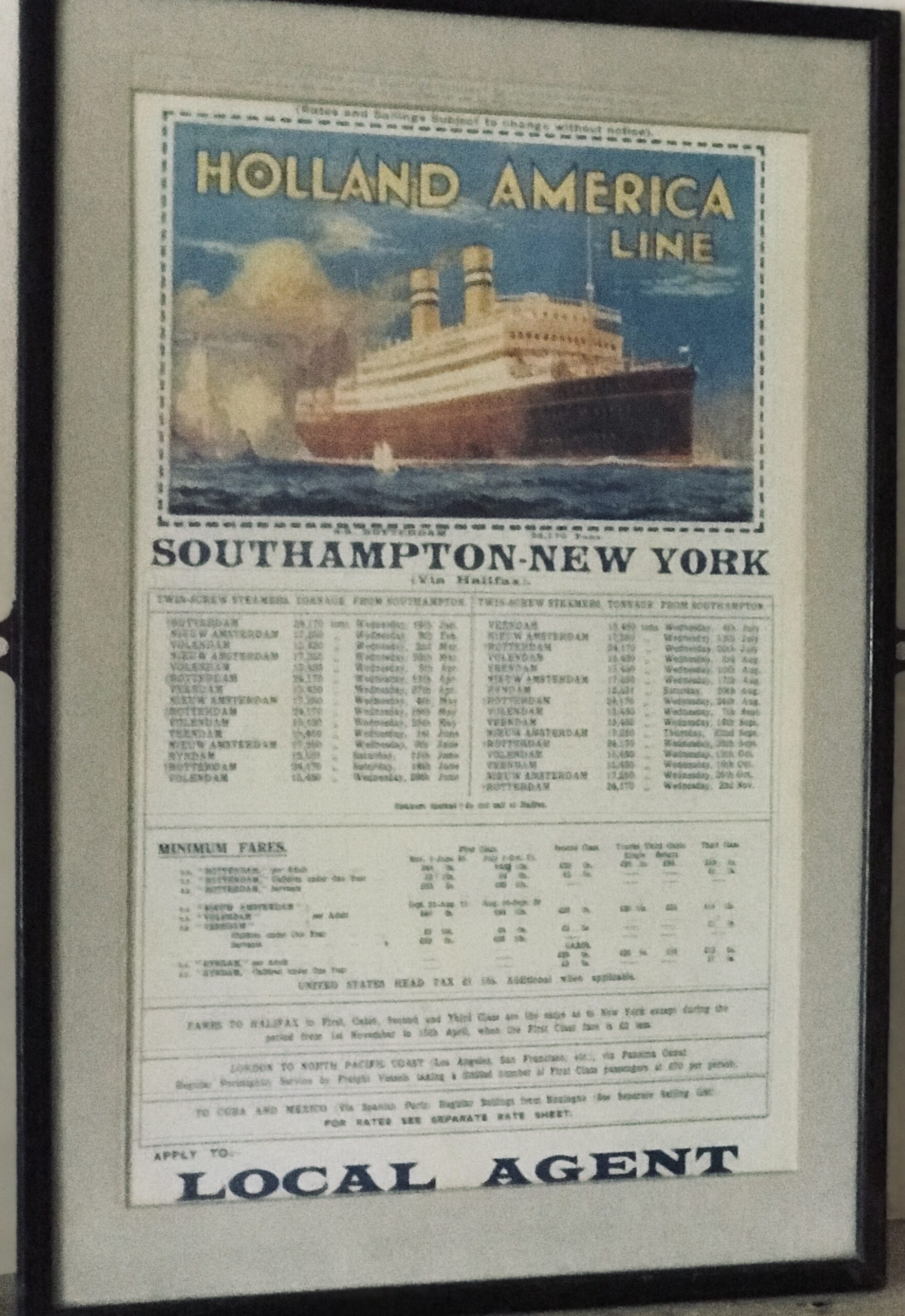 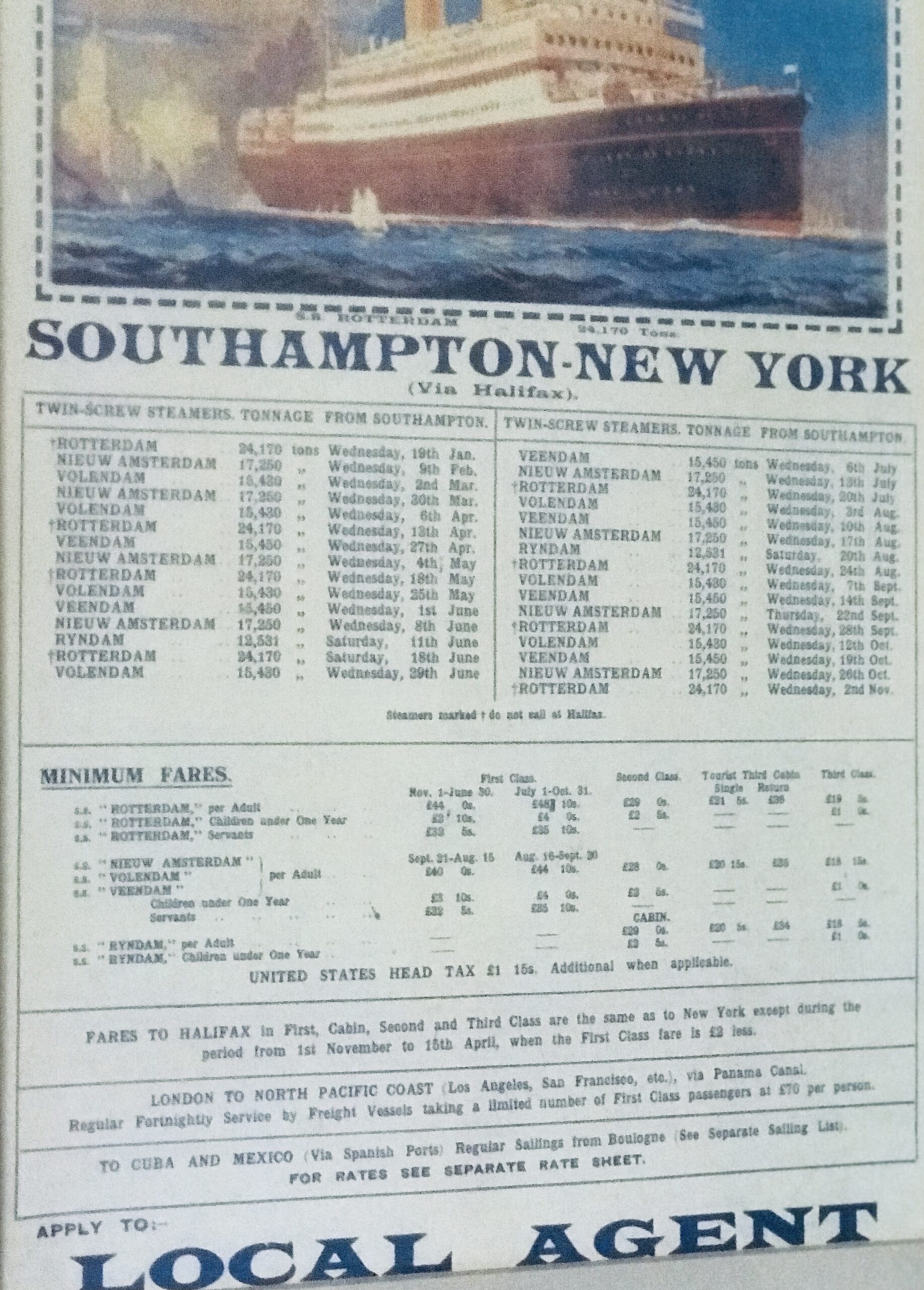 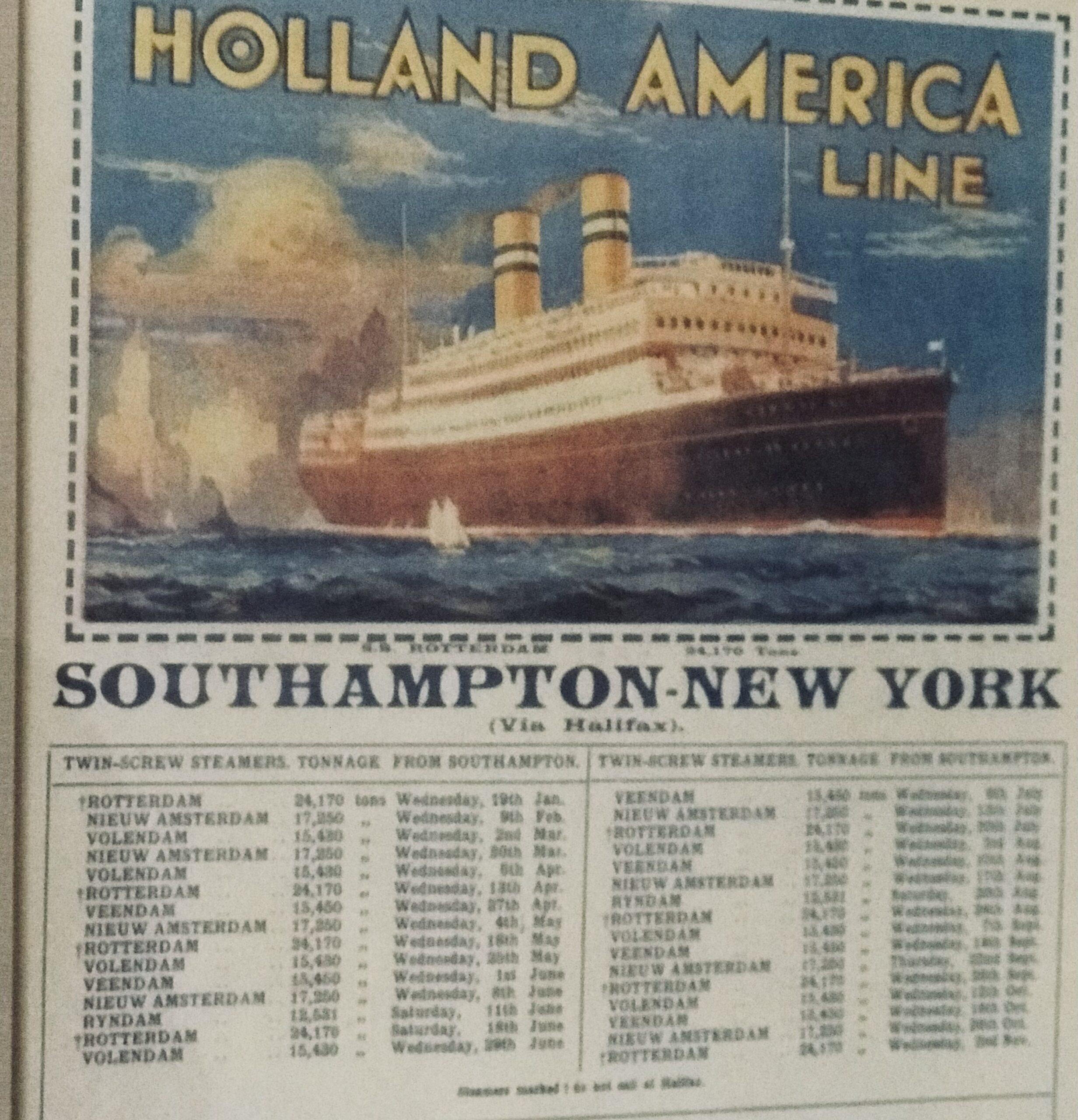