Are you a True Gael or a West Brit Poster

Quite hilarious now (but deadly serious at the time) political cartoon advertising the distinctions between a “True Gael” and a “West Briton”,This was published in An Phoblacht in the 1930s,which was the media arm of Sinn Fein and its chief source of distributing propaganda.

West Brit, an abbreviation of West Briton, is a derogatory term for an Irish person who is perceived as being anglophilic in matters of culture or politics.[1][2][3] West Britain is a description of Ireland emphasising it as under British influence.

“West Britain” was used with reference to the Acts of Union 1800 which united the Kingdom of Great Britain and the Kingdom of Ireland into the United Kingdom of Great Britain and Ireland. Similarly “North Britain” for Scotland used after the 1603 Union of the Crowns and the Acts of Union 1707 connected it to the Kingdom of England (“South Britain“). In 1800 Thomas Grady, a Limerick unionist, published a collection of light verse called The West Briton, while an anti-union cartoon depicted an official offering bribes and proclaiming “God save the King & his Majesty’s subjects of west Britain that is to be!”In 1801 the Latin description of George III on the Great Seal of the Realm was changed from MAGNÆ BRITANNIÆ FRANCIÆ ET HIBERNIÆ REX “King of Great Britain, France and Ireland” to BRITANNIARUM REX “King of the Britains”, dropping the claim to the French throne and describing Great Britain and Ireland as “the Britains”.

Irish unionist MP Thomas Spring Rice (later Lord Monteagle of Brandon) said on 23 April 1834 in the House of Commons in opposing Daniel O’Connell‘s motion for Repeal of the Union, “I should prefer the name of West Britain to that of Ireland”.Rice was derided by Henry Grattan later in the same debate: “He tells us, that he belongs to England, and designates himself as a West Briton.”Daniel O’Connell himself used the phrase at a pro-Repeal speech in Dublin in February 1836:

Here, O’Connell was hoping that Ireland would soon become as prosperous as “North Britain” had become after 1707, but if the Union did not deliver this, then some form of Irish home rule was essential. The Dublin administration as conducted in the 1830s was, by implication, an unsatisfactory halfway house between these two ideals, and as a prosperous “West Britain” was unlikely, home rule was the rational best outcome for Ireland.

“West Briton” next came to prominence in a pejorative sense during the land struggle of the 1880s. D. P. Moran, who founded The Leader in 1900, used the term frequently to describe those who he did not consider sufficiently Irish. It was synonymous with those he described as “Sourfaces”, who had mourned the death of the Queen Victoria in 1901. It included virtually all Church of Ireland Protestants and those Catholics who did not measure up to his definition of “Irish Irelanders”.

In 1907, Canon R. S. Ross-Lewin published a collection of loyal Irish poems under the pseudonym “A County of Clare West Briton”, explaining the epithet in the foreword:

Now, what is the exact definition and up-to-date meaning of that term? The holder of the title may be descended from O’Connors and O’Donelans and ancient Irish Kings. He may have the greatest love for his native land, desirous to learn the Irish language, and under certain conditions to join the Gaelic League. He may be all this, and rejoice in the victory of an Irish horse in the “Grand National“, or an Irish dog at “Waterloo“, or an Irish tug-of-war team of R.I.C. giants at Glasgow or Liverpool, but, if he does not at the same time hate the mere Saxon, and revel in the oft resuscitated pictures of long past periods, and the horrors of the penal laws he is a mere “West Briton”, his Irish blood, his Irish sympathies go for nothing. He misses the chief qualifications to the ranks of the “Irish best”, if he remains an imperialist, and sees no prospect of peace or happiness or return of prosperity in the event of the Union being severed. In this sense, Lord Roberts, Lord Charles Beresford and hundreds of others, of whom all Irishmen ought to be proud, are “West Britons”, and thousands who have done nothing for the empire, under the just laws of which they live, who, perhaps, are mere descendants of Cromwell’s soldiers, and even of Saxon lineage, with very little Celtic blood in their veins, are of the “Irish best”.

According to Boyd, “The West Briton is the near Englishman … an unfriendly caricature, the reductio ad absurdum of the least attractive English characteristics. … The best that can be said … is that the species is slowly becoming extinct. … nationalism has become respectable”. The opposite of the “West Briton” Boyd called the “synthetic Gael”.

After the independence of the Irish Free State, “West British” was applied mainly to anglophile Roman Catholics, the small number of Catholic unionists, as Protestants were expected to be naturally unionists. This was not automatic, since there were, and are, also Anglo-Irish Protestants favouring Irish republicanism (see Protestant Irish nationalism).

“Brit” meaning “British person”, attested in 1884, is pejorative in Irish usage, though used as a value-neutral colloquialism in Great Britain. During the Troubles, among nationalists “the Brits” specifically meant the British Army in Northern Ireland. “West Brit” is today used by Irish people, chiefly within Ireland, to criticise a variety of perceived faults of other Irish people:

Not all people so labelled may actually be characterised by these stereotypical views and habits.

Public perception and self-identity can vary. During his 2011 presidential campaign, Sinn Féin candidate Martin McGuinness criticised what he called West Brit elements of the media, who he said were out to undermine his attempt to win the election. He later said it was an “off-the-cuff remark” but did not define for the electorate what (or who) he had meant by the term.

On the other hand, Irish-born entertainer Terry Wogan, who spent most of his career in Britain working for the BBC, cheerfully described himself as a West Brit:

I’m an effete, urban Irishman. I was an avid radio listener as a boy, but it was the BBC, not RTÉ. I was a West Brit from the start. … I’m a kind of child of the Pale. … I think I was born to succeed here [in the UK]; I have much more freedom than I had in Ireland.

Wogan became a dual citizen of Ireland and the UK, and was eventually knighted by Queen Elizabeth II.

Castle Catholic was applied more specifically by Republicans to middle-class Catholics assimilated into the pro-British establishment, after Dublin Castle, the centre of the British administration. Sometimes the exaggerated pronunciation spelling Cawtholic was used to suggest an accent imitative of British Received Pronunciation.

These identified Catholic unionists whose involvement in the British system was the whole aim of O’Connell’s Emancipation Act of 1829. Having and exercising their new legal rights under the Act, Castle Catholics were then rather illogically being pilloried by other Catholics for exercising them to the full.

The old-fashioned word shoneen (from Irish: Seoinín, diminutive of Seán, thus literally ‘Little John’, and apparently a reference to John Bull) was applied to those who emulated the homes, habits, lifestyle, pastimes, clothes, and zeitgeist of the Protestant Ascendancy. P. W. Joyce‘s English As We Speak It in Ireland defines it as “a gentleman in a small way: a would-be gentleman who puts on superior airs.” A variant since c. 1840, jackeen (‘Little Jack’), was used in the countryside in reference to Dubliners with British sympathies; it is a pun, substituting the nickname Jack for John, as a reference to the Union Jack, the British flag. In the 20th century, jackeen took on the more generalized meaning of “a self-assertive worthless fellow”.

The term is sometimes contrasted with Little Irelander, a derogatory term for an Irish person who is seen as excessively nationalistic, Anglophobic and xenophobic, sometimes also practising a strongly conservative form of Roman Catholicism. This term was popularised by Seán Ó Faoláin.“Little Englander” had been an equivalent term in British politics since about 1859.

An antonym of jackeen, in its modern sense of an urban (and strongly British-influenced) Dubliner, is culchie, referring to a stereotypical Irish person of the countryside (and rarely pro-British). 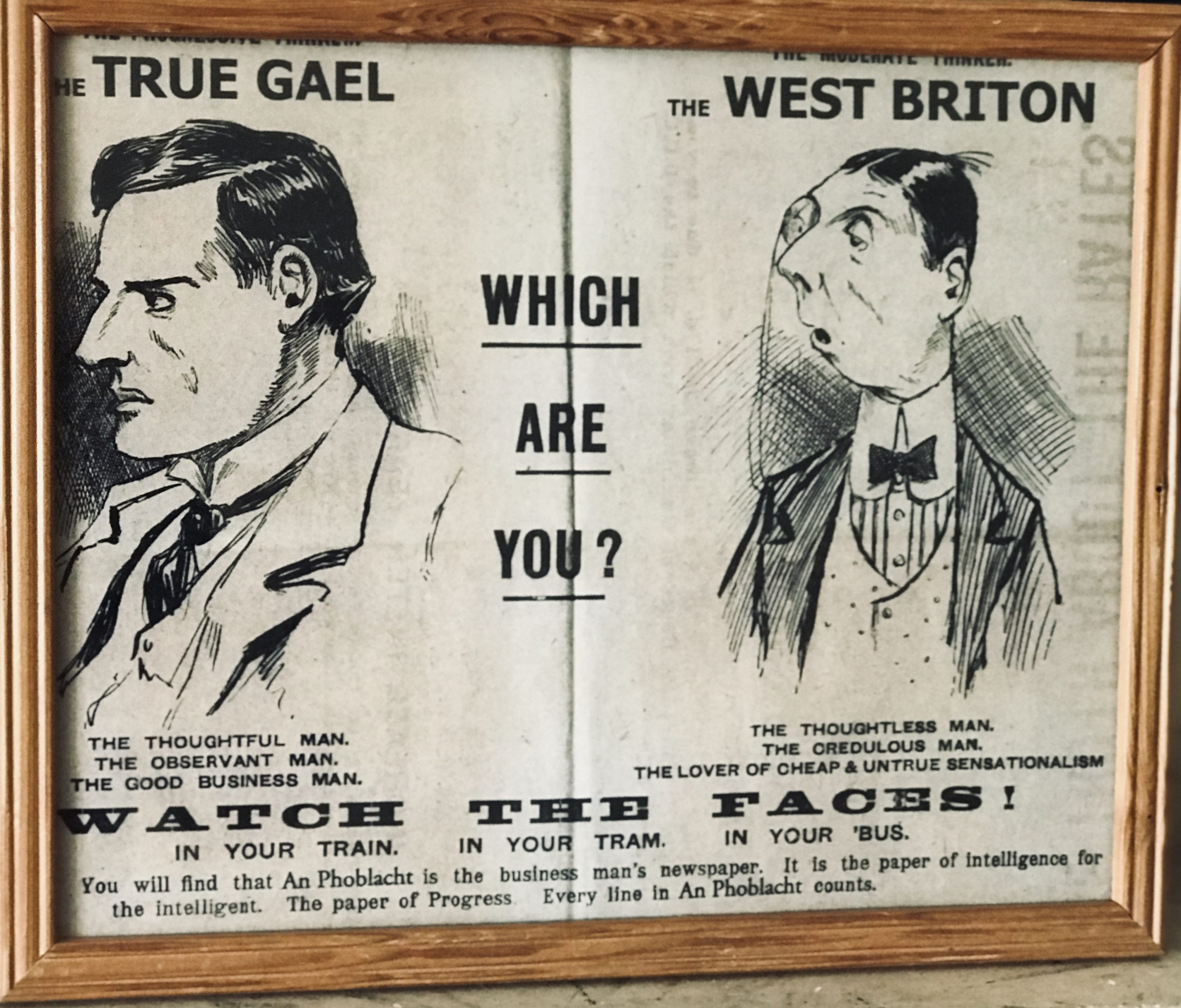 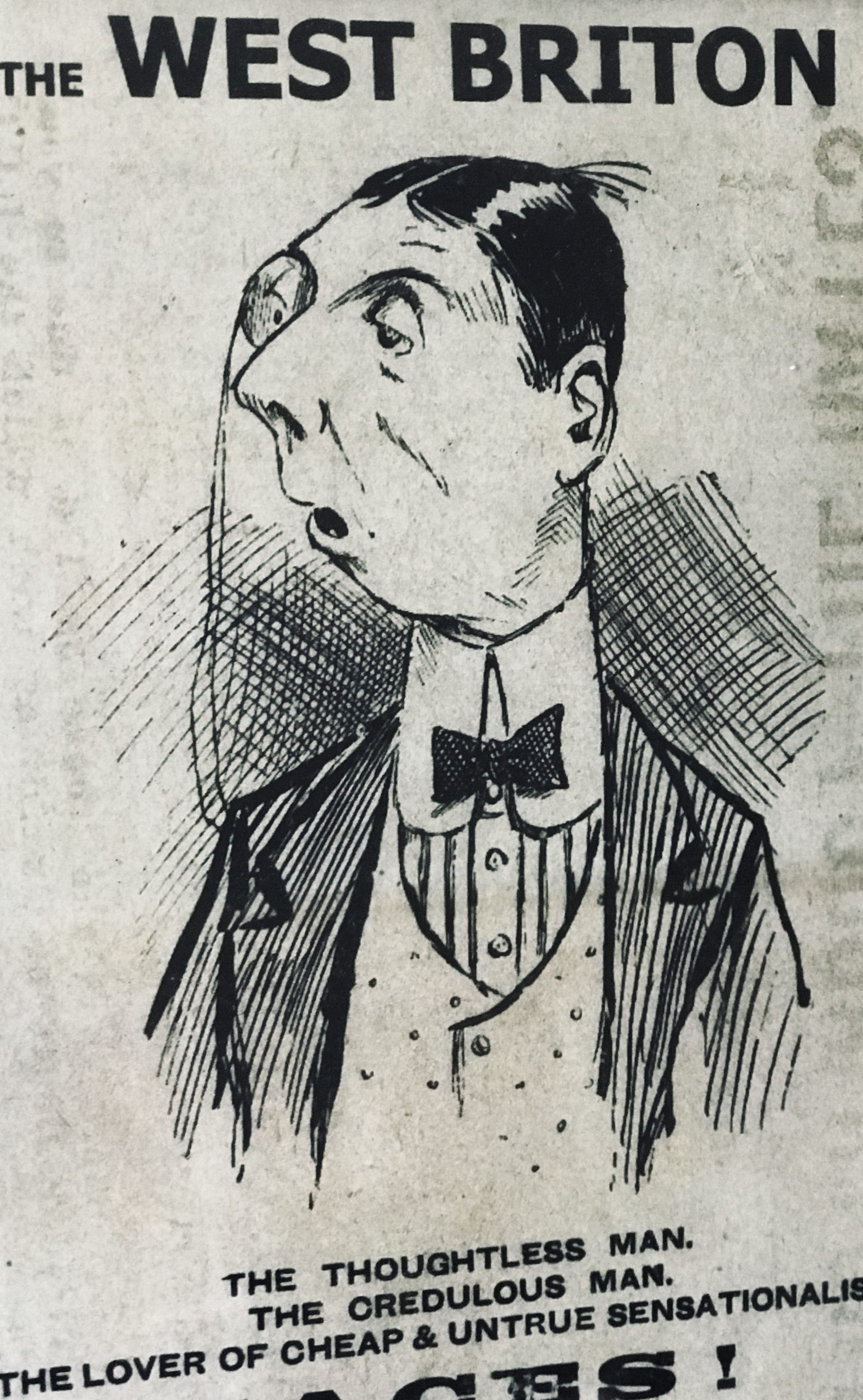 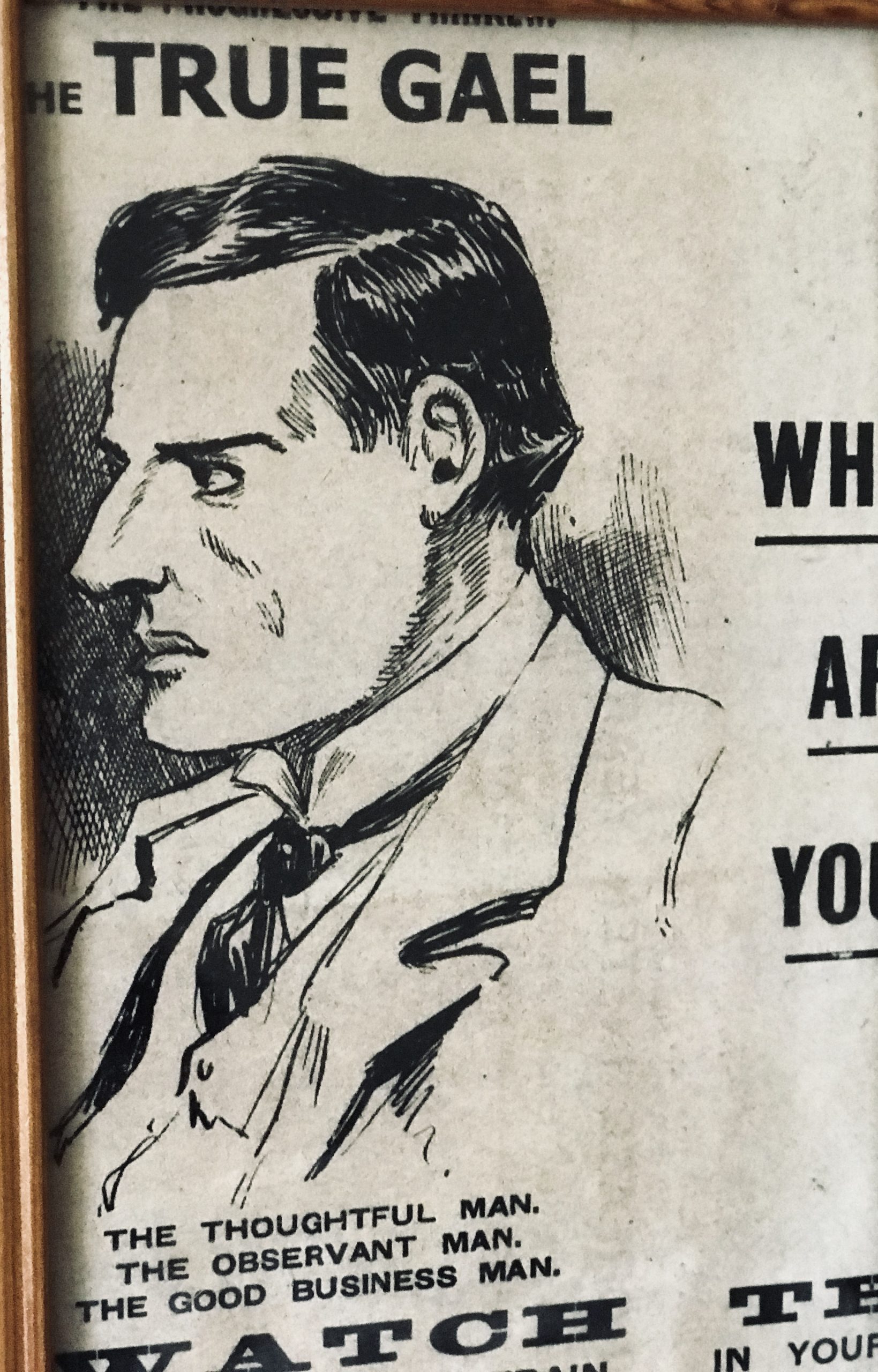