Carling Black Label Beer Retro advert fashioned from the blood, sweat,tears and spillage of a well used Irish Bar Tray & enamel advertising signs.Using high quality reprographics we have brought every scratch,dent and mark back to life in the shape of this unique series of prints.

Even though Carling originated in Canada,it’s popularity spread widely throughout the Commonwealth including Ireland .A famous advertising campaign “I bet he drinks Carling” contributed hugely to the brands market share .

Although its original focus was on ale, Carling has been brewing lager-style beers since the 1870s. In 1927, as part of an overall corporate re-branding effort under new president J. Innes Carling, the company renamed its already popular Black & White Lager to Black Label.

Three years later, Carling was purchased by Toronto business tycoon E. P. Taylor, who merged the company into his Canadian Breweries Limited (CBL), which grew to be the world’s largest brewing company, at least for a time. Under Taylor, Black Label was promoted as CBL’s flagship brand and went on to become the world’s first beer to be brewed on a mass international scale,becoming particularly popular in Commonwealth countries such as the United Kingdom, Australia, New Zealand and South Africa.

In response to a shift in popular taste away from ale, Carling added a three-storey lager plant to their main London, Ontario, brewery in 1877. Carling’s Lager (later renamed Carling’s Bavarian Stock Lager, and then Carling’s Imperial Club Lager) was the company’s first lager brand. Carling’s Black & White Lager was introduced in the 1920s and later renamed Black Label Lager, in contrast to their recently launched Red Cap Ale.

Due to its strength and price, the brand quickly became popular with the country’s working class, perhaps most famously among the loggers and miners of Northern Ontario, where the brand gained a tough, blue-collar image.

Around 1990, Black Label had an advertising campaign in Canada, which used the phrase “The Legend is Black.” 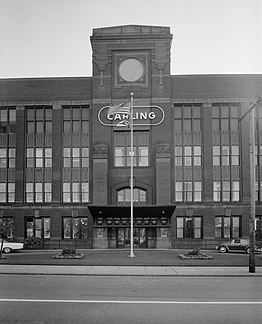 After the repeal of prohibition in 1933, the Peerless Motor Car Company, looking for a way to diversify in the poor car market of the depression, purchased the American rights to Carling’s formulas, identifying labels, and trademarks. Technicians and brewmasters were sent from Canada to convert a Peerless plant in Cleveland, Ohio, into the Brewing Corporation of America. They first tried just brewing Carling’s Red Cap Ale, but sales were too slow to maintain the brewery, and sales didn’t climb until the introduction of Black Label lager. The philosophy behind Black Label was to have a high quality lager that was available nationwide but with a locally brewed budget price. The strategy worked, and the next several decades led to rapid growth and expansion for the brewery and the Carling Black Label brand.

When Carling stopped producing Black Label to focus on a more profitable lager, they found their sales plummeting. Carling re-introduced Black Label with a beautiful blonde named Mabel, portrayed by Jeanne Goodspeed, with the slogan “Hey Mabel, Black Label!”. The twenty-year marketing campaign cemented the name in the popular culture of America.

In 1979, after several years of intense pressure from the larger American Brewers Miller and Anheuser-Busch, Carling-National was bought out by the Heileman Brewing Co. of La Crosse, Wisconsin. Carling and the Black Label brand are currently owned by the Molson Coors Brewing Company. Though no longer widely distributed in the U.S., Black Label remains the official beer of Beer Frisbee.

Black Label was introduced to the United Kingdom in 1952. Originally, it was only available in bottles, but in 1965, The Hill Top in Sheffield became the first pub to pour Carling Black Label draughts.

A pint of Carling in a pub in Kettering, England

In the 1970s and 80s, Carling Black Label sales were driven to great heights, due partly to increased advertising support, in particular the classic “I bet he drinks” series of advertisements, and partly with the launch of Carling Black Label in cans. Cans were important to Carling’s success as they helped open up the “take home” market.[3]

The “I bet he drinks” series of ads showed someone doing something cool, clever or difficult, and having a bystander say “I bet he drinks Carling Black Label”. With the help of this advertising campaign, it became Britain’s best-selling brand of beer in 1971. In the 1980s, many of the adverts featured comedians Mark Arden and Stephen Frost, also known as The Oblivion Boys, delivering the classic punchline. One of the advertisements in the series, Dambusters from 1989, was a parody of the 1955 film of the same name, and was ranked at number 12 on ITV‘s list of the “Best Ever Ads” in 2005, and at number 17 on Channel 4‘s list of the “100 Greatest TV Ads” in 2000.Campaign Live also ranked it at number 5 in their list of the “Top 10 Funniest TV Ads of All Time” in 2008.

Carling has remained Britain’s best selling beer since 1985. ‘Black Label’ has been dropped from the brand name and logo in Britain since 1997.

In South Africa, Black Label began to take on a different tone with the anti-apartheid movement. This was partly due to the fact that, at 5.5%, it had more alcohol than the other brands of beer that generally had 5.0%, as noted in the popular advertising catch phrase “only hard working students deserve an extra 0.5 percent.”

Furthermore, the connotation of black to the racial issue became a point of pride to the native Africans. It used to be sold with the motto, “America’s Lusty, Lively Beer”, perhaps in reference to Canada, though it is seldom seen in the United States. The motto came from an older advertising campaign in the United States. Another famous Afrikaans slogan for Black Label in South Africa is, “Black Label sê die bybel“, which means “The Bible says (one should drink) Black Label.” 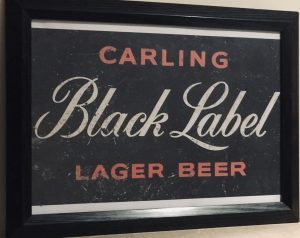 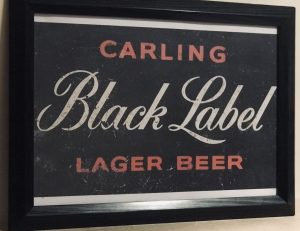