Stephen Collins (born 21 July 1964) is an Irish former professional boxer who competed from 1986 to 1997. Known as the Celtic Warrior, Collins is the most successful Irish boxer in recent professional boxing history, having held the WBOmiddleweight and super-middleweight titles simultaneously and never losing a fight as champion.

It was not until Collins reached his early 30s that he fulfilled his potential, becoming WBO middleweight champion in his third world title attempt with a fifth-round TKO victory over Chris Pyatt in 1994, before then moving up in weight to defeat the undefeated Chris Eubank and claim the WBO super-middleweight title in 1995. More success followed, as Collins successfully defended his title by winning the rematch against Eubank later in the year. Collins successfully defended his title another six times before pulling out of a proposed fight in October 1997 against rising Welsh star, Joe Calzaghe, and retiring from the sport, with Collins frustrated by his inability to get a fight against the pound for pound number one boxer of the time, Roy Jones Jr., who was then fighting in the light-heavyweight division.

Having competed against some of the best boxers on both sides of the Atlantic during his career, Collins tends to be linked more to an era in the UK during which there was a notable rivalry between British boxers Chris Eubank and Nigel Benn, both of whom Collins fought and defeated twice.

Steve Collins won 26 Irish titles as an amateur before turning professional in Massachusetts, US in October 1986. Collins worked out of the Petronelli Brothers gym in Brockton, Massachusetts alongside Marvin Hagler. His debut fight was against Julio Mercado on the undercard of a bill that featured Irish Americans; his future trainer Freddie Roach and the future Fight of the Year winner Micky Ward. Collins beat Mercado by way of knockout in the third round.

In Boston, Massachusetts in 1988, he defeated former Olympian and British Super Middleweight champion Sam Storey to win the Irish middleweight title, then defeated world No. 5, Kevin Watts to win the USBA middleweight title. After reaching 16–0, Collins stepped in as a substitute in a WBA middleweight title fight after Michael Watson was injured in training, and fought 12 rounds against Mike McCallum in Boston in 1990. Collins was supported by a large crowd of Irish Americans as he battled the champion McCallum, with the fight being close early on before McCallum started to tire as Collins gained momentum in the later stages to bring a close finish at the end of 12 exciting rounds. McCallum got the win by unanimous decision.

In 1992, Collins lost a majority decision to Reggie Johnson in a closely contested slugfest for the vacant WBA middleweight title (which had been stripped from McCallum because he signed to fight IBF champion James Toney). Collins then lost by split decision to Sumbu Kalambay for the European title in Italy, before beating Gerhard Botes of South Africa to win the WBA Penta-Continental middleweight title in 1993.

Collins then moved to Belfast under the management of Barney Eastwood before basing himself in England where he joined Barry Hearn‘s Matchroom Boxing. Alongside him was Paul “Silky” Jones, his sparring partner and good friend who later went on to become WBO light-middleweight title holder. Collins was trained by Freddie King in the Romford training camp.

In May 1994, Collins finally won a world title by defeating Chris Pyatt by stoppage in five rounds to become the WBO middleweight champion. Early in 1995, Collins relinquished this title without a defence as he was having difficulty making the 160lbs middleweight limit.

In March 1995, Chris Eubank (41-0-2) had been scheduled to have a third WBO super-middleweight title fight against Ray Close. Eubank and Close had two fights over the previous two years (their first fight a draw, and their second fight a narrow split decision win for Eubank), but Close was forced to withdraw from their scheduled third fight after failing an MRI brain scan. Collins then stepped into Close’s place, moving up to super-middleweight to take on Eubank.

Collins defeated the then unbeaten long-reigning champion Chris Eubank in Millstreet, County Cork, Ireland, in March 1995, by unanimous decision (115–111, 116–114, 114–113), to win the WBO super-middleweight title. Collins had enlisted the help of a guru, and they led the press to believe that Collins would be hypnotised for the fight, which noticeably unsettled Eubank. True to form, Collins sat in his corner and did not move, listening to headphones during Eubank’s ring entrance. Collins knocked Eubank down in the eighth round, and was well ahead on the scorecards at the end of Round 9, but Eubank finished the fight strongly as he tried to save his unbeaten record and knocked Collins down in the tenth round, coming close to a stoppage. Eubank was unable to finish the job, and Collins held on for victory.

In their September 1995 rematch in Cork, Collins performed brilliantly, changing his usual fighting style by adopting wild, brawling tactics throughout which Eubank really struggled to deal with. Despite most TV pundits and commentators giving Collins a wide points victory with scorecards in the region of 117–111 and 118–110, the three judges saw the fight very differently with Collins only winning by a close split decision, 115–113, 115–113 and 114–115. Collins successfully defended his WBO super-middleweight title seven times, including two fights against Nigel Benn in 1996.

In the summer of 1997, Collins reportedly stated in the press that he had no motivation left, as he had spent the best part of his career chasing Roy Jones Jr. for a fight that had been promised to him many times. Collins is reported to have stated in Boxing World that he had spent so long chasing Roy Jones Jr. that money was no longer important; that he would “fight him in a phone box in front of two men and a dog”. but the bout never materialised. A WBO super-middleweight title fight against Joe Calzaghe was agreed for October 1997, but Collins got injured 10 days before the scheduled fight, got stripped of his title by the WBO, with Collins then making a statement saying that fighting Calzaghe would do nothing to satisfy the desire he had for fighting Jones. Collins then added he wanted to retire on a high note with a good pay day, “Joe is a good up-and-coming kid, but he wouldn’t fill a parish church”. As Collins couldn’t get the fight with Jones, Collins decided to retire.

In 1999, Collins announced his decision to come out of retirement to fight Roy Jones Jr. Controversy surrounded the proposed fight, as WBC and WBA light heavyweight champion Jones decided to fight the IBF light heavyweight champion and old Collins foe Reggie Johnson (which Jones won by a shutout 120–106 on all three judges’ scorecards), and it was revealed that Collins would have to fight Calzaghe before a showdown with Jones. Collins had accepted this and started to prepare to fight Calzaghe. In training, Collins collapsed during a sparring session with Howard Eastman. Although tests and a brain scan could not find any problems, Collins decided that it was a warning to make him stop boxing, and he retired for a second time.

Collins has not entirely faded from the spotlight since his retirement. In 1998 he appeared in the film Lock, Stock and Two Smoking Barrels as a boxing gym bouncer. In 1999 he made a cameo appearance in “Sweetest Thing“, a music video by U2. On 15 January 2013, at the age of 48, Collins announced plans to fight Roy Jones Jr.He went on to appear in a number of exhibition bouts in preparation for the proposed Jones fight.

In 2017 Collins joined the Army Reserve‘s 253 Provost Company of the 4th Regiment Royal Military Police in London where he had been living for the previous 20 years. He gained promotion to Lance Corporal and qualified as an army boxing coach.

His brother Roddy Collins is a former professional footballer and manager. 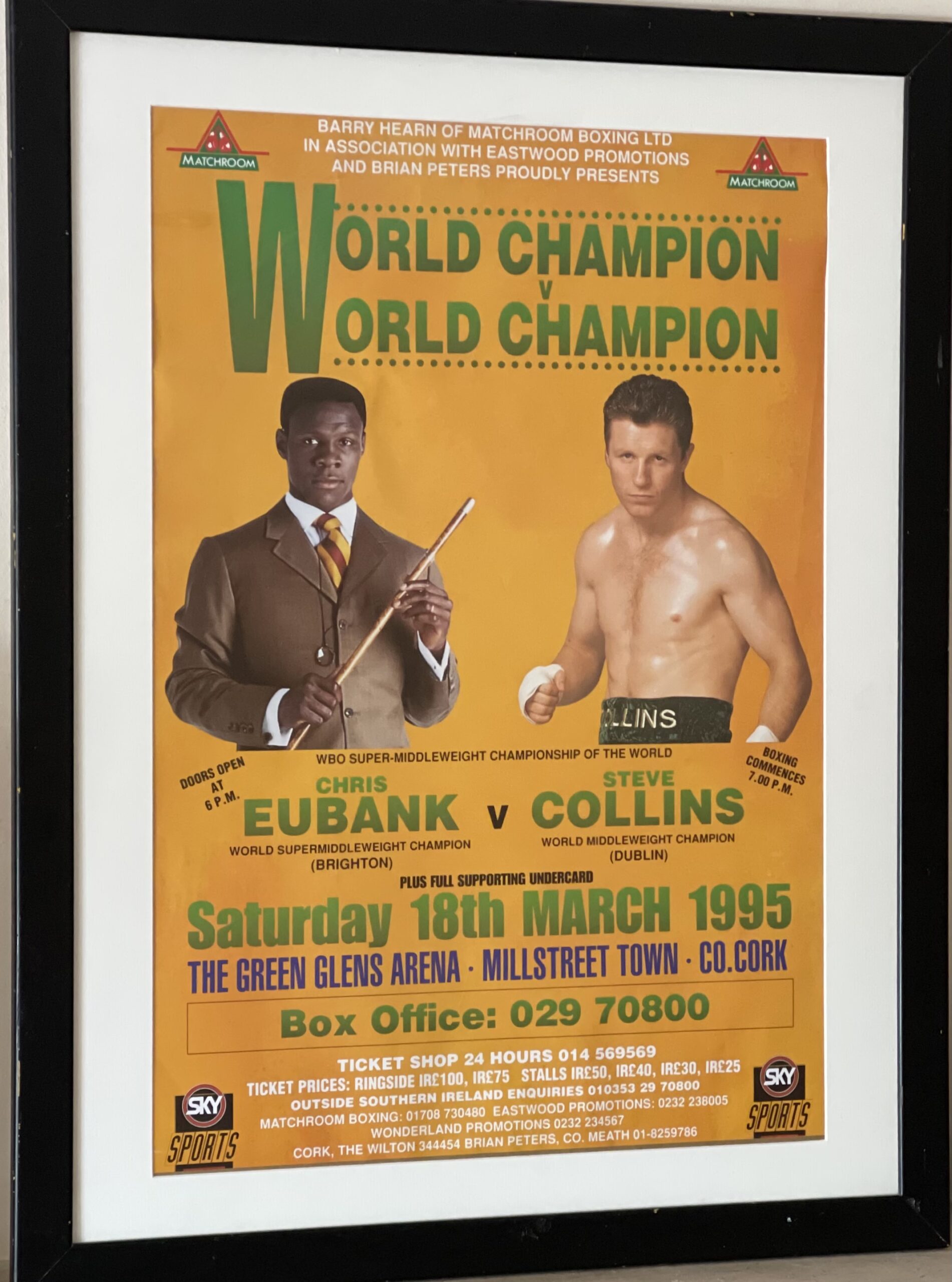 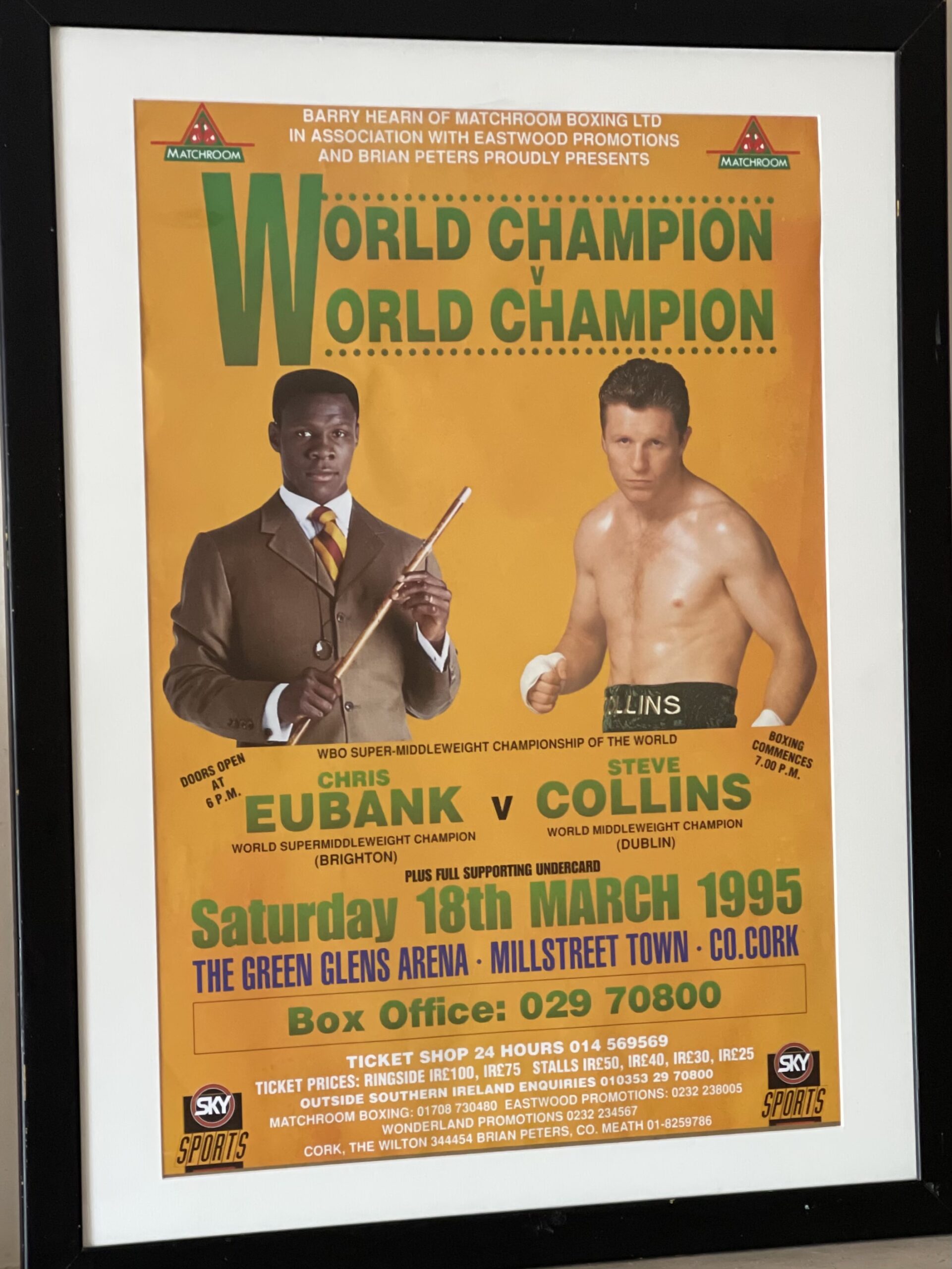 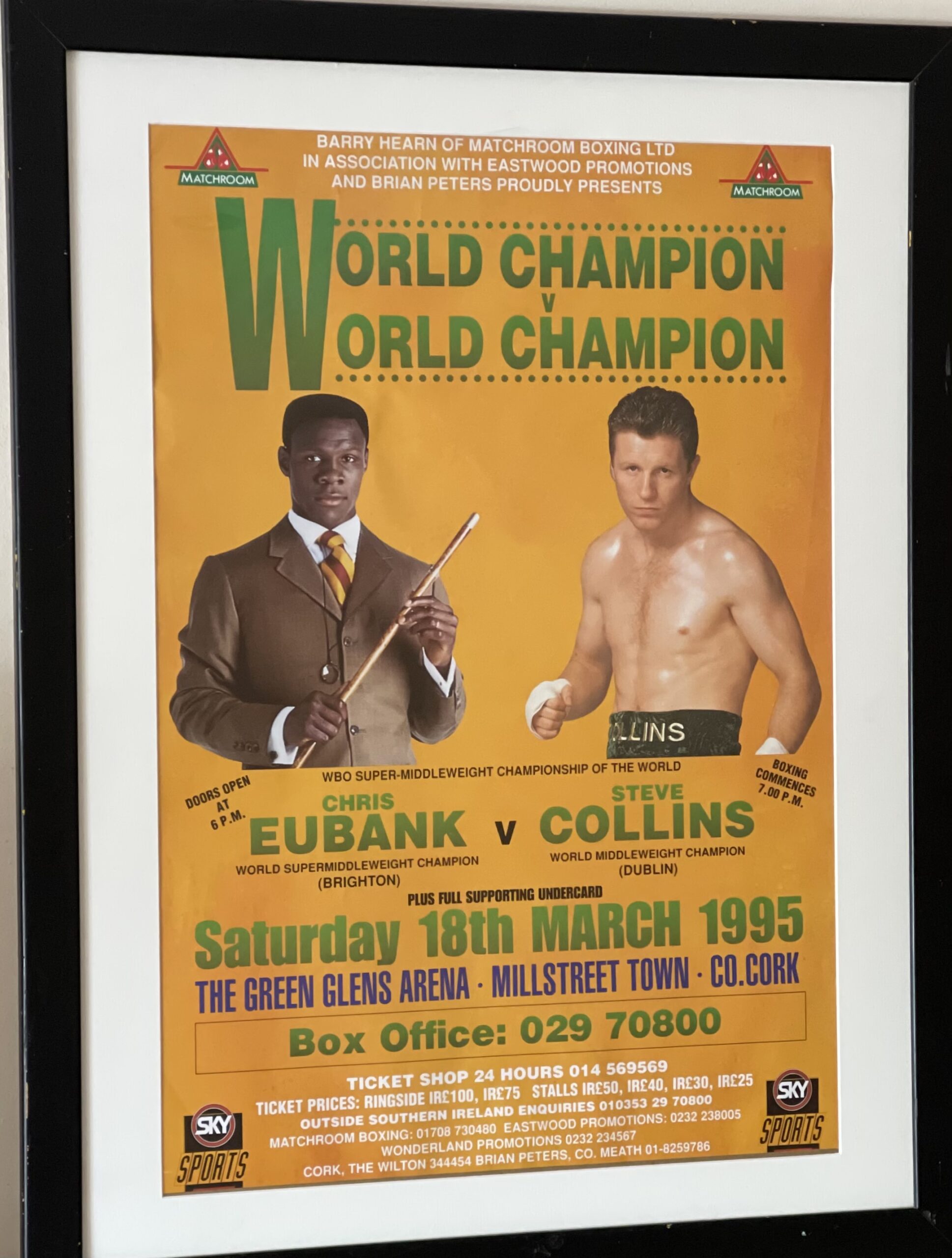 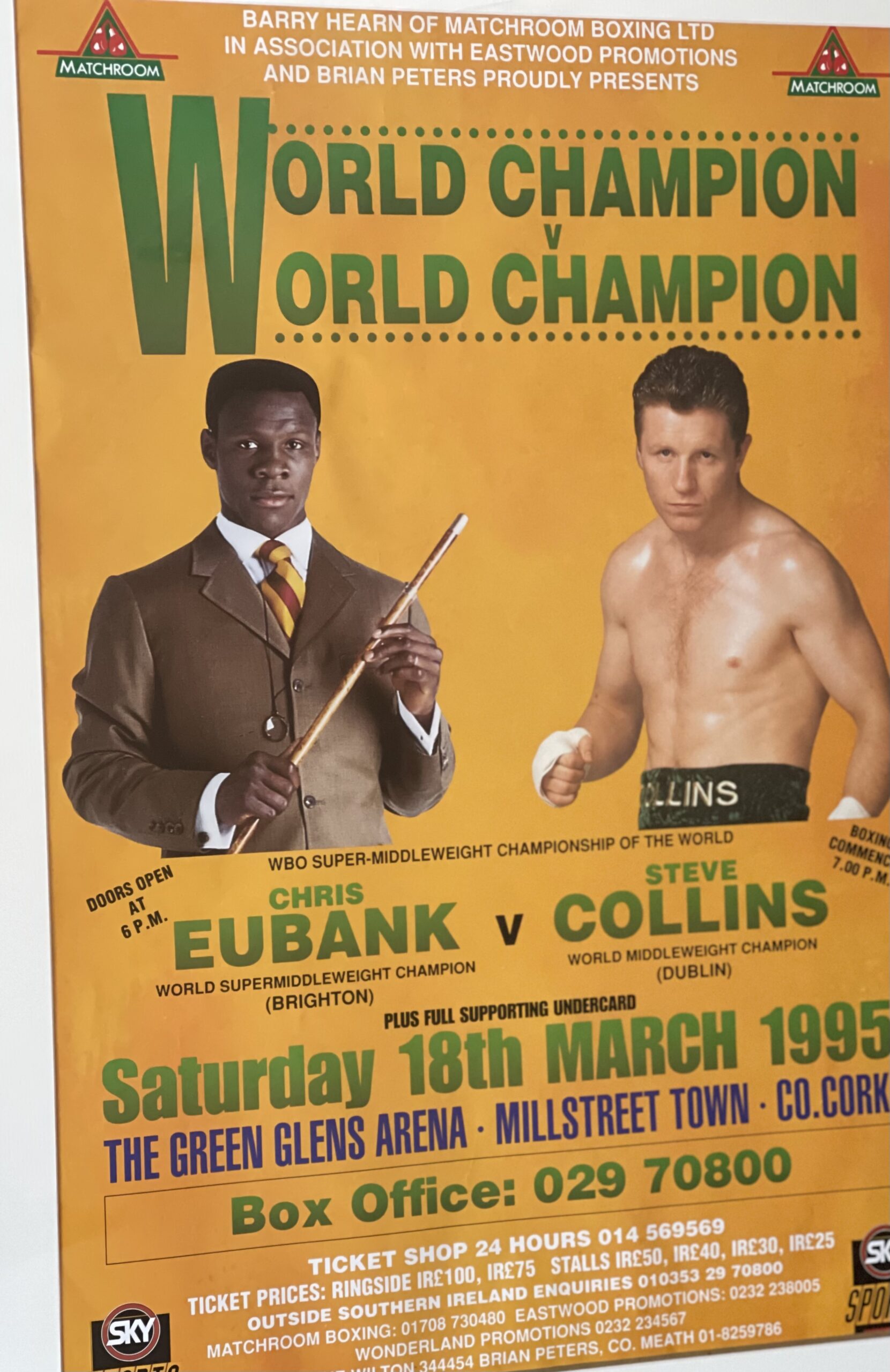 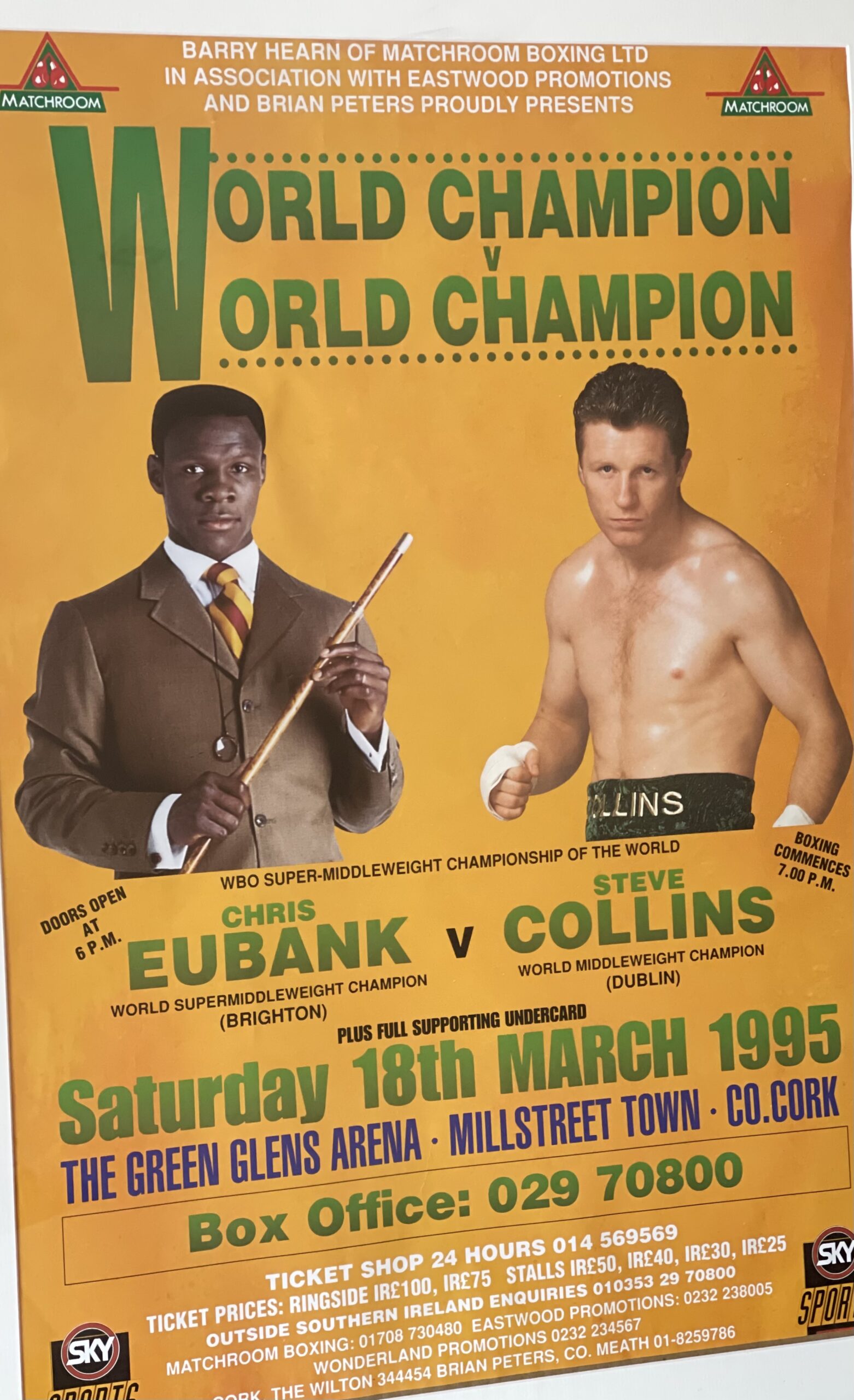 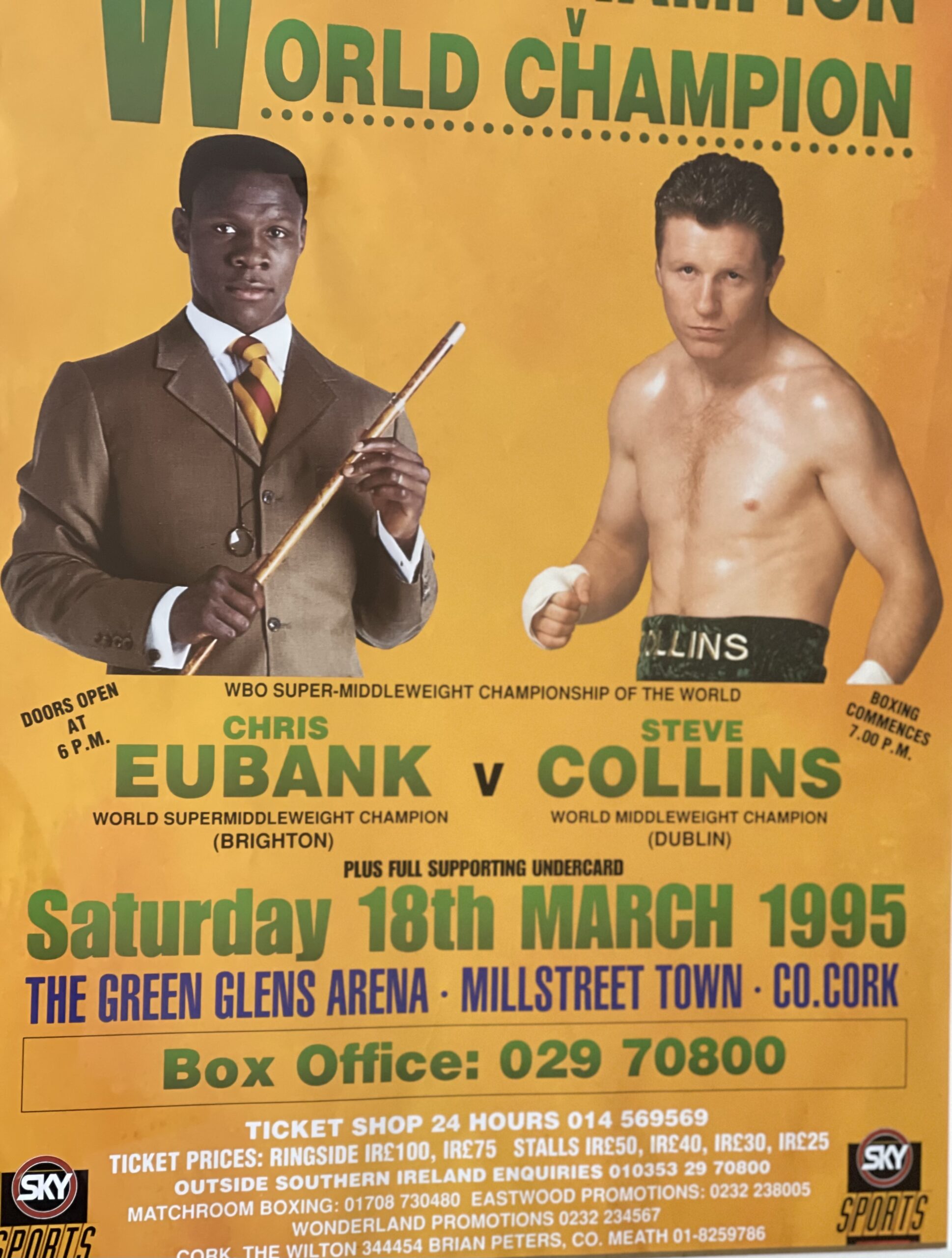