And given that The Bohemian is situated on Doyle’s Corner it seems an apt subject. Doyle’s Corner has an interesting history of which this particular pub is a part of. Back around the turn of the century, the intersection of The North Circular and The Phibsborough Road was known as Dunphy’s Corner. Now, this is where it starts to get a bit confusing because the word Doyle is about to be bandied about as much as it might do in a series or two of Father Ted.

The name Dunphy’s Corner was derived from another public house which sits directly across the road from The Bohemian – now named Doyle’s Corner, formerly named Doyle’s. The pub that provided this named was owned by a man named Thomas Dunphy who presided over it from the mid-1800s up to around the 1890s. The name Dunphy’s Corner must have been widely used by Dubliners because it’s well represented in song, literature and lore. It gets a mention in Peadar Kearney’s anti-enlistment Ballad about the recruiting sergeant William Bailey (Lankum do a great version), who is said to have stood on the corner in the process of his enlisting. And Peadar might have been working on a subliminal as well as a perceptible level here because ‘going round Dunphy’s Corner‘, as it would have been put, was seemingly an idiom used to describe those who had gone to the great beyond, given its nodal point on the route taken by hearses on their way to Glasnevin. Those familiar with the first half of Ulysses, might remember that Poor Dignam went the very same way along that route in the earlier stages of the book.

So in the mid-1890s or so along came John Doyle. And John Doyle fancied he might usurp Dunphy and in setting about doing this, he acquired both number 160 and number 66 Phibsborough Road and placed within each of them a public house which bore his name. It was a trick the evidently worked because, as I’m sure you will know, the corner is still referred to as Doyle’s. Seemingly someone by the name of Murphy – proprietor of the nearby Botanic House – took ownership of The Bohemian in the 1970s and figured he could usurp Doyle by erecting signs which read ‘Murphy’s Corner’. But the inhabitants of Phibsborough and Dubliners alike never took to it. So it remains – Doyle’s Corner.

Next to a statue or the freedom of the city, perhaps the most select honour you can earn in Dublin is to have a street corner named after you in perpetuity. It’s a very rare distinction, available mainly – it seems – to publicans, whose premises command an important junction for a substantial period. It’s also entirely in the public’s gift, not officialdom’s. And the vast majority of city corners are never so named. I can think of fewer than 10 that have been, including Doyle’s, Hanlon’s, Hart’s, Kelly’s, and Leonard’s. Some of those names have long outlived the original businesses, although that said, “perpetuity” may be overstating their lease, as the case of Doyle’s illustrates.

Anyone who was at the annual Bloomsday re-enactment in Glasnevin last Sunday will have been reminded that Doyle’s Corner, in nearby Phibsboro, used to be “Dunphy’s”. As such, it was mentioned in Ulysses for its prominent role in city funerals, including the fictional Paddy Dignam’s, as the last right-angle turn towards the cemetery.

Hence, as Leopold Bloom’s interior voice records: “Dunphy’s corner. Mourning coaches drawn up drowning their grief. A pause by the wayside. Tiptop position for a pub. Expect we’ll pull up here on the way back to drink his health. Pass around the consolation. Elixir of life.”

It also inspires a joke by one of the other passengers in the carriage: “First round Dunphy’s, Mr Dedalus said, nodding. Gordon Bennett Cup.”

His reference to the famous motor race may have been a nod to the haste with which some corteges used to move in those years, under pressure from the cemetery’s restrictive opening hours. In a series of newspaper essays, The Streets of Dublin 1910-11, the then Alderman Thomas Kelly complained he had never seen in any other Irish city “the galloping which, more especially on Sunday’s, disgraces Dublin funerals”.

That same alderman – a future Sinn Féin TD – was the Kelly for whom Kelly’s Corner is named, an honour all the more unusual because he owned a shop rather than a pub. But for apparent immortality in those years, his corner would have had to bow to Dunphy’s, which enjoyed a whole different level of fame.  As he also writes, “Rounding Dunphy’s Corner” had become a popular Dublin euphemism for life’s last journey.

Even in 1904, however, Dunphy’s pub had already made way for one called Doyle’s, and the corner name gradually followed. There must have been a period when it was known as both, because the news archives for 1906 have a story about a collapse of scaffolding at “Doyle’s Corner”, during rebuilding of the premises there. Among five people injured, incidentally, was “a man named Coleman, from Exchange Street”, who had also survived the sewer gas tragedy in a manhole on Burgh Quay the year previous (to which there remains today a monument). Talk about luck.

No doubt even the indestructible Coleman rounded Dunphy’s Corner eventually. In any case, by the 1920s, the Phibsboro Junction was firmly established as Doyle’s Corner, and is still known as that, its latter-day notoriety secured by regular mentions on AA Roadwatch. Nobody calls it Dunphy’s Corner anymore.

Mind you, the same location proves that mere changes of ownership do not in themselves confer naming privileges. For a time in the middle of the last century, I gather, there was also a Murphy’s pub on the site, the owner of which erected a sign proclaiming “Murphy’s Corner”. The public did not take the hint. 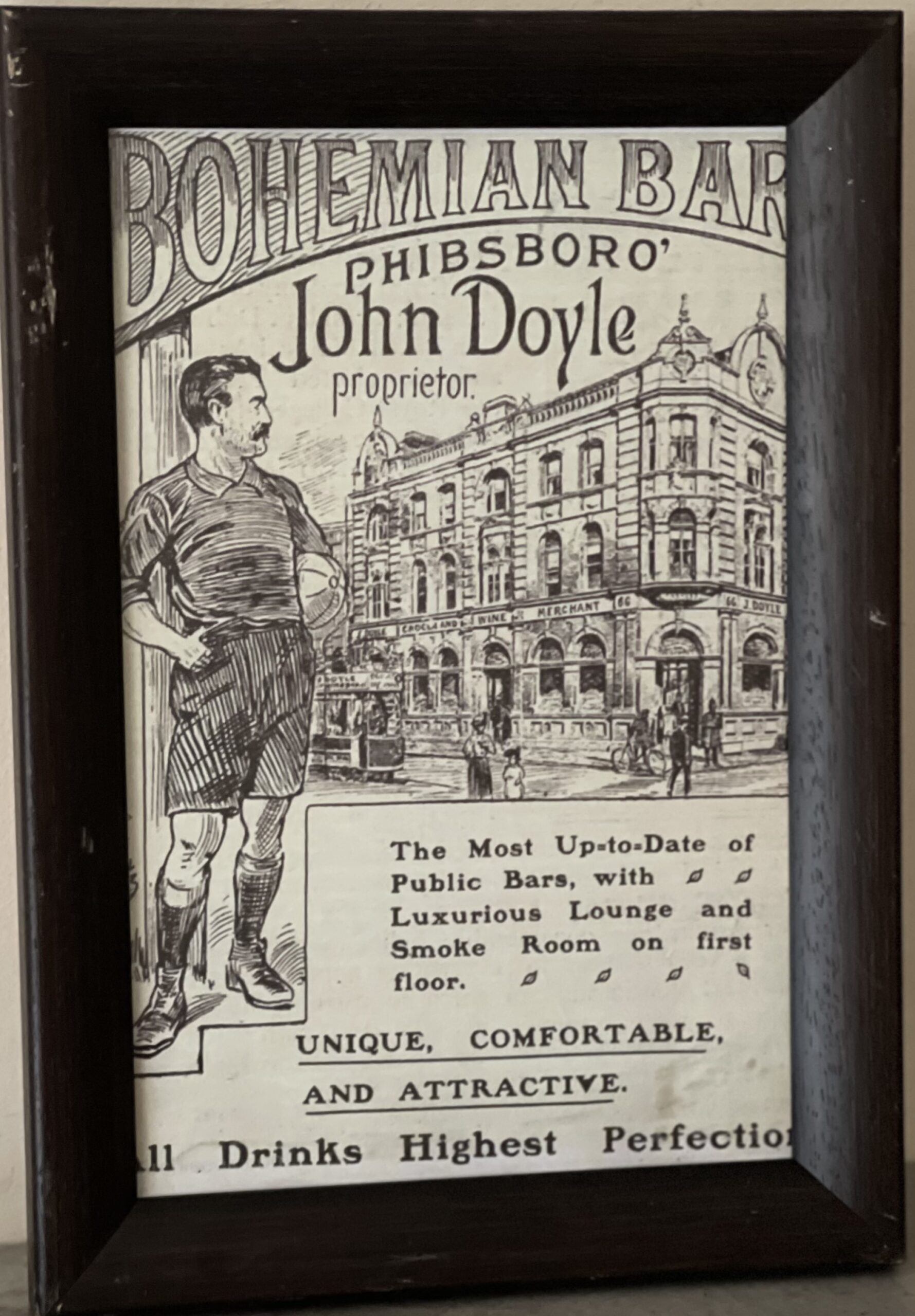 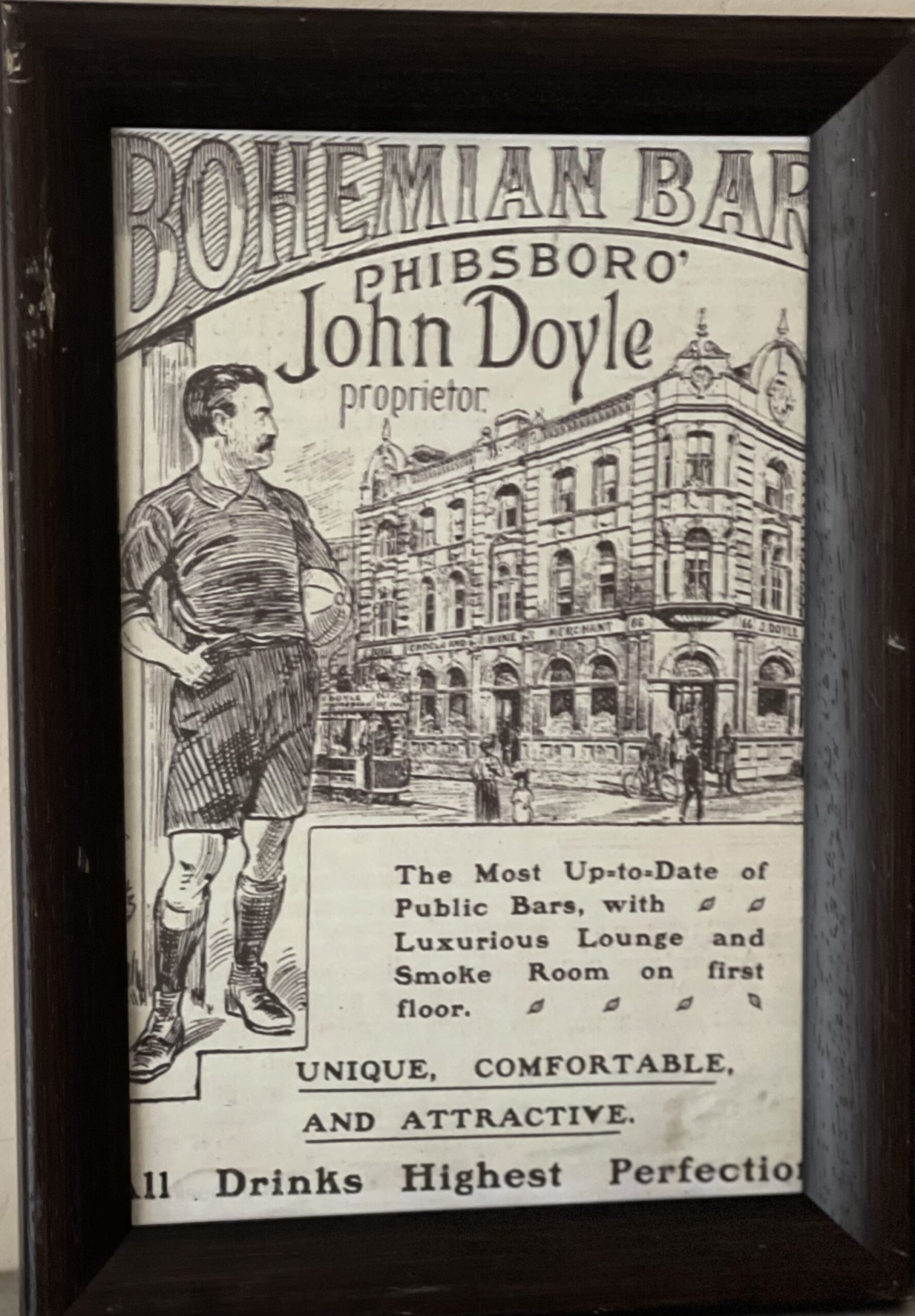 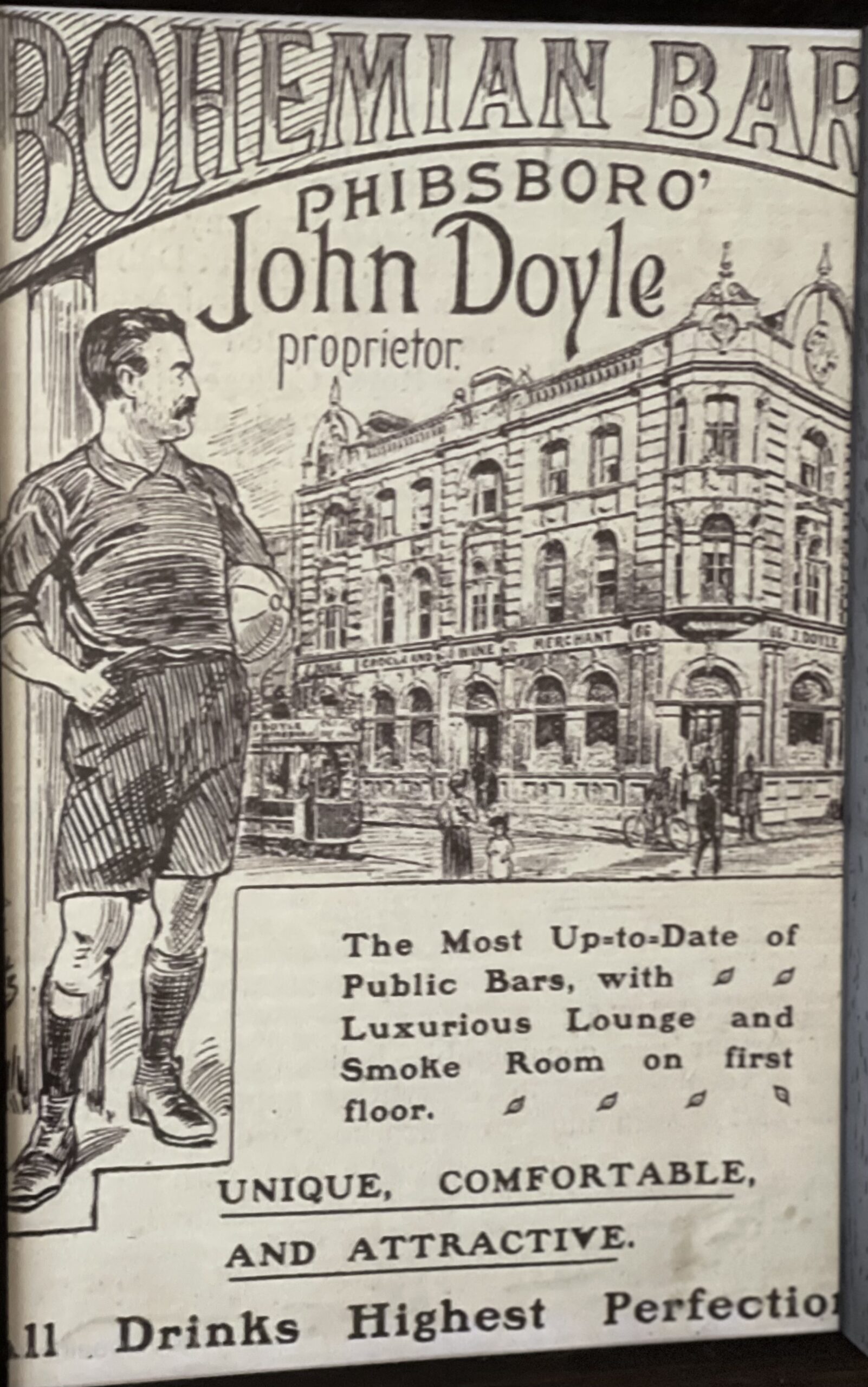 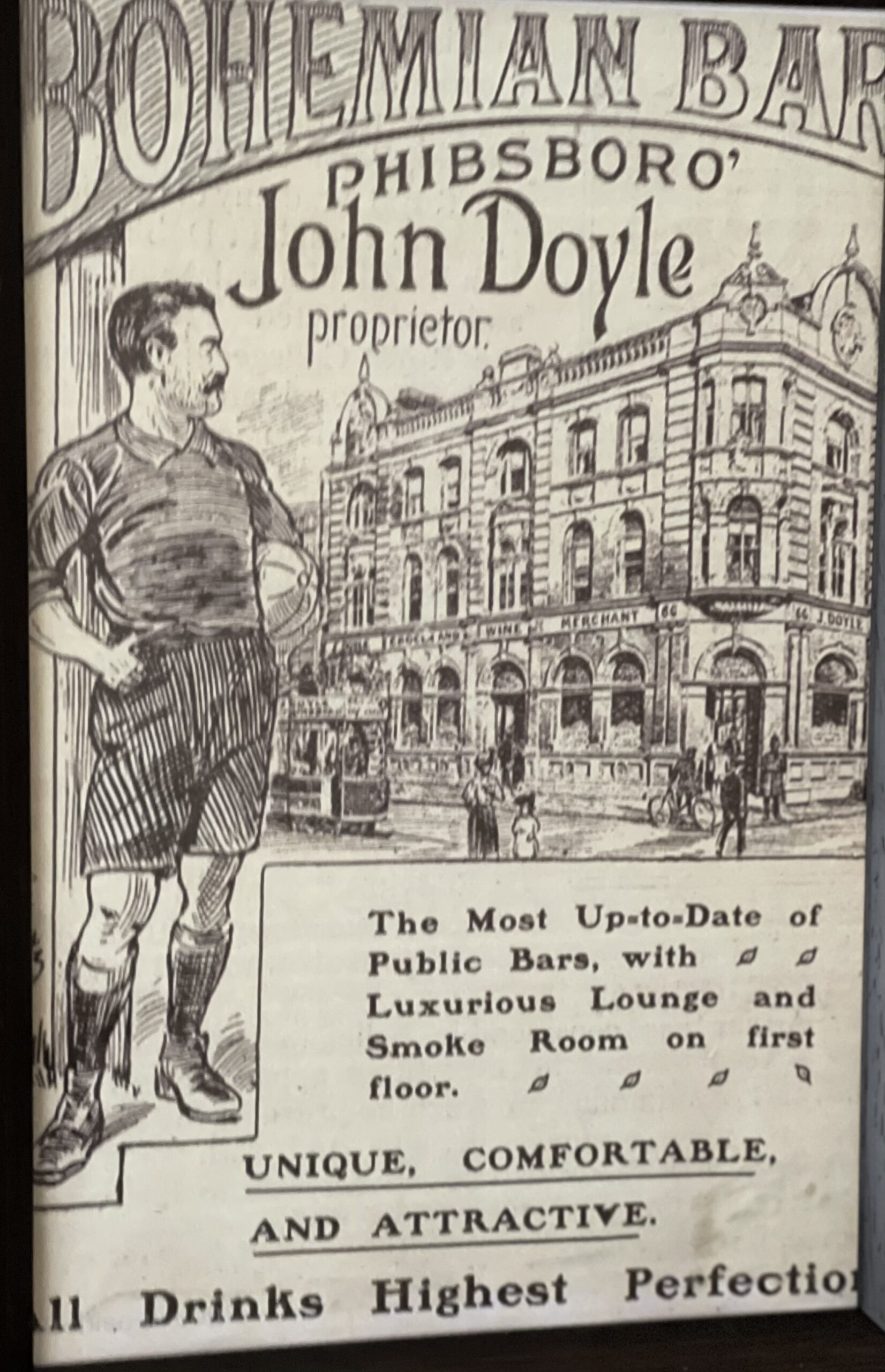