The Proclamation of the Republic (Irish: Forógra na Poblachta), also known as the 1916 Proclamation or the Easter Proclamation, was a document issued by the Irish Volunteers and the Irish Citizen Army during the Easter Rising in Ireland, which began on 24 April 1916. In it, the Military Council of the Irish Republican Brotherhood, styling itself the ’Provisional Government of the Irish Republic’, proclaimed Ireland’s independence from the United Kingdom. The reading of the proclamation by Patrick Pearse outside the General Post Office (GPO) on Sackville Street (now called O’Connell Street), Dublin’s main thoroughfare, marked the beginning of the Rising. The proclamation was modelled on a similar independence proclamation issued during the 1803 rebellion by Robert Emmet.

Principles of the proclamation

Though the Rising failed in military terms, the principles of the Proclamation to varying degrees influenced the thinking of later generations of Irish politicians. The document consisted of a number of assertions:

The printing and distribution of the text

The proclamation had been printed secretly prior to the Rising on a Summit Wharfedale Stop Cylinder Press, located in Liberty Hall, Eden Quay (HQ of the Irish Citizen Army). Because of its secret printing, problems arose which affected the layout and design. In particular, because of a shortage of type, the document was printed in two halves, printing first the top, then the bottom on the same piece of paper. The typesetters were Willie O’Brien, Michael Molloy and Christopher Brady.They lacked a sufficient supply of type in the same size and font, and as a result, some parts of the document use es from a different font, which are smaller and do not quite match.

The language suggested that the original copy of the proclamation had actually been signed by the Rising’s leaders. However no evidence has ever been found, nor do any contemporary records mention, the existence of an actually signed copy, though had such a copy existed, it could easily have been destroyed in the aftermath of the Rising by someone (in the British military, a member of the public or a Rising participant trying to destroy potentially incriminating evidence) who did not appreciate its historic importance. Molloy claimed in later life to have set the document from a handwritten copy, with signatures on a separate piece of paper which he destroyed by chewing while in prison, but this was disputed by other participants. Molloy also recalled that Connolly had asked for the document to resemble an auctioneer’s notice in general design.

There are about 30 original copies still remaining, one of which can be viewed in the National Print Museum.Reproductions were later made, which have sometimes been misattributed as originals.When the British soldiers recaptured Liberty Hall, they found the press with the type of the bottom of the proclamation still fully set up, and reportedly ran off some copies as souvenirs, leading to a proliferation of these ‘half-copies’.James Mosley notes that complete originals rapidly became rare in the chaos, and that over a month later the Dublin police had failed to find one for their files.

The signatories (as their names appeared on the Proclamation):

One question sometimes raised is why the first name among the ‘signatories’ was not Pearse but Tom Clarke, a veteran republican. Had the arrangement of names been alphabetical, Éamonn Ceannt would have appeared on top. Clarke’s widow maintained that it was because the plan had been for Clarke, as a famed veteran, to become the President of the Provisional Republic. Such an explanation would certainly explain his premier position. However, others associated with the Rising dismissed her claims, which she made in her memoirs. Later documents issued by the rebels gave Pearse pride of place, though as ‘Commanding in Chief the Forces of the Irish Republic, and President of the Provisional Government,not ‘President of the Republic’. Whether the plan had ever been to have Clarke as a symbolic head of state and Pearse as head of government or was simply that Pearse was always to be central but with statements ambiguously describing his title, remains a mystery about which historians still speculate.

All seven signatories of the proclamation were executed by the British military (James Connolly who had been wounded in the fighting was executed sitting down in a chair) in the aftermath of the Rising, being viewed as having committed treason in wartime (i.e. the First World War). British political leaders regarded the executions initially as unwise, later as a catastrophe, with the British Prime Minister H. H. Asquith and later prime minister David Lloyd George stating that they regretted allowing the British military to treat the matter as a matter of military law in wartime, rather than insisting that the leaders were treated under civilian criminal law. Though initially deeply unsympathetic to the Rising (the leading Irish nationalist newspaper, the Irish Independent called for their execution), Irish public opinion switched and became more sympathetic due to the manner of their treatment and executions.Eventually Asquith’s government ordered a halt to the executions and insisted that those not already executed be dealt with through civilian, not military, law. By that stage, all the signatories and a number of others had been executed.

Full copies of the Easter Proclamation are now treated as a revered Irish national icon, and a copy was sold at auction for €390,000 in December 2004.A copy owned (and later signed as a memento) by Rising participant Seán T. O’Kelly was presented by him to the Irish parliament buildings, Leinster House, during his tenure as President of Ireland. It is currently on permanent display in the main foyer. Other copies are on display in the GPO (headquarters of the Rising and the place where the Proclamation was first read), the National Museum of Ireland, the Trinity College Library‘s Long Room and other museums worldwide. Facsimile copies are sold as souvenirs in Ireland, and copies of the text are often displayed in Irish schools and in Irish pubs throughout the world. The proclamation is read aloud by an Officer of the Irish Defence Forces outside the GPO during the Easter Rising commemorations on Easter Sunday of each year.

IRISHMEN AND IRISHWOMEN:
In the name of God and of the dead generations from which she receives her old tradition of nationhood, Ireland, through us, summons her children to her flag and strikes for her freedom.

Having organised and trained her manhood through her secret revolutionary organisation, the Irish Republican Brotherhood, and through her open military organisations, the Irish Volunteers and the Irish Citizen Army, having patiently perfected her discipline, having resolutely waited for the right moment to reveal itself, she now seizes that moment and supported by her exiled children in America and by gallant allies in Europe, but relying in the first on her own strength, she strikes in full confidence of victory.

We declare the right of the people of Ireland to the ownership of Ireland and to the unfettered control of Irish destinies, to be sovereign and indefeasible. The long usurpation of that right by a foreign people and government has not extinguished the right, nor can it ever be extinguished except by the destruction of the Irish people. In every generation the Irish people have asserted their right to national freedom and sovereignty; six times during the past three hundred years they have asserted it in arms. Standing on that fundamental right and again asserting it in arms in the face of the world, we hereby proclaim the Irish Republic as a Sovereign Independent State, and we pledge our lives and the lives of our comrades in arms to the cause of its freedom, of its welfare, and of its exaltation among the nations.

The Irish Republic is entitled to, and hereby claims, the allegiance of every Irishman and Irishwoman. The Republic guarantees religious and civil liberty, equal rights and equal opportunities to all its citizens, and declares its resolve to pursue the happiness and prosperity of the whole nation and of all its parts, cherishing all the children of the nation equally, and oblivious of the differences carefully fostered by an alien Government, which have divided a minority from the majority in the past.

Until our arms have brought the opportune moment for the establishment of a permanent National Government, representative of the whole people of Ireland and elected by the suffrages of all her men and women, the Provisional Government, hereby constituted, will administer the civil and military affairs of the Republic in trust for the people.

We place the cause of the Irish Republic under the protection of the Most High God, Whose blessing we invoke upon our arms, and we pray that no one who serves that cause will dishonour it by cowardice, inhumanity, or rapine. In this supreme hour the Irish nation must, by its valour and discipline, and by the readiness of its children to sacrifice themselves for the common good, prove itself worthy of the august destiny to which it is called.

Signed on behalf of the Provisional Government: 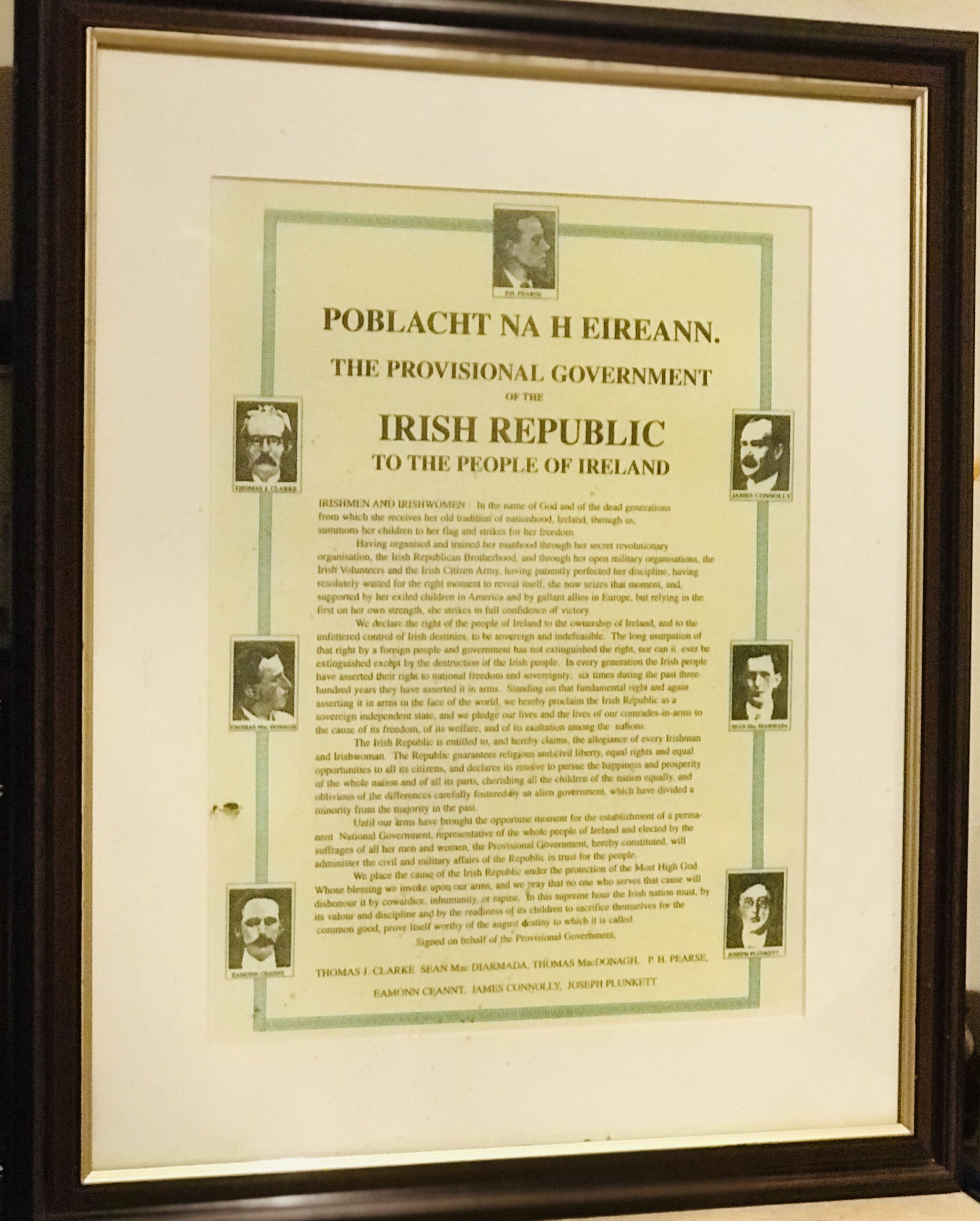 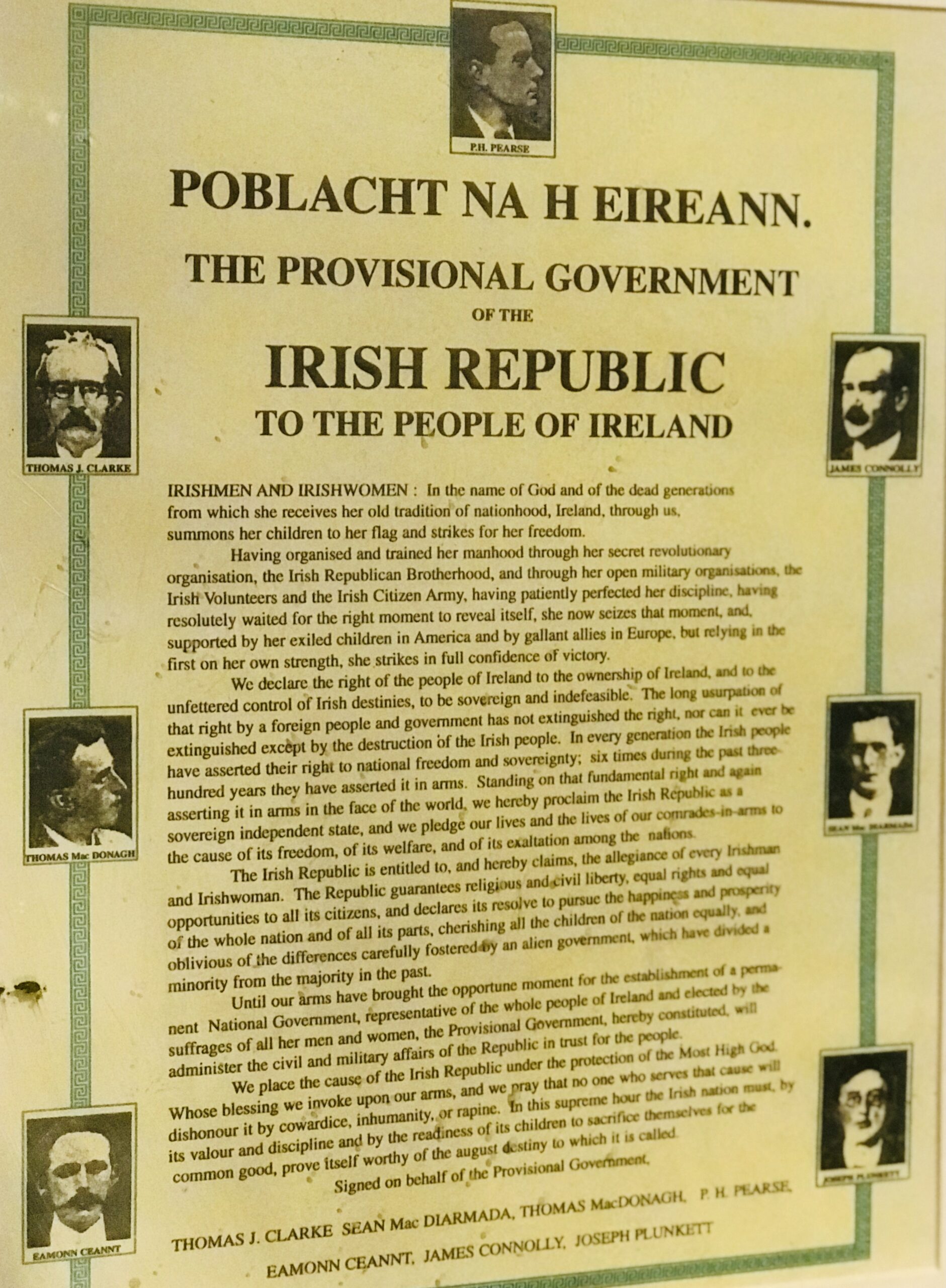 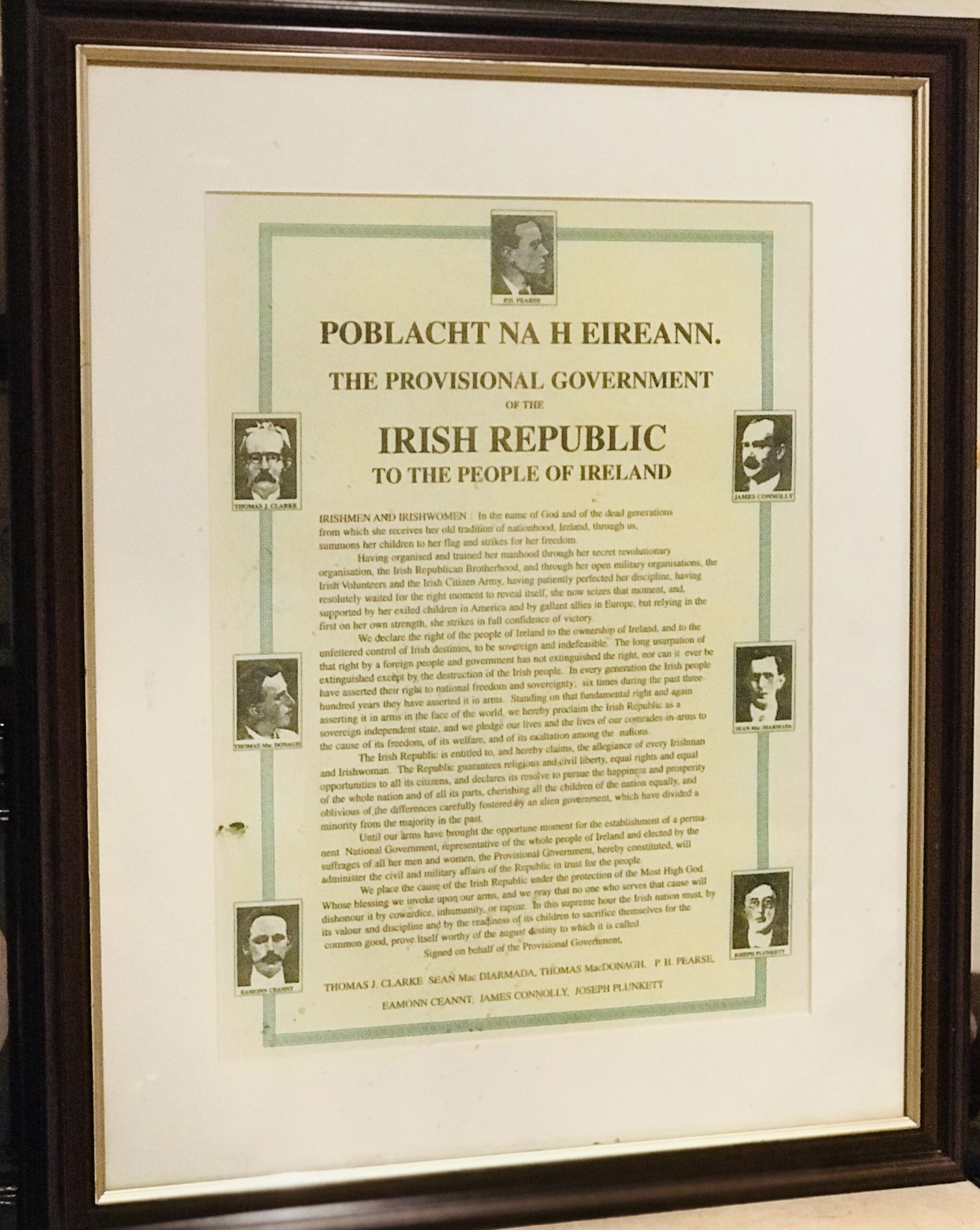 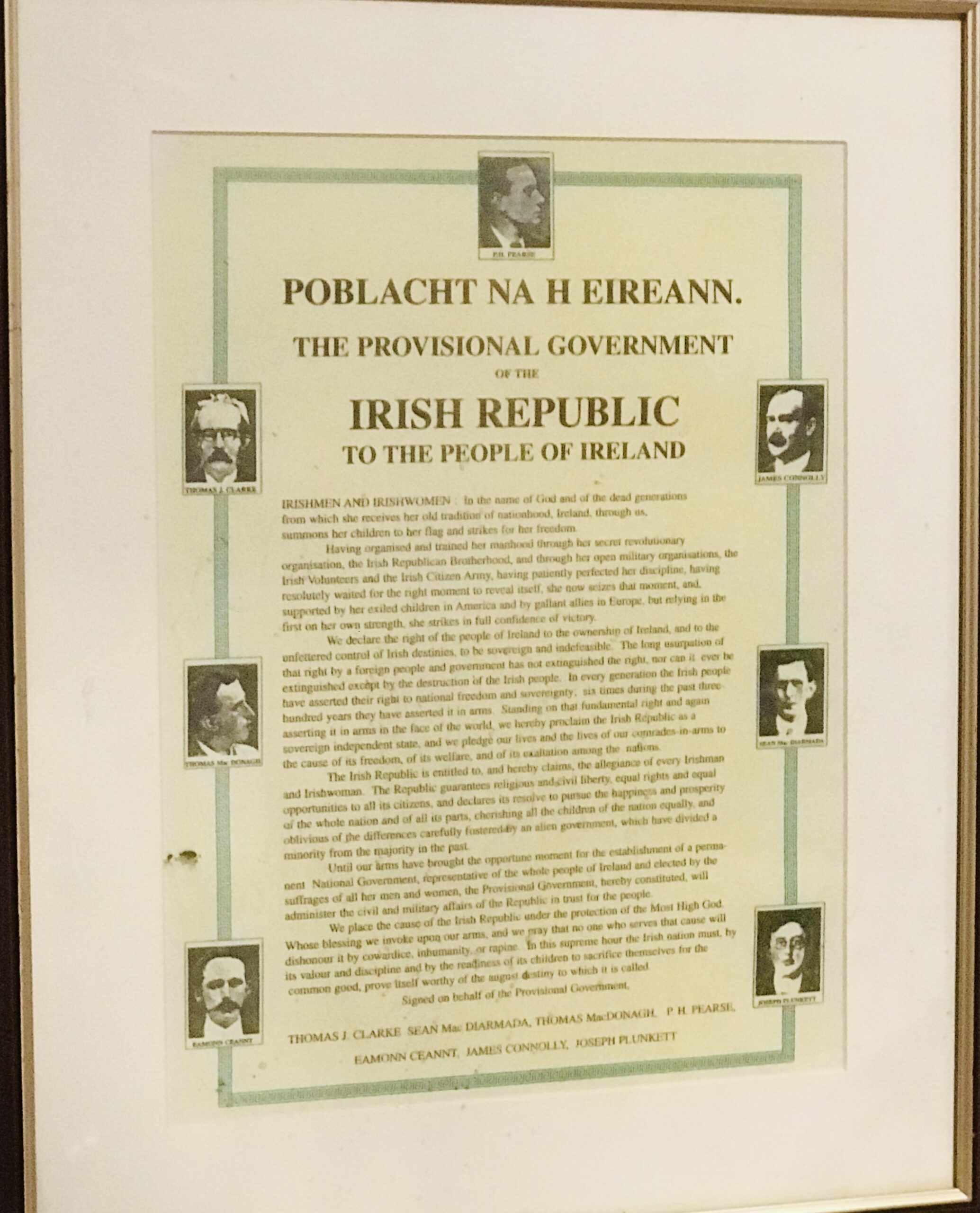