This extremely rare print commemorates three Catholic priests killed during the bloody  War of Independence between the IRA and British Crown Forces : Fr James O’Callaghan Clogheen,Canon Magnier Dunmanway and Fr Michael Griffin Galway .Indeed the 100 year anniversaries of three callous murders are all due in the next few months.

Fr O Callaghan was shot in cold blood in Cork city by a group of drunken Black and Tans.Canon Magnier,an elderly priest in poor health, was shot along with a young parishioner outside the village of Dunmanway in Co Cork and Fr Griffin was taken from his home and assassinated in Galway .An estimated 20,000 people attended his funeral.

This poignant and extremely rare print,dating from that period pays homage to these holy men who were all cruelly murdered in cold blood whilst unarmed by tyrannical British Military forces.

The notorious murder of a young West of Ireland priest who was lured from his home before being shot in the head and buried in a bog by British forces is to be commemorated with a series of events in Galway City next year.

The disappearance and murder of Fr Michael Griffin (28) sent shock waves across Ireland in November 1920, prompting a front-page news story in the New York Times, a cable expressing outrage from the Bishop of Chicago, and tough questions about British atrocities in Ireland in the British Parliament.

It was one of the most notorious killings of the War of Independence when reprisals were commonplace, and the hated Black and Tans – recruited from Britain to put the rebellious Irish in their place – roamed the land.

The body of the popular young curate was discovered in an unmarked grave in bogland a few miles west of Galway City six days after his disappearance and, from the outset, locals in Galway blamed the Black and Tans for the shocking crime.

An estimated crowd of 12,000 people gathered outside St Joseph’s Church in Galway City for his Requiem Mass, which was concelebrated by the Archbishop of Tuam, the bishops of Galway and Clonfert, and almost 150 priests from across the West of Ireland.

A native of East Galway, Fr Griffin was suspected of having republican sympathies by British forces at the time, who were angered by the disappearance of a local primary school principal, Patrick Joyce, a week before the young priest went missing.

Joyce was accused of feeding information to the crown forces by members of the Irish Republican Brotherhood (IRB), who had intercepted five of his letters at the mail sorting office in Galway.

Collusion with the despised British crown forces was seen as treason at the time and Joyce was shot in the head by republicans after they presented him with evidence at a secret trial in an isolated house outside the city.

November 1920 was a particularly violent time in Galway. A pregnant young woman had been shot by the Black and Tans outside her family home in rural Ardrahan, two Galway city men had been shot dead, and republican prisoners were on hunger strike in Galway gaol.

Men from the area had been interned without trial, there was a curfew across the city, and British forces were highly suspicious of young priests like Fr Griffin, who were believed to have republican sympathies.

Members of the St Joseph’s Parish Council formed a new committee this week to organize a series of events in Fr Griffin’s memory in Galway in November of next year.

Although the city will be in “party mode” when Galway becomes the European Capital of Culture in 2020, committee chairman Cllr John Connolly believes people need to remember their history and the sacrifices made in Galway to secure Irish freedom. 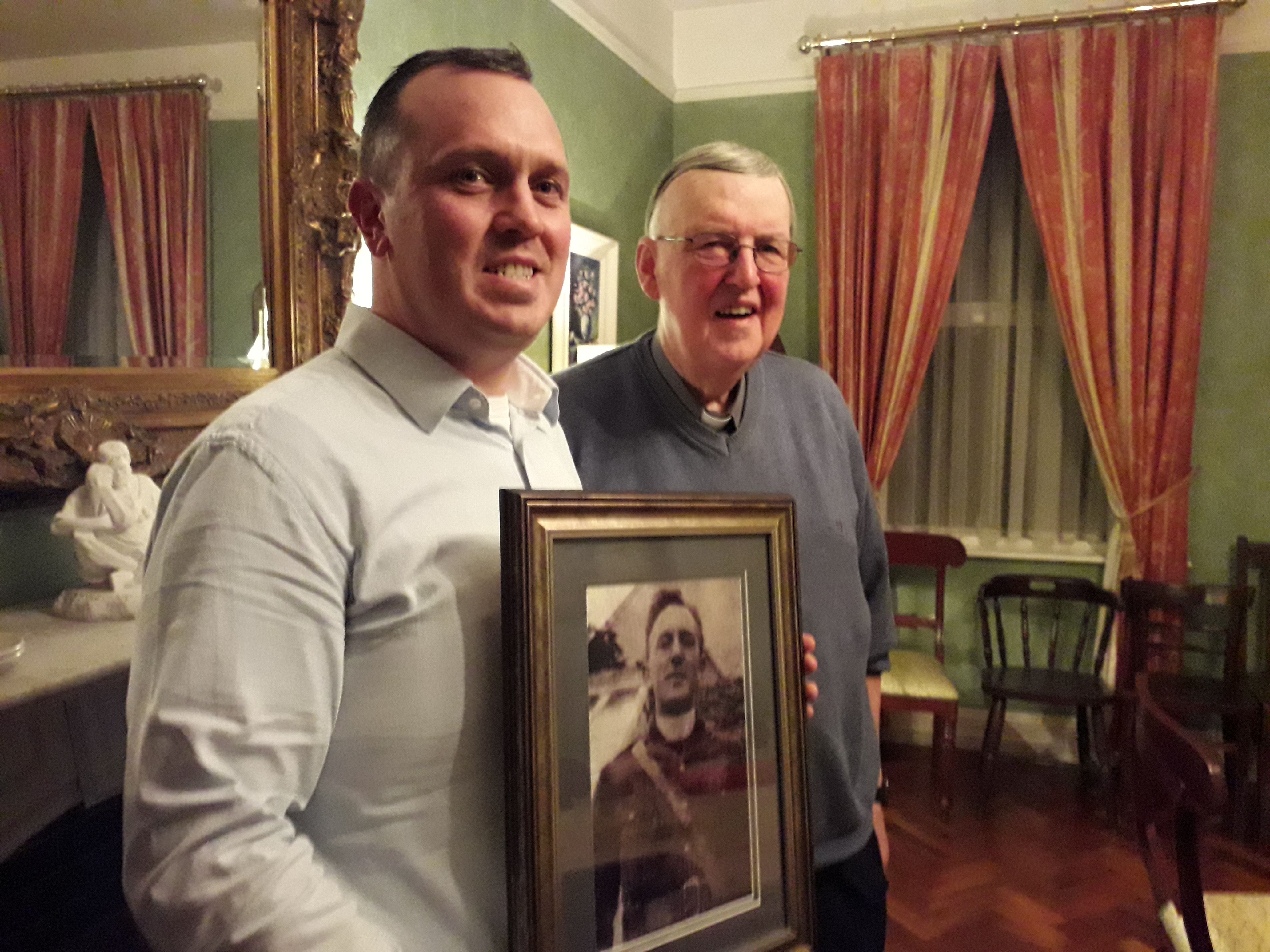 “A lot of people don’t realise how tough life was in Galway during the War of Independence. Between the beginning of September and the end of November 1920, you had the death of Seamus Quirke, Sean Mulvoy, and Michael Walsh, who was a member of the Urban District Council,” Connolly told IrishCentral this week.

“They were all known republicans and republican sympathisers. You also had the death of Patrick Joyce, who was the principal of Bearna National School, who was of a different political persuasion. He was considered an informer, who was informing the British forces in Galway of the activities of the Irish Republican Brotherhood (IRB).”

The British believed Fr Griffin had given the last rites to Walsh and Quirke, two well-known republicans in Galway. They also believed he may have heard the last confession of Patrick Joyce and that he knew who had abducted him.

Controversy surrounded Joyce’s case for decades, as his body was only found in a field to the west of Galway in the 1990s. His direct family – who emigrated to Australia – always maintained his innocence of collusion allegations.

“The Black and Tans really went on the rampage in Galway when Joyce disappeared, throwing grenades into houses, killing livestock belonging to people, and burning the premises of the Galway Express newspaper,” recalled Connolly this week.

“Fr Griffin went missing on November 14 and his body was found on the 20th. Locals believed that people in the area knew where the body was, but they were afraid of uncovering it in case of reprisals from British forces, who were searching for Patrick Joyce at that stage,” said Cllr Connolly.

It is known that three men called to Fr Griffin’s house at Montpellier Terrace late on a Sunday night and that he agreed to accompany them. A neighbor heard him speak to the men, who were Irish, at the front door and he was never seen again.

Historians believe the British shot him at their nearby base at Lenaboy Castle, Taylor’s Hill, that same night and then dumped him in an unmarked grave.

Locals found the body on the following Saturday evening but were so afraid of the British that they waited until 7 am on Sunday morning before bringing his body to St Joseph’s Church in the city. Fr Griffin was found with a bullet in his head, indicating he had been shot at close range.

“He was brought in on a horse and cart. They had to disguise the cart with large milk churns, in case the British forces stopped them. The British were still looking for Patrick Joyce and they were upset that he had been kidnapped. They saw his disappearance as a direct threat to their own intelligence operation,” explained Connolly.

“The idea that a clergyman would be treated like this was a new low I think for the British forces in the city and, indeed in the country, that they had taken this action against a priest.”

Fr Griffin from Gurteen, Co Galway, had a great love for the Irish language and was popular for his dealings with the old, the young, and the poor. He was moved by the injustice he witnessed around him every day due to the British occupation.

As soon as he was reported missing, locals in Galway blamed the British crown forces. After his disappearance, Bishop O’Dea and the priests of Galway issued a statement to condemn his abduction from his home.

“We cannot but hold the British Government responsible for this outrage upon the Catholic priesthood of Ireland,” they said.

“He has been secretly forced from his house in the dead of night by undisciplined men. Without warrant, or charge, or proof of wrongdoing he has been deprived of his liberty and, for all we know, his life. Unhappily, the only uncommon feature in this case is that he is a priest; the crime in this respect being almost unique; in as much as every civilised country in the world recognises priests as men of peace, and treats them as such.”

Connolly and Fr Martin Downey, Parish Priest of St Joseph’s, have formed a new committee to organize a series of events to remember the popular young priest next November.

“Really and truly, Fr Griffin got no trial. It’s fitting that his centenary should be commemorated because it was a bleak time in Galway. That a highly respected member of the community was taken out and killed like this, we do need to remind ourselves that Galway was a dark place at the time and the sacrifice of those who lost their lives should not be forgotten,” said Connolly.

Reprisal Killing of Cork Priest
In the aftermath of the devestating attack on a police patrol at Blackpool in Cork City on May 14, 1921, in which three RIC members lost their life, large forces of military and police flooded the area and much of the Blackpool area was ransacked. Several arrests were made and throughout the city, rumours circulated of major military operations involving widespread savage reprisals.
Just before 4am, on the following morning, the Sundays Well home of Alderman Liam De Roiste was raided by a group of masked men, all members of the Royal Irish Constabulary. He himself was not at home, but Father Seamus O’Callaghan, a curate based at Clogheen on the outskirts of the city, happened to be in the house at the time. Having been awakened by the hammer­ing at the door, Fr O’Callaghan went to the window and informed the men outside that De Roiste was not at home.
The front door was then bro­ken in and at least one of the police ran up the stairs and fired a number of shots at the priest, who fell mortally wounded. The assailaints then made their escape.
Fr O’Callaghan died a number of hours later. A native of Newcestown, West Cork, he was widely admired by the people of Cork having, as a young man, closely identified himself with the Nationalist cause. His funeral was attended by many thousands, despite widespread intimidation of the mourners by crown forces. He is buried in the grounds of the Church of the Most Precious Blood, Clogheen. 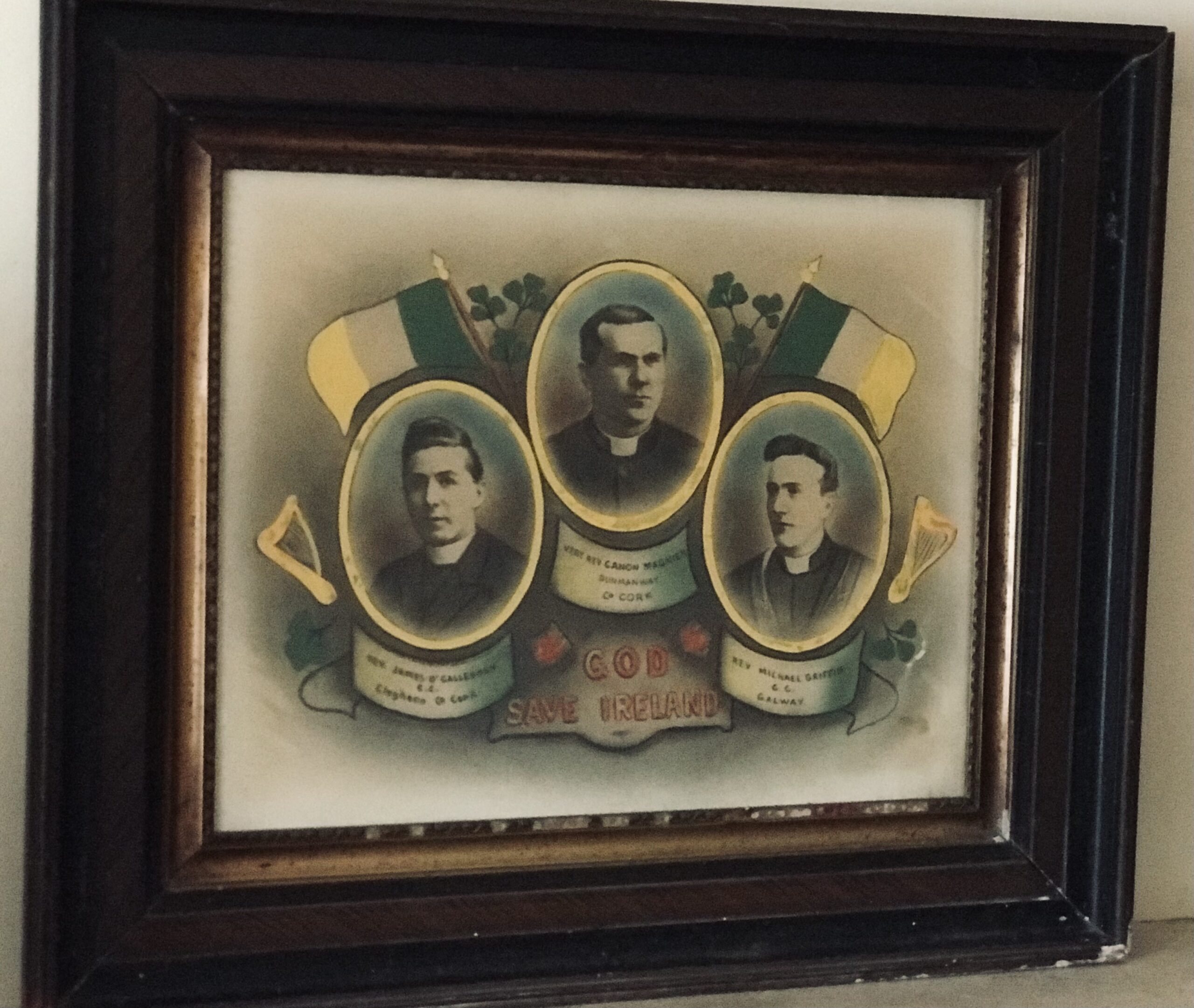 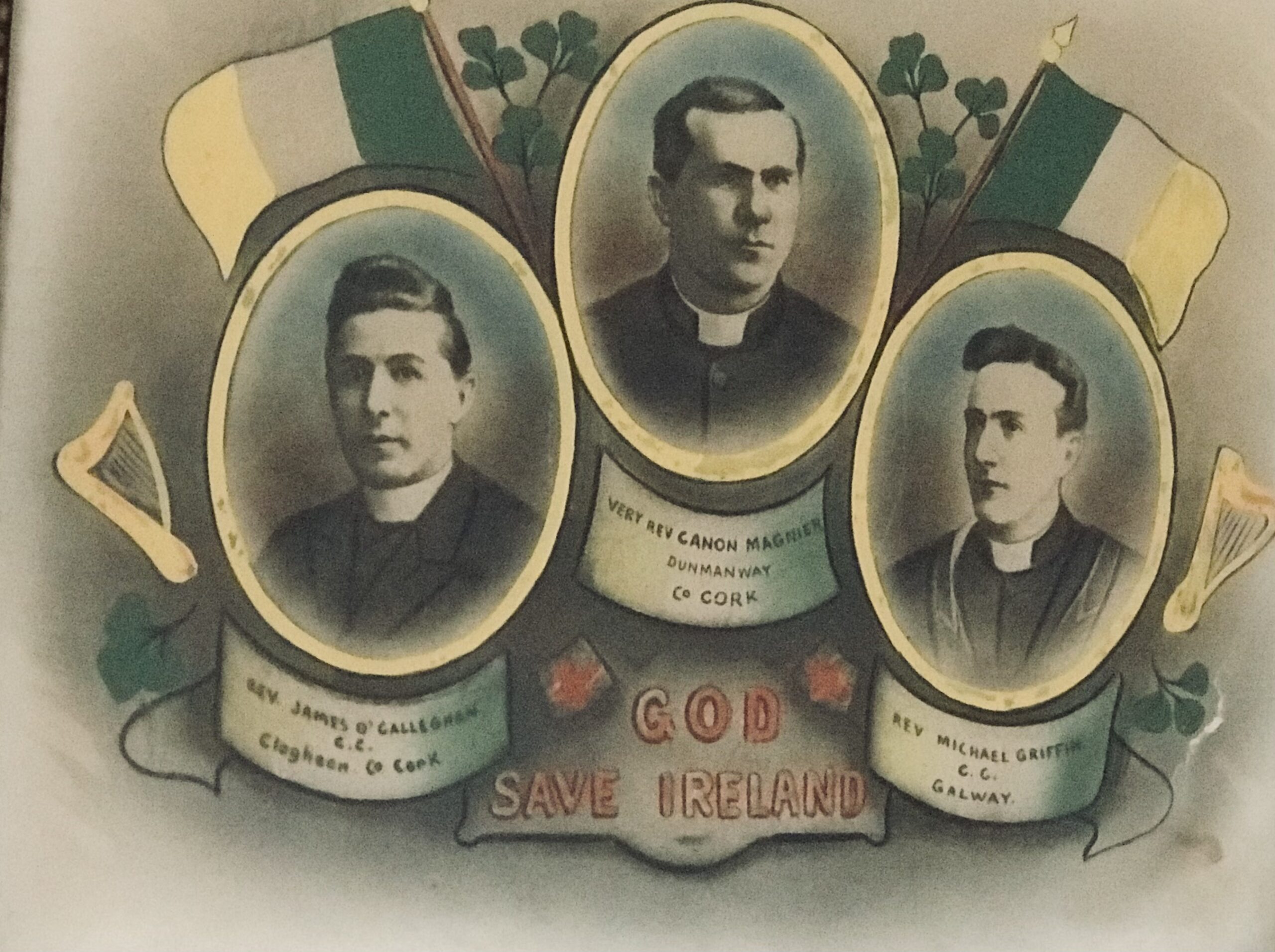 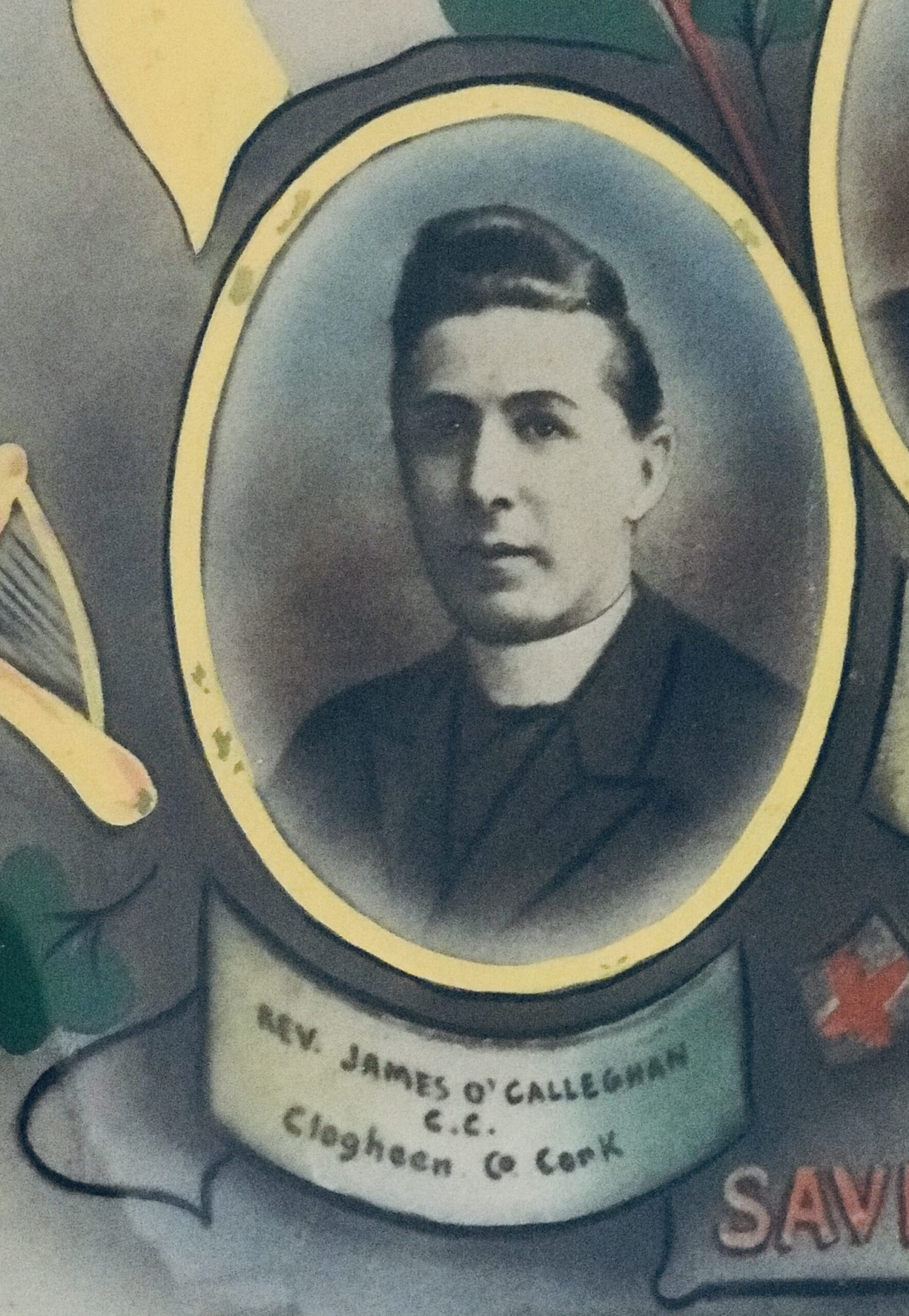 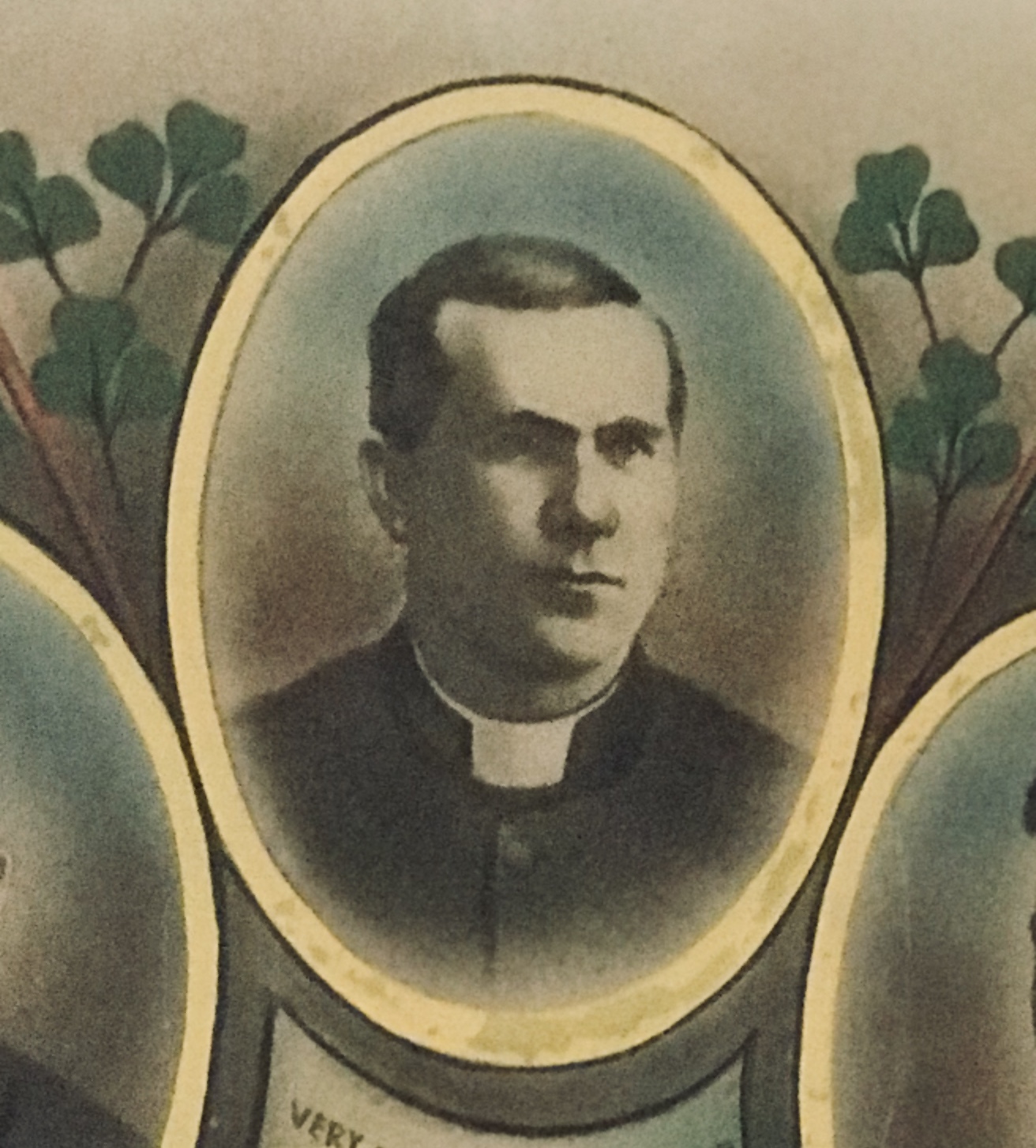