The great John B Keane once said: “The Listowel Races is a state of mind.” Anyone who has attended the festival will know this statement to be an undeniable truth. Because for one divine week in September, a spotlight from the gods shines on Listowel.

It is a shimmering star, guiding people from all over the country for a week of devilment and roguery – a place where hatred dissolves and inhibitions release.

And for as long as I can remember, I too have been steered by that very light. For a time, I thought I could never love a man the way I loved the Listowel Races.

Unlike romantic relationships, I knew where I stood in the affair. There were no miscommunications or missteps. I asked for the thrill, the passion and the romance, and all the races asked of me was the entrance fee.

Famous son: The late playwright John B Keane in his Listowel pub

Even as a child, I worshipped it. From the moment the festival lights were hung above Church Street, I knew magic was in the air. Any pocket money I had was spent at the Birds Amusements in the mart yard and any tears I had shed, as my mother told me, came when it was time to go home. As I grew older, I discovered another type of magic on the racecourse or ‘the island’ as it’s otherwise known.

It is a paradise on the River Feale filled with old friends, new acquaintances and disgruntled punters. Expats return from far-flung countries and wish for the week to never end, wanting one last race, drink or dance because one September evening spent on the island equals a lifetime of memories.

This year will mark the 162nd anniversary of the meeting. The first took place in October 1858 and, since then, has moved from a two-day race meeting to a seven-day spectacle filled with music and wren boys. Also known as the Harvest Festival, the meeting traditionally marked the end of the harvest, and farmers came to relax and enjoy the fruits of their labour. While this remains true, Listowel now attracts a variety of attendees from across the country and beyond.

The people don’t just come for racing anymore. They come for the atmosphere, the people, and the promise of the time of your life. Festivals like Galway and Punchestown may have the hype, but Listowel has the mightiest heart.

In 162 years, the island and its high jinks have survived war and politics, but it won’t escape the ravages of 2020. Covid-19 restrictions mean the Listowel Races will take place behind closed doors for the first time. Under protocol from the HRI and the Irish Horseracing Regulatory Board, race meetings are closed to the public.

North Kerry doesn’t reap the benefits of tourism as much as the southern half of the county. Killarney and Dingle are hotspots and while north Kerry has its share, tourism is not its main trade. Festivals such as the races provide much-needed boosts to the local economy.

It has been a challenging year for the small-town festival in Ireland. From the Willie Clancy week in Miltown Malbay to the Innishannon Steam Rally in Cork, localities have lost out economically and culturally. Earlier in the summer, the famous Writers’ Week Festival in Listowel was cancelled, as was the Revival Music Festival in August.

The September races complete the trifecta of festivities and are the jewel in the crown. These cancellations only added to the blow caused by the lockdown closures in March for the businesses in the town.

Jerry Behan and his son Diarmuid, owner and bar manager of the Horseshoe Bar and Restaurant on William Street, say the trade during the races tides the pubs and restaurants over until year-end.

“This year is just a complete unknown,” Jerry says. “We missed out on Mother’s Day, Paddy’s Day, Easter, Writers’ Week, Revival and now the races. Writers’ Week is nearly as big as the races for us, so it’s been a huge loss. And what you make during the races would pay the bills until Christmas.”

In a typical year, the week before the festival would be spent planning and preparing for the influx of punters; Diarmuid admits this is a part he will miss.

“During this time, we would be looking forward to race week,” he explains. “You would be getting in your orders and sorting out staff for the week. It all adds to the build-up. Usually, you would hate to be working during a big event, but I never mind working for the races.

“The craic is brilliant. But at the end of the day, our health is the most important thing.”

The Government has given the green light for ‘wet pubs’ to reopen on Monday after a six-month closure. Reopening on the week of the races is both a blessing and a hindrance to Billy Keane, the Irish Independent columnist and owner of John B Keane’s bar, first run by his playwright father.

“The worst was not knowing when we would open, so when the news came that it would be the 21st, on what happens to be the week of the Listowel Races, it was brilliant news,” Keane says.

“So everyone in town got a great boost from it and hopefully the locals will come out and I can’t wait to meet them again, but it’s going to be very restricted. During the races, if I had a pub that went all the way to Ballybunion, I’d still need more space.

“The week equates to around 22pc of my business for the year, but obviously, our numbers will be way down.”

The change in proceedings isn’t just hitting the pubs and restaurants; many other businesses feel the effects. Owner of Coco at The Arcade boutique, Jennifer Scanlan, says fashion is just as big a part of the experience as the racing itself, with Ladies’ Day usually attracting a crowd of more than 26,000.

“For me, the week before and especially the Saturday before the races are usually manic busy with women buying their bits. So I will certainly be losing that revenue.”

If you don’t come from a town or area that holds a festival like this, you might question why locals are so attached. It has such significance that anyone from the town will tell you that a different calendar dictates life. There are no weeks or months, only ‘before’ and ‘after’ the races. People in Listowel have grown up with it. It is steeped in tradition and for rural towns, this is important.

Scanlan admits it is hard to think that this year will go ahead without the full flow of the festival. “I grew up over the shop here in the centre of town and I could see the Birds Amusements right from my window. The races could never hide from us.

“It defines us as Listowel people. There really is something special here.”

Someone who shares this sentiment is horse racing commentator Jerry Hannon, a native Listowel man who discovered his love for the sport on the Island. “That’s where I got my love for racing,” he explains. “One of my earliest memories was my late dad Joe bringing me over to the island and meeting Charlie Swan, who was top jockey at the time, and the late racing photographer Liam Healy taking a photo of me with him. I saw the crowds and the atmosphere and that whet my appetite. It’s like a ritual for those of us from the town.”

Hannon will commentate on the racing over the seven days, but admits that it is at the festivals when you notice the missing crowds. “It’s been disheartening,” he explains. “It hit me in places like Killarney and Galway. Now Listowel will be the same when you won’t see those crowds crossing the bridge from the town side.”

Christy Walsh, owner of Christy’s Bar in The Square, says the races’ influence is far-reaching. “When I became involved in the Harvest Festival, I not only realised what it means for the town, but the whole of north Kerry and beyond. Accommodation is usually booked from Templeglantine, Newcastle West, Abbeyfeale and down into Tralee. Ballybunion and Ballyheigue, both of which are packed from it.”

Walsh says the town is exercising extreme caution for the week ahead, with people expected to watch the racing in local pubs. “We are still in the throes of a major pandemic,” he says. “So just for one year, maybe leave it to the locals and enjoy the races on TG4 at home and wait until we are back in action fully.”

Because the town is small, community spirit is present even when thousands of people gather there. This quality is why people return year on year and proprietors of the town have come to know the spectators as friends. They look forward to seeing them return in the future.

“You know on the Monday exactly who you’d meet inside the pub,” Walsh says. “They come back year after year and you’d be asking how in the name of God could they do seven days racing. But they do, and most of my enjoyment comes from meeting them. I’ll really miss that.”

This warmth is something Jerry Behan says will forever make the Listowel Races special. “They are like locals,” he says. “They walk in as if they’ve lived here forever. We have a crowd from Newcastle that comes over every year since we opened and on the Sunday when they leave, the hugging and kissing is something else. They always say we can’t wait for next year already. Hopefully, we will have it again when everything settles. The town will get through this and it will be back.”

And so tomorrow for its 162nd year, the island gates will open, the horses will gallop and bets will be made, but the stands will stay silent for the first time. Yet over the bridge on the other side of the River Feale, a town and its people look ahead to better times, remaining forever hopeful for a winner and waiting once more to be back in a Listowel Races state of mind. 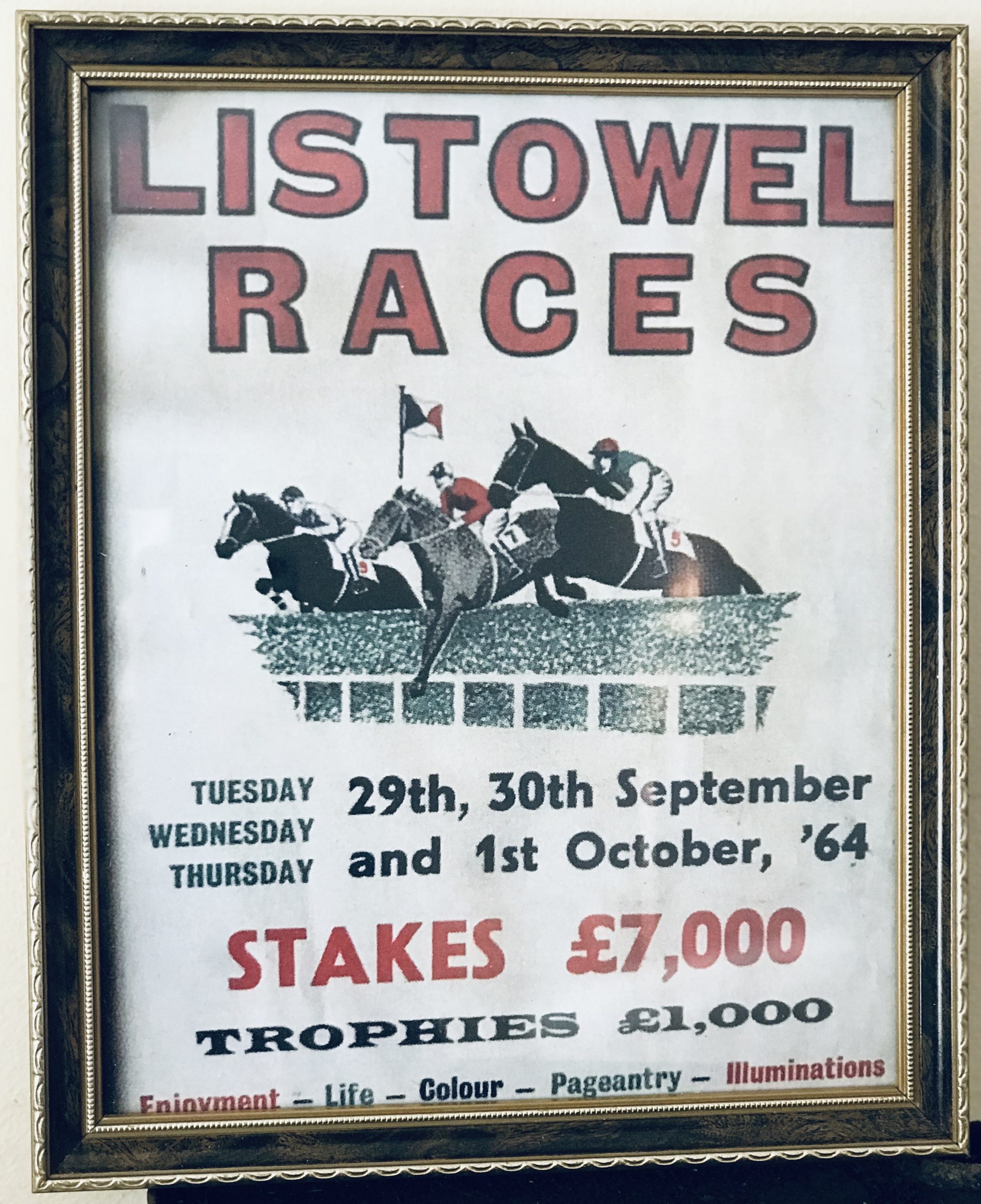 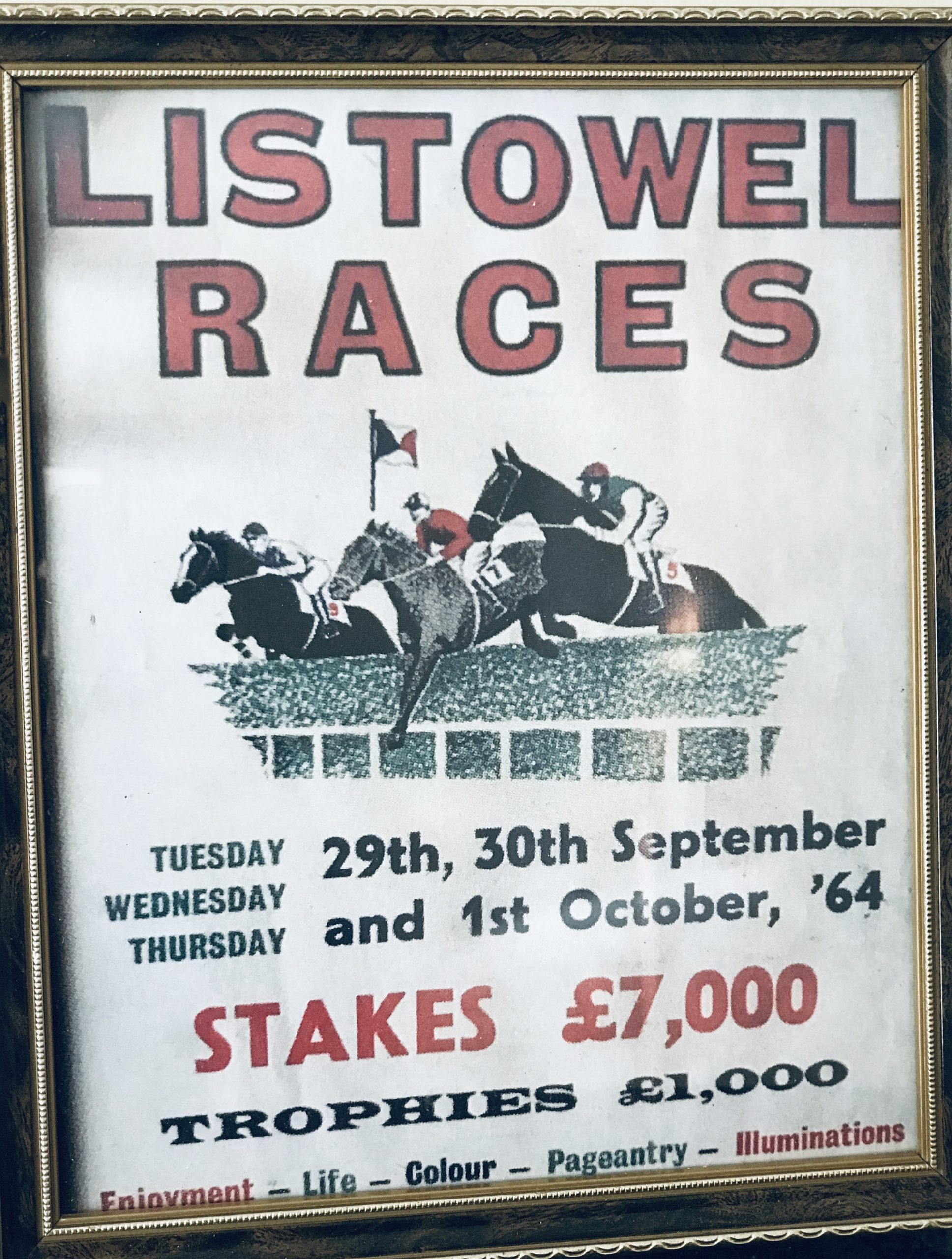 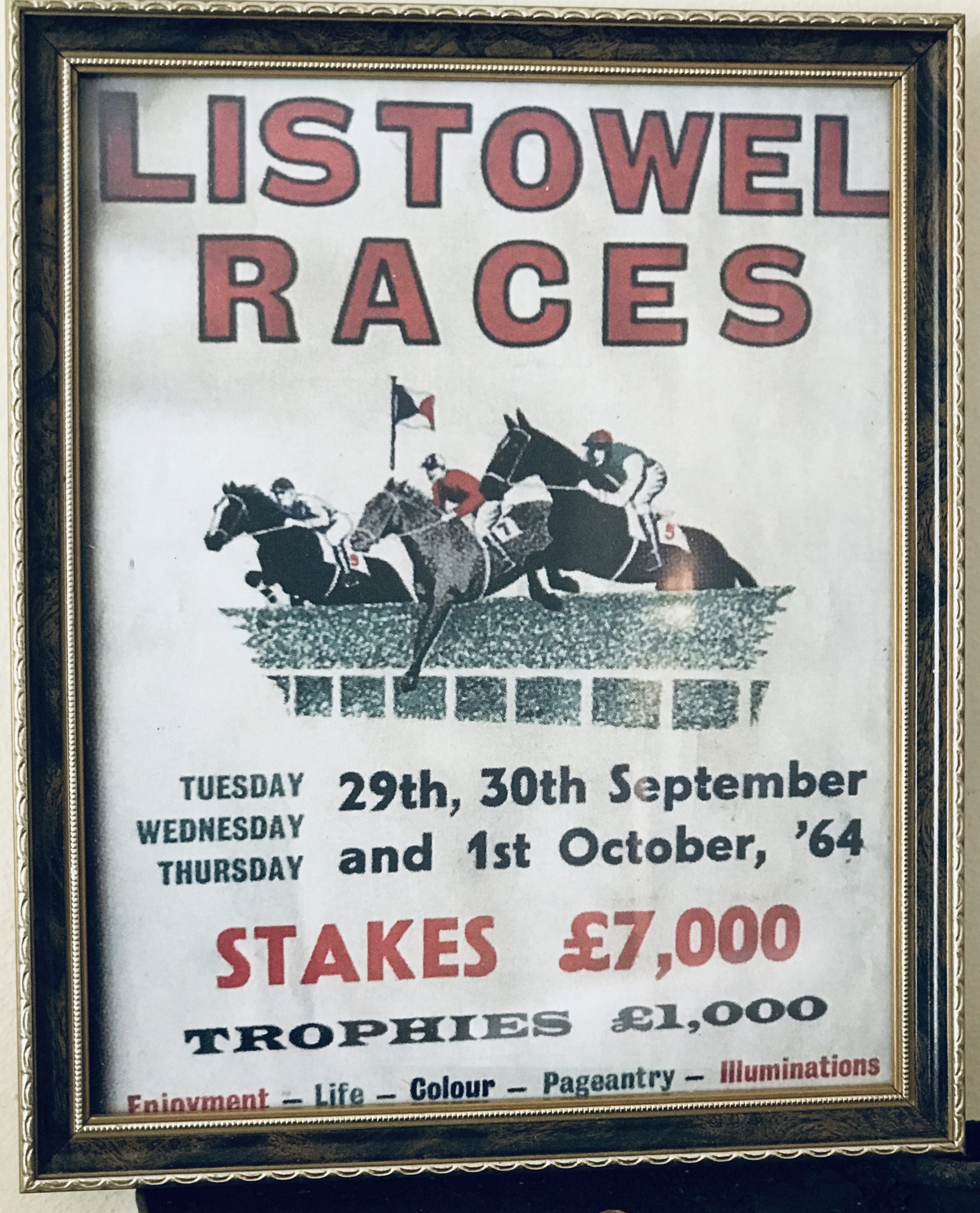