Lovely reproduction of vintage Irish Bank Notes – the old £100,£50 & £20 pound notes which existed until the arrival of the Euro.

e Irish Free State, subsequently known as Ireland, resolved in the mid-1920s to design its own coins and banknotes. Upon issuing the new currency, the Free State government pegged its value to the pound sterling. The Currency Act, 1927 was passed as a basis for creating banknotes and the “Saorstát pound” (later the “Irish pound“) as the “standard unit of value.” The legal tender notes issued under this act began circulating on 10 September 1928.

When the Irish Free State came into existence in 1922, three categories of banknote were in circulation. These consisted of notes issued by the Bank of England, the British Treasury, and six Irish banks that were chartered to issue notes. Only British Treasury notes were legal tender within the state. The issuing of banknotes by multiple private institutions was an everyday aspect of banking in Great Britain and Ireland at the time and remains so in Northern Ireland and Scotland.

A banking commission was created in 1926, the Commission of Inquiry into Banking and the Issue of Notes,[1] to determine what changes were necessary relating to banking and banknote issue in the new state. The commission was chaired by Professor Henry Parker Willis[2] of Columbia University who was Director of Research of the Federal Reserve Board in the United States. The commission’s terms of reference were:

“To consider and to report to the Minister for Finance what changes, if any, in the law relative to banking and note issue are necessary or desirable, regard being had to the altered circumstances arising from the establishment of Saorstát Éireann.”

As per the usual convention for banknote issue, banknotes are and were issued in the name of the Currency Commission or Central Bank existing at printing.

Before the advent of the euro, three series of legal tender notes were issued; these are referred to as “Series A,” “Series B,” and “Series C,” respectively. A series of notes known as the “Consolidated Banknotes” were issued but were not legal tender.

The Currency Commission devised the “Series A” notes. They were printed by Waterlow and Sons, Limited, London which was acquired by De La Rue. The commission created an advisory committee that determined the theme and design of the notes. Notes were in the denominations of 10/-, £1, £5, £10, £20, £50, and £100. Each note has a portrait of Lady Lavery, the wife of the artist Sir John Lavery, who was commissioned to design this feature. The original oil on canvas painting of Lady Lavery, titled Portrait of Lady Lavery as Kathleen Ni Houlihan (1927), is displayed at the National Gallery of Ireland on loan from the Central Bank of Ireland.

The theme on the reverse of the notes is the rivers of Ireland, which are depicted as heads taken from the Custom House, Dublin. Rivers in both the Irish Free State and Northern Ireland were chosen. Each note also contains a watermark of the Head of Erin.

This series of banknotes were never legal tender . They were equivalent to “promissory notes” that continue to be issued by some banks in the United Kingdom. Notes were issued as a transitional measure for the eight “Shareholding Banks” of the Currency Commission: Bank of Ireland, Hibernian Bank, Munster & Leinster Bank, National Bank, Northern Bank, Provincial Bank of Ireland, Royal Bank of Ireland, and Ulster Bank. These notes were first issued between 6 May and 10 June 1929 under the arrangement that the banks withdraw previous notes and refrain from issuing further notes. The consolidated notes were only issued by the Currency Commission. The last notes were printed in 1941. The notes were officially withdrawn on 31 December 1953.

The front of each note depicted a man ploughing a field with two horses. They are referred to as the “Ploughman Notes.” The notes’ denominations and the back designs were; £1 (Custom House, Dublin), £5 (St. Patrick’s Bridge, Cork), £10 (Currency Commission Building, Foster Place, Dublin), £20 (Rock of Cashel, County Tipperary), £50 (Croagh Patrick, County Mayo), and £100 (Killiney Bay, County Dublin). The name of the issuing Shareholding Bank also varied, along with the corresponding authorising signature.

The Central Bank of Ireland commissioned the “Series B” notes. They were designed and brought into circulation between 1976 and 1982. Servicon, an Irish design company, designed the £1, £5, £10, £20, £50, and £100 denominations. The £100 note was never issued or circulated. This is the only series of Irish banknotes without a note of this denomination.

The theme of these notes was the history of Ireland. Each note featured the portrait of a historical figure. The Lady Lavery portrait, from Series A, was retained as a watermark.

This series of notes called “Series C” was the outcome of a limited competition, held in 1991, to which nine Irish artists were invited. The winner and designer of the series was Robert Ballagh. This series of notes had denominations of £5, £10, £20, £50 and £100. No Irish pound note was designed because the currency had a coin of this value since 1990. This series was introduced at short notice, with the £20 note being the first to be issued, following widespread forgery of the Series B £20 note. The last banknote of the Series C issue was a £50 note that was issued in 2001.

The theme for this series was people who contributed to the formation of modern Ireland. To this effect, it includes politicians, a literary figure, and a religious figure. The political figures do not include anyone directly associated with the Irish War of Independence, which eventually led to the creation of the Irish Free State. 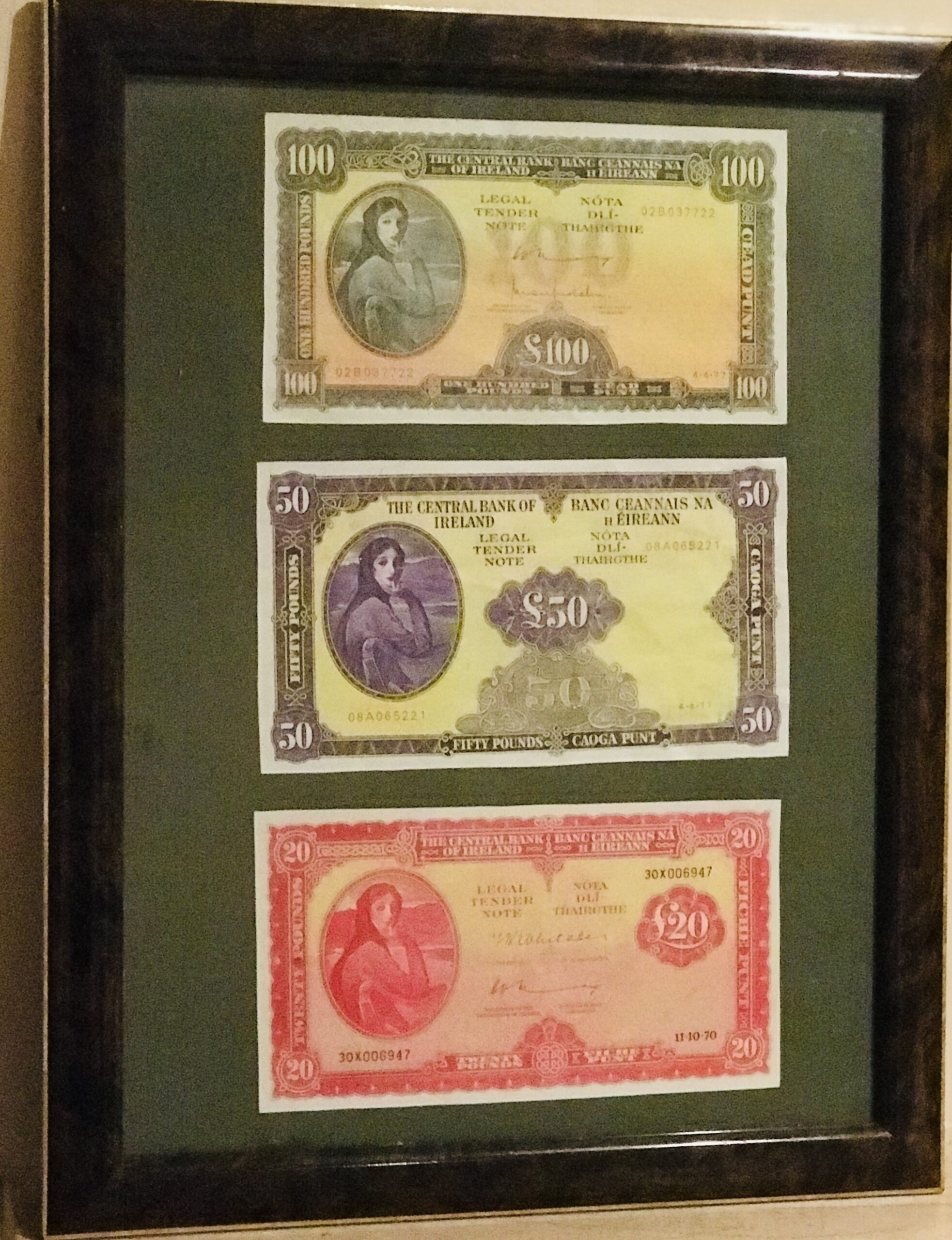 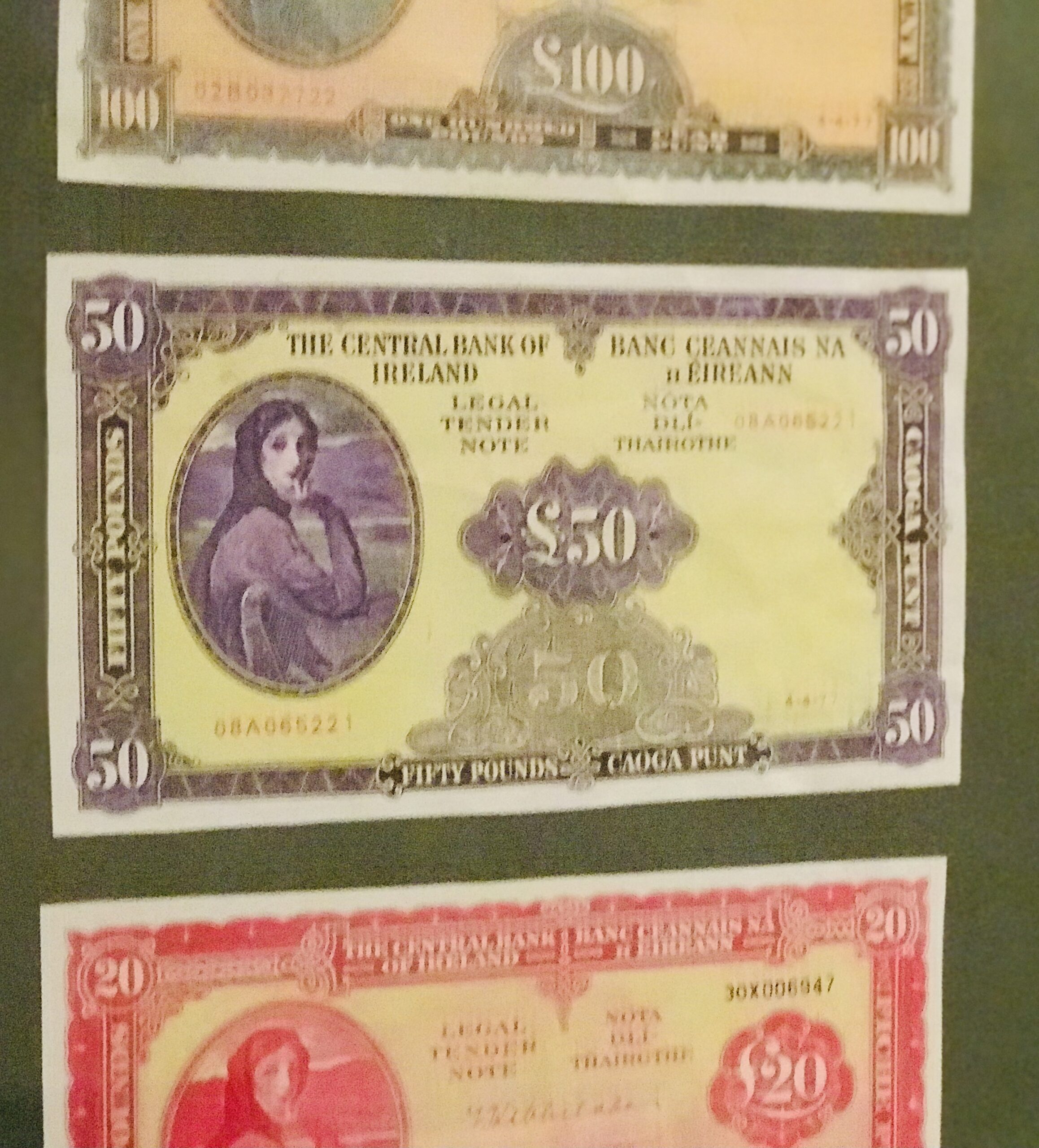 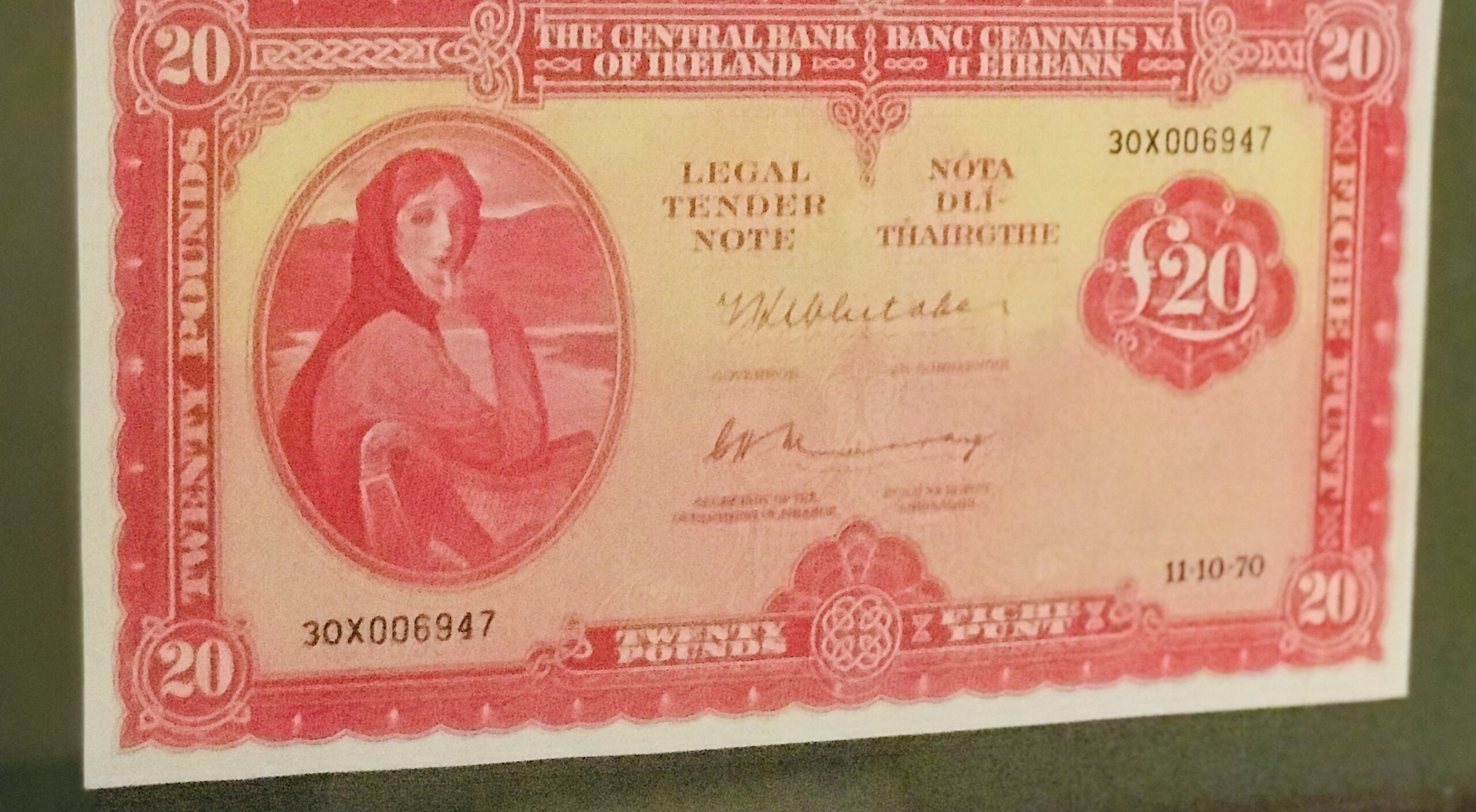 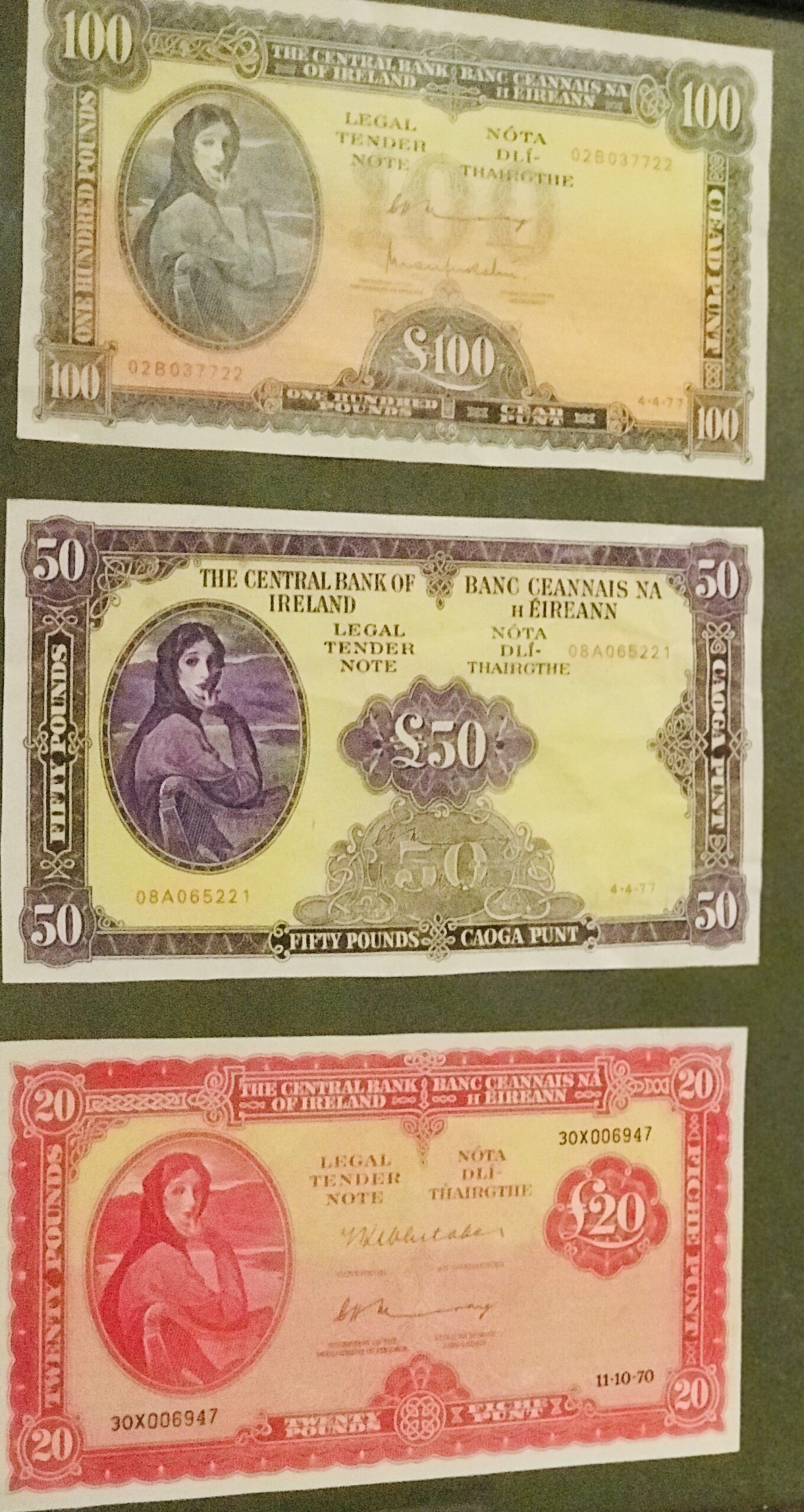 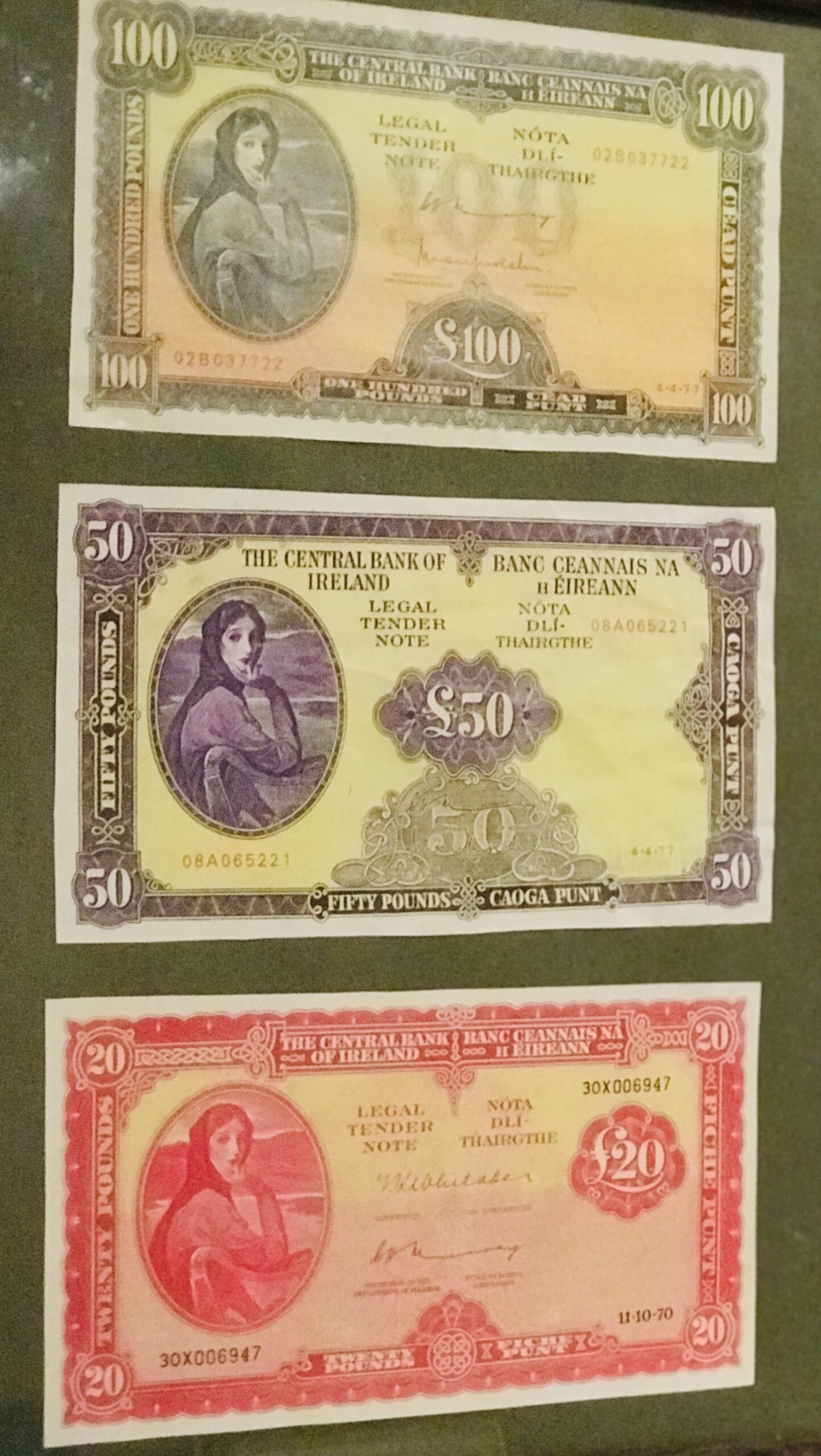