Nostalgic,atmospheric photo of Pope John Paul II arriving at Dublin Airport in 1979 on board an Aer Lingus 747-it was the first time a Pope had visited Ireland .

Pope John Paul visited Ireland from Saturday 29 September to Monday, 1 October 1979, the first trip to Ireland by a pope. Over 2.5 million people attended events in Dublin, Drogheda, Clonmacnoise, Galway, Knock, Limerick, and Maynooth. It was one of John Paul’s first foreign visits as Pope, who had been elected in October 1978. The visit marked the centenary of the reputed apparitions at the Shrine of Knock in August 1 1878. 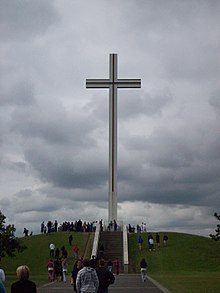 Papal Cross erected for the mass in Phoenix Park

An Aer Lingus Boeing 747, named St Patrick, brought Pope John Paul II from Rome to Dublin Airport. The Pope kissed the ground as he disembarked. After being greeted by the President of Ireland Patrick Hillery, the Pope flew by helicopter to Phoenix Park where he celebrated Mass for 1,250,000 people, one third of the population of the Republic of Ireland.

Afterwards he travelled to Killineer, near Drogheda, where he led a Liturgy of the Word for 300,000 people, many from Northern Ireland. There the Pope appealed to the men of violence: “on my knees I beg you to turn away from the path of violence and return to the ways of peace”.

The Pope had hoped to visit Armagh, but the security situation in Northern Ireland rendered it impossible. Drogheda was selected as an alternative venue as it is situated in the Catholic Archdiocese of Armagh.

Returning to Dublin that evening, the Pope was greeted by 750,000 people as he travelled in an open top popemobile through the city centre and visited Áras an Uachtaráin, the residence of the Irish President.His final engagement was a meeting with journalists at the Dominican Convent in Cabra.The journalists from the international media broke into a spontaneous rendition of ‘For he’s a jolly good fellow’ when the Pope arrived. Pope John Paul spent the night at the nearby Apostolic Nunciature on the Navan Road in Cabra.

Pope John Paul began the second day of his tour with a short visit to the ancient monastery at Clonmacnoise in County Offaly.With 20,000 in attendance, he spoke of how the ruins were “still charged with a great mission”.Later that morning he celebrated a Youth Mass for 300,000 at Ballybrit Racecourse in Galway. It was here that the Pope uttered perhaps the most memorable line of his visit: “Young people of Ireland, I love you”.That afternoon, he travelled by helicopter to Knock Shrine in County Mayo which he described as “the goal of my journey to Ireland”.The outdoor Mass at the shrine was attended by 450,000. The Pope met with the sick and elevated the church to the title of Basilica. He lit a candle at the Gable Wall for the families of Ireland. Monsignor James Horan, instrumental in the shrine’s development, welcomed the Pope to Knock.

The final day of the visit began with a brief early morning visit to St Patrick’s College, Maynooth, the National Seminary, in County Kildare.Some 80,000 people joined 1,000 seminarians on the grounds of the college for the brief visit. A dense fog delayed the Pope’s arrival from Dublin by helicopter. The final Mass of the Pope’s visit to Ireland was celebrated at Greenpark Racecoursein Limerick before 400,000 people, many more than had been expected. The Mass was offered for the people of Munster. Pope John Paul left Ireland from nearby Shannon Airport travelling to Boston where he began a six-day tour of the United States.

Pope John Paul delivered 22 homilies and addresses during the course of this visit, including a televised message for the sick broadcast on RTÉ on the evening of his arrival in Ireland. Audio files of his more significant speeches are preserved on the website of the Irish Catholic Bishops Conference.Many of the temporary fixtures and ornaments at the public masses were auctioned two months after the visit to help defray its cost. A Time Remembered – The Visit of Pope John Paul II to Ireland was produced by RTÉ in 2005.

Many children were named John and Paul in the aftermath of the papal visit. There were many Johns and Pauls beforehand but there was a huge increase in the amount of children called after the Pope’s taken names. Some children were also given both names as their Christian name and were known as John Paul in honour of the Pope’s visit. 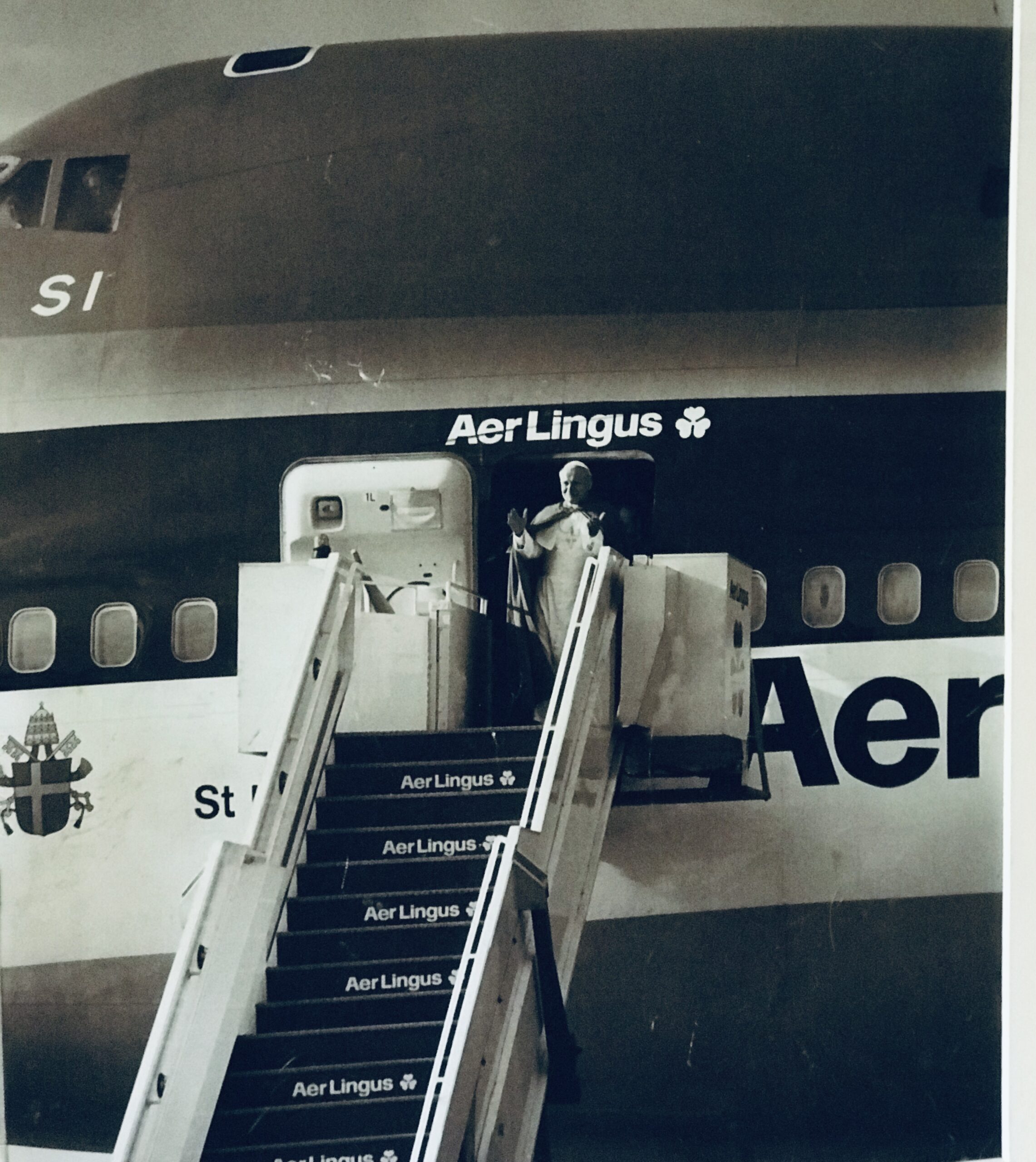 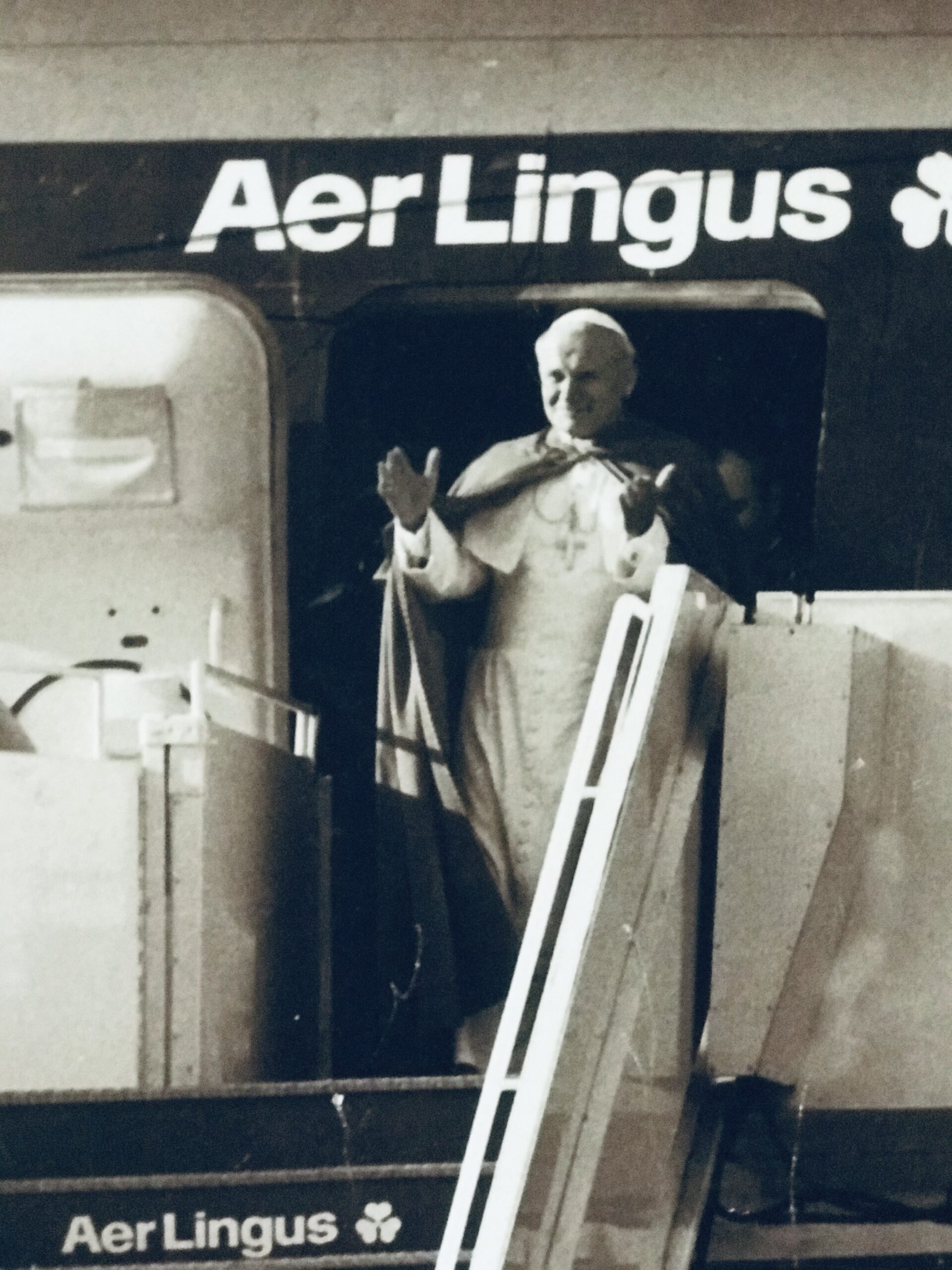 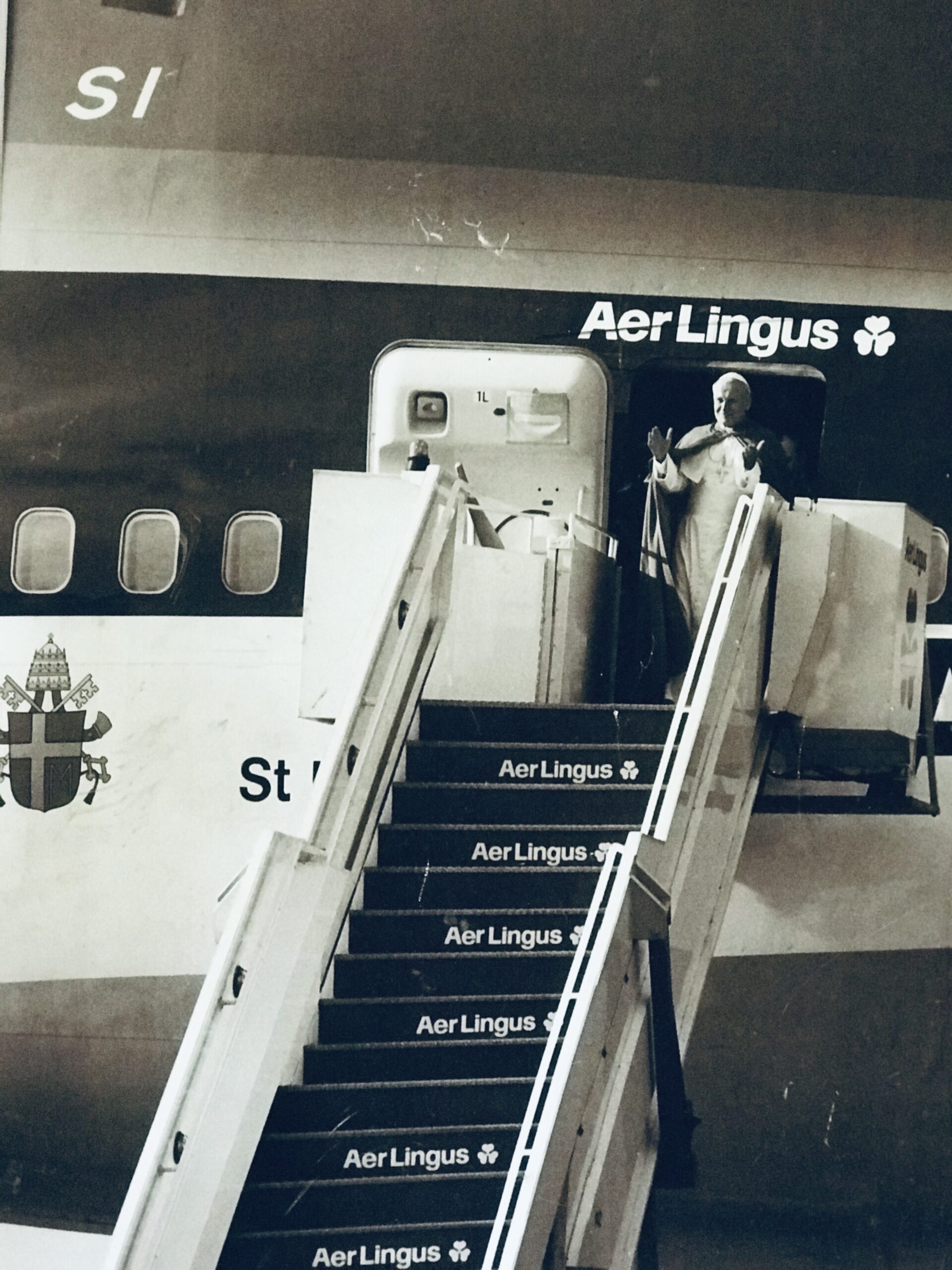 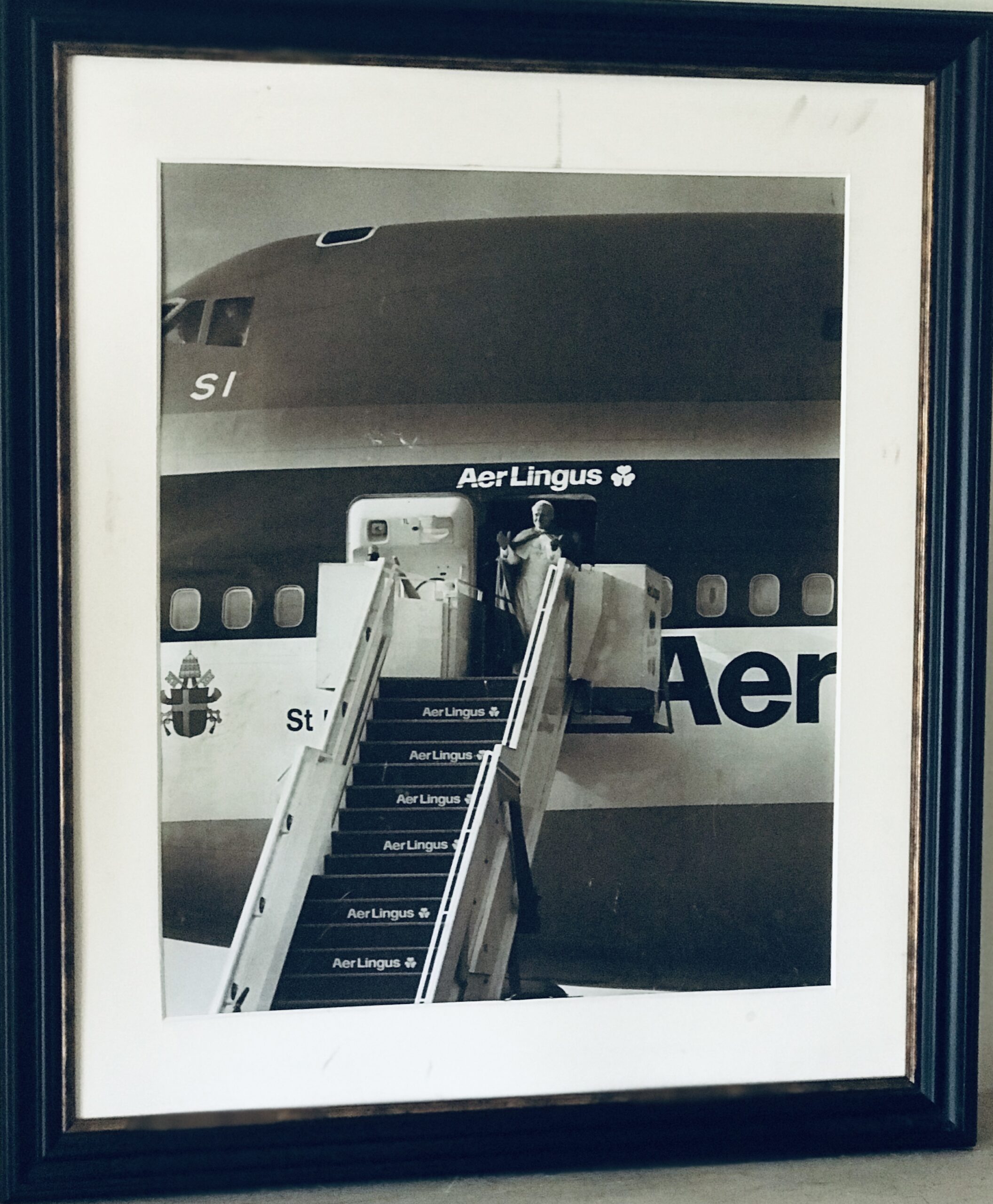 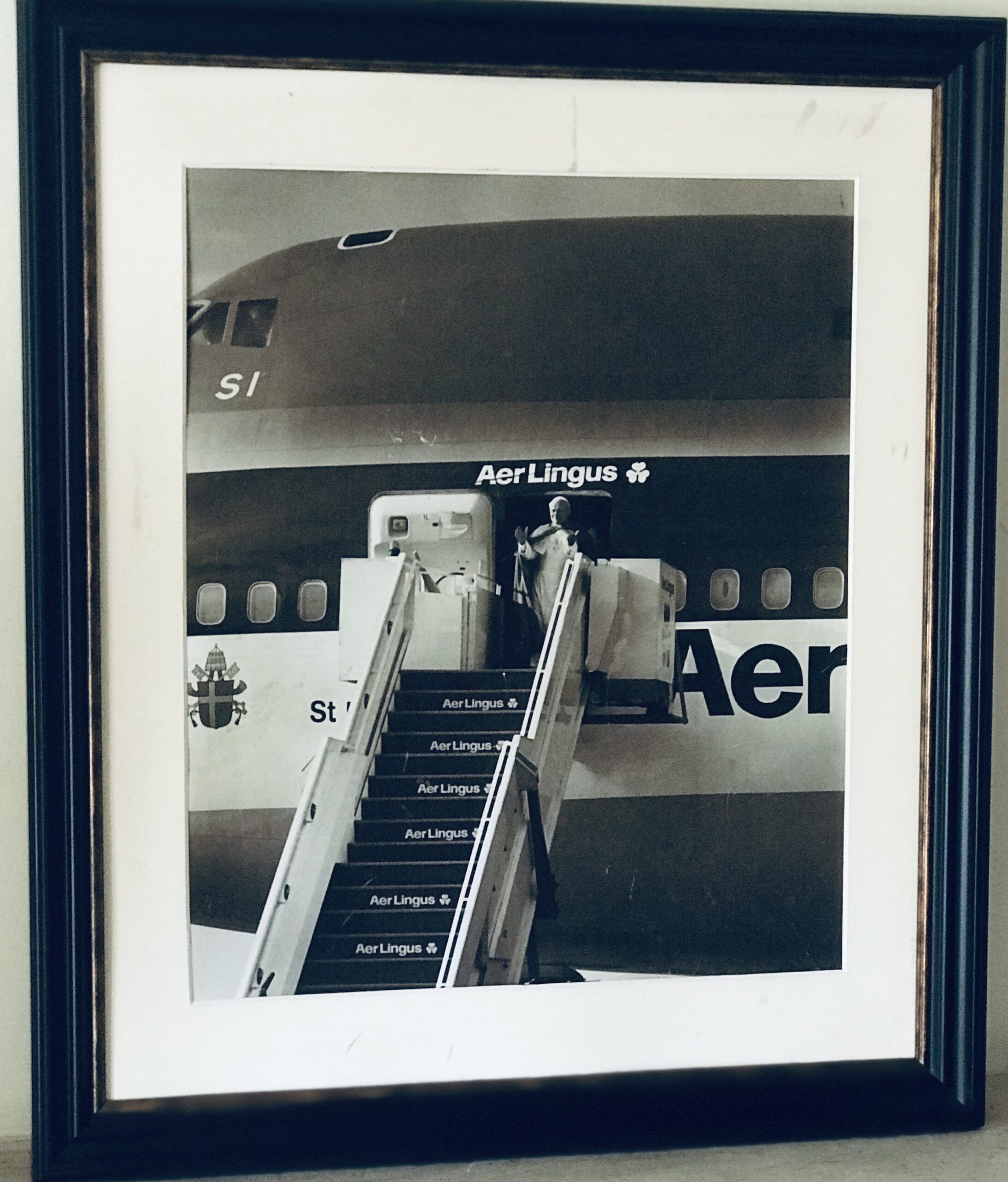