This historic brand of whiskey has now  been revived by the Cooley Distillery (which is now part of Beam Suntory).The brand was previously owned by the Watt Distillery, which (according to the company) dates back to 1762. The Tyrconnell was their flagship brand, and was named after a racehorse owned by Andrew Alexander Watt. The horse was a chestnut colt that won at 100 to 1 odds in 1876 in the Irish horse race called The National Produce Stakes.The actual horse race is depicted on the label.

Tír Chonaill would have encompassed the modern county of Donegal and much of her neighbouring counties of Sligo, Leitrim, Fermanagh and Tyrone. The Kingdom survived until 1601.
In 1876, the Donegal – Derry based Watt family who owned one of the largest whiskey distilleries in Ireland entered a racehorse called “Tyrconnell” (after the local ancient kingdom) in the Irish Classic “National Produce Stakes” where it won against all the odds at an incredible 100 to 1. This spectacular achievement inspired the Watt whiskey distillery in Derry to celebrate the occasion with a special commemorative Tyrconnell Irish whiskey label. The Tyrconnell was, before American prohibition, one of the biggest selling whiskey brands in the United States. Pre-prohibition photos taken in Yankee Stadium in New York show Tyrconnell Irish Whiskey billboards in positions of prominence at the venue. All three of the company’s whiskey brands enjoyed great success in the export sector. Sales in England, Canada, Australia, Nigeria and the West Indies and the U.S. put Derry on the commercial map as never before. Unfortunately, with the decline of Irish Whiskey after prohibition, Watts distillery and Tyrconnell whiskey faded and died like the majority of Irish whiskey distilleries and brands of the time.

When the Cooley Irish Whiskey Distillery was recommissioned by Dr. John Teeling a few years ago, Tyrconnell was one of the old iconic Irish whiskey brands that Cooley brought back to life. Cooley Distillery and the Cooley Irish Whiskey brands are now owned by the Japanese – American whiskey giant Beam Suntory. Today, Tyrconnell whiskey is available as a standard 10 Year Old Cooley Single Malt and is also available through the Tyrconnell Irish Whiskey Finishes Collection in Port Pipe, Madeira Cask and Sherry Butt finishes at 46% abv as well as a 15 Year Old Single Cask expression.

Andrew Watt (4 November 1853 – 11 October 1928) was an Anglo-Irish businessman with a net worth of over £900,000 at his death in 1928, worth £51.8 million in 2016.He was born in 1853 to Samuel Watt of Thornhill and his wife Jane Newman, daughter of Captain Robert Newman, R.N.. He was educated at Foyle College and then at home by tutors. His family were gentry who had arrived at Claragh in County Donegal during one of the Ulster Plantations.He was the owner of Watt’s Distillery, one of the largest distilleries in Ireland, and the creator of many whiskies including the famous Tyrconnell,which he named after his racehorse that won the National Produce Stakes against the odds of 100 to 1.

During industrial unrest of 1921, brought about by prohibition in the United States and the First World War, Watt’s workers at the distillery were made redundant after challenging his authority. Watt is said to have stood on a barrel outside the gates to his distillery in Bogside, whilst the workers were on strike, and shouted, ‘Well men, I shall put it to you like this …what is it to be? Will you open the gates?’ To which the workers retorted, ‘The gates stay shut!’ This prompted Watt to reply, ‘Shut they are, and shut they shall remain!’ Watt subsequently closed down the distillery at great economic expense.

On 7 October 1895, he married Violet Flora de Burgh, daughter of George de Burgh and Constance Matthews, with whom he had 4 sons and 2 daughters.He served as High Sheriff of County Londonderry from 1886 to 1887.He was a member of Boodle’s. He died at Easton Hall, where he lived in England after he left Ireland.

Below is an additional and very interesting  article from the Derry Historical Journal chronicling the rise and fall, like so many other Irish Whiskey distilleries, of the once all conquering Watts “Tyrconnell” brand.

By 1887 Watts Distillery at Abbey Street was the largest in Ireland and had become a world leader in whiskey production.

At that time the company’s director, David Watt, installed a second Coffey still – an invention by Aeneas Coffey which revolutionised the whiskey industry – to boost output to an incredible two million gallons a year.

The firm developed three major brands, Tyrconnell, Favourite and Innishowen. In 1876, Andrew Alexander Watt entered a racehorse called “Tyrconnell” in the Irish Classic ‘National Produce Stakes’ and it won against all the odds at an incredible 100 to 1. This spectacular achievement inspired the Watt distillery to celebrate the occasion with a special commemorative Tyrconnell label. The Tyrconnell was, before prohibition, one of the biggest selling whiskey brands in the United States. Pre-prohibition photos of Yankee Stadium in New York show Tyrconnell billboards in positions of prominence at the venue. All three of the company’s brand names enjoyed great success in the export sector. Sales in England, Canada, Australia, Nigeria and the West Indies and the US put Derry on the commercial map as never before.

Water used in the distillery came from the surrounding Derry hills and was stored in reservoirs on site. The wheat and maize stores were immense. At any one time, the warehouses, ranging in size from two to four storeys in height, contained 2,000 tons of wheat and barley; 1,000 tons of maize; 1,600 tons of barley, oats and maize. Attached to these buildings were two large “Malakoff’ dry-corn kilns, capable of drying 30 tons of corn every 24 hours, while in each of the two malting houses, 16 tons of grain were malted in a steep (50 ft in length by 9 ft wide) four times a week.

The Coffey stills – the revolutionary inventions designed by Aeneas Coffey – were located in a still house which was seven storeys high, the tallest building in the city apart from the Cathedral.

After dilution and casking, the barrels were taken to one of the five warehouses by an overhead railway pulled by a small steam engine. An advantage by-product from the Coffey stills was fusel oil which was used to light the distillery. It had a distinctive all pervading spirituous smell that the men carried home with them in their clothes.

The Abbey Street site had many distinctive features notably two massive chimneys, one 160 feet and the other 130 feet high.

Around 1820, James Robinson started distilling in the Waterside with a simple 76-gallon still. The operation was later acquired by the Meehan family who built a street in the Waterside called Meehan’s Row to accommodate the distillery workers. By the early 1830’s, the Watt family purchased the business and set out on a planned, systematic expansion of the site. Despite being successful, the Waterside operation always laboured in the shadow of the Abbey street distillery. In the 1880s, Abbey Street had the capacity to produce two million gallons of whiskey a year; the Waterside’s maximum output was 200,000 gallons. It is possible that the geographical location inhibited major expansion as the premises were situated on a steep hill and were flanked by two major thoroughfares.

The decision was taken in 1902-03 by the Watt family to merge with two Belfast distilleries, the small Avoniel, owned by William Higgins and the Irish Distillery Ltd., Connswater, to form the United Distilleries Company Limited (UDC). Andrew Watt would chair the new consortium that had the capability to produce the six million gallons of grain whiskey per year. The operation would have several Coffey stills and would exert great influence within the industry becoming a major supplier of grain whiskey to blenders in both Scotland and England.

Things worked perfectly at first but around 1908 and 1910, conflict arose between the UDC group and Scottish giants DCL based in Edinburgh. A series of further complicated deals between them served only to undermine confidence in both organisations. This was to be the beginning of the end for the huge Derry operation and company head, Andrew Alexander Watt closed the business after the strike of 1921. Watt himself died at his English estate in Easton Hall near Grantham in October 1928 at the age of 75.

Derry Auther Ken McCormick describes the last encounter of AA Watt with his employees in a wonderful account ‘The Folly of Andrew Watt’ in his book ‘Ken McCormick’s Derry – Heroes, Villains and Ghosts’.

“A gleaming yellow Rolls Royce slowly making its way through the gloom of a cold foggy morning in the Bogside in the year 1921. The air is tense and there are huddles of men everywhere – unbelievably, the workers of Watt’s Distillery are on strike. The eight-acre site, normally humming with activity round the clock, is as silent as the grave. But in the approaching vehicle is 68 year – old Andrew Alexander Watt, and he’s intent on a showdown . . .

“Andrew Watt asked to be helped up on to one of his own whiskey barrels and from there he addressed the crowd with the menacing words – ‘Well men, I shall put it to you like this . . . what is it to be? Will you open the gates?’

‘Very well!’ exclaimed Watt bluntly. ‘Shut they are, and shut they shall remain!’

“In that bleak instant the Watt’s whiskey enterprise disappeared from Derry forever. Over 300 jobs were lost, including the talents of some of Ireland’s finest whiskey blenders. Also left jobless were coopers, carpenters and a host of other tradesfolk and office staff, many of whose parents and grandparents had worked for Watts for generations.

“As for A A Watt, he left the city never to return. In doing so he turned his back on what would be a multi-million pound business in today’s world. Looking back, the outcome can only be viewed as a total disaster.”

It ranks as one of the bleakest days in Derry’s industrial history and marked the end the city’s reputation as a world leader in whiskey production.

The tensions created by the War of Independents and the Civil War and the introduction of new laws demanding that grain whiskey be laid down for three years before it could be sold may have had a bearing on Watt’s decision to shut up shop, although many agree that it was his expansionist tendency’s which were as Mr McCormick put it “his folly”. “Quite simply he bit off more than he could chew and left his whole operation vulnerable to a take-over,” he adds.

Meanwhile some people maintained that a fire – in which several employees died – at the Abbey St distillery in 1915 was the beginning of the end for the Watts. According to Mr McCormick: “The vats had to be opened and it seems whiskey flowed along the gutters – much to the delight of the locals, it must be said, for they were able to collect bucketfuls of the precious spirit!” 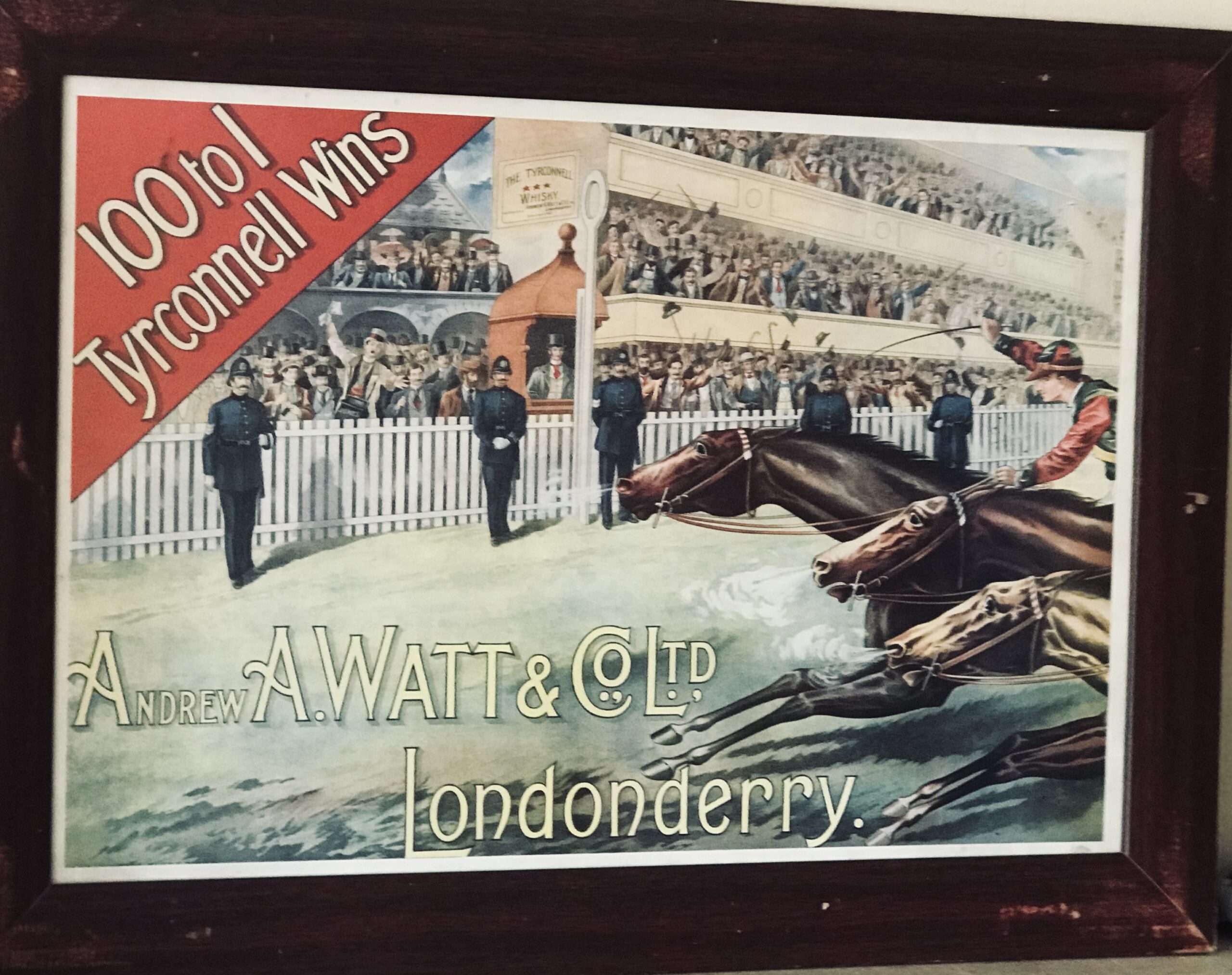 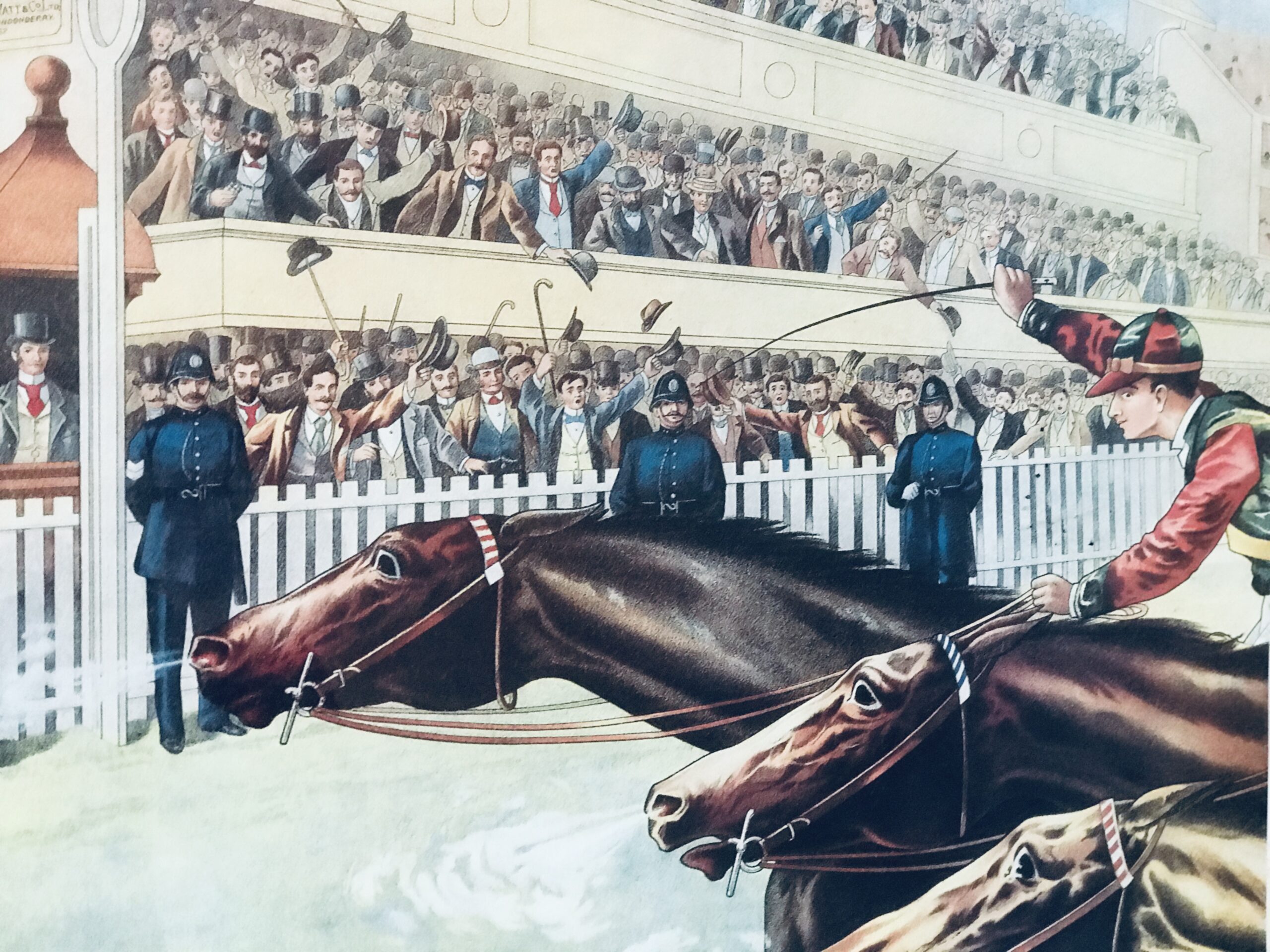 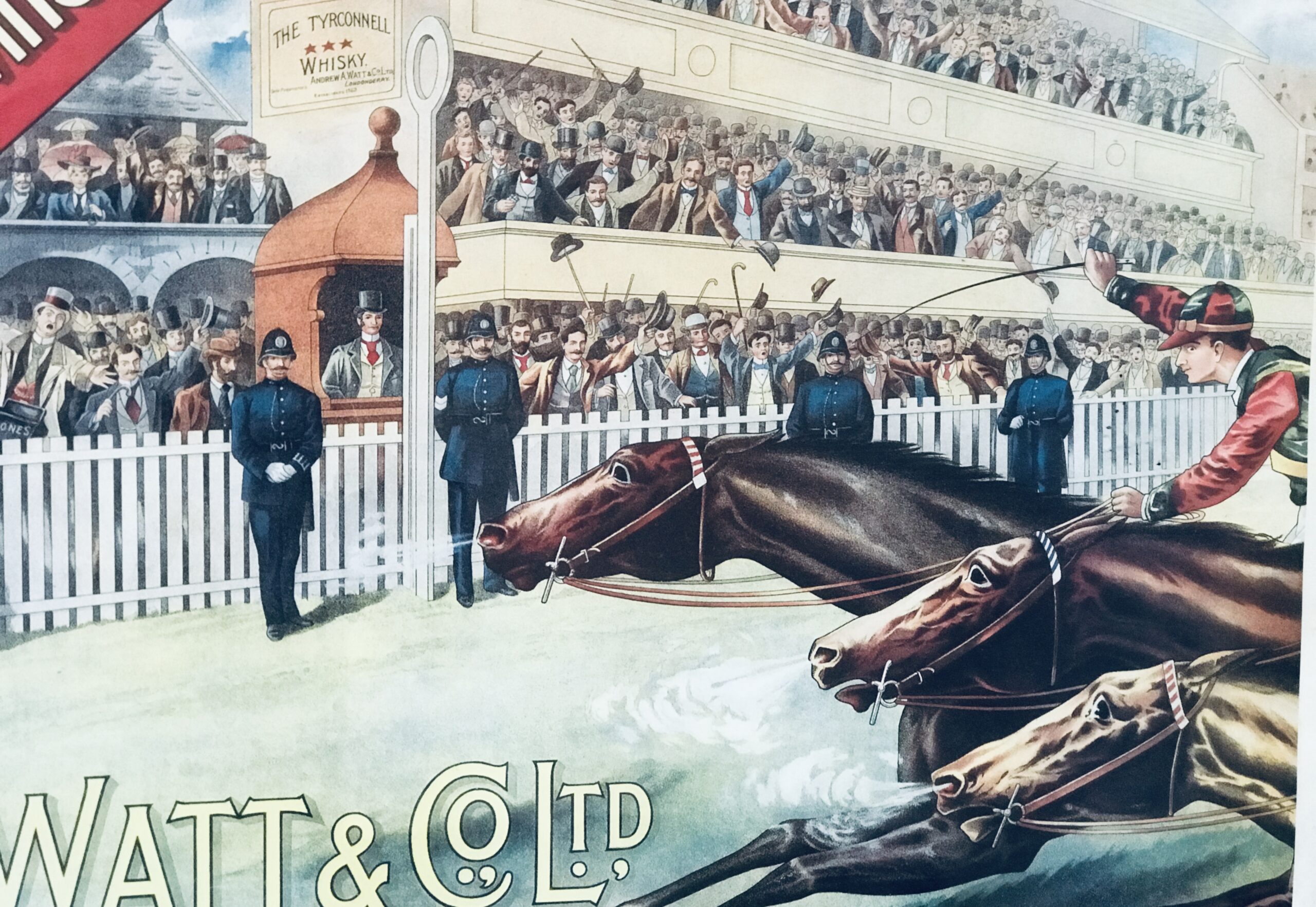 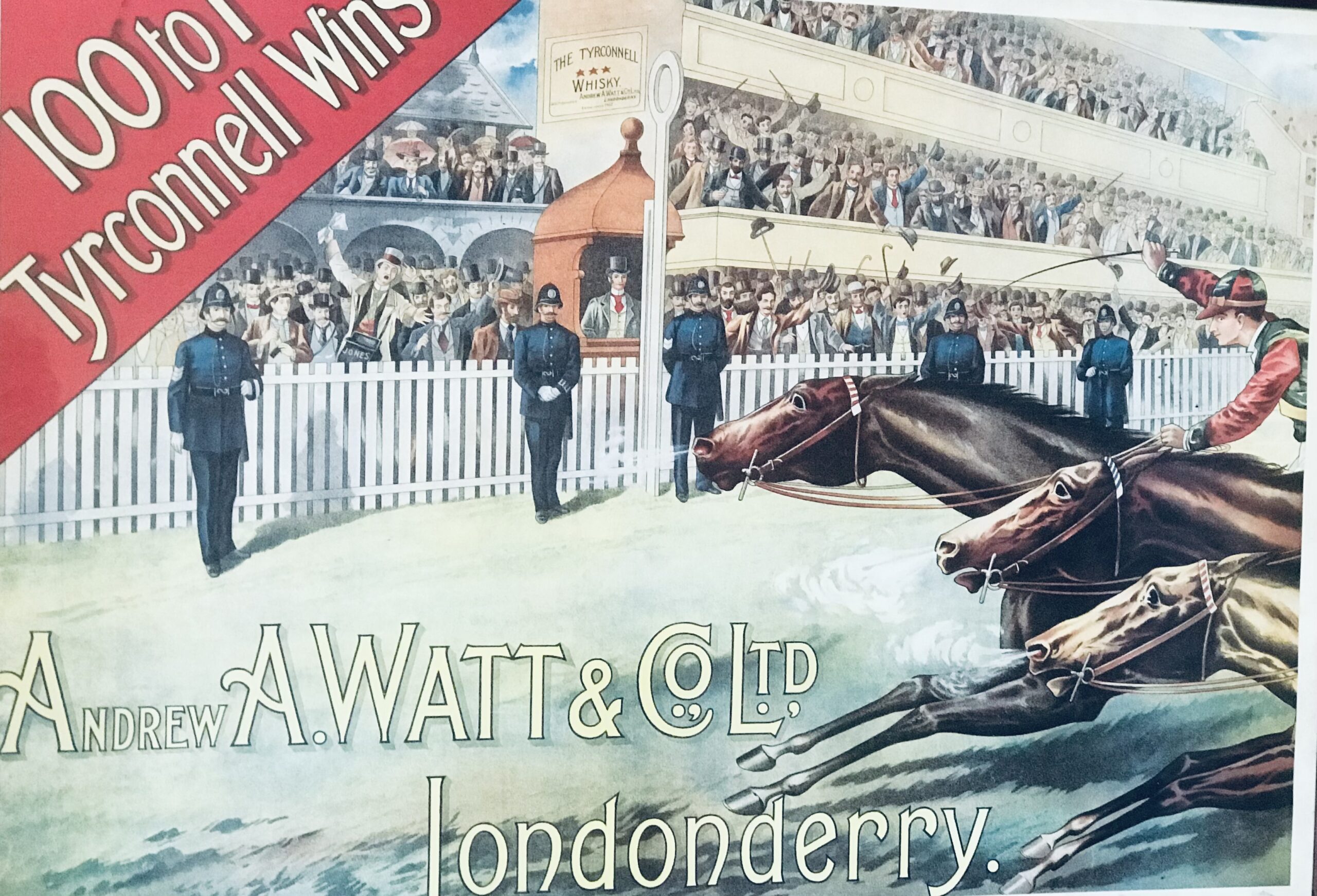 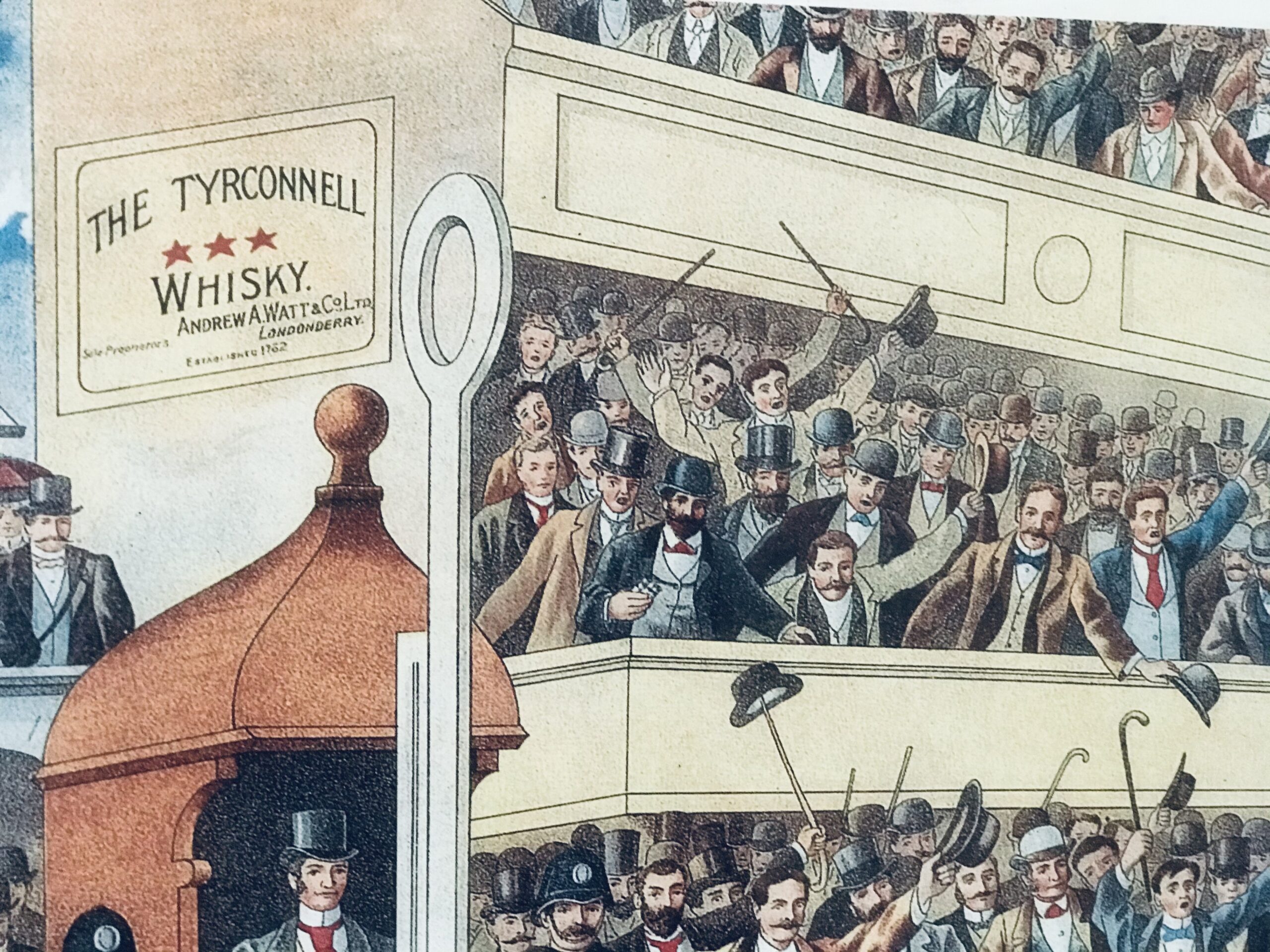