The history of Belfast as a settlement goes back to the Iron Age, but its status as a major urban centre dates to the 18th century. Belfast today is the capital of Northern Ireland. Belfast was throughout its modern history a major commercial and industrial centre, but the late 20th century saw a decline in its traditional industries, particularly shipbuilding. The city’s history has been marked by violent conflict between Catholics and Protestants which has caused many working class areas of the city to be split into Catholic and Protestant areas. In recent years the city has been relatively peaceful and major redevelopment has occurred, especially in the inner city and dock areas.

During the Great Famine, a potato blight that originated in America spread to Europe decimated crops in Ireland. A Belfast newspaper predicted the devastating effect the blight would have on the common people of Ireland, particularly in rural areas. The potato crop in 1845 largely failed all-over Ireland with the exception of the west coast and parts of Ulster. One-third of the crop was inedible and fears that those spuds in storage were contaminated were soon realized. In October 1846, a Belfast journal The Vindicator made an appeal on behalf of the starving, writing that their universal cry was “give us food or we perish”. The publication went on to scold the United Kingdom for not meeting the basic needs of its people. By 1847, the British government were feeding 3 million famine victims a day, though many were still succumbing to disease brought on by starvation. Many of the poor moved eastward from rural areas into Belfast and Dublin, bringing with them famine-related diseases. Dr. Andrew Malcolm, who was working in Belfast at the time, wrote of the influx of the starving into the town, their horrific appearance and the “plague breath” they carried with them. The Belfast Newsletter reported in July 1847 that the town’s hospitals were overflowing and that some of the emaciated were stretched out on the streets, dead or dying. 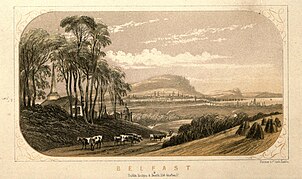 Belfast viewed from the hills in 1852. The new Queen’s Bridge across the Lagan can be seen to the right.

On 10 July 1849, the Belfast Harbour commissioners, members of the council, gentry, merchants and the 13th Regiment officially opened the Victoria Channel aboard the royal steamer Prince of Wales. This new waterway allowed for large vessels to come up the River Lagan regardless of tide level. After a signal was given, a flotilla of sea craft moved up the channel to the adulation of the large crowds that had gathered to watch the event. The spectacle was concluded by a cannon salute and a resounding chorus of “Rule Britannia” by all those present.This new channel fed the growth of Belfast industry enabling new development, despite being completed during the last years of the Great Famine. Queen Victoria and Prince Albert along with the Prince of Wales visited Belfast in August 1849, sailing up Victoria Channel and venturing into the town. They were received jubilantly by the people of Belfast with fanfare and decorations adorning the streets. The Royal Family moved up High Street amidst rapturous cheers and well-wishing. On the same street, a 32-foot high arch had been built with a misspelled rendering of Irish Gaelic greeting “Céad Míle Fáilte” (a thousand welcomes) written on it. In the White Linen Hall, the Queen viewed an exhibition of Belfast’s industrial goods. The Royals would make their way to the Lisburn Road and the Malone Turnpike where Victoria inspected the new Queen’s College (later, University). After touring Mulholland’s Mill, Victoria and her entourage returned to their vessel.

Belfast was recovering from a cholera epidemic at the time of the Royal visit and many credited Victoria and Albert with lifting the spirits of the town during a difficult period.Conditions for the new working class were often squalid, with much of the population packed into overcrowded and unsanitary tenements. The city suffered from repeated cholera outbreaks in the mid-19th century. Though both Catholics and Protestants were often employed, Protestants would experience preferment over their Catholic counterparts. Hardly any of those in management were Catholic and Protestants would often receive promotion and desirable positions. Working class Catholics were the only group on the whole to experience adverse poverty during this period. Though there were Catholics and Protestants at all levels of society, it was often said “there are no Protestants in the slums”. Conditions improved somewhat after a wholesale slum clearance programme in the 1900s.

Belfast was becoming one of the greatest places for trade in the western world. In 1852, Belfast was the first port of Ireland, out pacing Dublin in both size, value and tonnage.[39] However, old sectarian tensions would soon come to the fore resulting in an almost annual cycle of summer rioting between Catholics and Protestants. On 12 July 1857, confrontations between crowds of Catholics and Protestants degraded into throwing stones on Albert Street with Catholics beating two Methodist ministers in the Millfield area with sticks. The next night, Protestants from Sandy Rowwent into Catholic areas, smashed windows and set houses on fire. The unrest turned into ten days of rioting, with many of the police force joining the Protestant side. There were also riots in Derry, Portadown and Lurgan. Firearms were produced with sporadic gunfire happening all over Belfast, the police could do little to mitigate the turmoil. The Riots of 1864 were so intense that reinforcements and two field guns were dispatched from Dublin Castle. A funeral for a victim of police gunfire was turned into a loyalist parade that unexpectedly went up through Donegall Place in the heart of Belfast. Police barely held as a barrier between the Protestants marching through Belfast’s main streets and the irate Catholics who were massing at Castle Place. Continuous gunfire resounded throughout the city until a deluge of summer rain dispersed most of the crowd. 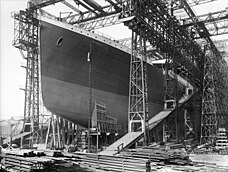 RMS Titanic being prepared for launch from dry-dock at Harland & Wolff in 1911.

The mud that was dredged up to dig the Victoria Channel was made into an artificial island, called Queen’s Island, near east Belfast. Robert Hixon, an engineer from Liverpool who managed the arms work on Cromac Street, decided to use his surplus of iron ore to make ships. Hixon hired Edward Harlandfrom Newcastle-on-Tyne to assist in the endeavour. Harland launched his first ship in October 1855, his cutting-edge designs would go on to revolutionize the ship building world. In 1858, Harland would buy-out Hixon with the backing of Gustav Schwab. Schwab’s nephew, Gustav Wolff had been working as an assistant to Harland. They formed the partnership of Harland & Wolff in 1861. Business was booming with the advent of American Civil War and the Confederacy purchasing steamers from Harland & Wolff. Gustav Schwab would go on to create the White Star Line in 1869, he ordered all of his ocean vessels from Harland & Wolff, setting the firm on the path to becoming the biggest ship building company in the world. Harland & Wolff would go on to build some of the world’s most famous (and infamous) ships including HMHS Britannic, RMS Oceanic, RMS Olympic and, best known of all, the RMS Titanic.

Home Rule and the City Charter 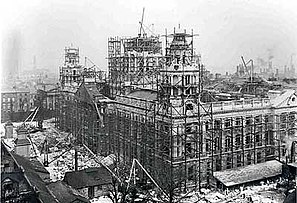 In 1862 George Hamilton Chichester, 3rd Marquess of Donegall (a descendant of the Chichester family) built a new mansion on the slopes of Cavehill above the town. The named as the new Belfast Castle, it was designed by Charles Lanyon and construction was completed in 1870. By 1901, Belfast was the largest city in Ireland. The city’s importance was evidenced by the construction of the lavish City Hall, completed in 1906. As noted, around 1840 its population included many Catholics, who originally settled in the west of city, around the area of today’s Barrack Street which was known as the “Pound Loney”. West Belfast remains the centre of the city’s Catholic population (in contrast with the east of the city which remains predominantly Protestant). Other areas of Catholic settlement have included parts of the north of the city, especially Ardoyne and the Antrim Road, the Markets area immediately to the south of the city centre, and the Short Strand (a Catholic enclave in east Belfast). During the summer of 1872, about 30,000 Nationalists held a demonstration at Hannahstown in Belfast, campaigning for the release of Fenian prisoners, which lead to another series of riots between Catholics and Protestants. In 1874, the issue of Home Rule became mainstream in Irish politics, A conglomeration of MP’s were denounced by the Belfast Newsletter on the eve of election, writing that “Home Rule was simply ‘Rome Rule'” and that Protestants would not support a new Dublin parliament. In June 1886, Protestants celebrated the defeat of the First Home Rule Bill in the House of Commons, leading to rioting on the streets of Belfast and the deaths of seven people, with many more injured. In the same year, following The Twelfth Orange Institution parades, clashes took place between Catholics and Protestants, and also between Loyalists and police. Thirteen people were killed in a weekend of serious rioting which continued sporadically until mid-September with an official death toll of 31 people.

Although the county borough of Belfast was created when it was granted city status by Queen Victoria in 1888,[42] the city continues to be viewed as straddling County Antrim and County Down with the River Lagan generally being seen as the line of demarcation.Charles Vane-Tempest-Stewart made a grand visit to Belfast on behalf of the Queen to give it official recognition as a city. Belfast at this time was Ireland’s largest city and the third most important port (behind London and Liverpool) in the United Kingdom; the leader in world trade at the time.Belfast had become a world class industrial city and the center of linen production for the whole planet. In 1896, a Second Home Rule Bill passed through the House of Commons but was struck down in the House of Lords. Wary Protestants celebrated and, as had happened 7 years earlier, Catholics took exception to Protestant triumphalism and rioted.

On 14 January 1899, large crowds gathered to watch the launch of the RMS Oceanic which had been ordered by the White Star Line for the trans-Atlantic passenger travel. The Oceanic was the largest man-made moving object that had ever been built up to that time. By the year 1900, Belfast had the world’s largest tobacco factory, tea machinery and fan-making works, handkerchief factory, dry dock and color Christmascard printers. Belfast was also the world’s leading manufacturer of “fizzy drinks” (soft drinks). Belfast was by far the greatest economic beneficiary in Ireland of the Act of Union and Industrial Revolution. The city saw a bitter strike by dock workers organised by radical trade unionist Jim Larkin, in 1907. The dispute saw 10,000 workers on strike and a mutiny by the police, who refused to disperse the striker’s pickets. Eventually the Army had to be deployed to restore order. The strike was a rare instance of non-sectarian mobilisation in Ulster at the time. 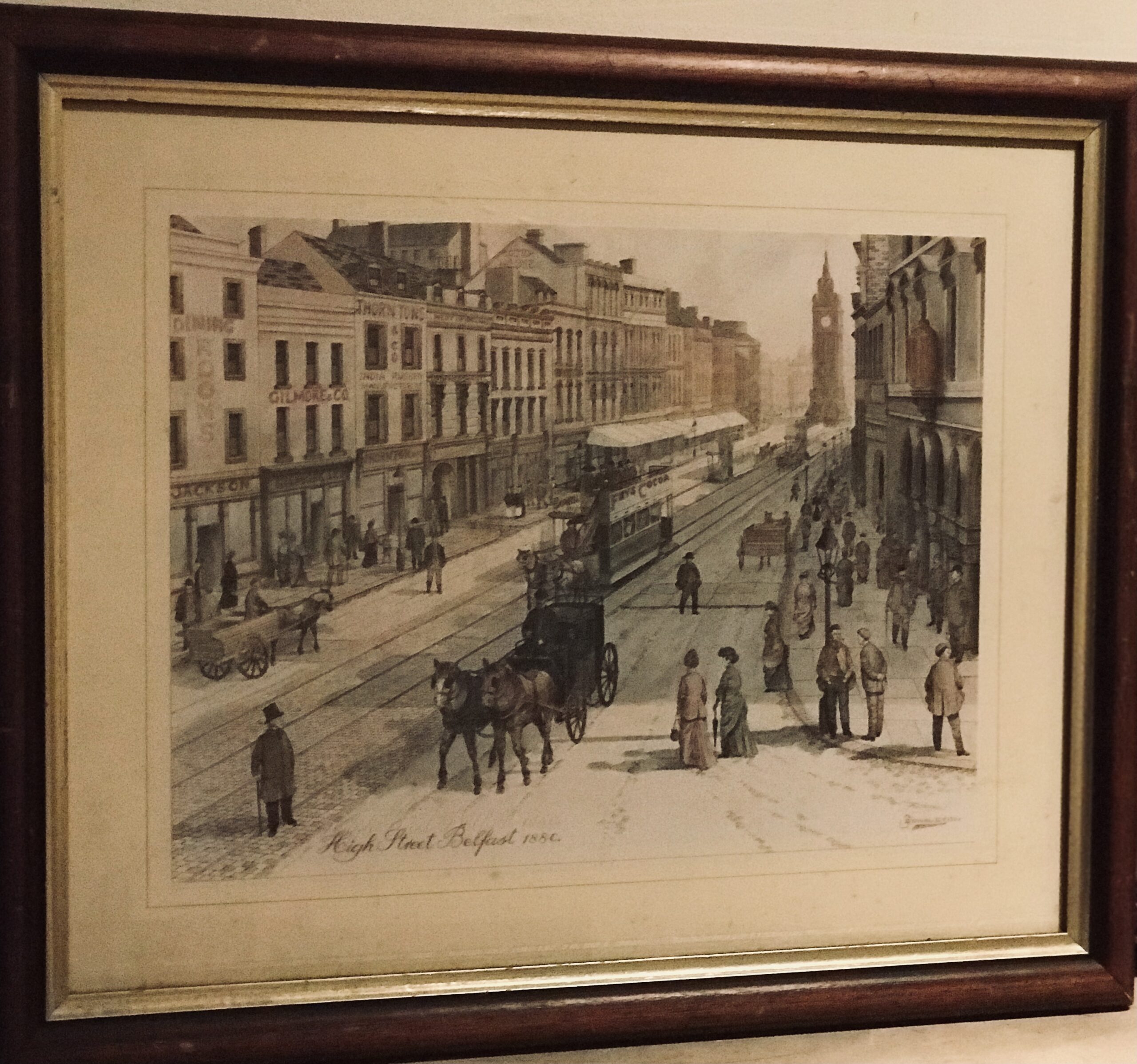 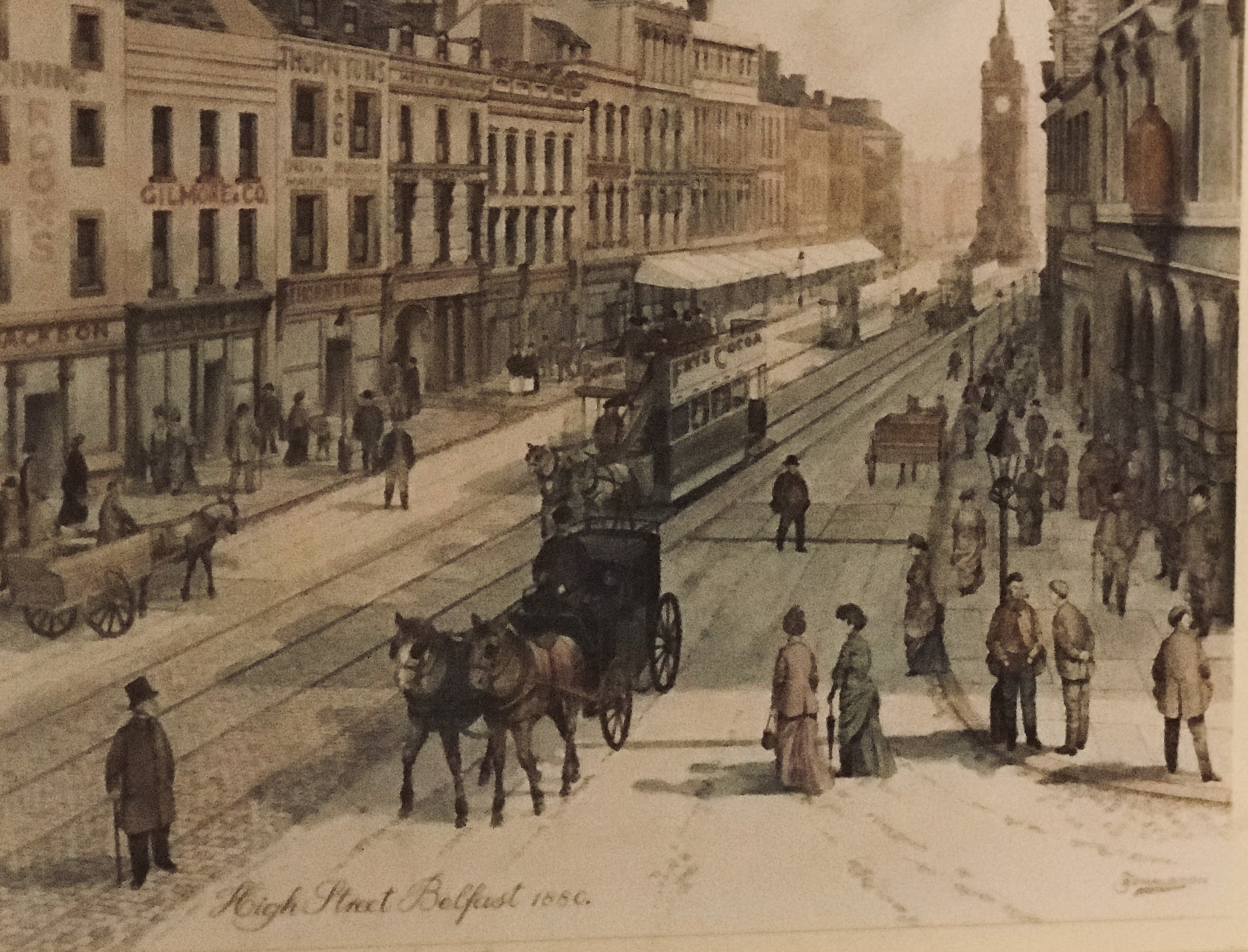 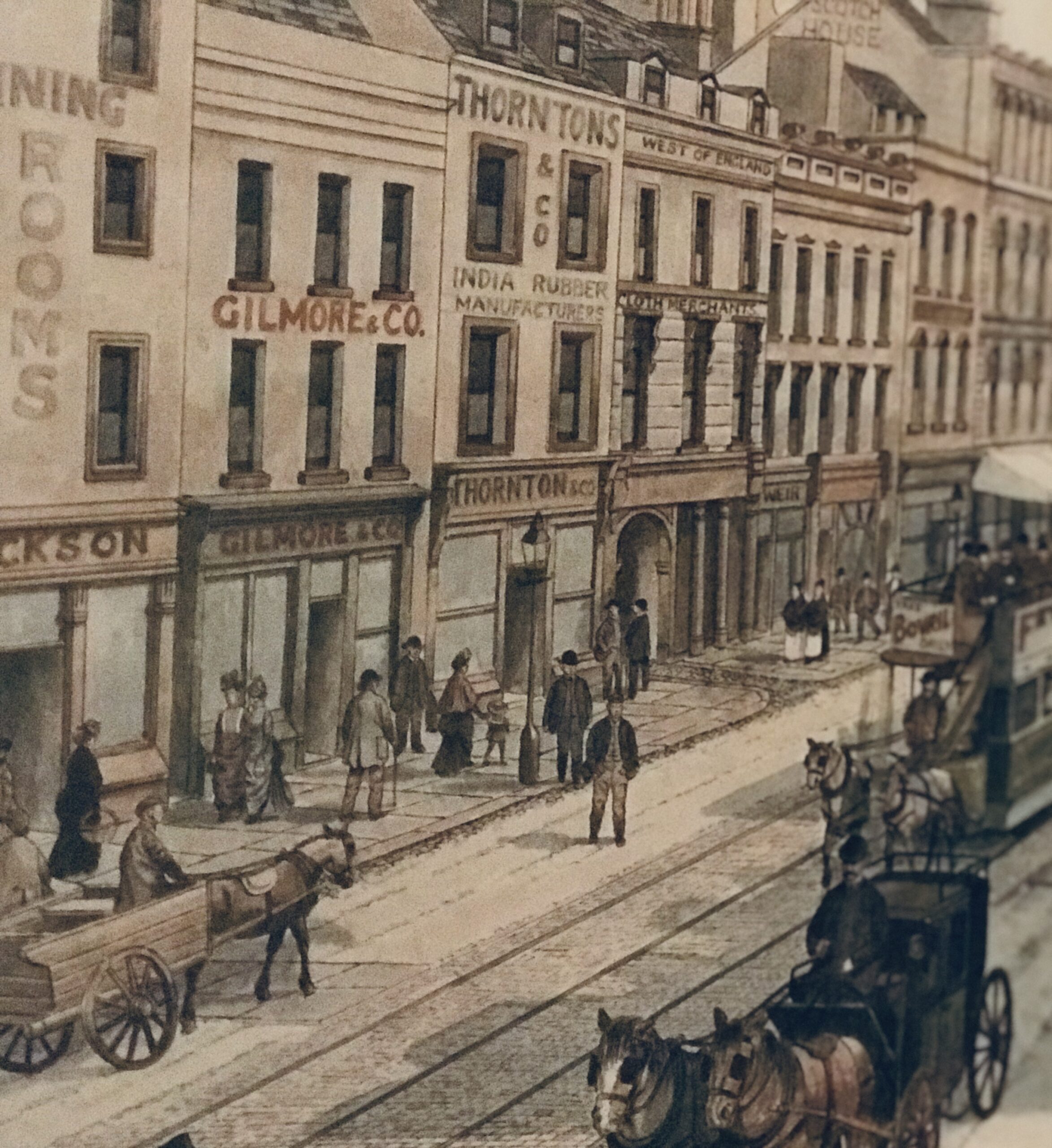 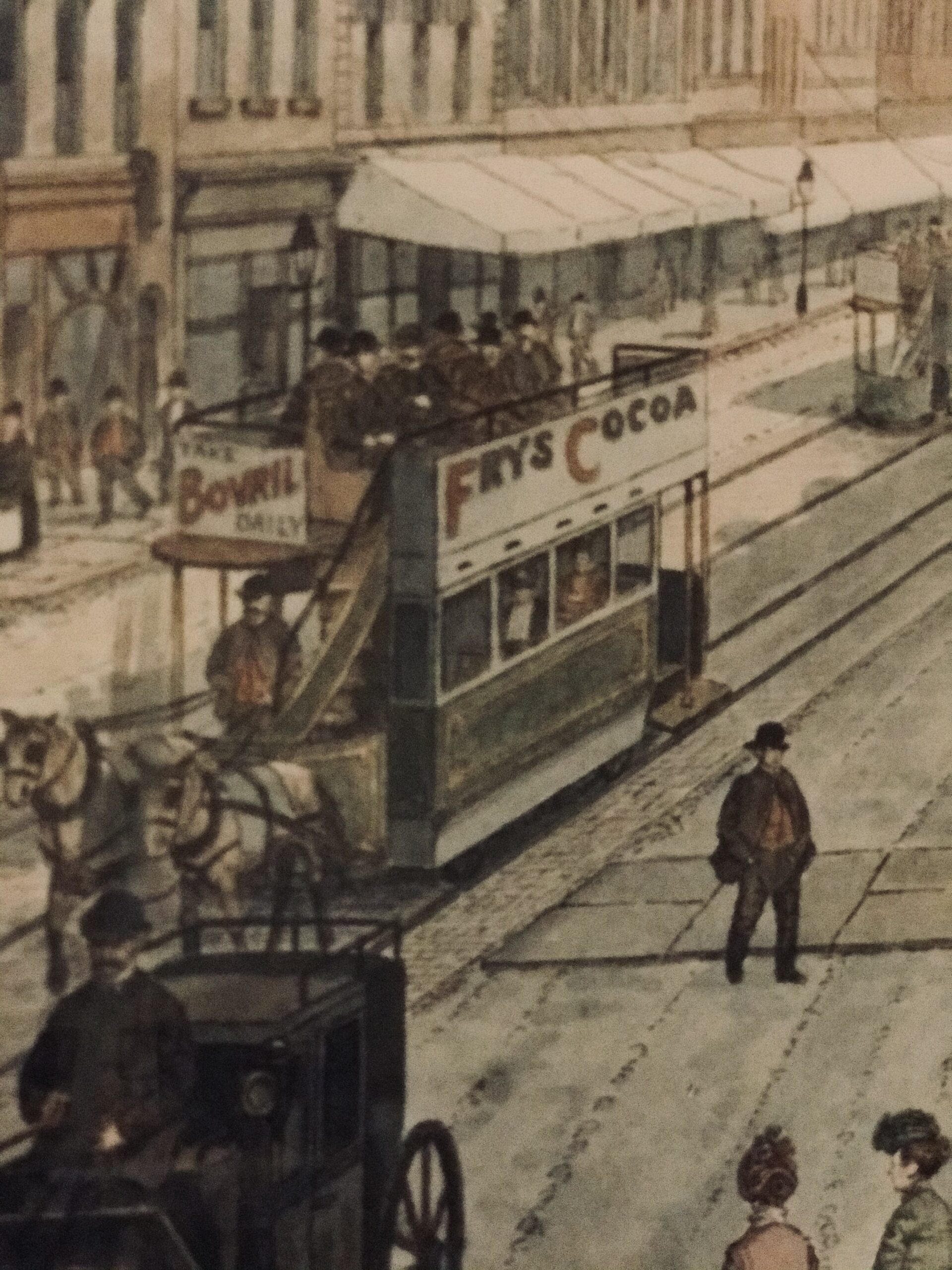 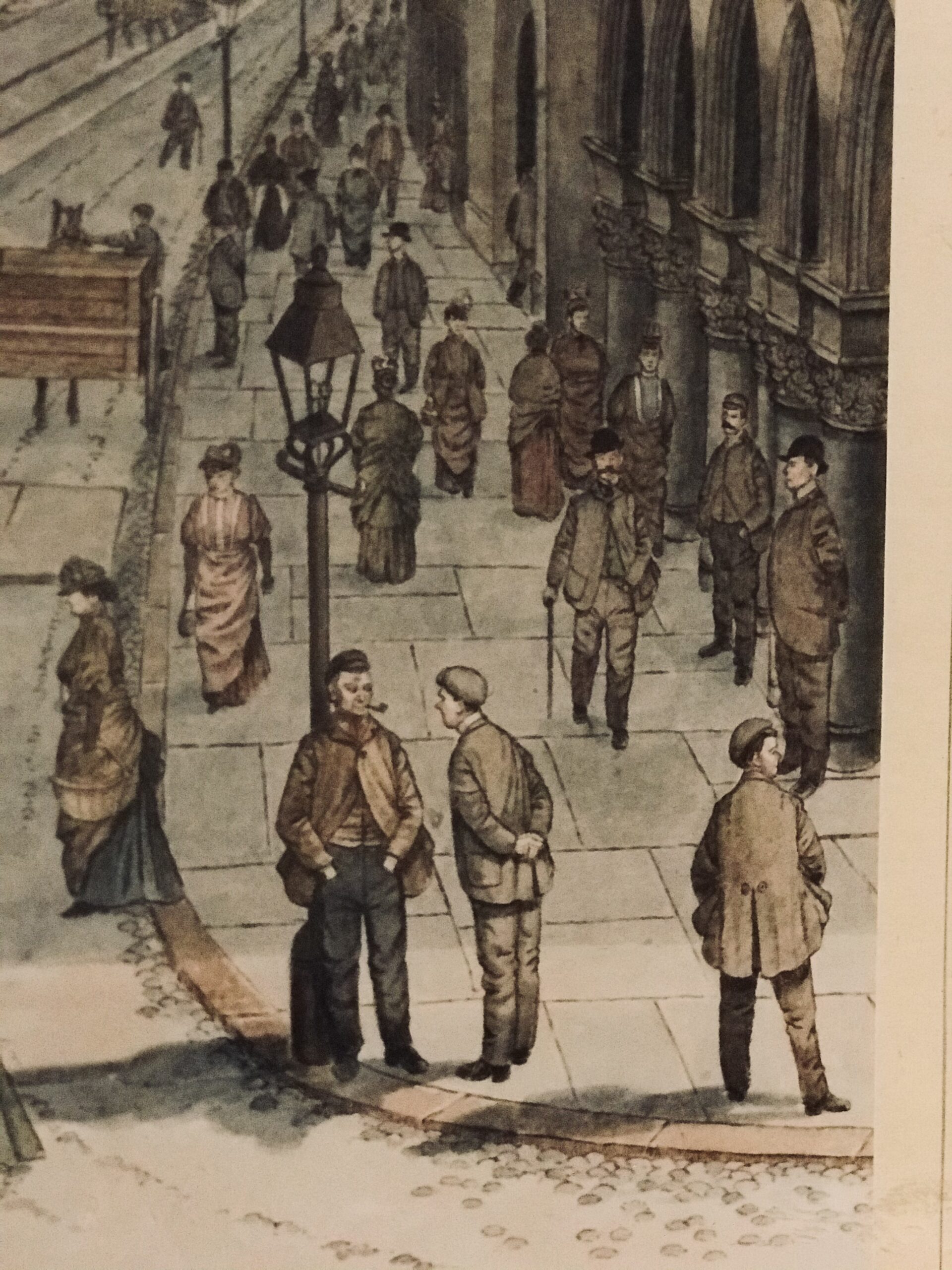