“The Washington Bar, more commonly known as Gene Mackin’s, was situated next door to a newspaper shop on the Falls Road opposite the Dunville Park in West Belfast. The Munster and Leinster Bank was close by. Gene and his sister Margaret were the proprietors of the bar and shop respectively. They lived on the premises and were highly thought of by their customers and the local community in general.

The bar was a dark old fashioned male dominated establishment, women were not encouraged and there were no female toilet facilities anyway. Both Gene Mackin and Bobby his main barman in the early sixties were adept at sign language and this encouraged a wide spread of customers from all parts of the road.

The bar was bombed in the early years of the troubles and the Mackins moved to the suburbs and slowly faded away from public life.

At the start of the Swinging Sixties Gene Mackin’s Washington bar was most likely to have been the very last watering hole on the Falls Road that bottled their own Guinness.

In a shed in the backyard of the bar the two day process began with the washing of the hundreds of bottles that had been carefully stacked in a very large metal tub over the previous weeks. Cold tap water was used but occasionally if the weather warranted a kettle of boiling water as added. The soaking allowed the old labels to be easily removed as a simple flour and water paste had been the original adhesive. A bottle washing brush with stiff bristles was the only tool required and the bar had an adequate supply of those. The washed bottles were left to drain upside down on a wooden board in which holes had been bored to accommodate the bottle neck. When dry they were placed on large wooden trays in readiness for the next day.

The Guinness came in a large metal barrel or firkin. A tap had to be inserted into the bung hole to allow for the pouring of the liquid and this was always challenging as it was quite possible to get a soaking if it wasn’t processed correctly. It was usually accomplished with a degree of dexterity and of course judicial force. The weight of the barrel meant that it couldn’t be raised to an ideal working height so the bottler had to sit on a small stool. With practice the filling of the bottles was fast and rote; the tap was left open and using two hands, one for the empty bottle to fill and the other to carefully place the filled bottle on the large tray.

The bottle caps were the classic tin top of metal with a cork cushion and were put on using a press made especially for this task. A magnet held the top in place over the bottle and a lever was pulled forcing the cap onto the neck and thus sealing the bottle and it’s precious contents. Care had to be taken doing this because too heavy a hand could easily result in the bottle shattering.

All that now remained was the sticking on of the labels which told of the bottle contents and the name of the bar. Using a paste of flour and water and with a little practice this was accomplished quite easily. After a few days settling the new bottles of Guinness were brought into the bar to be sold.” 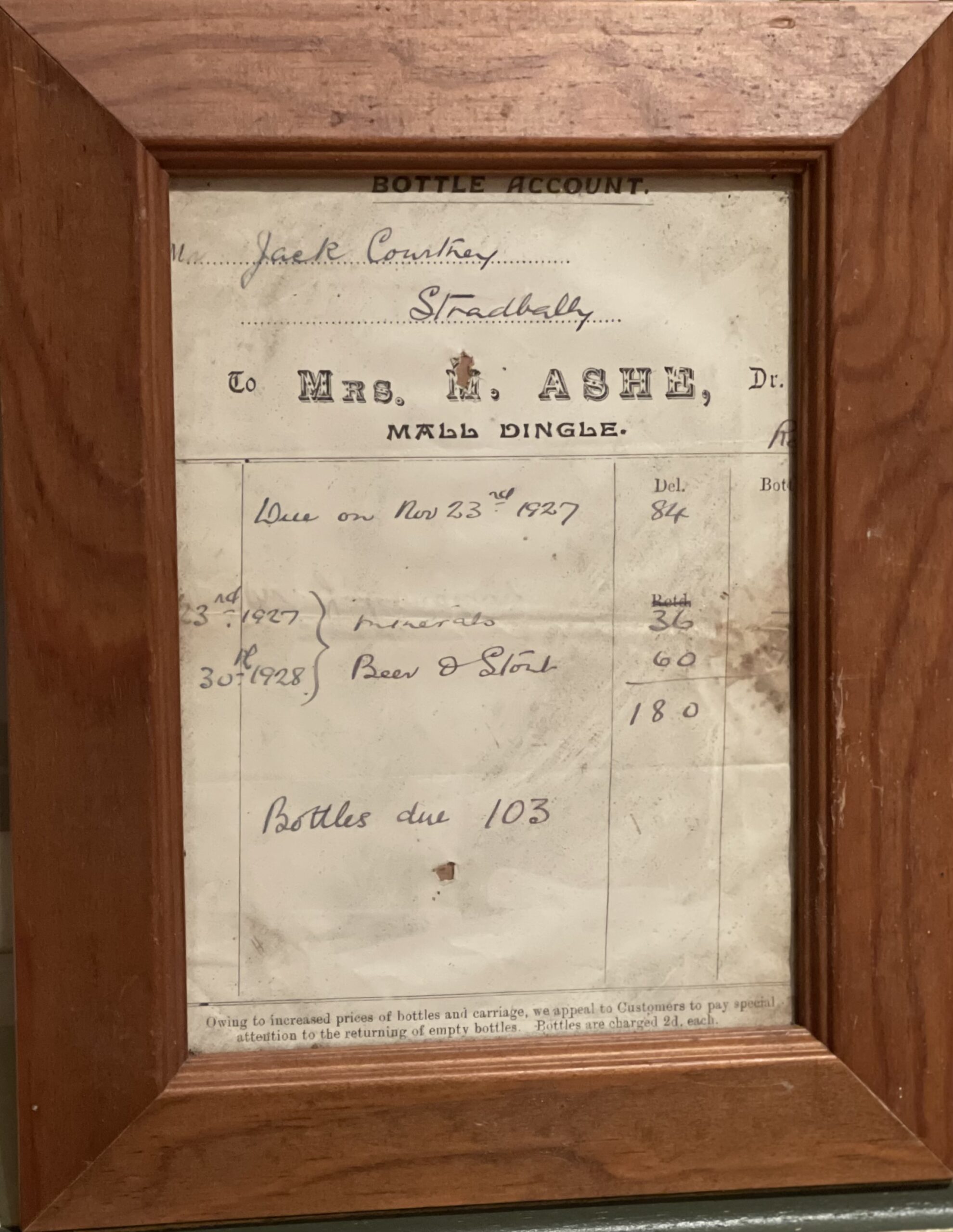 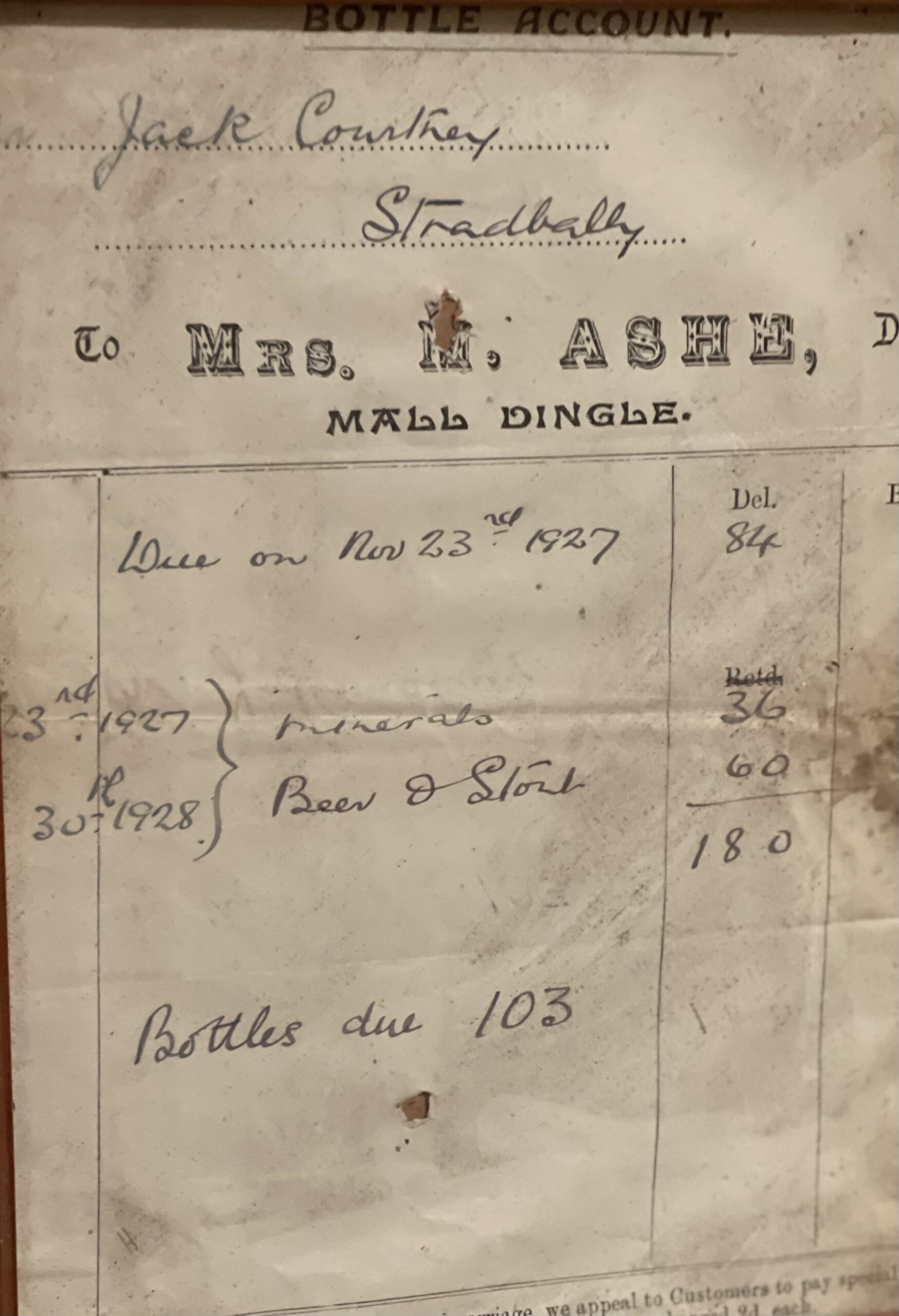 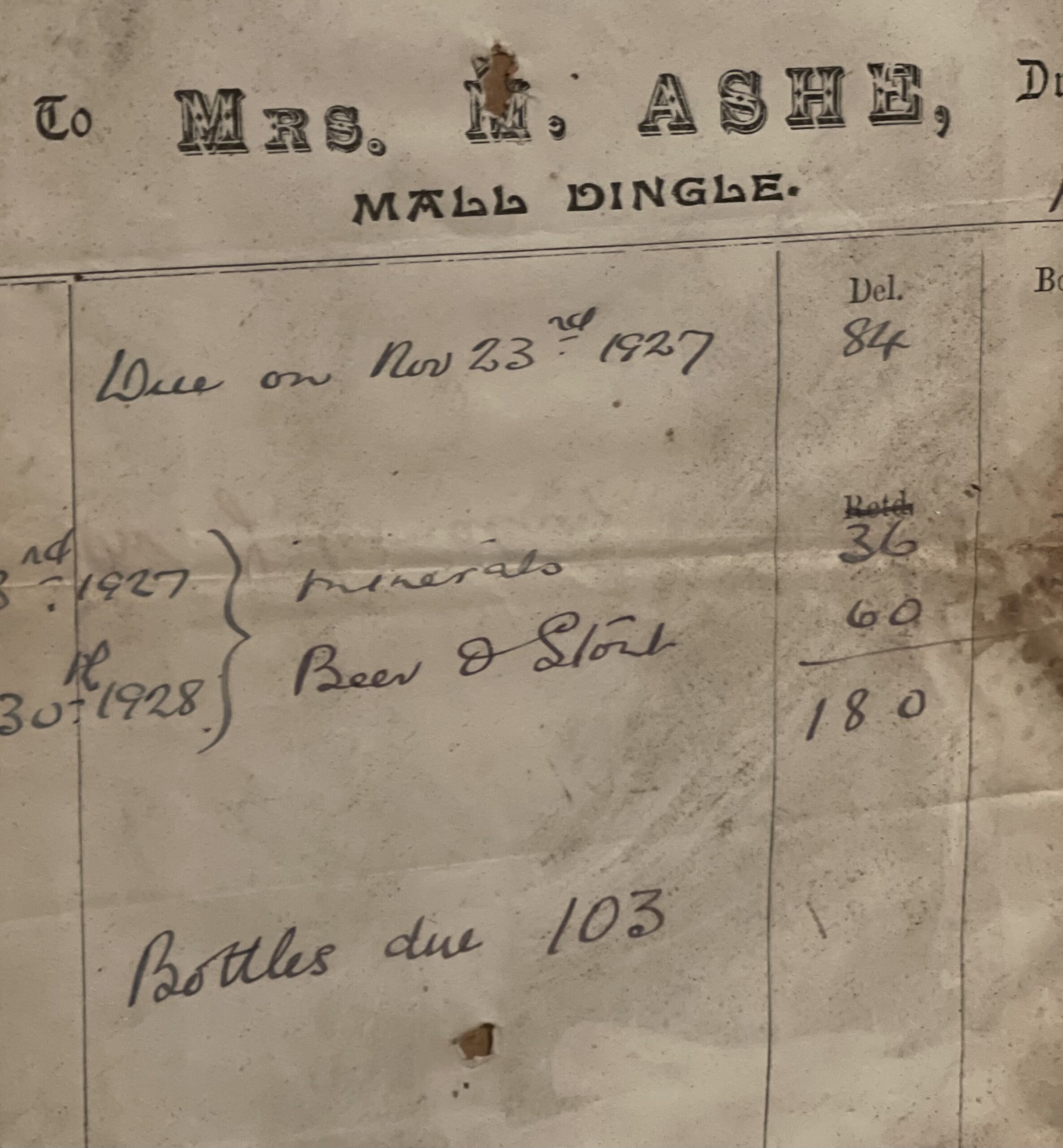 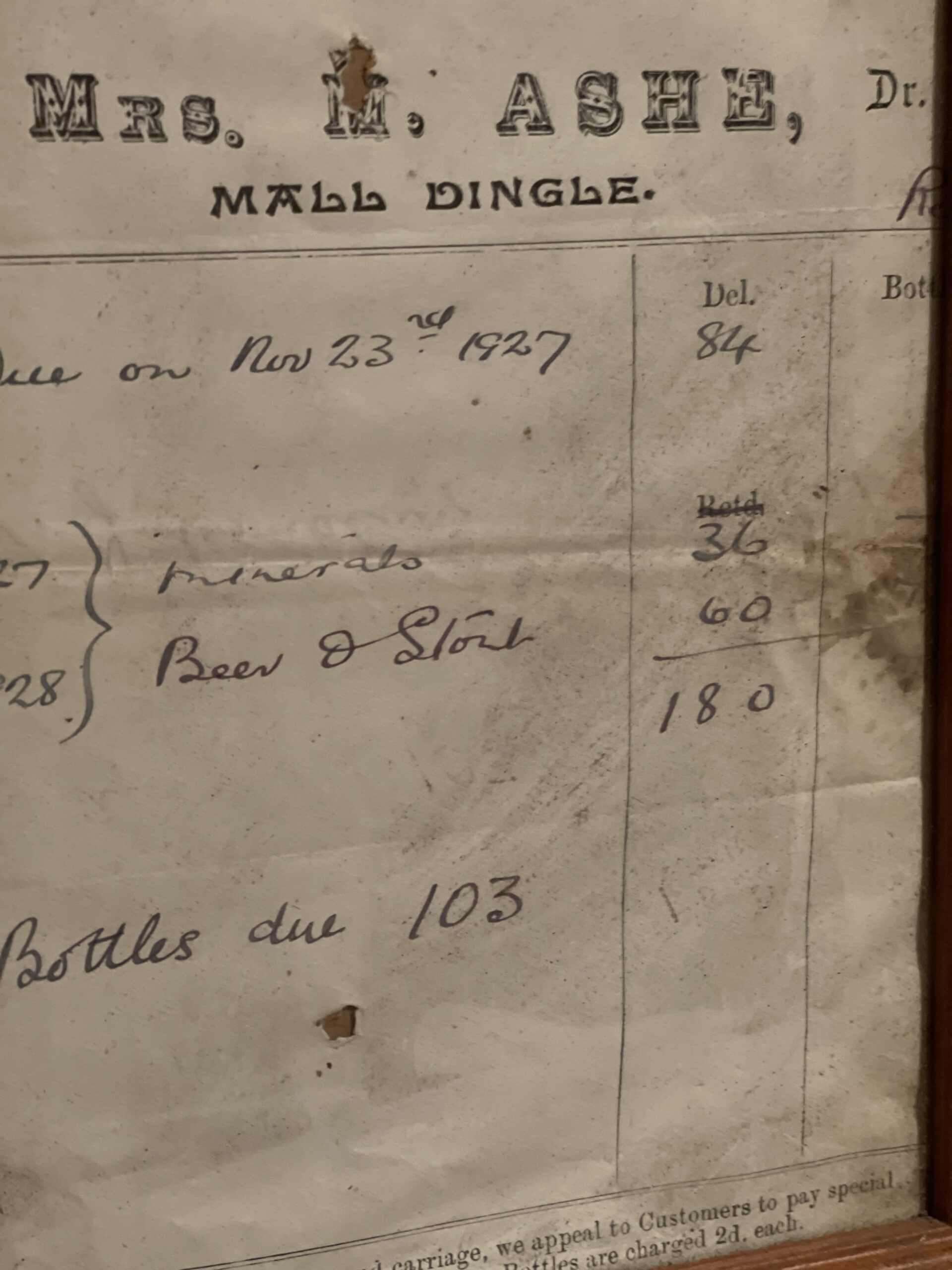 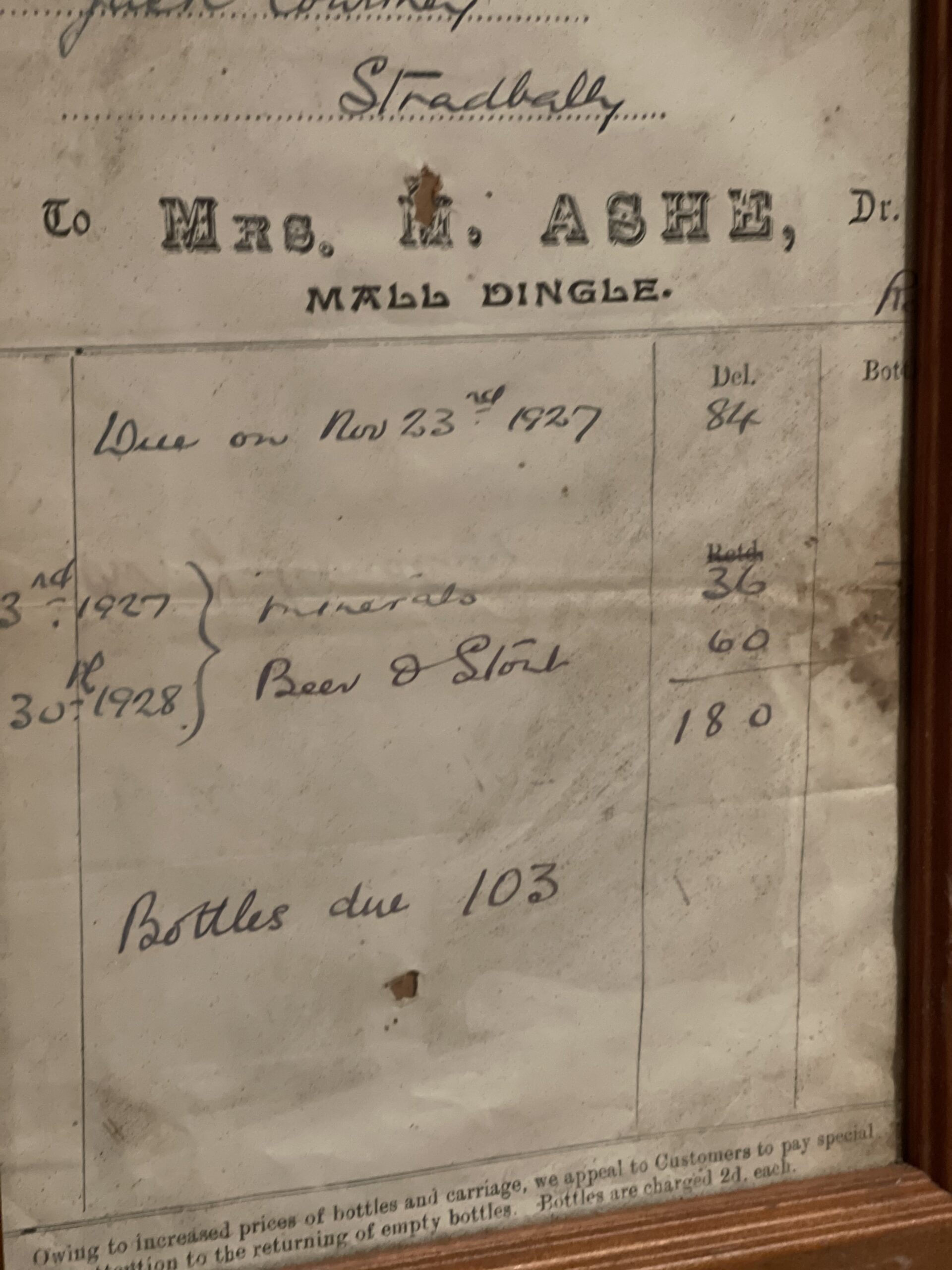