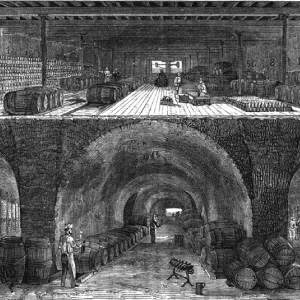 The Kinahans brand was founded on Trinity Street, Dublin in 1779 by Daniel Kinahan, who set out to do things differently. The brand began its epic saga, a journey through time and an odyssey across generations. 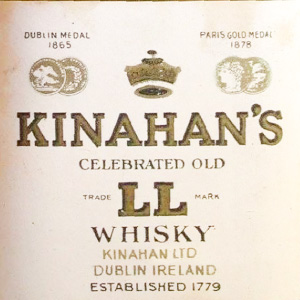 It is fascinating to think that today’s rich, deeply complex and flavoursome glass of matured whiskey, originally was made and consumed completely differently. Known as moonshine (or Poitin) today, the original whiskey was a mere distillate, which was consumed as a raw colourless spirit with little character and a very rough taste. Maturation was not part of whiskey making process, let alone being as fundamental as it is today. The wooden casks, widely used for maturation today, originally had nothing to do with whiskey-making and have been invented and used for storage and transportation of all kinds of goods including metals and gold.

With dozens of small and large factories distilling and selling whiskey on the Isle of Ireland at the time, Kinahans believed in a different kind of future for what whiskey should be.

In 1980 Kinahans acquired impressive Vaults at Hamilton Row, Dublin, to enable it to store casks and mature whiskey. Built to the rear of No.11 Merrion Square, the Vaults became the epicentre of whiskey maturation, with Kinahans becoming one of the first whiskey brands to make and export only matured whiskeys. 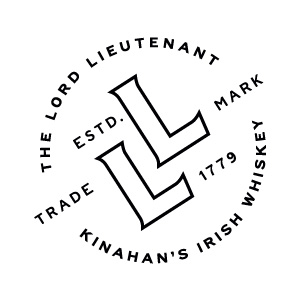 With a history dating back more than 239 years it is inevitable that many myths and legends about Kinahans whiskey steeped into storytelling. But the origins of the L.L. mark have been well documented.

In 1807, the Lord Lieutenant of Ireland (the head of state), Charles Lennox, was so impressed with the whiskeys made by Kinahans that he ordered all stocks at the Kinahans Dublin vaults to be taken exclusively for his private use, marking each cask with “L.L.”. The news, which were highly advertised, led to Kinahans becoming one of the most sought after whiskeys both, domestically and in neighbouring countries. 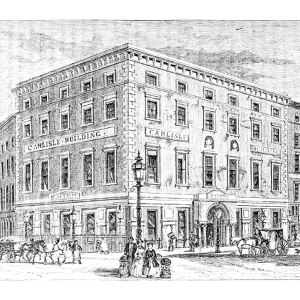 In 1819, the popularity of the Kinahans brand allowed to set up its own four story headquarters, at the corner of Burgh Quay and D’Olier Street, Dublin, Named the Carlisle Building, to resonate with nearby Carlisle Bridge, the premises were built as part of the re-development of the city being overseen by the city’s Wide Street Commissioners.

By the middle of 20th Century the historic building has been taken down. 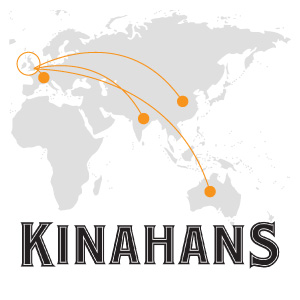 As Kinahans popularity grew, London became a natural base for the company in 1800s wishing to expand into international markets. On 31 December 1841, Kinahans appointed Mr. George Smyth as its first agent in the city of London, with an address at no.1 White Hart Court, London, UK.

For over half a century the company’s London base has formed the centre of a great volume of export trade to the Continent, China, India, Australia and all the foreign markets. 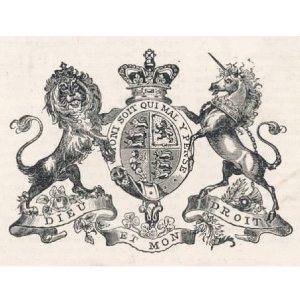 Throughout 1800s Kinahans continued to offer the highest level of differentiated taste and craftsmanship, for which Queen Victoria awarded it a Royal Warrant in 1845. With major accolades in hand, the recruitment of the agents and retail outlets continued.

The Preferred Whiskey Of Jerry Thomas

With popularity in the British Isles, by the middle of 19th century Kinahans whiskey came to be the notice of many American authors and connoisseurs. In 1860s Kinahans came to the attention of the legendary Jerry Thomas.

Also known as “the father of American mixology”, Jerry Thomas was a revolutionary character, who due to his creativity and showmanship transformed the image of the bartender as a creative professional. In his 1862 “Guide on How to Mix Drinks”, Jerry Thomas featured Kinahans in one of his book’s recipes.

The Bartender’s “Guide on How to Mix Drinks” was the first drinks and mixology book ever published in the United States and can be counted amongst very few most influential drinks publications to date. 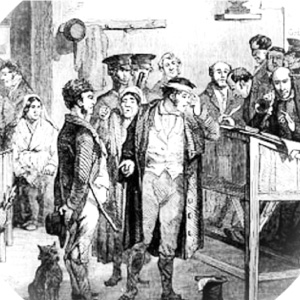 Since its rise to popularity Kinahans faced hazardous times. Because of the brand’s accolades, unscrupulous merchants publicans and others were restless in using the Kinahans bottles, labels and brand marks in order to sell their own products.

In 1863, the activities of William Bolton, a grocer in Dublin’s Westmoreland Street, led to the final and landmark case of legal redress. In the Irish case of Kinahan v. Bolton, the Irish Courts granted an injunction to restrain others from invading the Kinahans L.L. mark. 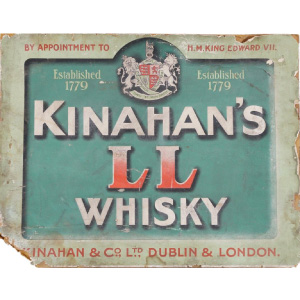 The terms “Kinahans” and “Kinahans L.L.” is by 1881 a household name, becoming widely accepted as shorthand for a whisky of a specific price, quality and reputation. Confirmation for this is found in the 1881 Edition of Brewer’s Dictionary of Phrases and Fables, in which the origin of L.L. trademark is also described. It is against this background that familiarity with the Kinahans brand name found expression in books written by countless British and American authors.

Decline Of The Irish Whiskey Industry 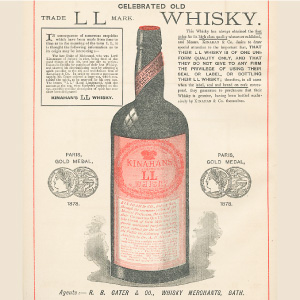 The new century began favourably. However, nothing could shield the company from the tribulations that were about to unfold. One of the key family members, George Kinahan died in 1903 and with him ended the family’s long association with Dublin civic life as well as the prestige and opportunities which would have created. As the longest serving director, he took with him an intimate knowledge of the company’s history as well as a wealth of practical business experience. Additionally, his long directorship at the Bank of Ireland would also have been of great practical value, not least because at various times his fellow directors at the bank included senior members of the Jameson whiskey family. On top of the departure of George Kinahan, the company had to cope with changing and more difficult economy in Ireland. Overall Irish whiskey exports declined spectacularly between 1900 and 1914. In Ireland itself both consumption and production fell, aided by increase of almost a third in spirit duty, as proposed by Lloyd George in his 1909 budget.

Transfer Of The Brand 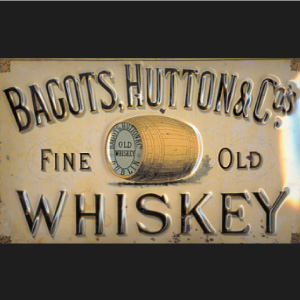 In June 1911 Kinahans business operations were being transferred to Bagot & Hutton, another long established Dublin wine and spirit enterprise. This company bottled and distributed Kinahans L.L. whiskey up until the time of Prohibition in the United States in 1920. 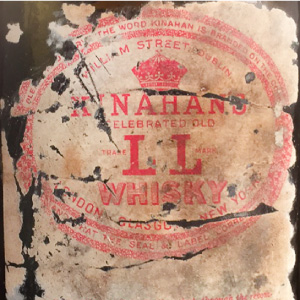 In November 1920, following the Prohibition in the United States, an economic decline and a forthcoming Civil War in Ireland, the two spirit houses combined and were registered as Bagot Hutton & Kinahan. This arrangement continued until October 1988, when the shareholders decided to take a long break for one of Dublin’s most prominent business houses, until better times.

The Renaissance Of The Original Pioneers 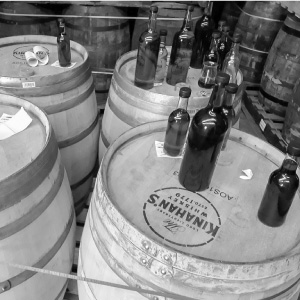 Today Kinahans is enjoying an overdue renaissance. Currently operating from a number of production locations across Ireland. 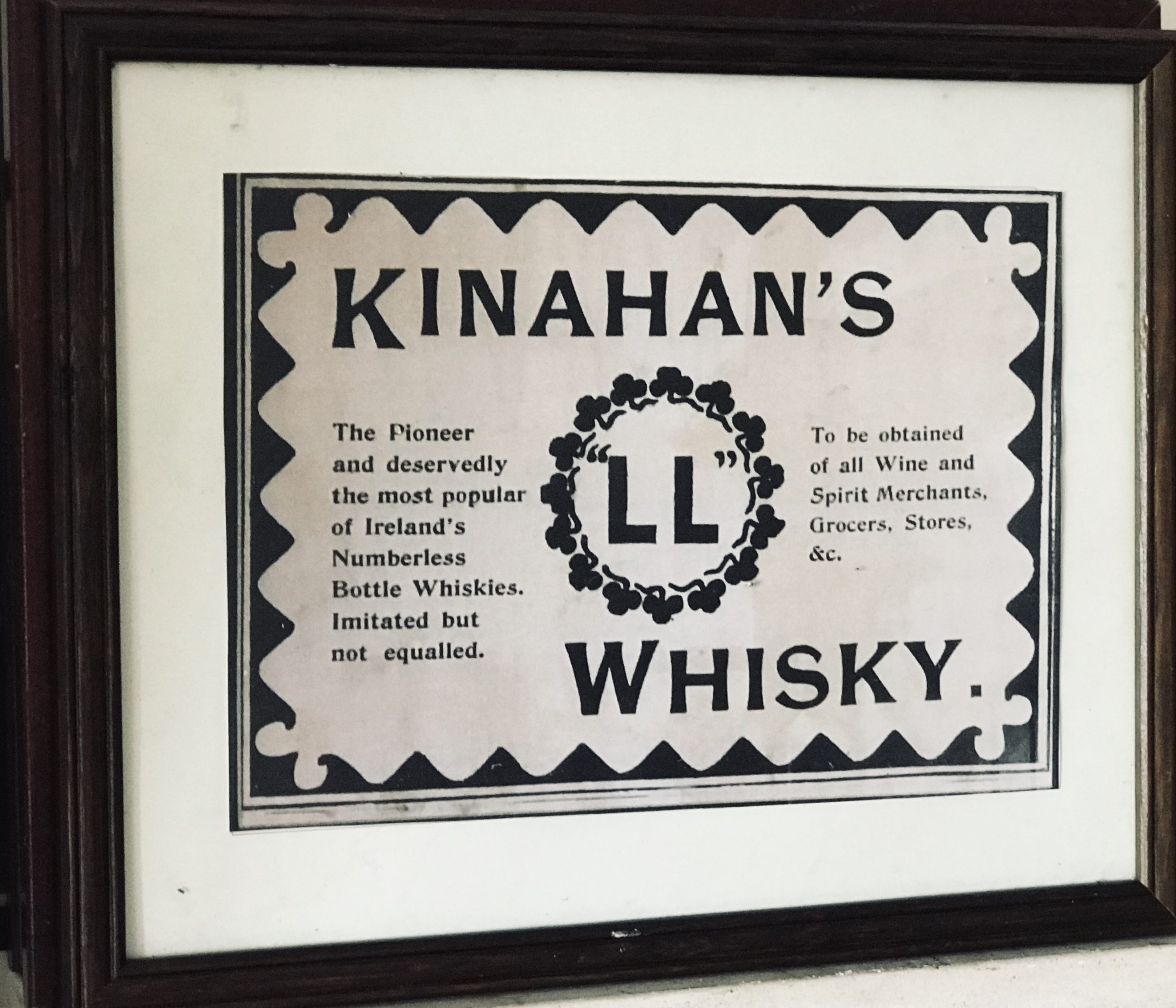 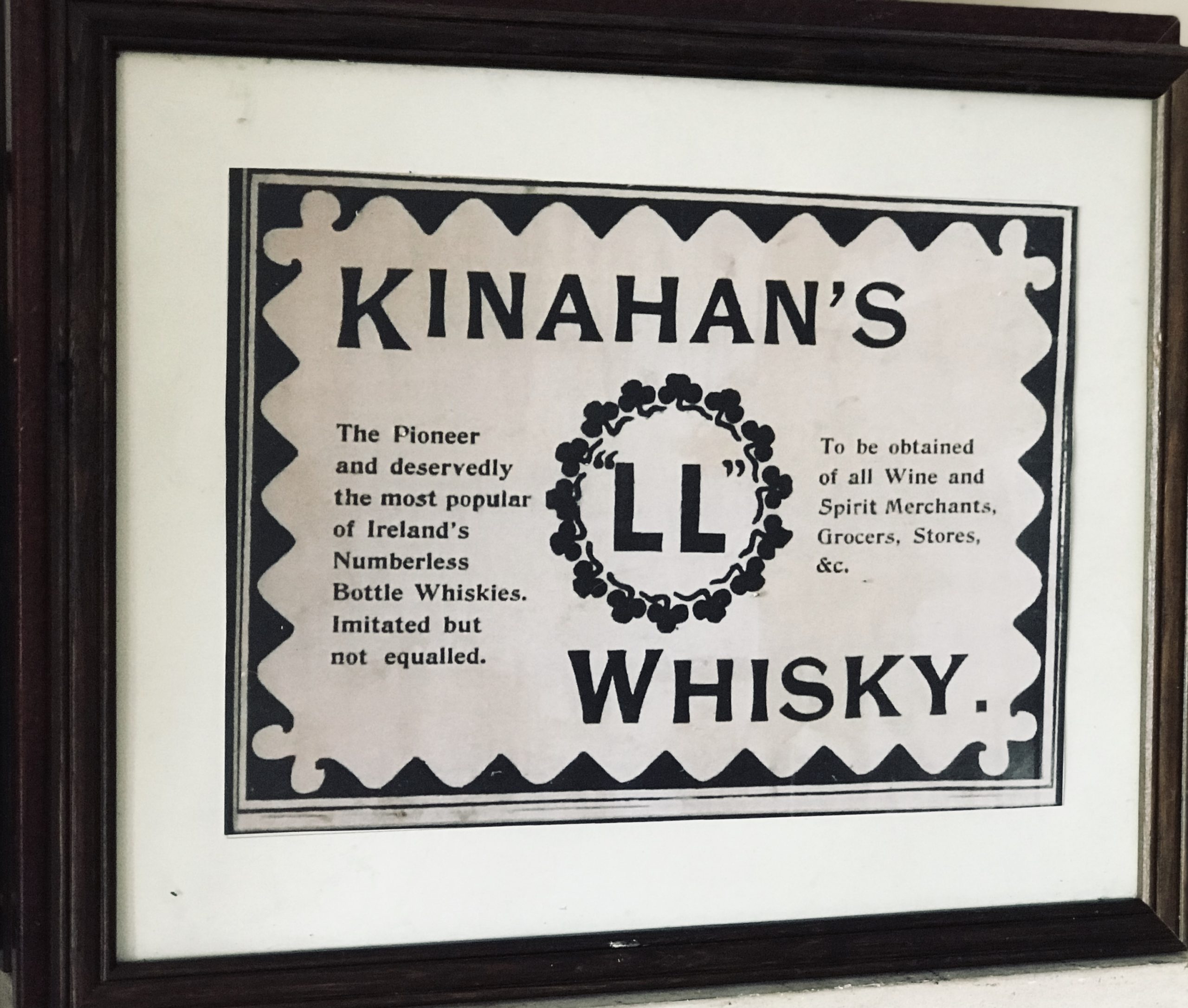 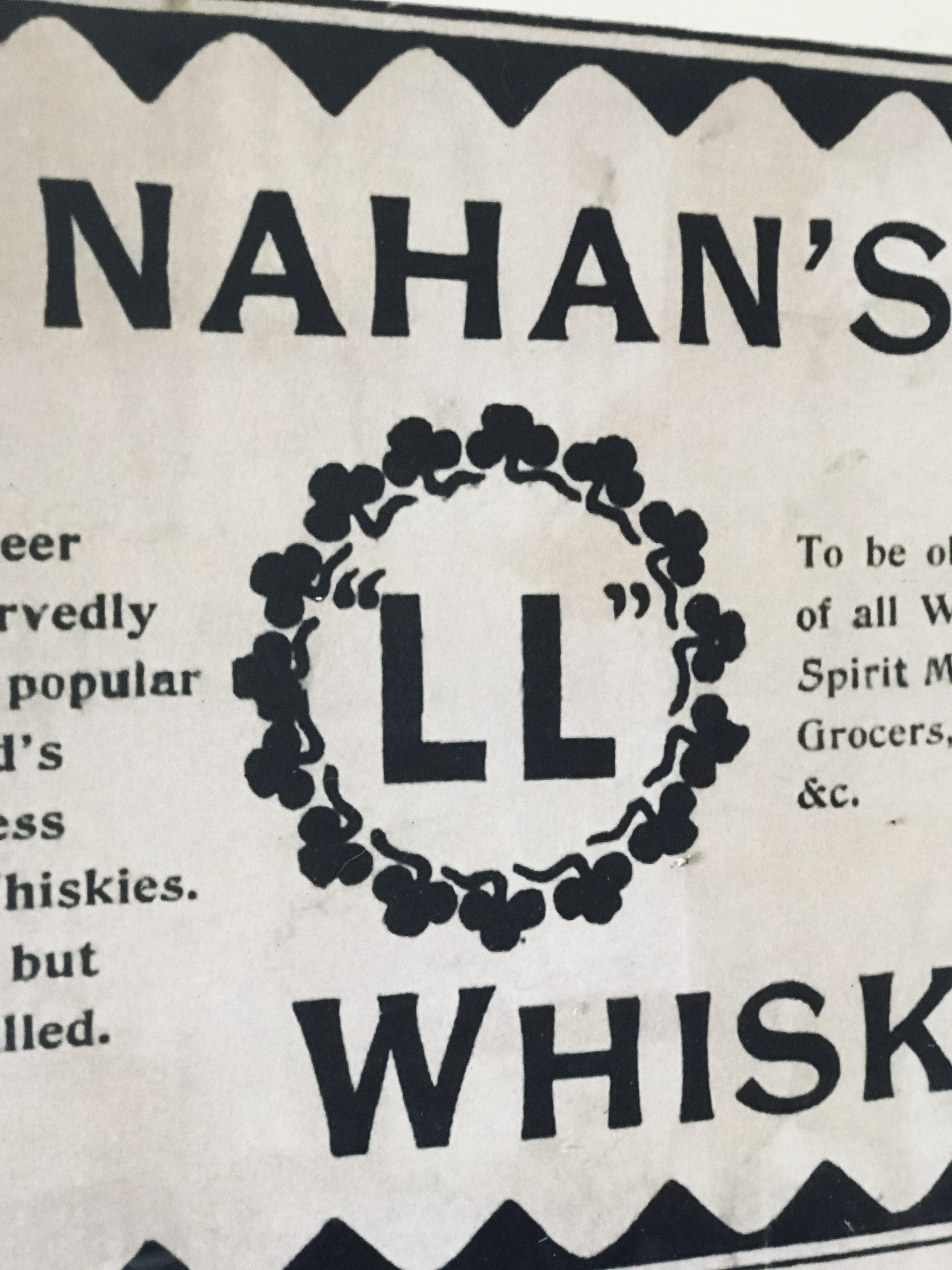 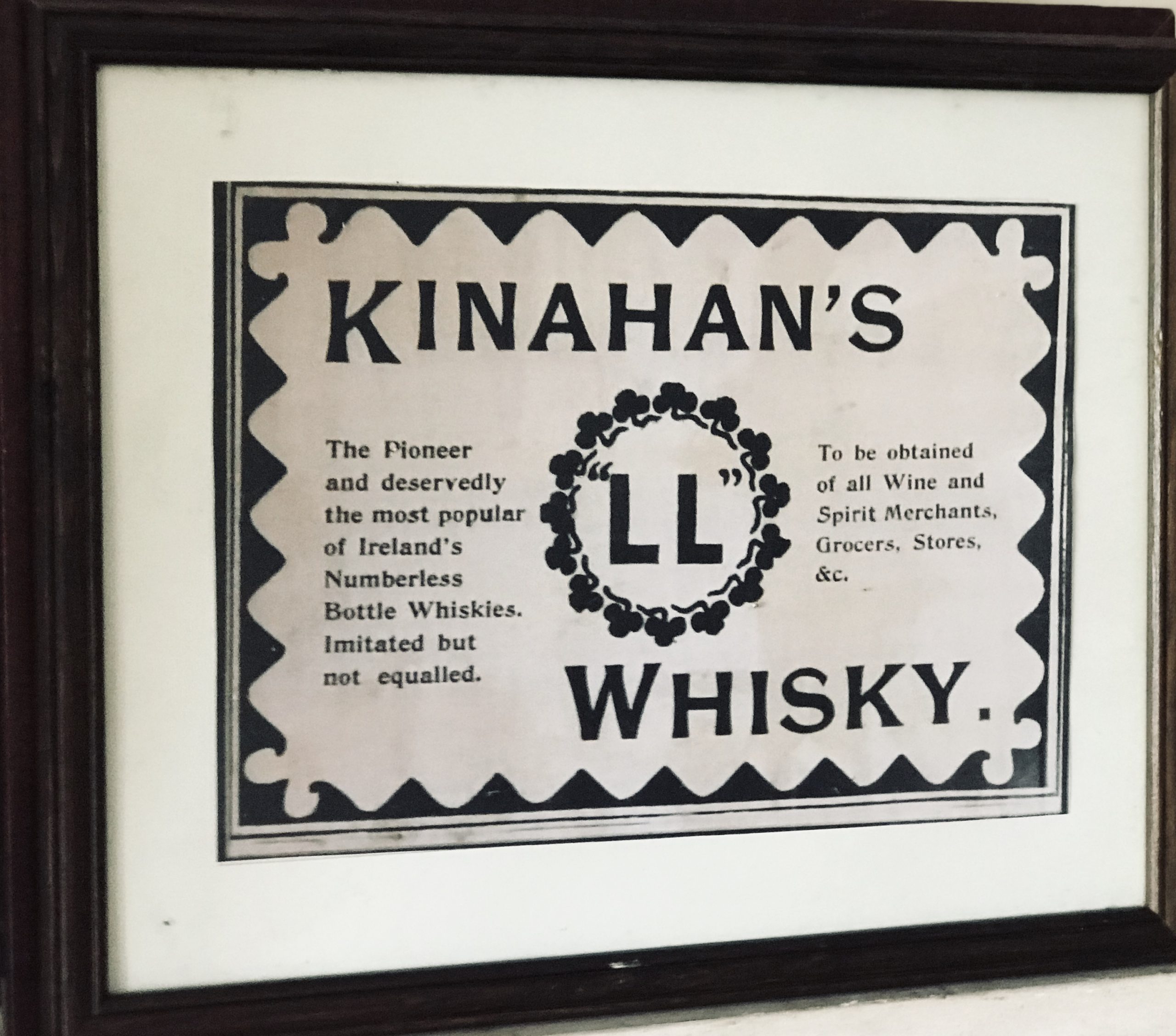