The St. Patrick’s Day Parade is one of New York City’s greatest traditions. On this day, everyone is Irish in the Big Apple!

The Parade marched for the first time on March 17, 1762 – fourteen Years before the Declaration of Independence was adopted and today it is the largest Parade in the World.

Often regarded as the most popular parade in New York City, the Parade is the largest and most famous of the many parades held in the city each year.

The Parade starts at 44th Street at 11 am and is held every March 17th except when March 17th falls on a Sunday; it is celebrated the day before, Saturday the 16th, because of religious observances. The parade marches up Fifth Avenue past St. Patrick’s Cathedral at 50th Street all the way up 79th Street, where the parade finishes around 4:30 – 5:00 pm

To this day, the St. Patrick’s Day Parade remains true to its roots as a true marchers Parade by not allowing floats, automobiles and other commercial aspects in the Parade. Every year the Parade Committee hosts the 150,000- 250,000 marchers, along with many great bands; bagpipes, high school bands and the ever-present politicians in front of the approx 2 million spectators lining Fifth Avenue. The Parade is televised for four hours on WNBC Channel Four to over half a million households and was web streamed live for the first time in 2008. Today, the coverage has expanded to seven additional internet based platforms and can easily be viewed on mobile devices.

The first St. Patrick’s Day Parade in New York was held on lower Broadway in 1762 by a band of homesick Irish ex-patriots and Irish military serving with the British Army stationed in the American colonies in New York City. This was a time when the wearing of green was a sign of Irish pride and was banned in Ireland. The parade participants reveled in the freedom to speak Irish, wear green, sing Irish songs and play the pipes to Irish tunes that were very meaningful to the Irish immigrants who had fled their homeland.

For the first few years of its existence, the parade was organized by military units. After the war of 1812, the Irish fraternal and benevolent societies took over the duties of hosting and sponsoring the event. Originally, the Irish societies joined together at their respective meeting places and moved in a procession toward Old St. Patrick’s Cathedral in Lower Manhattan on Mott & Prince Streets where the Archbishop of New York would then address the crowd before revelers dispersed to celebrate.
Around 1851 the individual societies merged under a single grand marshal and the size of the parade grew sharply. This was when the “Irish” 69th Regiment began to lead the marchers and the Ancient Order of Hibernians became the official sponsor. In the early 90’s, the Parade was attacked for its traditional values and in the resulting lawsuits the organizers rights were up held all the way to the US Supreme court. In 1992 the National AOH directed all AOH organizations to form separate corporations to run events such as the Parade. The Parade is run today by members of the AOH under a separate corporation, St Patrick’s Day Parade Inc.

Since the first Parade, 257 years ago, the Parade today is still escorted by a unit of soldiers; and for the past 165 years “The Irish Infantry” National Guard 69th Regiment have led the Parade up Fifth Avenue, and they are followed by the various Irish societies of the city, the thirty two Irish county societies, and various schools, colleges, Emerald Societies, Irish-language, and Nationalist Societies.

The 2002 parade was dedicated to the ‘Heroes of 9/11, ‘ honoring the police, fire and all rescue workers. At midday, the entire parade paused for two minutes, the Parade at that time stretched one and a half miles and the entire Parade turned around and faced South towards the “TWIN TOWERS” as the Cardinal said a prayer for all the victims of 9/11. This was the first time in history, in the City that never sleeps, one could hear a pin drop on Fifth Avenue, a fitting tribute to the men and women who lost their lives on that fateful day in 2001.

The 2002 Parade was the largest Parade to date with an estimated 300,000 marchers and three million spectators lining Fifth Avenue. This was the first time in history; the President of Ireland reviewed a St. Patrick’s Day Parade outside Ireland on March 17th. 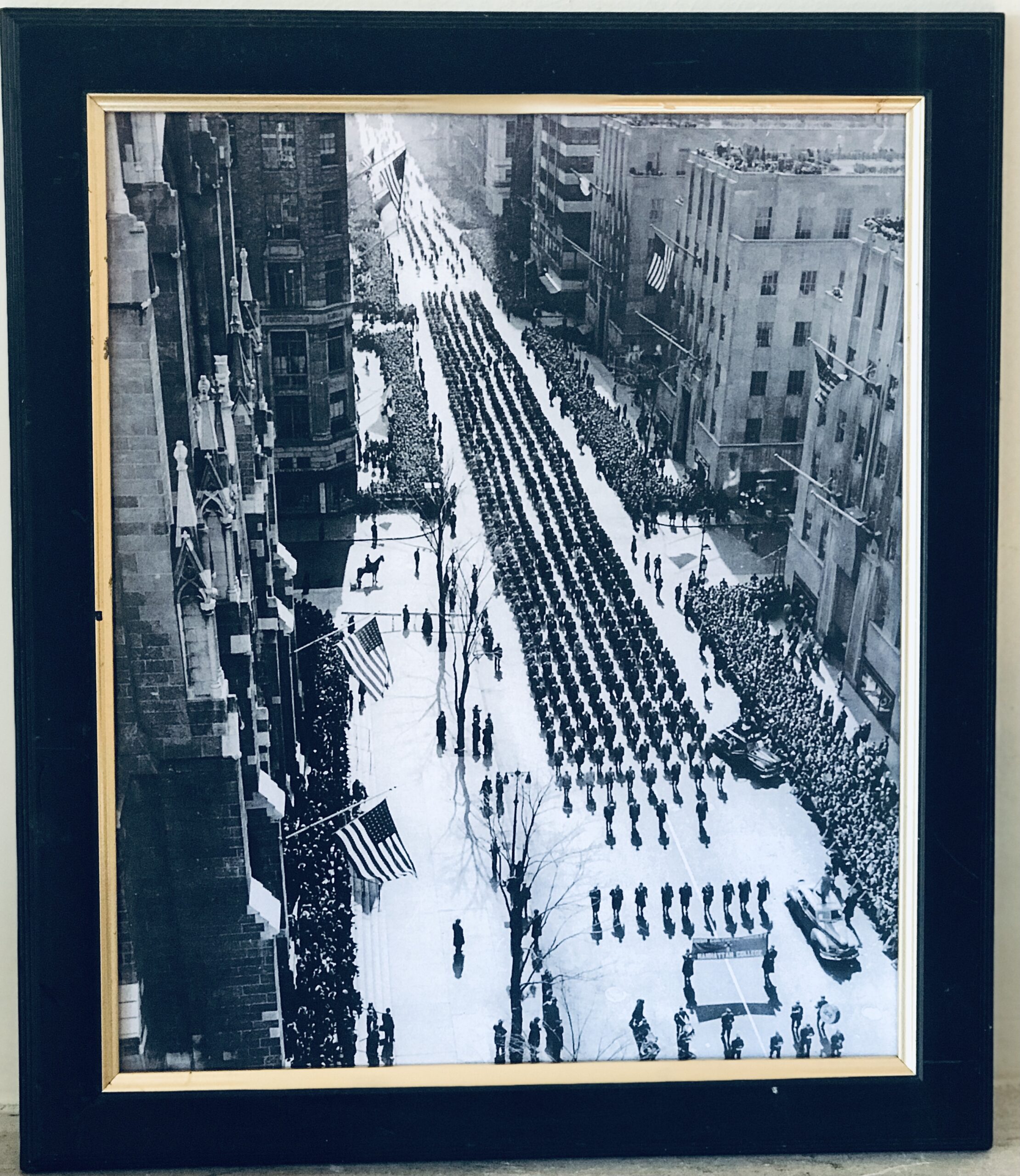 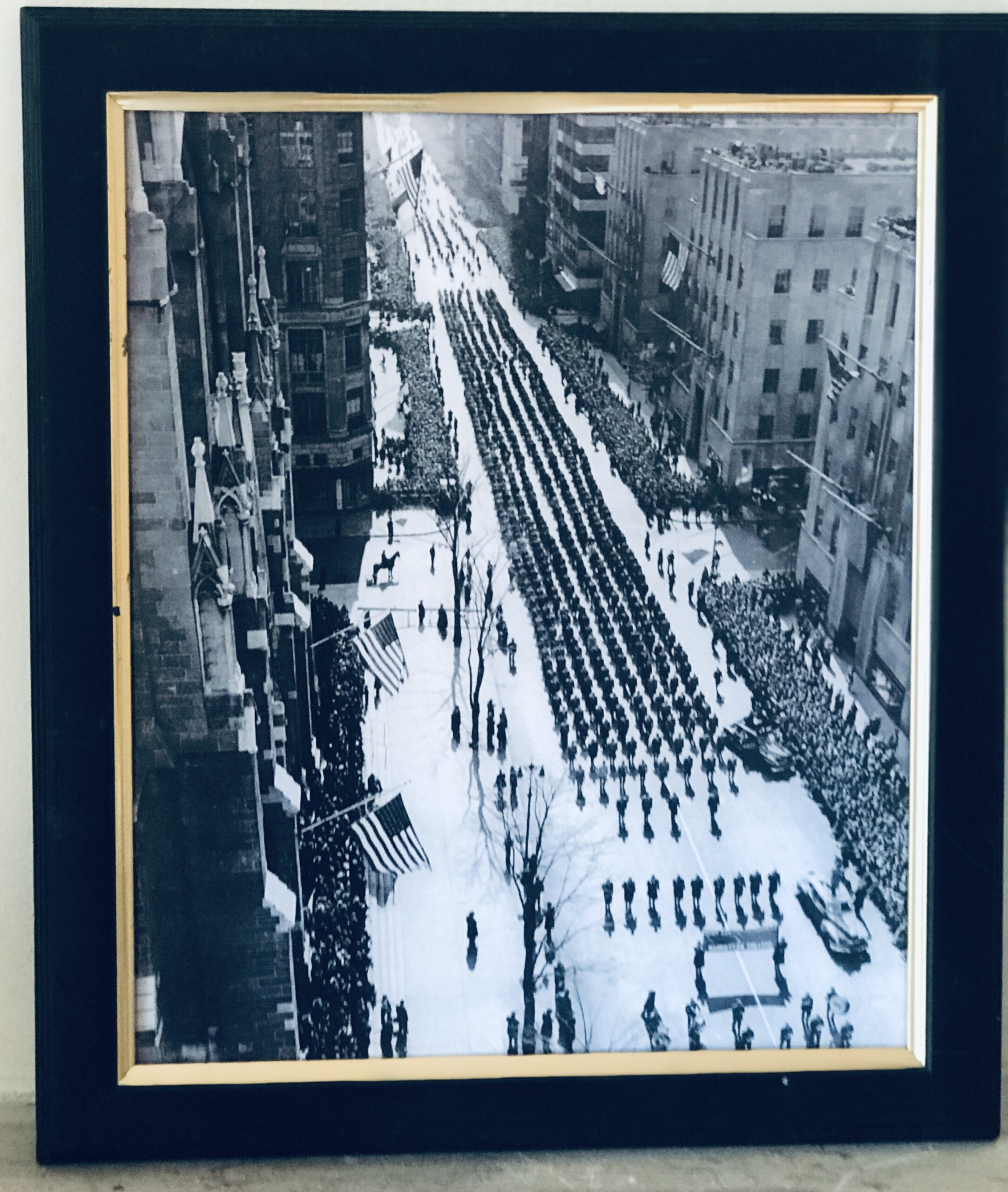 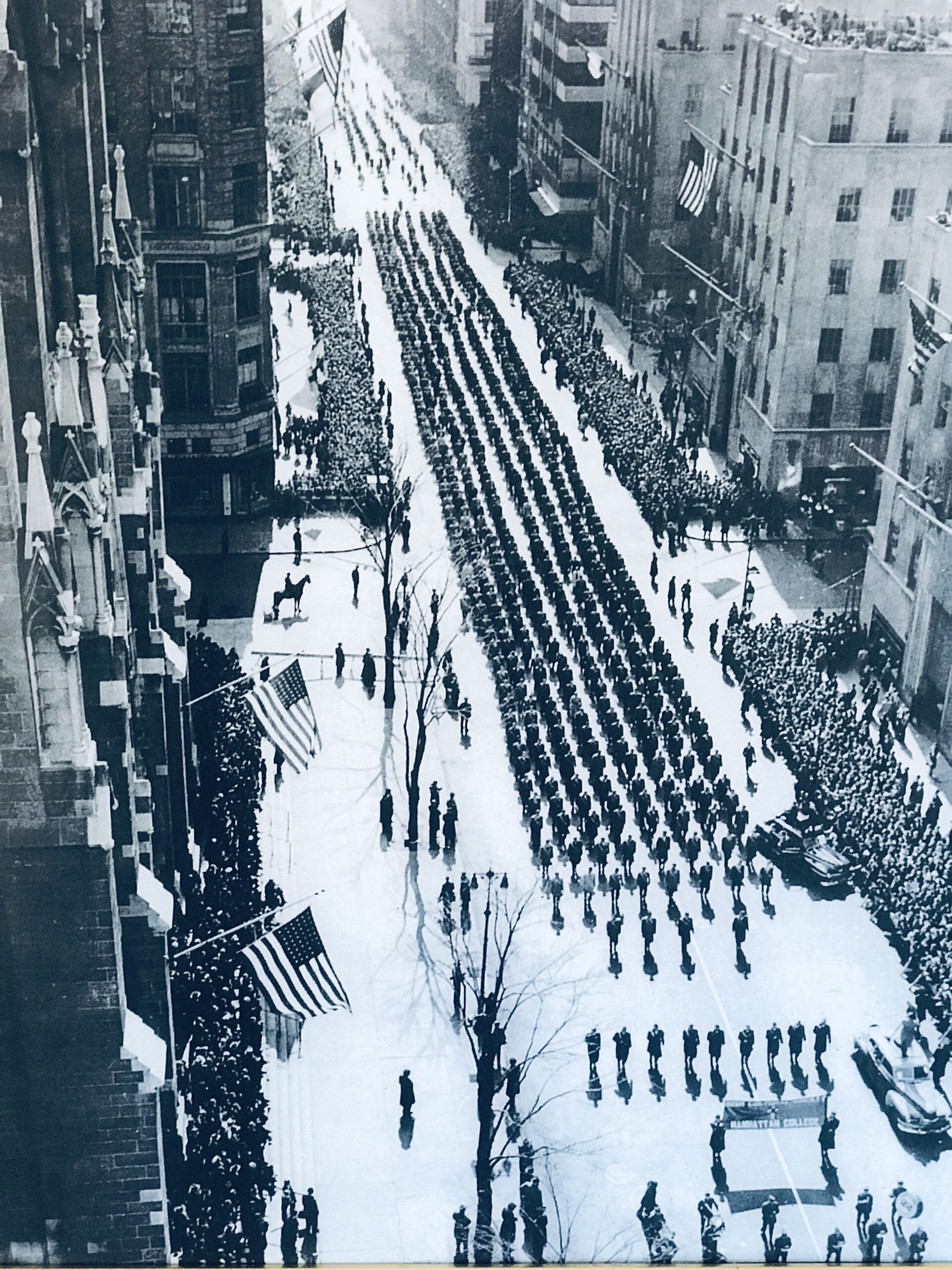 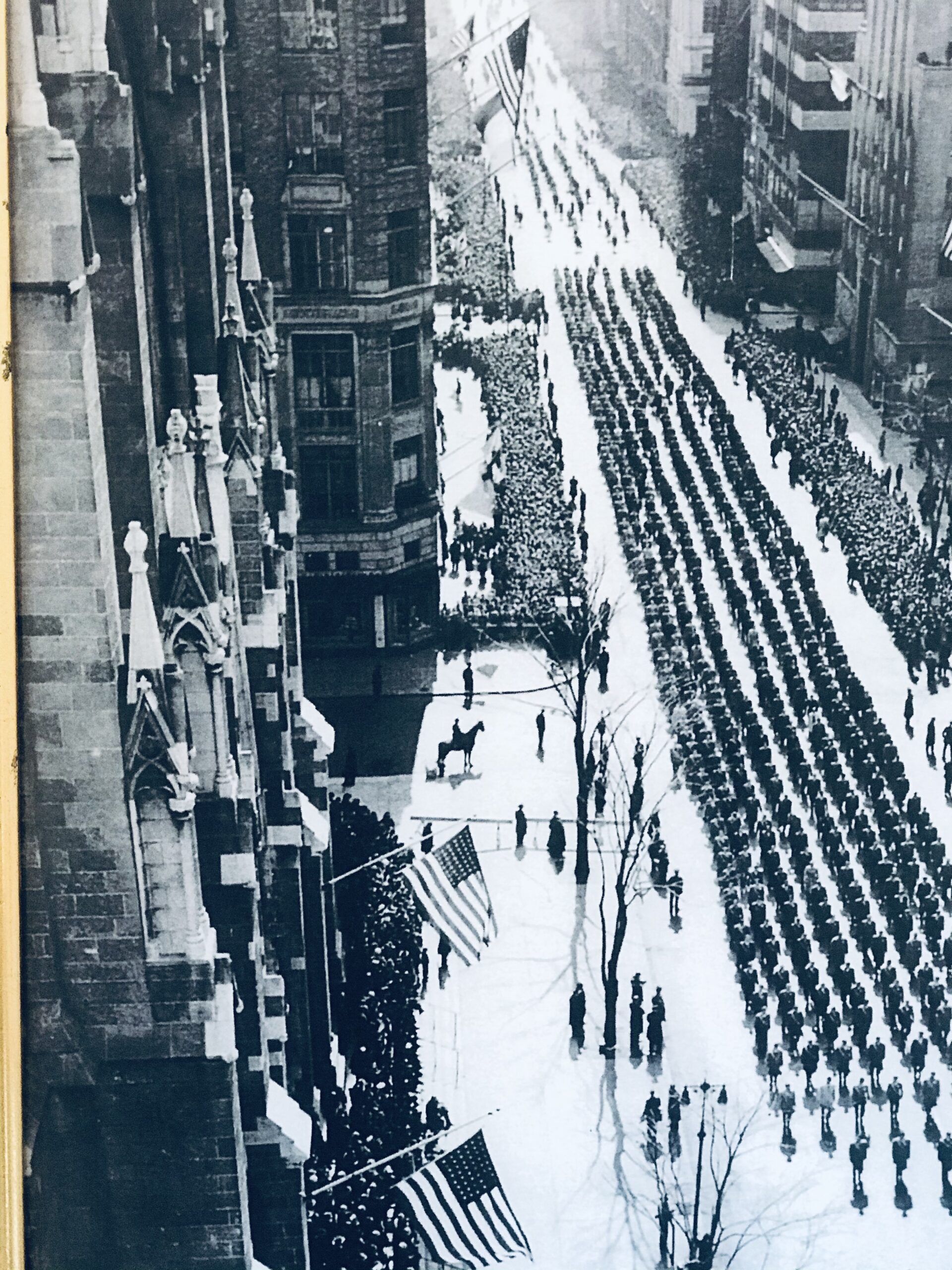 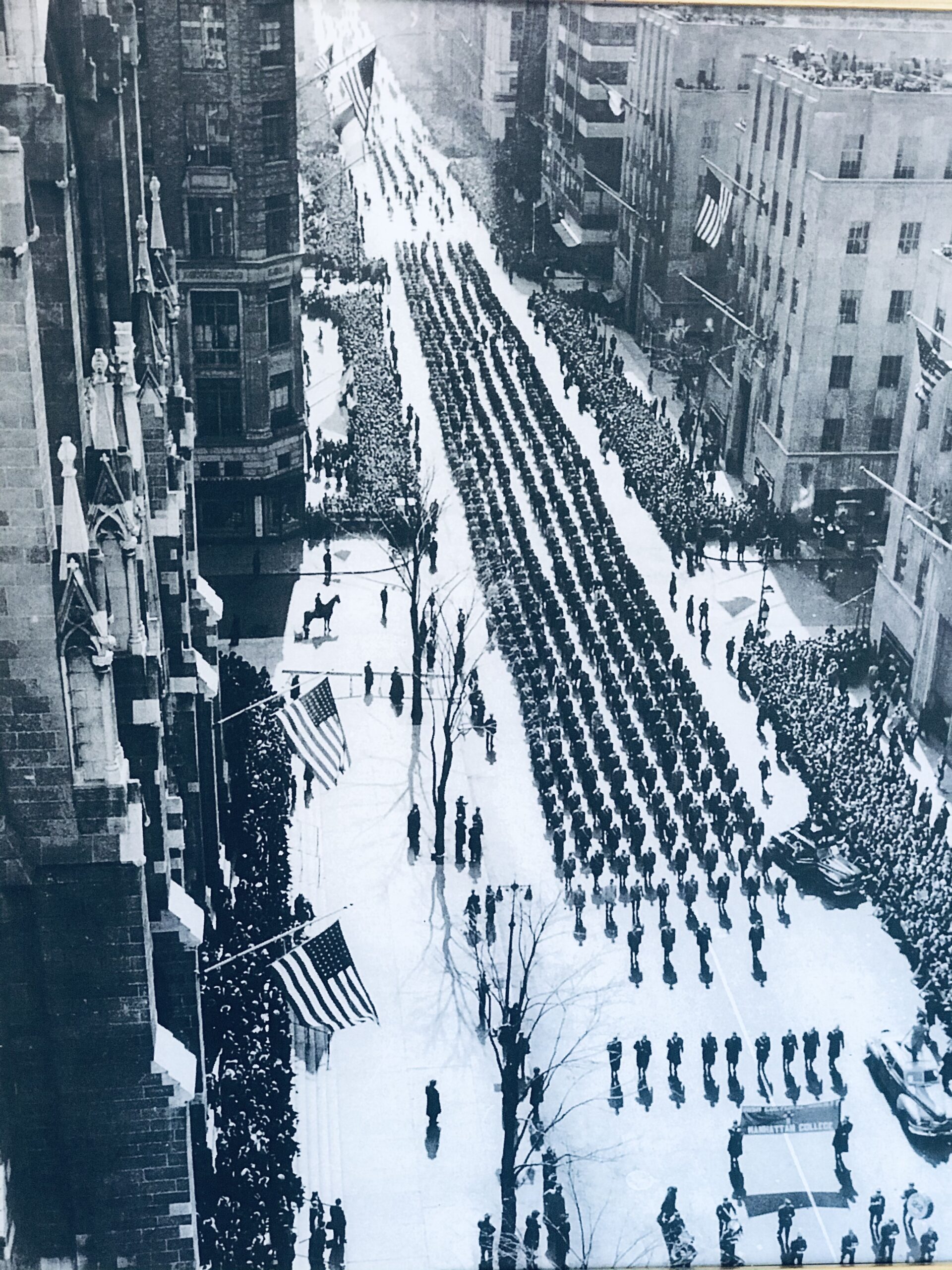